Russian liberalism in the era of Alexander III 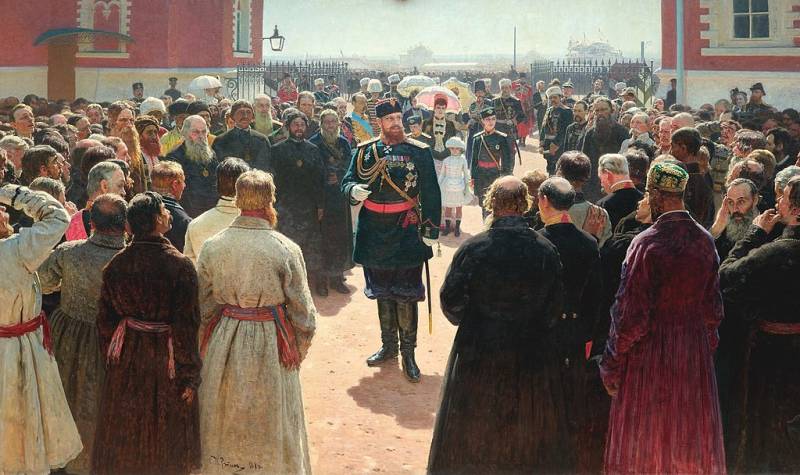 Reception of volost elders by Alexander III in the courtyard of the Petrovsky Palace. Painting by I. Repin (1885-1886).

History Russian liberalism. Today we continue our acquaintance with Russian liberalism during the thirteen-year reign of Alexander III. What era was it? It is usually called the time of counterreforms, when the Pobedonostsev extended the "owl's wings" over the country. But Witte is also remembered in an amicable way, as well as his peaceful foreign policy and the introduction of "peasant uniforms" in the army, because of which many of the high-born officers left it. And, of course, we will definitely consider what place liberalism (which became so popular in the past reign) occupied at that time in the history of our country. 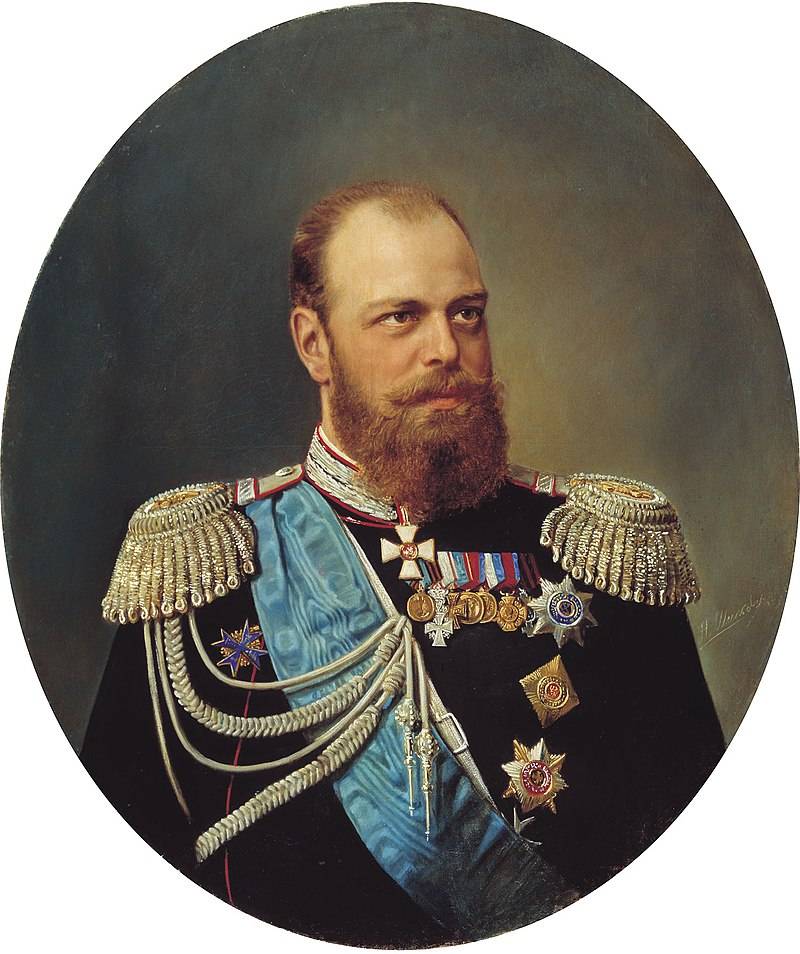 Alexander III in the uniform of the Lb.-Guards. Sapper battalion. Photo by N. Schilder.

First of all, one must imagine that the tragic death of his father, emperor-liberator Alexander II, naturally had a heavy effect on the new sovereign. And, perhaps, precisely because of such difficult experiences, he chose the conservative path of the country's development. And, as in the case of Alexander I, the educator K. Pobedonostsev, a man who at that time was deservedly called the main conservative of the empire, had a great influence on the formation of his views.

Well, having become the sovereign, Alexander III already on April 29, 1881 issued the Manifesto "On the inviolability of autocracy", which was just Pobedonostsev. One of his phrases is particularly noteworthy:

"With faith in the power and truth of Autocratic power, which We are called to establish and protect for the good of the people from any encroachment on it."

Well, for the phrase

“... and to entrust us with the sacred duty of the autocratic government

The text was immediately dubbed the "pineapple manifesto". Only very soon the entire Russian society became convinced that the time for jokes had just passed. 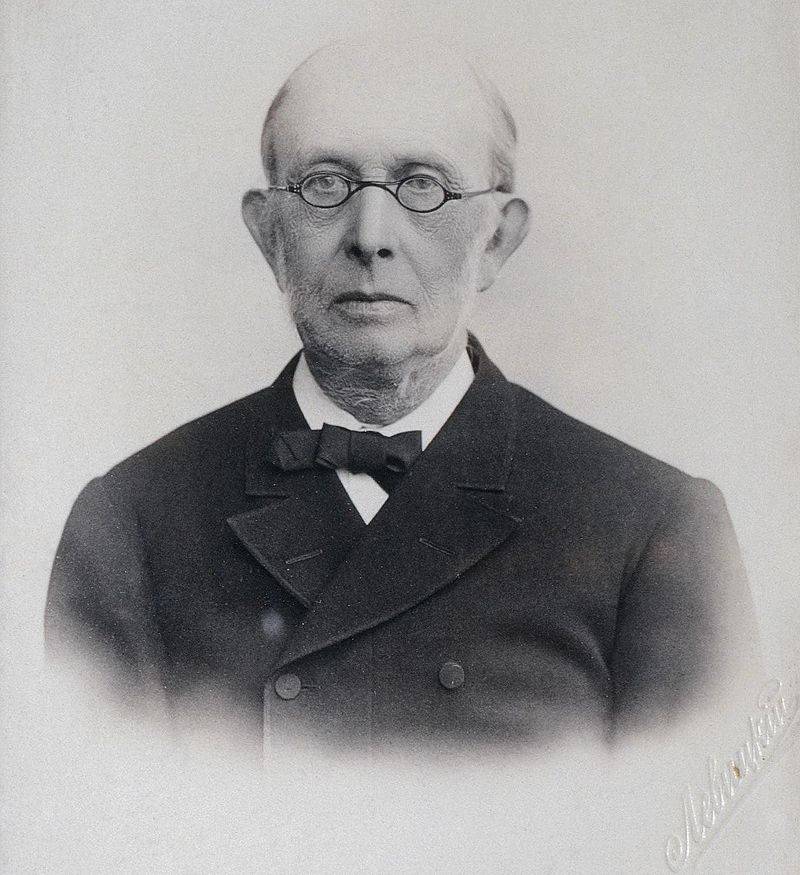 Shouldn't the vertical of power be rigid ?!

Thus, all liberal ministers immediately had to resign. Censorship was tightened, liberal publications were closed down, and a stricter charter was introduced at universities. The terrorists in 1887 were taught a lesson in the execution of the participants in the attempted assassination, among whom was also executed Lenin's brother Alexander Ulyanov.

Further more: the tsar did not like the elective self-government of the zemstvo, and he replaced the elected zemstvo chiefs with those appointed from the nobles and landowners, which increased their loyalty, but certainly worsened the situation in the zemstvos. The magistrates' courts in the counties were canceled, and the competence of jury trials was severely curtailed. That is, the "vertical of power" under Alexander III became much tougher, and the opportunities for liberals to prove themselves in business, respectively, were less.

The russification of the outskirts of the empire was at the forefront, and the Baltic states got the hardest. So, instead of the German language, which was used there in many places since the time of Catherine, Russian was introduced. The German university in the city of Dorpat was transformed into Russian, and the city itself was also renamed Yuriev in 1893. The notorious Pale of Settlement for Jews became much stricter, and their admission to educational institutions was limited.

However, there was no particular oppression of non-Russian peoples in the empire. The same Chukchi and Nenets, as they were getting drunk before him, so they continued to get drunk. Buildings in the characteristic "Russian style" began to be built then everywhere. For example, in my Penza, he built the building of the "Meat Passage", where today there are numerous trade rows of industrial goods, and as a child I went there with my grandmother just to buy meat there. And many years passed before their specialization changed so significantly. 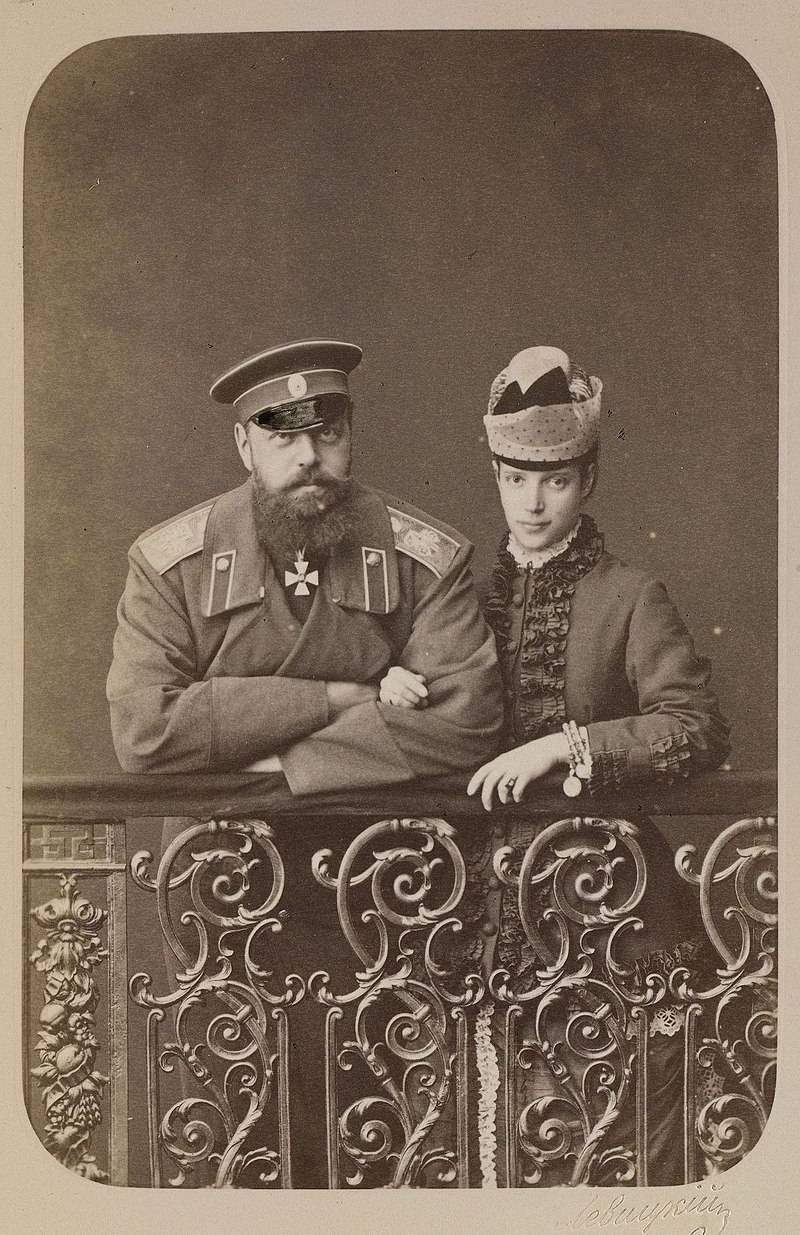 Peacemaker who knew the value of the world

Alexander III tried to maintain peaceful relations with the states surrounding Russia, although he said that she had no allies. He did not like the war, having visited it. And during his reign Russia did not fight with anyone. But the short-sighted rapprochement with France and penetration into Manchuria in the future led to war with Japan and the Triple Alliance.

Domestic industry developed very well under him, for which we should say thanks to his finance ministers (N. Kh. Bunge, I. A. Vyshnegradskii and S. Yu. Witte). As a result, the ruble became a convertible currency (albeit after his death). The country's economy began to rise and even the construction of the Trans-Siberian Railway began - a project that was previously unthinkable and unprecedented. At the same time, it was he who gave the peasants real freedom, since he allowed the former serfs to take solid loans from banks, buy out land and equip their farms. By the way, he also gave civil liberties to the Old Believers, that is, he equated them in the position with all other subjects of the empire.

But the desire of Alexander III to freeze the reform process led to truly tragic consequences, both for the authorities and for the entire society. The fact is that the liberal intelligentsia, having lost faith in the possibility of finding a common language with the government, began to get closer to the revolutionaries more and more actively, which was the opposite consequence of the growing influence of the conservatives around the tsar.

But he was an educated man

There were truly incidents. Thus, the Moscow mayor B. N. Chicherin, during a meeting with the emperor, said:

“Old Russia was a serf, and all the materials of the building were passive instruments in the hands of the master; today's Russia is free, and free people are required to have their own initiative and initiative. Without public initiative, all the transformations of the past reign have no meaning. "

Well, the emperor listened to all this, after which he demanded his resignation ... But he further said also this:

"The current social democracy with its widespread organization, with its hatred of the upper classes, with its desire to destroy the entire existing social order, inevitably leads to dictatorship."
And after all, the emperor was an educated person, he knew the history of the Great French Revolution and how it ended there (before his eyes, a commune was suppressed in Paris). And I still did not understand the wisdom of these words. 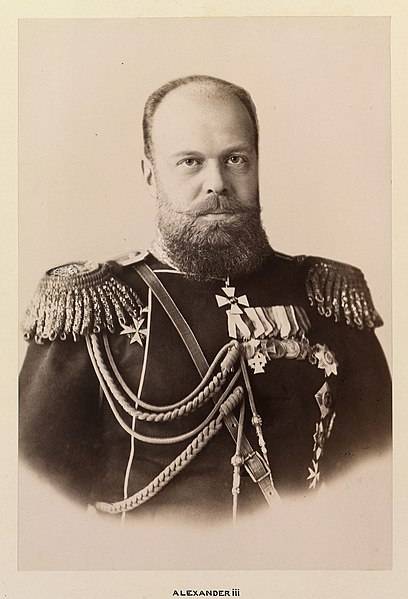 The result of "underground" Russian liberalism

As a result, it turned out that the Russian liberals at the end of the XNUMXth century criticized the actions of the authorities much more often than cooperated with them. And, as a result, the liberals themselves did not call anyone to the barricades, but began to destroy the age-old foundations of the Russian state through the propaganda of their ideas. Such important provisions of liberalism as indispensable respect for the law and for private property, in this struggle began to recede into the background. The goal was to "defeat the enemy", that is, tsarism at any cost and with any allies.

It is clear that the Russian liberals themselves did not throw bombs at the tsar's carriages. Pharmacies (with the words “For the revolution!”) ​​Were not robbed, and when they were arrested after such a robbery they did not shoot the police from the Browning (by the way, such a case actually took place in Penza). But on the pages of the press, they almost approved of such actions. And in university lecture halls, in courtrooms, and even more so in private conversations, albeit with reservations, all this violence was justified.

They did not understand that after the revolutionary emancipation of the masses, no one would wash the floors in their mansions for them, they would not have either servants or cooks. We ourselves will have to heat the stoves and wash the clothes, and with our feet, and not in a cab, stomp on lectures in the "proletarian universities", give lectures to future "red directors". This is precisely the result of the "underground" existence of liberalism.

In Russia at the end of the XNUMXth century, the liberal movement simply did not want to soften the acuteness of all social and political contradictions in the country, but only added fuel to the fire of social conflict. Moreover, in the struggle between the revolution and the reaction, it took the side of the revolution. Well, we know very well how it all ended. Only a few of this "spiritual elite of society" went over to the side of the victorious workers and peasants in Russia. Someone the winners simply finished off in the basement, someone died of hunger, and the majority fled abroad, or they were taken there by the "professorship". 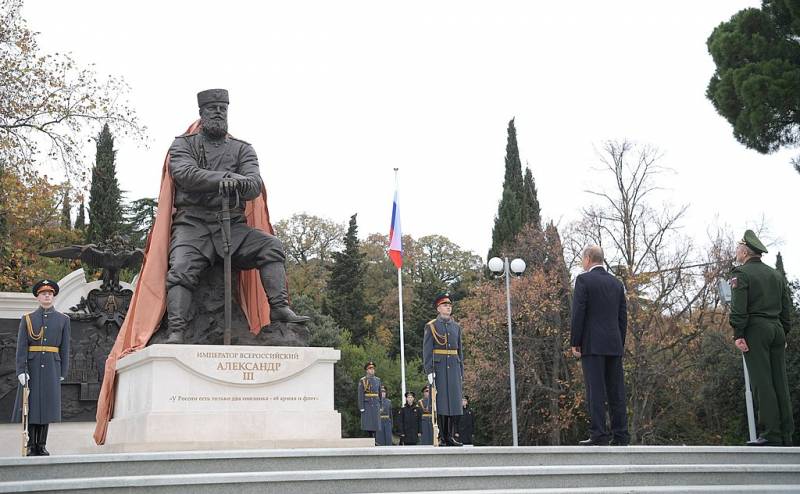 Russian President Vladimir Putin at the opening ceremony of the monument to Alexander III in 2017. Crimea, Livadia Palace Park. Press service of the President of the Russian Federation.

And here is what Klyuchevsky once said about this

However, much in this case also depended on the personality of the Russian monarch himself (the role of personality in history has not been canceled), about which, perhaps, no one spoke better than the historian Klyuchevsky. And he spoke about him like this:

“... this heavy-handed tsar did not want the evil of his empire and did not want to play with it simply because he did not understand its position, and indeed did not like complex mental combinations, which are required by a political game no less than a card game. The shrewd lackeys of the autocratic court easily noticed this and with even less difficulty managed to convince the complacent master that all evil stems from the premature liberalism of the reforms of a noble but too trusting parent, that Russia is not yet ripe for freedom and it is too early to let her into the water, because she I haven't learned to swim yet. All this seemed very convincing, and it was decided to crush the underground sedition, replacing the rural judges of the peace with benefactor fathers, zemstvo bosses, and elected professors appointed directly from the front minister of public education. The logic of the St. Petersburg chanceries was revealed naked, as in a bathhouse. Public discontent was supported by the incompleteness of the reforms or the dishonest, feigned implementation of them. It was decided to bribe the reforms and in good faith, openly admit it. The government directly mocked society, told it: you demanded new reforms - old ones will be taken away from you; you were indignant at the dishonest distortion of the reforms bestowed - here is the conscientious execution of the highest distorted reforms. "
And this is exactly how it was during the reign of Emperor Alexander III. And then Nicholas II came to power. And so he just had to reap the fruits of all the past "imperfections" and unresolved problems of previous reigns, for which he was not ready at all.