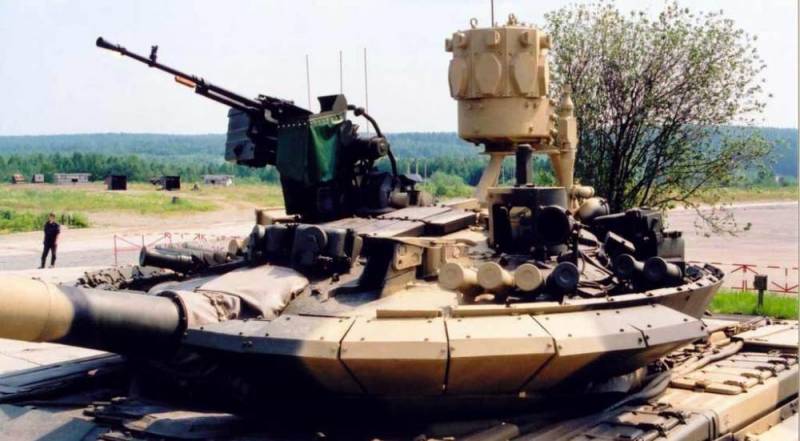 Tower tank with units KAZ "Arena". A radar block is raised above the tower, launchers are located along the perimeter of the dome. Photo of the Ministry of Defense of the Russian Federation

One of the ways to increase the survivability and stability of a modern tank on the battlefield is the active protection complex (KAZ). He must detect dangerous objects and hit them on approach to the tank using special protective ammunition. A whole family of such complexes has been created in our country - "Arena". Products of this line are regularly shown at exhibitions, but have not yet reached the troops. Recently, however, work has intensified, and the latest model of the family may enter service.

According to known data, the last KAZ of the domestic family, the T09-06 "Arena-M", was created at the beginning of the last decade in order to modernize the existing main tanks of all models. In 2013, at an exhibition in Nizhny Tagil, for the first time, they showed a mock-up of such a KAZ installed on a modernized T-72B3 tank. An experienced tank with new equipment has been shown before. Various statements were made, but no plans to put the Arena-M into service were announced.

At the beginning of 2017, the Mechanical Engineering Design Bureau (Kolomna), which developed the Arena series KAZ, announced that such systems would in the future be installed on the T-72 and T-90 MBTs. Moreover, at that time, the T09-06 product was undergoing tests, which were monitored by the command of the ground forces. Details of these events were not disclosed. 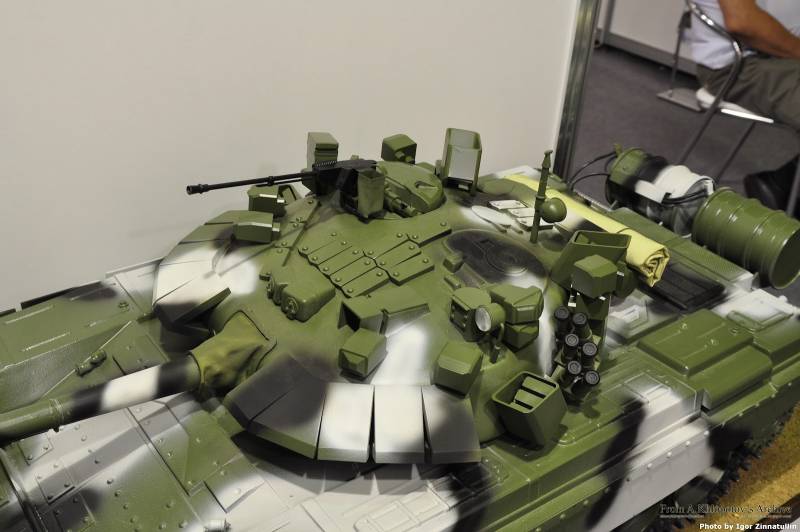 Model of a tank with the "Arena-M" complex. Photo Gurkhan.blogspot.com
In mid-2018, it became known that the Ural Design Bureau of Transport Engineering (part of the NPK Uralvagonzavod) purchased from an unnamed supplier products for the modernization of the T-72B3 tank by installing the T09-A6 active protection complex. The cost of the purchased products amounted to 5 million rubles.

In November 2019, an interesting photograph was made available. It showed a T-72B3 tank with Arena-M KAZ units on the turret. Apparently, the photo was taken during tests at an unknown test site. The appearance of such a photograph was fully consistent with the previous news.

At the end of September 2020, the domestic media published curious information about the development of MBT, obtained from the 38th Research Institute of armored weapons and equipment. It was reported that until 2025 Russian tanks T-72B3M, T-80BVM and T-90M will maintain parity with the main foreign models. After 2025, modernization will be required to improve the basic characteristics. 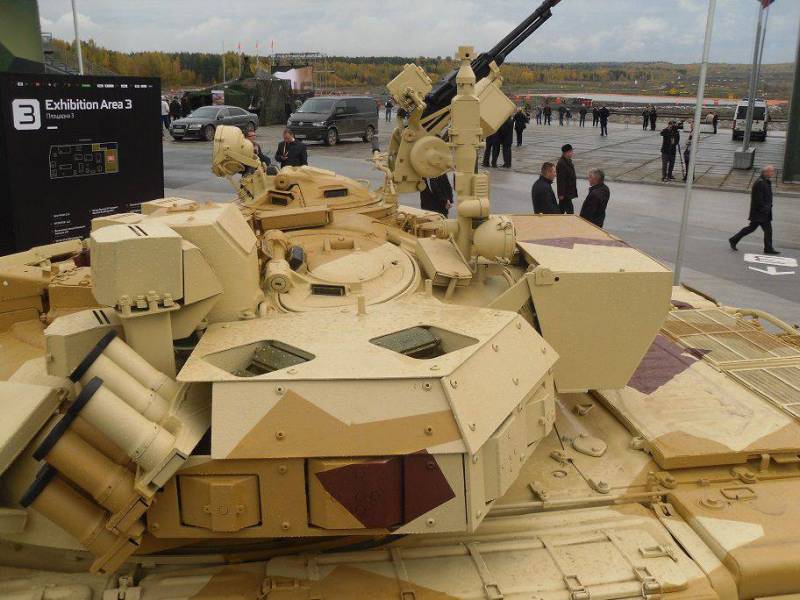 Tank with a mock-up KAZ. Photo Otvaga2004.mybb.ru
Ways to improve the protection of the current MBT are proposed. Thus, it is proposed to equip the T-90M with the Arena-M KAZ. It is also necessary to update the ERA and upgrade other key systems. Details on the implementation of active protection were not reported. It was also not specified whether the KAZ is needed by other domestic tanks.

Thus, in the context of the T09-06 Arena-M project, a specific situation has emerged, which is not yet conducive to optimism. Kolomenskoye KBM has extensive experience in the development of KAZ and for several more years presented another sample of this class. Later "Arena-M" passed tests, the results of which, however, are unknown. Probably, the complex shows the calculated characteristics, which allows the development organization to promote it into the army.

At the same time, the armed forces for a long time did not show a clear interest in the entire direction of KAZ. Over the past several decades, samples of this class have not been able to pass further tests and demonstrations at exhibitions. The reasons for this are simple and understandable. The program of mass production and implementation of the complexes will be very expensive. In addition, it is believed that fragments of protective ammunition threaten infantry and armored vehicles around the tank with KAZ. Over time, doubts arose about the advisability of installing such systems on older tanks. 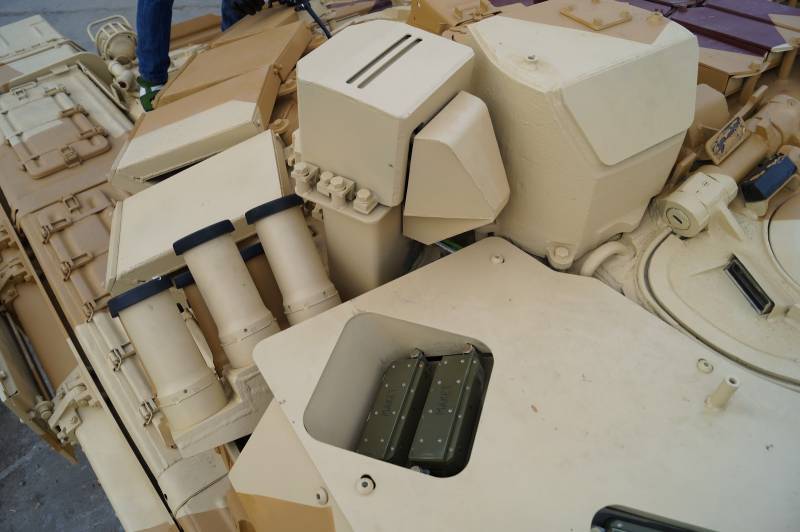 Locator antenna and trigger. Photo Gurkhan.blogspot.com
However, the armed forces do not abandon the KAZ. So, in the project of the promising unified platform "Armata", it was initially required to provide for the installation of a new generation KAZ. As it became known in the recent past, the army considers it expedient to use KAZ on tanks of the previous generation. However, the real prospects for "Arena-M" are still visible only in the second half of the twenties.

It should be borne in mind that the use of KAZ "Arena-M" on the T-90M tank is still only a recommendation of a specialized research institute, developed on the basis of available data and experience. It is unclear whether it will be taken into account when drawing up real technical requirements for a future modernization project.

It should also be recalled that Arena-M can be installed not only on the new T-90M. Back in the early tenths, they showed a variant of its installation on the modernized T-72. Apparently, the T-80 of all current modifications can also be carried by KAZ.

According to known data, KAZ "Arena-M" in its architecture differs from the previous developments of the family, but works on the same principle. It is proposed to install several separate antennas of the radar system and a number of launchers along the perimeter of the tank turret, each of which carries up to 3-4 protective ammunition. Control automation is mounted inside the fighting compartment. 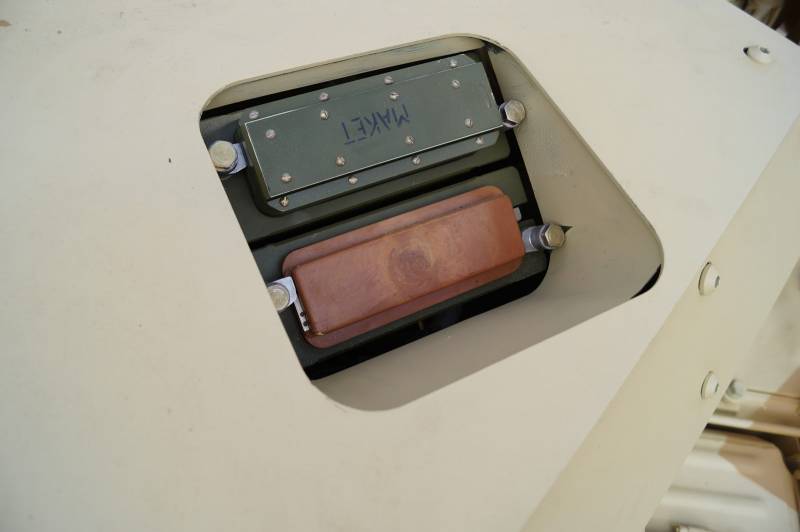 Launcher with dummy ammunition. Photo Gurkhan.blogspot.com
In the course of work, KAZ locators automatically scan the surrounding area and track the appearance of potentially dangerous objects. In the event of a missile or projectile flying in the direction of the tank, the automation should launch a protective ammunition. At a given distance from the tank, it detonates and strikes the projectile with a directed stream of fragments.

The exact characteristics of the Arena-M KAZ have not yet been published. The previous sample with a different layout of components could provide all-round protection of the tank in a sector with an elevation angle from -6 ° to + 20 °. The range of destruction of an approaching ammunition reached 50 m. The operating speed was from 50-70 ms. Probably, the modernized complex has similar parameters or exceeds its predecessor.

The organization-developer previously claimed that the "Arena-M" could easily cope with the defeat of the anti-tank missile complex BGM-71 TOW. This product develops a speed of up to 280 m / s in flight and is capable of maneuvering, which makes it difficult to intercept. It can be assumed that the new Russian KAZ will cope with other missiles showing similar flight characteristics. 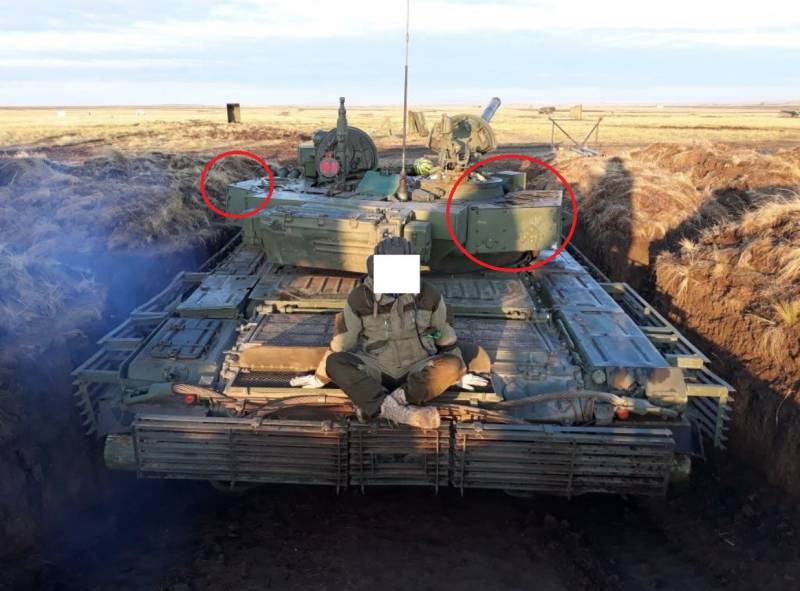 T-72B3 with KAZ "Arena-M" (launchers are marked in red) at the test site, 2019 Photo Bmpd.livejournal.com
The Arena-M complex has several important advantages over the previous products of the family. First of all, this is the novelty of the KAZ as a whole and its individual components. Changing the architecture of the complex and dividing its funds into several separate blocks simplifies the retrofitting of tanks. In addition, the components do not significantly affect the dimensions of the tank and do not interfere with access to the crew's workplaces.

In recent decades, the topic of active protection has received special attention from the leading countries of the world, and noticeable results are already taking place. In some countries, KAZ has been developed and adopted for armament for MBT and other armored vehicles. The Russian army is still lagging behind in this regard: new systems are being developed and tested, but they have not yet entered service.

However, there are reasons for restrained optimism. The Russian army understands the need to increase the level of MBT protection by all available methods. This understanding has already affected the development of promising armored vehicles on the Armata platform, incl. tank T-14. The further development of other types of MBT, most likely, will also not do without KAZ - although this will happen later.

Thus, after several decades of waiting, the situation may change. The units will simultaneously serve completely new tanks, initially carrying active protection, and updated armored vehicles from the presence, additionally equipped with such means. The level of protection of the main tanks will increase, and with it the combat capability of the ground forces will also increase. However, all such measures are still a matter of the future - although we would like to resolve this issue as soon as possible.