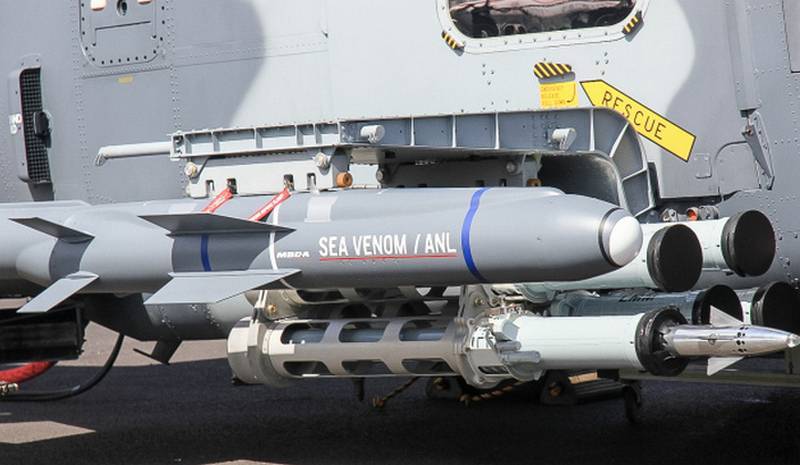 The French Navy and the Royal Navy of Great Britain received the new Sea Venom air-launched anti-ship missile. This was reported by the press service of the MBDA consortium, which developed the new ammunition.

Sea Venom ("sea poison") - subsonic anti-ship missiles "hundred-kilogram class", designed to be launched from helicopters. Due to the presence of a warhead with an infrared guidance system, it can be used to destroy various types of surface and ground targets.

The missile, after separation from the carrier, includes an uncooled thermal imaging seeker developed by Safran with advanced image processing (with the possibility of integrating an additional channel for laser semi-active homing) and a two-way communication channel for involving the operator in the control loop.

It has several autonomous flight modes, including flight at extremely low altitude above the sea surface. In addition, there is an operator control mode with which you can re-target the missile during flight, correct the aiming point or safely terminate the mission.
Ctrl Enter
Noticed oshЫbku Highlight text and press. Ctrl + Enter
We are
Great Britain and France are armed with "sea poison"MBDA Missile Systems will complete the development of FASGW-ANL RPC
Military Reviewin Yandex News
Military Reviewin Google News
18 comments
Information
Dear reader, to leave comments on the publication, you must sign in.