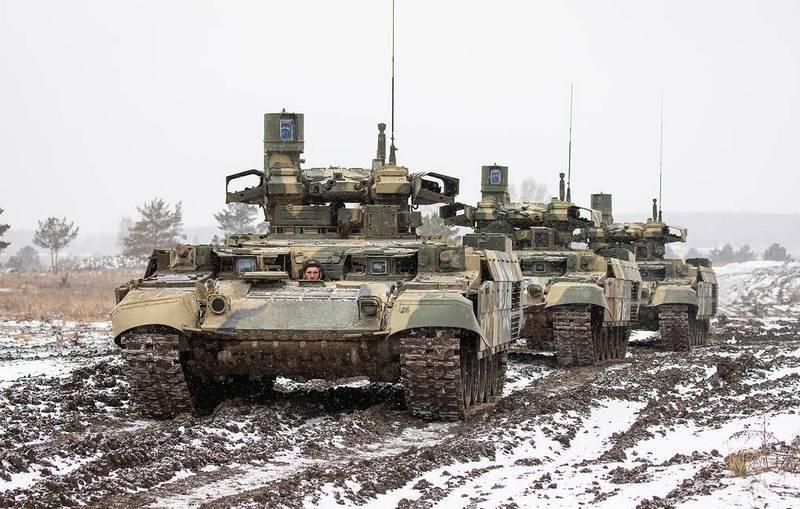 
According to the report, eight BMPTs entered the 90th Panzer Division, stationed in the Chelyabinsk region, for trial operation. Currently, the formed crews are undergoing retraining to work on new equipment, they are assisted by representatives of UVZ.

It is noted that this is the first delivery of BMPTs under the state defense order.

Tank support combat vehicles produced by Uralvagonzavod entered the 90th Guards Tank Vitebsk-Novgorod twice Red Banner Division of the Central Military District. This is the first delivery of BMPTs to the Russian Armed Forces as part of the execution of the state defense order. In terms of its combat effectiveness, one BMPT will replace 2 BMPs and a motorized rifle platoon
- reported in the press service of Uralvagonzavod.

Earlier, the Ministry of Defense said that the decision on the place of the BMPT in the Ground Forces would be made following the results of the Kavkaz-2020 strategic command and staff exercises.

BMPT "Terminator" is made on the chassis of the T-72. The vehicle is armed with two 30mm 2A42 automatic cannons, a 7,62mm PKT machine gun, and four launch containers for the 9M120 guided missiles (Attack complex).

Ctrl Enter
Noticed oshЫbku Highlight text and press. Ctrl + Enter
We are
Reports from the militia of New Russia for 27-28 September 2014 of the yearDecember 2010 years. Russian March. Senseless and merciless? Notes not a Russian person
Military Reviewin Yandex News
Military Reviewin Google News
111 comments
Information
Dear reader, to leave comments on the publication, you must sign in.