Where did the coats of arms and the science about them come from?

December 3 2020
231
Knowledge of heraldry very often helps us to figure out who or what exactly is depicted in certain ancient manuscripts or on sculptures ... 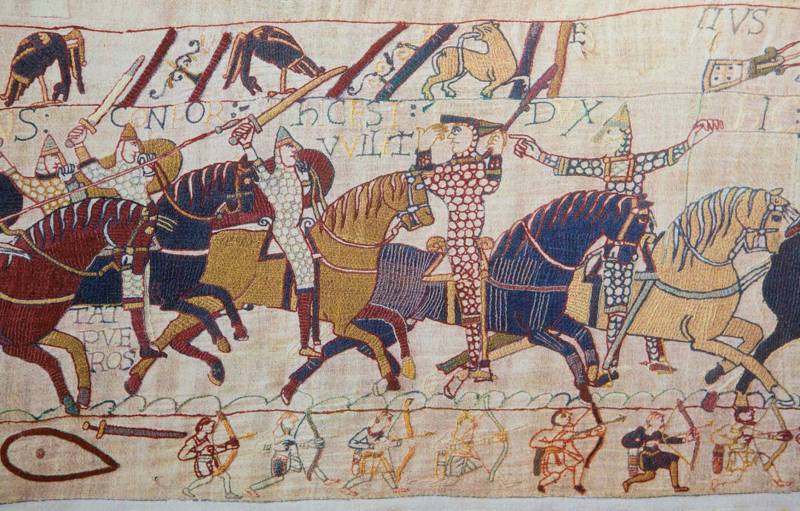 Heraldry arose primarily out of necessity. It was necessary to somehow identify the warriors on the battlefield, dressed in almost the same armor. So on the battlefield at Hastings, Duke William the Conqueror even had to take off his helmet so that his soldiers could recognize him! (Tapestry from the Museum in Bayeux, Normandy)
Tuhar replied: “O lord,
You see the leader of the squad,
Swift Tusa commander,
Which to death in terrible battles beats.
A little further - another fire burns,
And the sun is painted on it.
Under the banner, looking light and proud,
Glorious Fariburz, your uncle, rushes
Behind him Gustachm and knights are visible,
And a banner with the image of the moon.
Slave, like a pearl is light,
Whose silk braids are like resin
Drawn beautifully on the banner
That is the military banner of Bijan, son of Gibe,
Look, on a leopard there is a head,
What makes the lion tremble.
That shidusha warrior-grandee
What marches, on a mountain range similar.
Here is Huraz, in his hand is a lasso,
The boar is depicted on the banner.
And here is Gudarz, the gray-haired son of Kishwada.
On the lion - sparkling gold.
But on the banner - a tiger that looks wildly,
Rivniz-warrior is the lord of the banner.
Nastukh, Goodarza son, enters into battle
With the banner where the doe is drawn.
Bahram, Gudarza son, fiercely fighting,
Depicts his argali.
Talking about everyone - not enough a day
I don't have enough words worthy! "
("Shah-name" by Hakim Abulkasim Ferdowsi)

Coats of arms and heraldry. For a long time I wanted to talk about heraldry, but somehow everyone “didn’t reach” this topic. But recently I re-read one comment (that since there is a crescent moon on the banner, it is certainly Muslims) and realized that we cannot do without "enlightenment" in this area. Well, I'll start again with memories of how my interest in coats of arms and heraldry awoke. 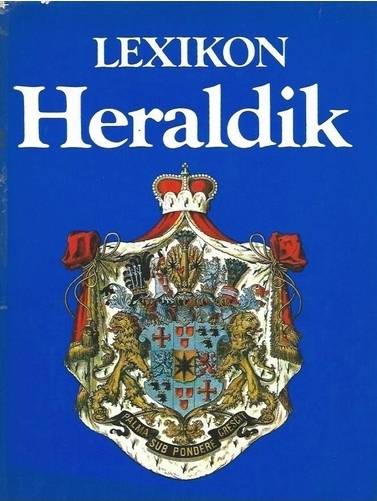 "Dictionary of Heraldry" by Hert Oswald
And it so happened that somewhere in the mid-60s of the last century I subscribed to the magazines "Pioneer" and "Koster". And in one of them there was an excellent article on coats of arms and heraldry, illustrated with both black and white and color drawings on the back page of the cover. I liked her well, I just don't know how. Moreover, it was written in a very simple, understandable language, and even on such an interesting topic. At the end, a task was proposed: draw the coat of arms described in it and explain to whom this coat of arms could belong.

And there was this: in the scarlet head of the shield there is a golden lion, and in the azure field there are three ships. And I really wanted to participate in this competition, but hesitated. No, there were painted both the basic rules of heraldry, and how some figures should be placed. But this alone (to make the coat of arms correctly) was not enough, which I later became convinced of.

Several issues in a row in the magazine were printed emblems sent by the guys and their mistakes were sorted out, and as a result, the editorial board gave its own version of the emblem. Only he was wrong, as I now understand it. The lion was painted there as "from the zoo." And he had to be elongated, long-bodied: either "reclining" or walking, that is, a "leopard" lion!

But then I did not know this, I just gradually became interested in heraldry. Moreover, two books played a special role in the development of this interest. These are the German-language "Dictionary of Heraldry" 1984 by Hert Oswald and the English-language book "Heraldry. An Illustrated Encyclopedia "by Stephen Slater, 2002, fortunately, then translated into Russian in 2006. 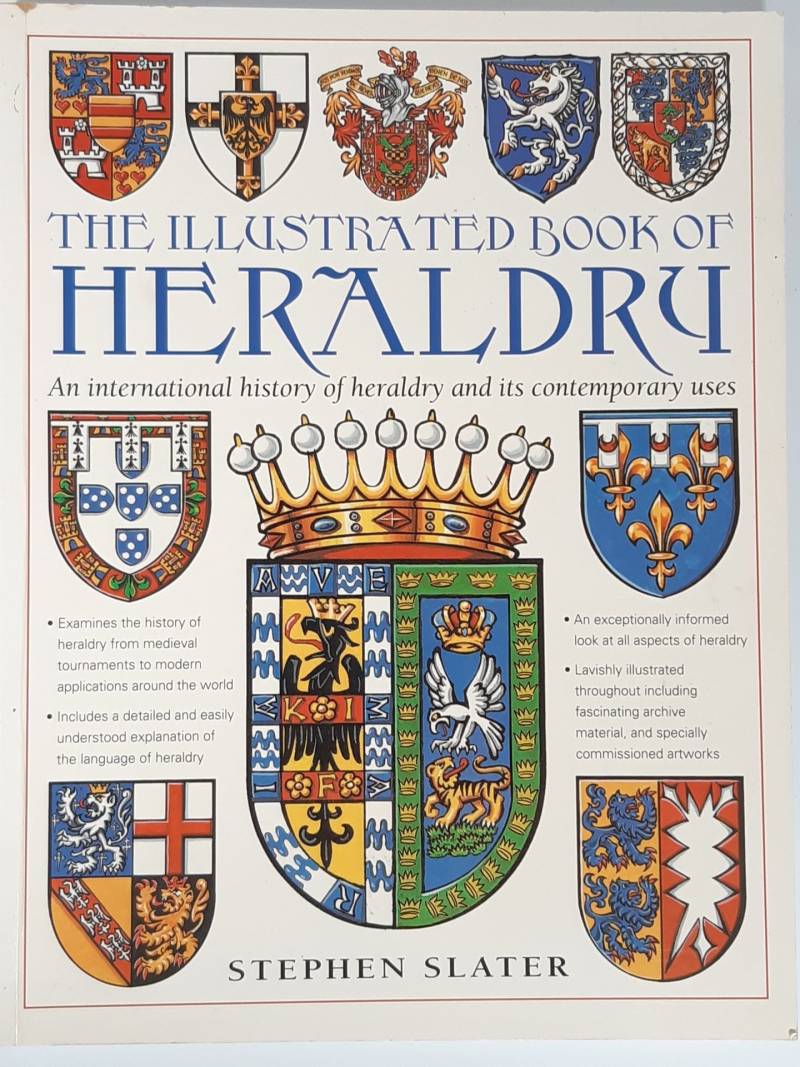 "Heraldry. The Illustrated Encyclopedia by Stephen Slater
Well, now, after such a "preface" and a brief historiography, you can proceed, in fact, to the story of the coats of arms. And, in my opinion, it is necessary to start (which, by the way, neither Oswald nor Slater did!) With Ferdowsi's poem "Shah-name", which he, as you know, finished in 1011.

And there we can read descriptions of the flags of famous warriors, on which characteristic and only images used by them were already embroidered: the sun, moon, lion and tiger, wild boar and even a beautiful slave. That is, at that time it was already customary for the warriors of the East to distinguish each other by such emblems! True, these emblems were not depicted on shields, and were not inherited. Although, perhaps, they were transmitted, we just do not know for certain. That is, both knighthood itself and the custom of using various images on banners as emblems for identification, all of this came to Europe from the East and most likely through Constantinople. 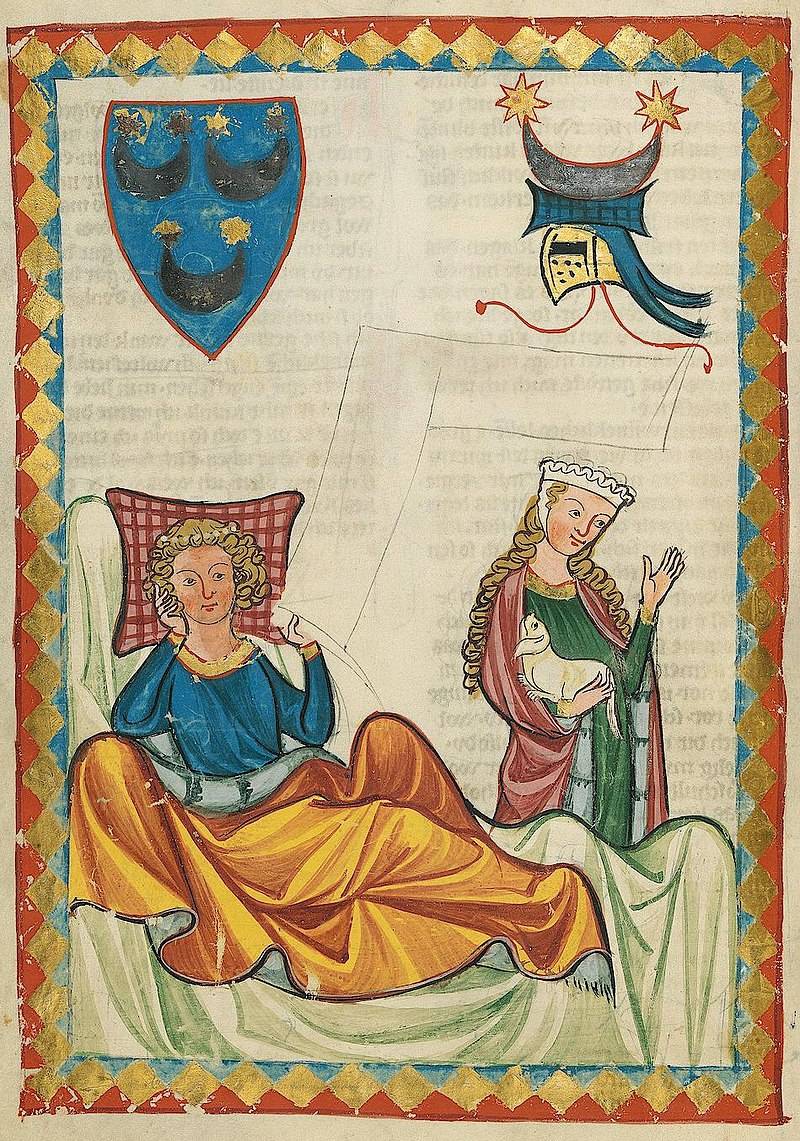 A very interesting coat of arms, the symbolism of which will be discussed later. The main thing is that it belonged to Heinrich von Morungen - a German poet (and it is clear that a Christian) of the early Minnesang period, who died in 1222 (Miniature from the Codex Manes, 1305)
Now let's fast forward to Europe in 1066 for more of the Battle of Hastings and see what was depicted on the shields of the warriors of Duke Guillaume / William / William Bastard (he received the nickname Conqueror a little later than this battle itself!) And King Harold. The most common was the image of a cross with wriggling rays, but on Guillaume's shield, the cross was straight, but with expanding ends. The winged dragon is also found in warriors, but much less often. During the battle, there was a rumor that Guillaume was killed, and he had to take off his helmet with a nosepiece. And Count Eustace of Bologna, so that the soldiers of his Guillaume knew, needed to point his hand at him:

Shields on the Battlefield of Hastings (Tapestry from the Museum in Bayeux, Normandy)
That is, by this time, the standardization of military equipment in Europe led to the fact that the warriors from head to toe, dressed in chain mail hauberks and highways, and their faces were covered with helmets with nose pads, became almost impossible to identify on the battlefield. However, much later the soldiers still did not have any coats of arms on their shields.

Figure of a knight from the pediment of a cathedral in Wales. The shield is embossed and clearly does not bear any coat of arms
Note. Umbo (lat. Umbo "protrusion, bulge") is a hemispherical or conical metal plate-patch, placed in the middle of the shield, protecting the warrior's hand from blows piercing the shield. Under the umbon there is often a handle by which the warrior holds a shield.

Another figure from the pediment of the same cathedral. Here the shield is absolutely smooth. Of course, one can assume that these figures had to sign. However, this is unlikely. After all, they are outside, not inside, and everyone should have understood that because of the English weather, they would have to be tinted regularly!
So, thirty years after the Battle of Hastings, Western European soldiers ended up within the walls of Constantinople, and it was then that the Byzantine princess Anna Comnina (1083ꟷ1148), who saw them, wrote in her "Alexiada" (as she called her diary) that the shields of the Frankish warriors were in the highest degrees smooth, shimmered with a convex ornament of cast brass, and even sparkled in the sun. She really liked these shields, but she did not write anywhere that, in addition to patterns, they had at least some figures or emblems that we could today consider heraldic. That is, the knights of Europe who went on the first crusade (1096-1099) did not have any coats of arms on their shields. 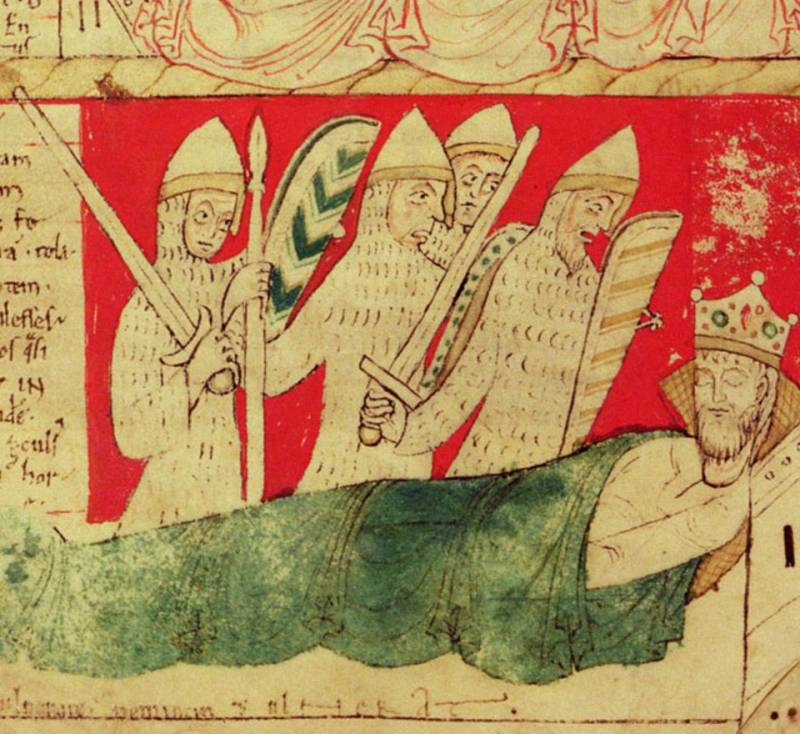 "The Dream of Henry of England". The Chronicles by John Worchester (British Library)
But we have a drawing in the Chronicle manuscript of the English historian and chronicler John Worcester (Wikipedia, by the way, calls him John of Worcester), which depicts a nightmare that King Henry I of England sees, where he is surrounded by soldiers with swords in their hands, eager for his death. And now pay attention: shields and they are decorated with patterns. But very soon they will also become heraldic symbols. 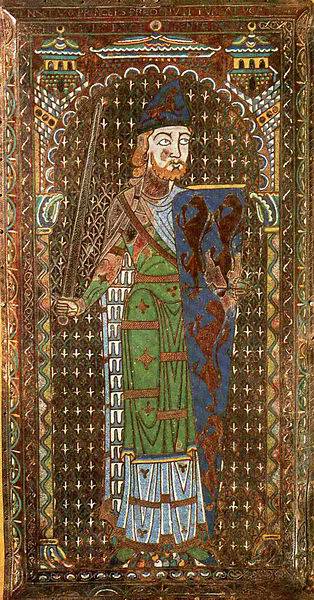 Enamel effigy (sculptural tombstone) of the Count of Anjou from the cathedral at Le Mans. (Museum of Archeology and stories Le Mans)
But then it happened that in 1127 (or 1128) King Henry I took it into his head to make his son-in-law Geoffroy Plantagenet, Count of Anjou, a knight. And (as reported by John Marmoutier, the author of the chronicle of his reign), in honor of this event, give him a blue shield, the surface of which was decorated with golden lions, standing on their hind legs. After his death, this shield began to adorn his magnificent enamel effigy (sculptural headstone) in the Cathedral of Le Mans. True, the mention of this gift dates back 30 years after the event itself.

Effigia (sculptural tombstone) of William Longspey Jr. from Salisbury Cathedral, 1250. But his entire shield surface is smooth again. It can be seen that he has not yet earned a coat of arms for himself, but he could not claim the coat of arms of his ancestors!
Interestingly, the effigy (sculptural tombstone) of Geoffroy's illegitimate grandson, William Longspy (nicknamed the Long Sword), Earl (Earl) of Salisbury and the half-brother of kings Richard I the Lionheart and John (John the Landless), in the Cathedral of Salisbury, is also very equipped with a shield like his grandfather's shield. Geoffroy, Count of Anjou, died in 1151, William Longspey in 1226. Thus, it is the images of their shields that specialists usually cite as an example of the first real transfer of a coat of arms from one owner to another in history.

Effigia (sculptural tombstone) of Thomas Werkley from Bristol Cathedral, 1243. The coat of arms on the shield is quite readable.

And here the details of the design of the coat of arms are very voluminous and quite match the lions on the shield of the Count of Anjou. And (note) the symbolism of the images is already well developed. There are not just lions on the shield, but "leopard lions". And lambelle - "tournament collar". This is a sign that indicated the lateral lines of the genus when inheriting the coat of arms. He received the greatest distribution in the heraldry of Great Britain.

And from that moment, by the way, heraldry itself began, that is, the science of coats of arms. After all, someone needed to record all these donations and transfers. And keep information about them. And besides, make sure that the emblem of one knight cannot be appropriated by anyone else!

And special people - heralds - began to do this.

PS The author and administration of the site express deep gratitude to the British organization "The Medieval Combat Society" for the photos of the effigy they provided.