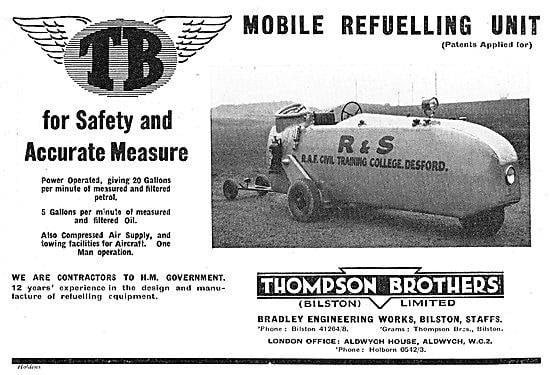 During World War II, the Royal Air Force of Great Britain had a large fleet of equipment for transporting fuel and refueling aircraft. These were mainly tank trucks on the usual truck chassis, but there were exceptions. Together with other machines, the unusual three-wheeled tankers Thompson Brothers P505 were operated.

From roads to airfields

Thompson Brothers Ltd. or TB was founded in 1810 and operated in Bilston, Scotland. In the first century of its existence, it was engaged in the production of various mechanisms and apparatus, up to steam engines. During the First World War she was involved in the manufacture of parts for aircraft, and in 1919-20. she tried to enter the car market.

The company has released a lightweight all-metal Cyclecar three-wheeler with an air-cooled engine producing just 10 hp. They asked for 200 pounds for the car (approx. 8 thousand at current prices). Soon the lineup was expanded. New models were produced annually in different configurations with different bodies, but on a common chassis. 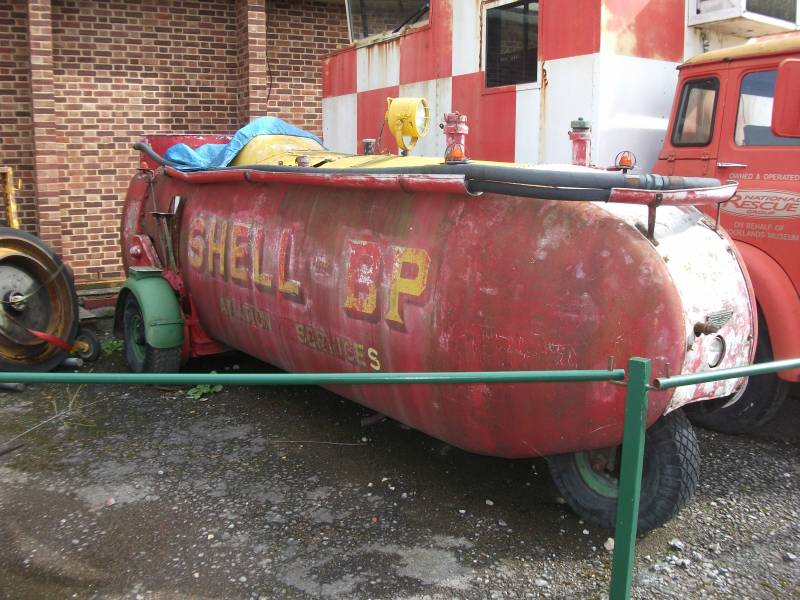 The tanker was one of the first modifications at the Brookland Museum. Photo Flickr.com / Lloyd Rich
However, already in the early twenties, TB faced high competition. Because of this, over the entire decade, the company managed to sell only one and a half hundred cars, which led to understandable financial difficulties. The company tried to develop a four-wheeled vehicle for a different market sector, but never brought the project to production and sales.

In the early thirties, Thompson became disillusioned with the civilian passenger car market and moved into another sector. On the basis of a three-wheeled chassis, they began to build fire tanks and ladders, specialized vehicles, etc. In parallel, special equipment was produced on other people's chassis, trailers with equipment, etc. 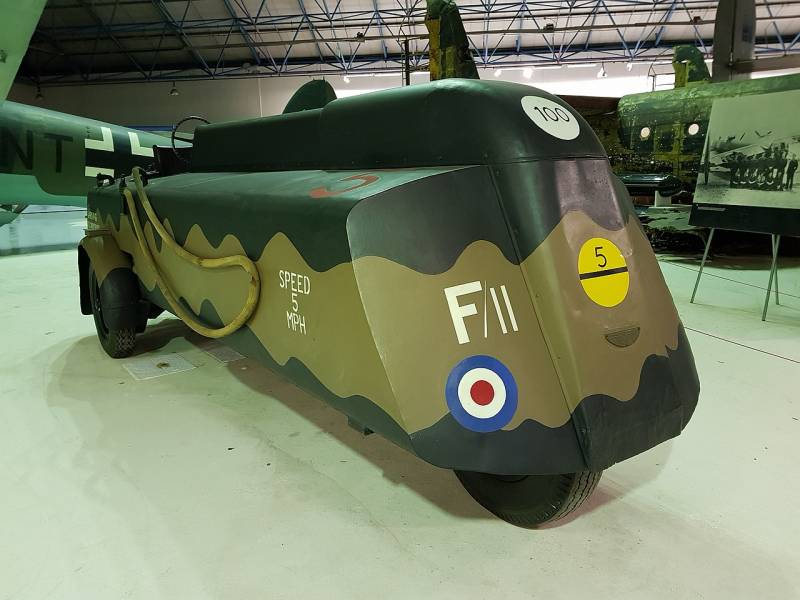 A former military tanker from the KVVS museum. Photo Wikimedia Commons
In 1935, the catalog of such products was replenished with several tanker vehicles on different chassis and with different characteristics. One of them was built on its own three-wheeled chassis. Due to a number of characteristic features, it could be effectively used at airfields. This technique later became known as the P505. Vehicle modifications were designated as Fuel Tender Mk.I, Mk.II, etc.

Passenger cars of the TB brand had a front-engined layout with two wheels on the front axle. A special chassis based on them had a "reverse" layout with a rear engine and axle arrangement. There were also other layout solutions that made it possible to free up maximum space for the installation of special equipment.

At the heart of the car remained a tubular frame, in the rear of which the engine and transmission were located. A 10 hp Ford gasoline engine was used. The radiator was placed at the back of the case. With the help of a mechanical transmission, the torque was transmitted to the chain drive and to the rear drive wheels. Directly above the power unit was an open single-seat cab. In front of the frame, there was a steering wheel mechanically connected to the steering wheel. 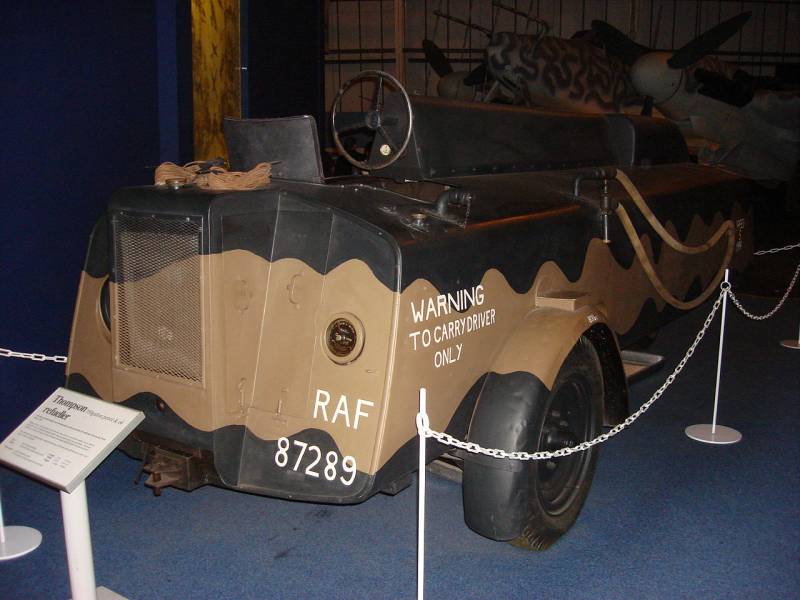 The same car, rear view. Photo Wikimedia Commons
The design of such a chassis allowed the use of different sets of tanks of different configurations. In all cases, the liquid containers took up the entire available space. The tanks were located above the front wheel, passed along the side and even surrounded the cockpit. Also provided were fittings for pouring fuels and lubricants, pumps and places for laying sleeves.

The shape, number and capacity of the tanks varied depending on the modification of the tanker and the wishes of the customer. So, on the early machines of the Mk.I version, two longitudinal tanks with a total volume of more than 300 gallons (over 1350 liters) were used for filling fuel and oil. The containers were placed parallel to each other inside a single lightweight body. There was also a Thompson proprietary pump with a 20 GPM (91 L / min) capacity.

In further modifications with numbers from II to V, other versions of containers were used. For example, one of the most massive tankers TB P505 Mk.V carried 500 gal. (2273 l) of fuel in two separate tanks. There was also a 50 gallon (227 L) oil reservoir. On the left side there were filler necks and pumps. Aft, behind the cockpit, there are gauges to indicate the fullness of the tanks. 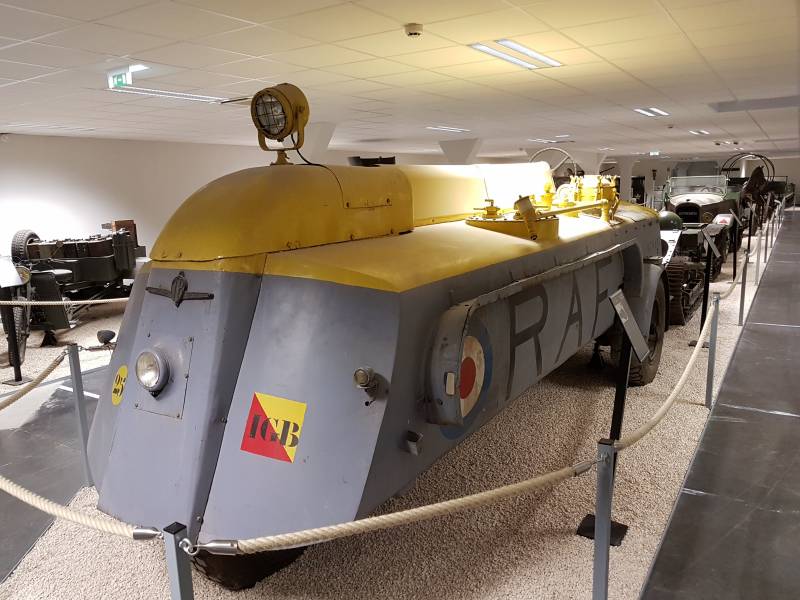 P505 in Strasbourg. Photo Maquetland.com
Depending on the modification and configuration, the P505 tankers were up to 5,4 m long with a width of approx. 1,9 m and a height of not more than 1,5 m. Curb weight - within 2,1 tons. For safety reasons, the speed was limited to 5 miles per hour. This was enough to move around the airfields without the risk of accidents and fires.

Thompson Brothers refuellers first took up real work in 1935. aviation King's Cup Air Race, which ran through Hatfield Airfield. Several cars with fuel developed by TB were waiting for the racers. Among them was a three-wheeled car with built-in tanks. The Thompson tankers received good publicity, and the development company began taking orders. 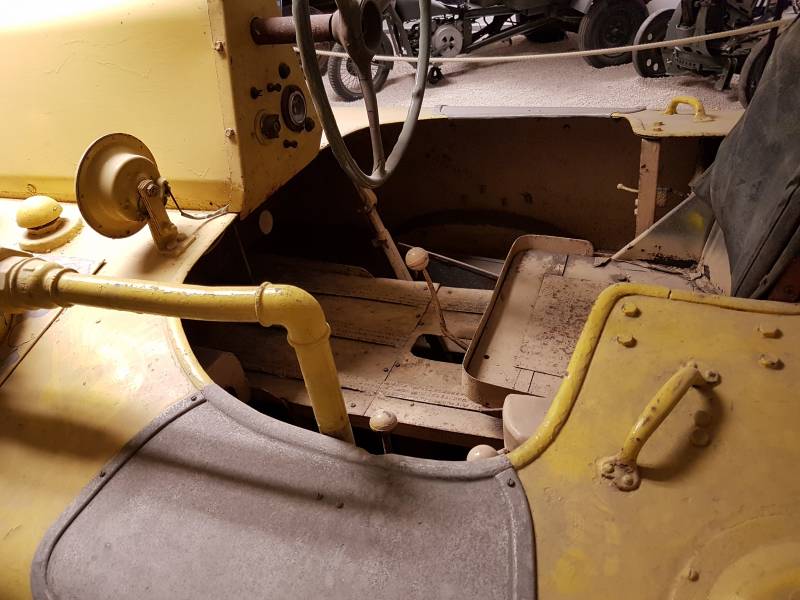 Tanker cab. Photo Maquetland.com
At first, only commercial enterprises engaged in air transportation and operating airfields became interested in new technology. In 1939, Thompson Brothers received the first order for tankers from the Royal Air Force. According to some reports, it was about the development of a new modification, modified to meet the requirements of the KVVS. It went into production as the P505 Mk.V. This car could carry one or two types of fuel and oil.

Later, orders were received for new batches of equipment for KVVS and commercial companies. Thanks to this, series production of the P505 tankers lasted almost 15 years. The last machines of this type left the assembly shop only at the end of the forties. Despite the specific design and archaic set of units, they were still used in aviation. In total, several hundred tankers of all modifications were produced.

The Thompson Brothers specialized aerodrome tanker had a number of features that made it widespread. It was an easy-to-manufacture and operate machine capable of carrying significant amounts of fuel and lubricants within the airfield. All the necessary facilities for dispensing liquids were on board. Small dimensions made it easier to move around the airfield and approach the aircraft. Limited running characteristics contributed to safe operation. As a result, the car coped well with its tasks, and more was not required from it. 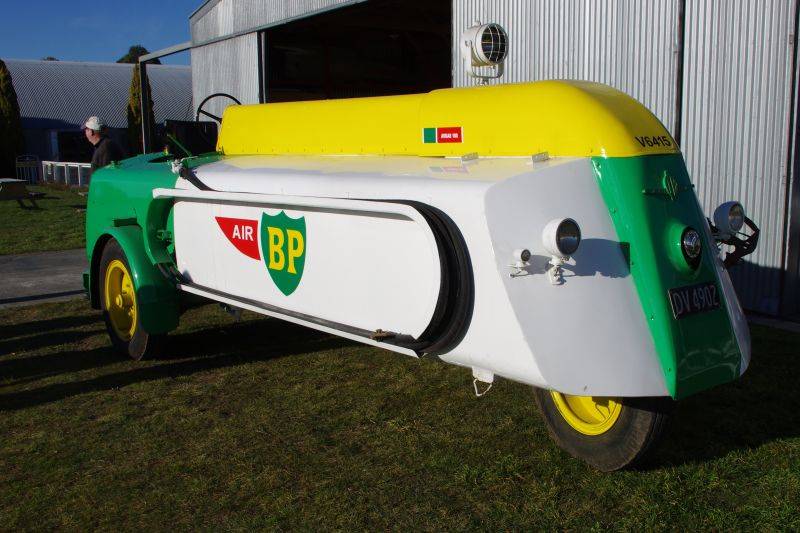 A flamboyant tanker from the Ashburton Aviation Museum. Photo Flickr.com / aardvark_akubra
According to known data, TB P505 tankers are widely used in Great Britain and have been operated at a large number of military and civilian airfields. During World War II, a certain amount of such equipment was sent to overseas bases, along with other materiel of the KVVS.

The military continued to operate the Thompson tankers until the late XNUMXs. They began to refuse such equipment due to the development of a resource and the appearance of a new generation of combat aircraft that needed new means of support. One of the main disadvantages of the cash tankers was the relatively small capacity of the tanks, which was insufficient to work even with fighters, not to mention larger vehicles. However, the refusal and write-off process took several years.

Later, similar processes began in the field of civil air transportation. However, in a number of cases, the P505 retained its potential for a long time. Many operated aircraft of the old types did not need modern equipment for maintenance, and the existing refuellers coped with their tasks. In addition, the P505 proved to be useful in the small aircraft industry, where its small footprint was still a decisive factor. 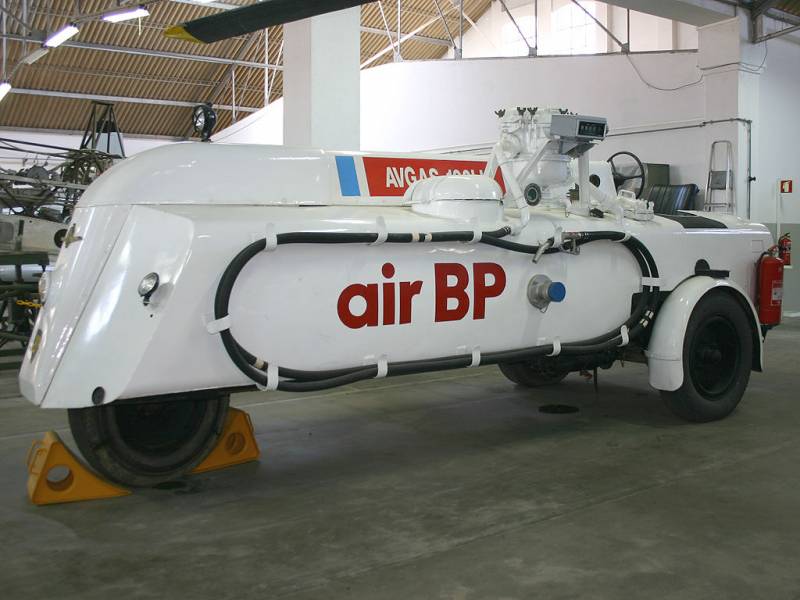 Museum car with non-standard pumping equipment. Photo Auto-zer.com
Although they began to get rid of compact tankers in the forties, a significant part of them remained in operation until the sixties and even seventies. According to known data, the last car of this type was decommissioned only in the last decade of the last century.

Significant volumes of production and widespread use of technology led to curious consequences. So, 20 P505 tankers of various modifications belonging to various organizations have survived to this day. They are now kept in British and foreign museums and private collections. Other serial products were unlucky; in the past they were sent for recycling. IN stories aviation began a new era - and the old successful means of support did not always correspond to it.