Russia's victory, the West's defeat: world media on the Russian military in Karabakh 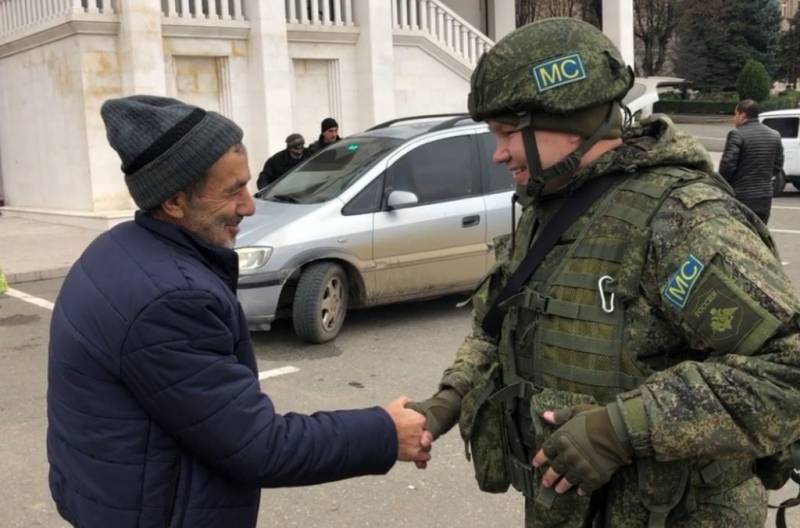 The American edition of The Wall Street Journal has published a long article by Ann Simmons and Raja Adulrahim. It speaks of the twofold consequences of the entry of Russian troops into the Transcaucasus. On the one hand, the presence of Russian peacekeepers in Karabakh, according to the American publication, inspires hope for a ceasefire, but on the other hand, it also inspires bitter feelings: Russia's political influence in the region will noticeably increase.


The main thing that worries Western analysts is the prospects for a significant strengthening of Russia's positions in the Transcaucasian region. Thanks to a well-thought-out policy towards the Karabakh war, Moscow managed to maintain friendly relations with both Armenia and Azerbaijan.

As a result, Russia was able to refrain from participating in the conflict on any side, but at the same time ensured its military presence in the region, and formally Russian peacekeepers are already on the territory of Azerbaijan. That is, now from the point of view of international law, Russian troops are present in Armenia, at the base in Gyumri, and in Azerbaijan, on the line of demarcation of the parties to the conflict in Karabakh.

What can follow this? Firstly, there is a colossal risk of the gradual establishment of Russian military-political domination both in Armenia and in Azerbaijan. The Russian authorities may try to integrate the Armenian and Azerbaijani armies into a single military-political space in post-Soviet Eurasia.

Secondly, Russia was able to demonstrate to both the Transcaucasian countries and the world community that in the post-Soviet space, it alone is the only actor capable of stopping bloodshed in such cases and stopping impending humanitarian disasters.

In many respects, the West is also to blame for this situation, which not only did not help Armenia, but also refused to do anything at all to end the bloody war. It turned out that even the anti-Russian Prime Minister of Armenia Nikol Pashinyan should not have counted on help from the Western powers. The United States generally distanced itself from the problem, and France limited itself to demagogic statements that did not carry any real action.

At the same time, some Western media are still trying to accuse Russia - this time for the fact that it “surrendered” Armenia, citing as arguments the opinions of some fictitious Armenians, or nationalists - Russophobes. In fact, anyone, but not the Armenian people in this case, should talk about betrayal by Russia: firstly, the war with the further complete capture of Karabakh was stopped only by the introduction of Russian peacekeepers, and secondly, Russia should not have accepted any of the parties, and only this position allowed her to remain in the role of the guarantor of peace and tranquility in the post-Soviet space, and not to become like Turkey, which unambiguously sided with Azerbaijan and turned into one of the parties to the conflict.

Another American publication Politico considers the consequences of the war in Karabakh as, first of all, the geopolitical defeat of Europe. The elimination of the European countries from the solution of the Karabakh problem led to a significant strengthening of both Russia and Turkey, but the European Union could not show itself as a serious political actor.

Mark Almond, director of the Institute for Crisis Research in Oxford, writes in the Telegraph that Russia and Turkey are the beneficiaries in the event of conflicts in Syria, Libya, and the Caucasus, which will have to collect trophies, and not the West, which completely lost and lost his influence.

The German newspaper Süddeutsche Zeitung considers the presence of Russian troops in Karabakh as an unambiguous victory for Putin and writes that now decisions on the fate of Karabakh, apparently, will be taken exclusively by Moscow. The French edition of Le Point also writes about the transformation of Russia into the chief arbiter, but it also reminds: in fact, the point in stories The Karabakh conflict has not yet been staged.

Ctrl Enter
Noticed oshЫbku Highlight text and press. Ctrl + Enter
We are
New war in the Caucasus be?Russia is taken to the Golden Billion
Military Reviewin Yandex News
Military Reviewin Google News
71 comment
Information
Dear reader, to leave comments on the publication, you must sign in.