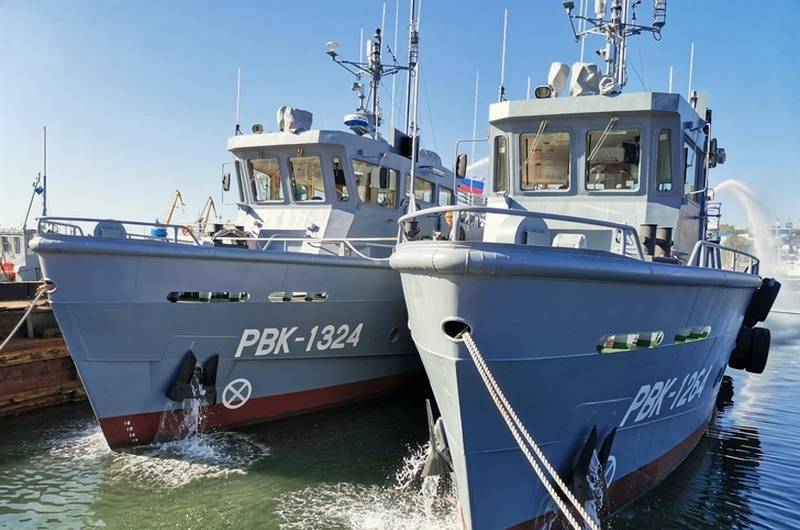 Two Project 23040 search and rescue boats officially became part of the Pacific fleet... According to the press service of the Ministry of Defense, a solemn ceremony of raising the flags of the search and rescue service on the latest offshore diving boats took place in Petropavlovsk-Kamchatsky.

In Petropavlovsk-Kamchatsky, a solemn ceremony of raising the flags of the search and rescue service took place on two modern offshore diving boats of project 23040
- said in a statement.

The boats were delivered to Kamchatka in August of this year by the Northern Sea Route and, after being deactivated, they began to undergo state tests, which were completed in the first decade of October. At the same time, an act of state acceptance of the RVK-1324 raid boats Alexander Sheremet and RVK-1264 was signed.

Diving boats of project 23040 are capable of diving operations at depths of up to 60 meters with sea waves of up to 3 points, as well as prospecting operations using a small-sized remote-controlled unmanned underwater vehicle and a towed sonar. In addition, boats can effectively extinguish fires on ships and vessels, floating and onshore objects up to 30 meters high, pump water from an emergency ship and provide power to a ship or ship that is de-energized as a result of an accident.
Ctrl Enter
Noticed oshЫbku Highlight text and press. Ctrl + Enter
We are
The newest raid diving boat of project 23040 became part of the Northern FleetThe Pacific Fleet received two Project 23040 search and rescue boats
Military Reviewin Yandex News
Military Reviewin Google News
13 comments
Information
Dear reader, to leave comments on the publication, you must sign in.