Flagship of the Naval Forces of Israel 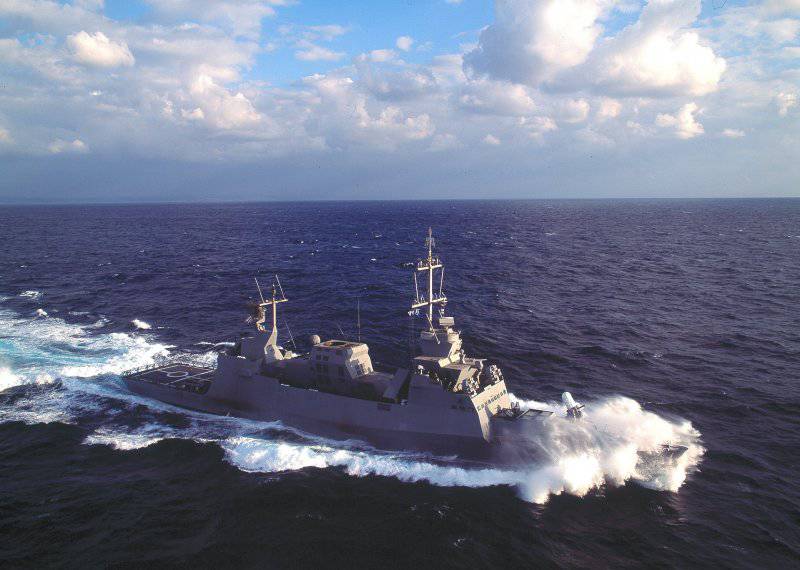 Israeli sailors always remain in the shadow of their more successful colleagues from the Air Force and the ground forces. A tiny country smaller than the Moscow region, by definition, cannot have a strong ocean fleet, and the main event that glorified the Israeli navy to the whole world, the sinking of the destroyer Eilat, did not add prestige to this type of armed forces. Meanwhile, the specifics of the Arab-Israeli conflicts often required the support of land operations from the sea. The Israeli navy, despite its small size and the absence of large ships, took part in many sea battles, exercised control over sea communications in the entire eastern water area of ​​the Mediterranean Sea, participated in the landing of assault forces and in the conduct of sea sabotage.

Israeli sailors cannot control the situation in the South Atlantic or monitor the ships of a “likely enemy” in the Pacific Ocean, but, unlike the fleets of major maritime powers, the Israeli Navy is an active fleet that regularly participates in combat operations. In addition to the death of "Eilat", stories The Israeli Navy has other notable events, for example, the destruction of the flagship of the Egyptian Navy, Emir Farouk, blown up by combat swimmers in the Tel Aviv roads. Or the Battle of Lattakia (1973 year) - the first in the world naval battle of missile boats.

Speaking about the Israeli naval forces, it is worth mentioning a special incident that took place off the coast of the State of Israel during the Six Day War. On June 8, 1967, the US Naval reconnaissance ship Liberty gently swayed on the waves 12 miles from the coast, crew members who were free from shift, smeared with sunscreen, sunbathed under the warm Mediterranean sun. I could not even believe that at this time on the shore in the desert were fierce tank fights. But American sailors felt completely safe: after all, America and Israel are allies - what problems could there be?

A paranormal thing happened: “Mirages” suddenly appeared over the “Liberty” with six-pointed stars on its wings, and a fire descended on the American reconnaissance ship. The planes shot down the Liberty add-ins from 30 mm cannons, and then flooded the ship with napalm. At the same time, the Israeli naval torpedo boats went on the attack - a deafening explosion literally threw the Liberty out of the water. Having received a hole in the underwater part, the ship began to fall to the starboard. The nightmare did not end there - the Israelis came closer and stood at close range from rifle weapons shoot people running along the burning Liberty Deck. From the 290 man of the crew of the American intelligence officer, Israeli sailors and pilots killed and wounded 205 people. An hour later ... Israeli torpedo boats again approached the "Liberty", this time looking at the words: "Do you need help?" In response, a crippled ship screamed: "Get the hell out!" 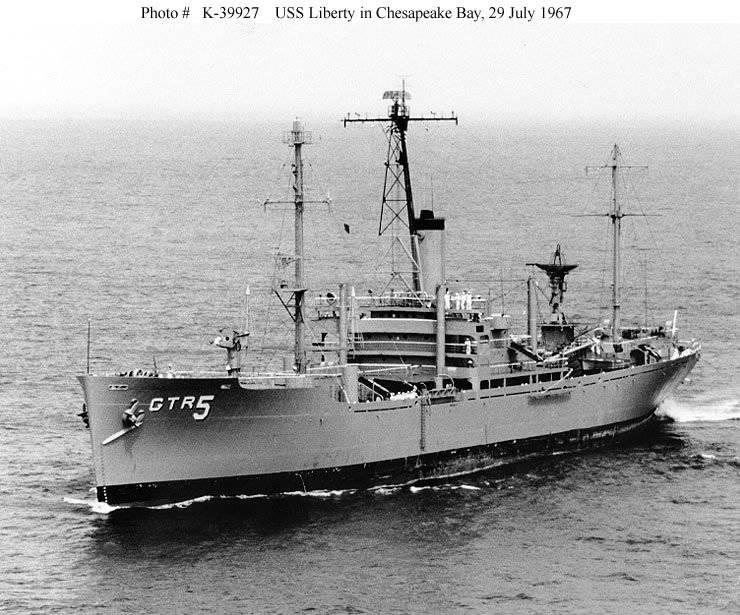 The next day, all the details of the incident were kept secret on both sides, Israel whispered words of apology and secretly paid 13 millions of dollars in compensation (in 1967 prices of the year). It is still not clear what it was. The official version is only suitable for the younger group of the kindergarten - you see, the Israeli military confused "Liberty", richly decorated with star-striped symbolism and with a huge parabolic antenna (displacement - 10 000 tons), with the Egyptian horse transport "Al-Quseir" (displacement - 2600 tons).

The circumstances of the tragedy are persistently silenced, but the most likely is the “Golan version”: knowing how the US National Security Agency works [2] (“Liberty” de facto belonged to the NSA), the Israeli General Staff feared that the secret details of the planned operation to seize the Golan Heights would be intercepted by the powerful radio equipment “Liberty”, and inevitably, through Soviet agents in the NSA, would become known to the Arabs at the same hour. The consequence will be bloody porridge from the advancing Israeli units. In addition, there was a stream of other “non-print” orders on the radio, for example, about the shooting of 1 by thousands of captured Egyptian soldiers in the town of El-Atshsh in Sinai. The Israelis were extremely reluctant to give such facts to international publicity and immediately let “Liberty” be at the expense. Experienced diplomats then somehow agree ...

But we are not here to remember the dark sides of the twentieth century. The fact is that in the combat structure of the Israeli Navy, in addition to numerous boats and several diesel submarines, there are very interesting, in my opinion, sea means. These are the Saar 5 type corvettes - a series of three multi-purpose ships with a total displacement of 1250 tons. "Eilat", "Lahav" and "Hanit".
Corvettes were designed by Israeli experts specifically taking into account the conditions of the Middle East conflict. They were built in the period from 1992 to 1995 year at the American shipyard Ingalls Shipbuilding. 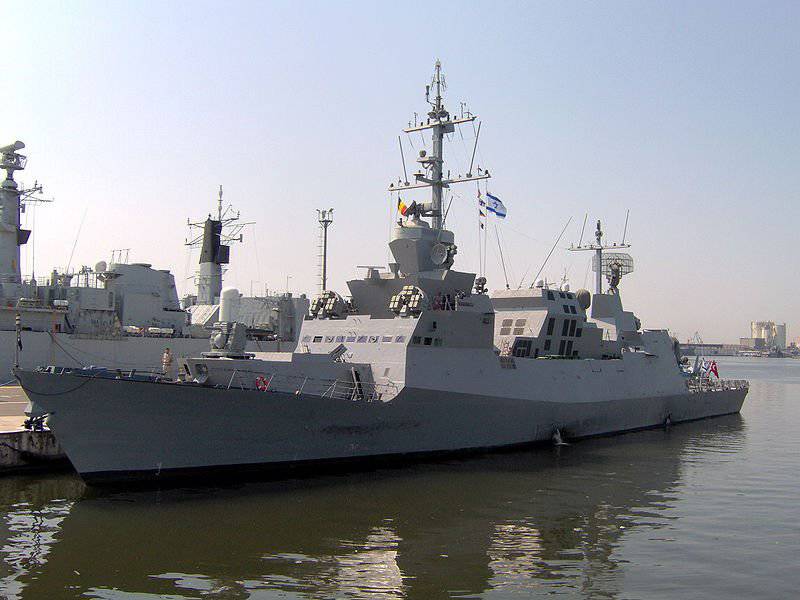 Having studied the experience of other naval powers, the Israeli Navy chose for their ships the concept of the development of the Soviet Navy. Those. to the limit, to fill warships with firing means to the detriment of the cruising range. An ideal tool for short sea raids.
The result was really good corvettes, serving as leaders in squadrons of missile boats and small artillery ships. Corvettes of the type “Eilat” (in honor of the lead ship of the series), despite their small size (displacement 2 times smaller than the Russian corvette Ave 20380 “Watching”), greatly enhance the impact power of its mini squadron and are able to provide quality cover for small ships and boats from air attacks. Next - on the list.

The main caliber of "Eilat" - 8 anti-ship missiles "Harpoon". A familiar thing, the most common in the world of subsonic RCC. Flight range - 120 ... 150 km (of course, in the absence of external target designation, the firing range automatically becomes equal to the radio horizon, ie, 30 ... 40 km). The combat unit "Harpoon" - 225 kilograms, marching speed - 0,85Mach.
"Harpoon", with good luck, can stop even a large target of the "destroyer" class, but launching a missile worth 1.5 million by boats or other small-sized targets is too wasteful. The Israelis have provided for this option a special tool - the anti-ship missile of its own production "Gabriel", and the corvettes are armed with its outdated version - "Gabriel-2", which does not even have an active homing head. This significantly reduces the cost of the rocket, and its natural drawbacks: the need to constantly turn on shipborne radar and a short range of flight - all 35 kilometers are absolutely unimportant when repelling the attacks of armed terrorists' boats. 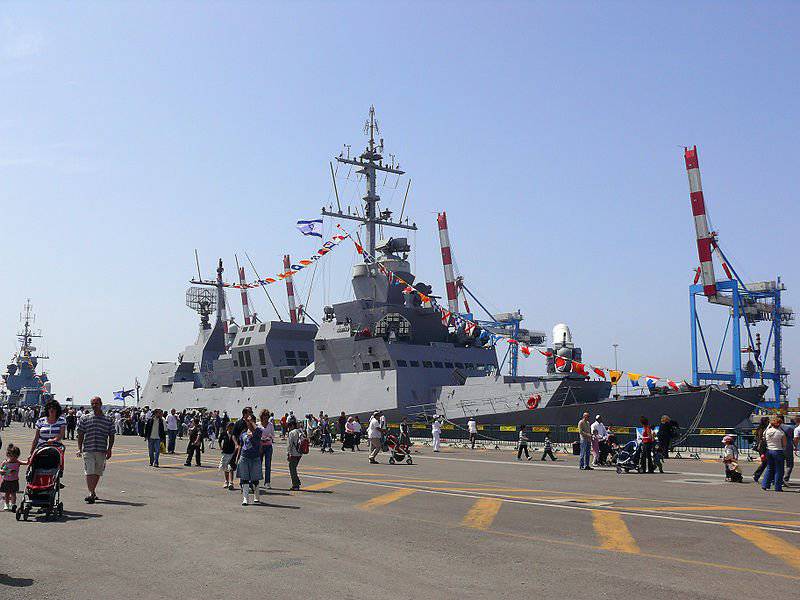 Anti-aircraft weapons:
Israeli engineers are very serious about providing air defense. The newest Israeli anti-aircraft missile system “Barak-1” (translated from the Hebrew “Lightning”) is installed on the corvettes of the “Eilat” type. 64 vertical launch cells, anti-aircraft missile complex strikes targets within 12 km from the ship, the maximum interception height - 5 km. The new EL / M-2248 radar with fixed antenna arrays can detect any airborne threats, including low-flying cruise missiles and guided bombs.
Despite the fact that "Barak-1" is very expensive, it is a popular anti-aircraft missile system on the world market; "Barak-1" adopted by the Navy of India, Singapore, Venezuela, Azerbaijan and other countries. Together with India, Israel is developing a new modification of its naval air defense system, capable of hitting targets at a distance of 70 km.
In addition, the Phalanx anti-aircraft complex is mounted on the nose of the corvette - a six-barreled automatic gun of the 20 caliber mm, articulated on a single carriage with an aiming complex and radar.

Aviation armament:
On a small ship there was a place even for the permanent basing of the helicopter, there is a helipad and a hangar for storing equipment. The Eurocopter Panther multipurpose helicopter has been selected for basing on the deck of Israeli corvettes.

Electronic weapons:
Taking into account the experience of the Doomsday War, when, thanks to the use of the latest electronic warfare systems, none of the P-54 Termite missiles launched from the ships of the Syrian and Egyptian Navy reached the goal, Israeli sailors attach particular importance to electronic countermeasure systems. As part of the ship’s weapons complex there are:
- three launchers for shooting Elbit Deseaver dipoles
- producer of anti-radar interference Rafael Wizard (wideband zapping anti-radar decoy) with passive corner reflectors
- Radar exposure warning system "Elisra NS-9003 / 9005"
- AN / SLQ-25 Nixie anti-torpedo protection system, consisting of an onboard signal generator and towed sonar jammer. 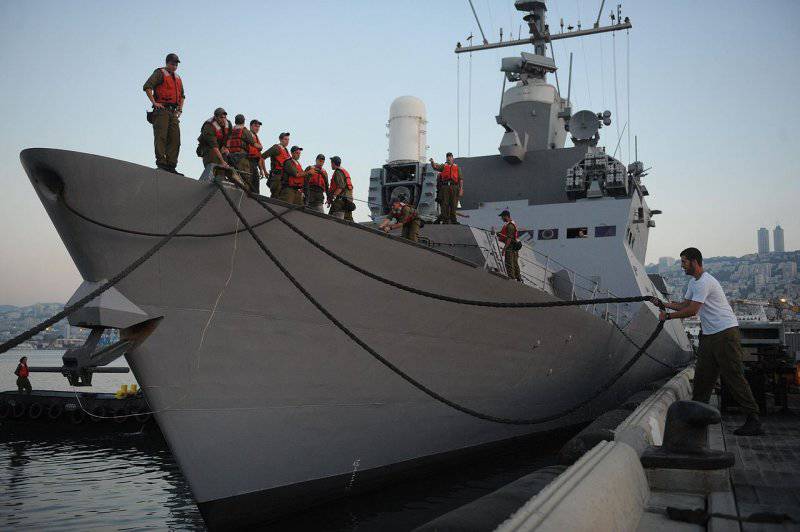 Powerfully, but ... 14 July 2006, during the Lebanese war, the Israeli Navy corvette Hanit fell under a missile strike from the coast. No advanced anti-aircraft systems and jamming systems saved the Khanit: 700 Chinese-made YJ-82 anti-ship rocket [3] sank into the ship’s side, killing the Israeli sailors 4. This time, the Israeli Navy is relatively lucky: despite the 165 detonation, the missile warhead kg remained afloat and did not receive serious damage. After half a year, the Khanit was able to return to the execution of combat missions off the coast of Lebanon.

The cause of the incident was the usual human negligence - at the time of the rocket attack, the tracking system of the corvette was rendered inoperative. The crew did not expect the enemy to have powerful anti-ship missiles and solved some problems of its own at that moment. By the way, a quarter of a century before these events, the disconnected radar caused the death of the British destroyer Sheffield. History teaches no one.

General characteristics of the corvette type "Eilat":
KVL length is 85,6 meters, width is 11,88 meters, draft is 3 meters. The body is made with the requirements of technology "stealth". The standard displacement is 1000 tons. Full displacement - 1250 tons. Crew - 74 person.
The ship is driven by a combined plant consisting of two V12 diesel engines and a General Electric gas turbine LM2500 for full speed.
Full speed - knot 33
The cruising range at an economic rate is 3500 nautical miles (distance by sea from St. Petersburg to Murmansk).

Do not be surprised. as Israeli engineers managed to place so many weapons systems on such a miniature corvette and provide the ship with high seaworthy characteristics. Back in 1967, in the Soviet Union, a small rocket ship project was created according to a project with the easily remembered 1234 cipher. In the MKR case with a full displacement of 730 tons (!), It was possible to place 6 launchers for launching heavy Malachite P-120 anti-ship missiles, a two-beam launcher of the Osa air defense missile system (20 missiles), and a 76 mm anti-aircraft gun and 30 mm anti-aircraft missile AK-630. Aircraft on board, of course, was not, but you look at the year of the creation of the ship. In those days, the helicopter seemed overkill. Small rocket ships of the 1234 Ave. were built in the USSR in batches and still remain in the ranks of many countries of the world. It was precisely the “Mirage” MRC that distinguished itself in the 2008 rocket battle in the Black Sea in August.

As for corvettes of the “Saar-5” type (“Eilat”), until a new draft of the warship with the Aegis system has been created, corvettes of this type remain the flagship ships of the Israeli Navy.

Notes.
1. The destroyer "Eilat" - a former British destroyer type "Z". Bookmark date - 1943 year, full displacement - 1700 tons. It was sunk in 1967 by four P-15 Termite anti-ship missiles launched from Egyptian missile boats. The date of the destruction of the destroyer - October 21 - is celebrated as the Day of the Israeli Navy.
2. In the US, there are 25 intelligence services of various profiles: the FBI, the CIA, the NSA, the ONI maritime intelligence, etc., etc.
3. Yingji anti-ship cruise missile YJ-82 from China, export designation C-802. Firing range - 120 km. (in some versions it may be increased to 500 km). CRP speed - 0,9M. Mass of warhead - 165 kg. Equipped with an active radar homing head. Due to its low price, the rocket is extremely popular in developing countries. 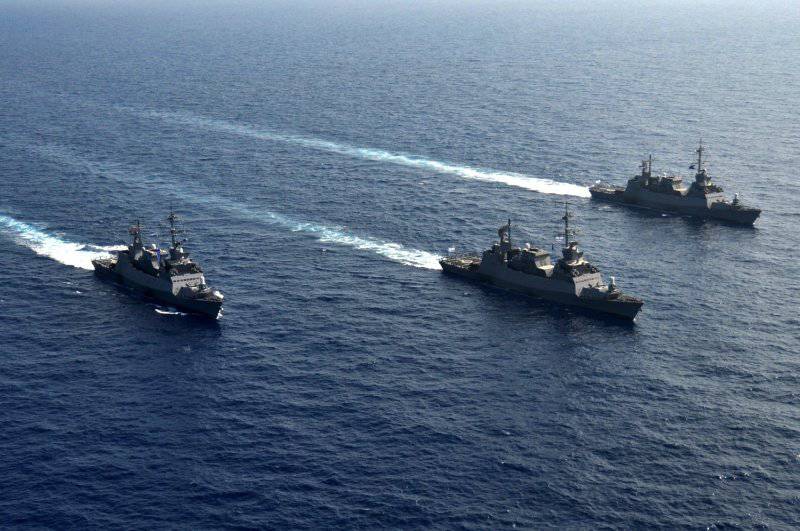