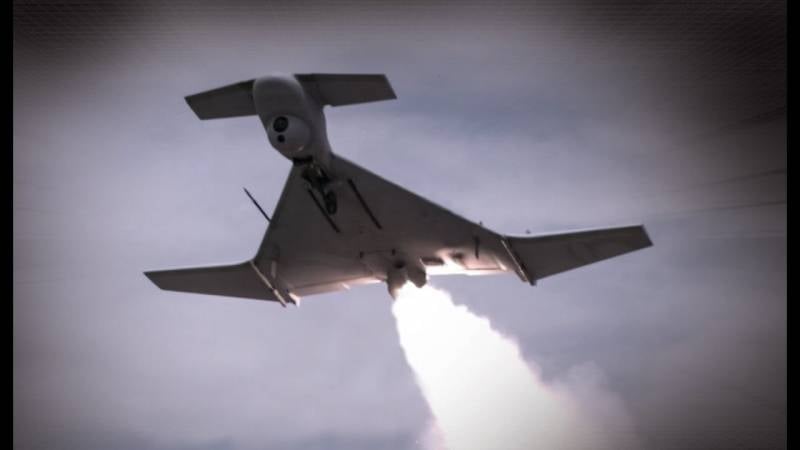 The most popular Harop loitering ammunition in the media. Source: planeta.press

It would seem, what is difficult in defining a loitering ammunition? However, the British Department of Defense has built such a heavyweight wording:

“Inexpensive guided high-precision projectiles that stay in the air for a certain time in standby mode and then quickly attack over-the-horizon ground or sea targets; loitering ammunition is controlled by an operator who sees on the screen in front of him an image of the target and the environment in real time and, thanks to this, has the ability to control the exact time, position in space and direction of attack of a stationary, movable or mobile object, directly participating in the process of its identification and confirmation of the data about the purpose ".

It can be seen from the definition that flying kamikaze are collected from some solid pluses. 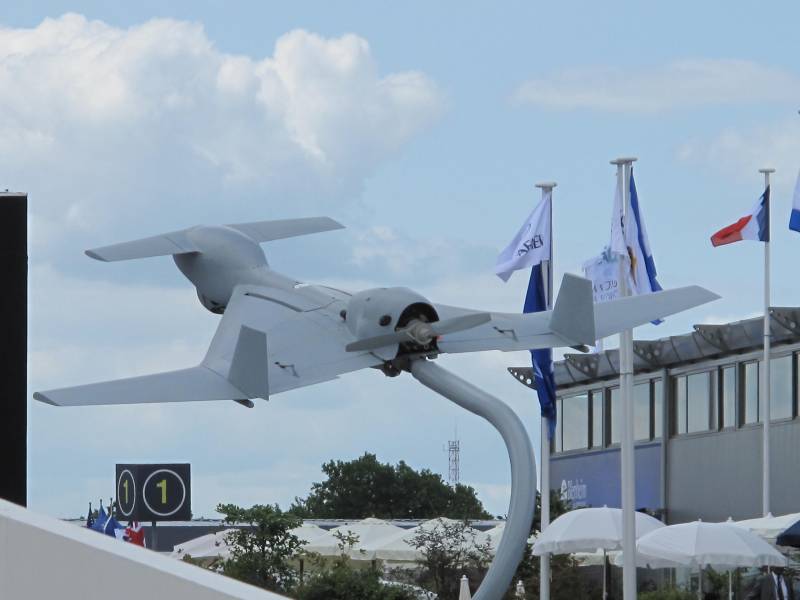 IAI Harop. Source: wikipedia.org
In the western press, the advantages of such a technique include a noticeable reduction in the time from the moment a target is detected and its destruction, as well as a decrease in collateral damage from use. At the same time, the loitering weapon in some cases turns out to be cheaper than traditional artillery and guided aerial bombs. To reliably defeat single targets that are out of line of sight, a large consumption of expensive ammunition is required - shells, mines, unguided missiles, etc. Often for this it is necessary to lift manned strike equipment into the air, which is expensive and risky. With a successful combination of circumstances, loitering ammunition will do this job much faster and more economically.

Do not forget that a technically savvy enemy is able to track the location of an artillery installation (battery) and destroy an unmasked weapon with a return salvo. The flying kamikaze has no such disadvantage. Finally, the advantage of a remotely controlled strike complex with television cameras on board is a powerful propaganda effect. One has only to remember what impression the videos with the destruction of manpower and armored vehicles of the forces of Nagorno-Karabakh and Armenia made. This was especially acutely perceived in the Russian segment of the Internet. The real panic was caused by the massive use by Azerbaijan of Bayraktar TB2 drones and many Israeli and Turkish kamikazes. The main motive for hysteria is that Russia does not have such weapons and adequate protection. 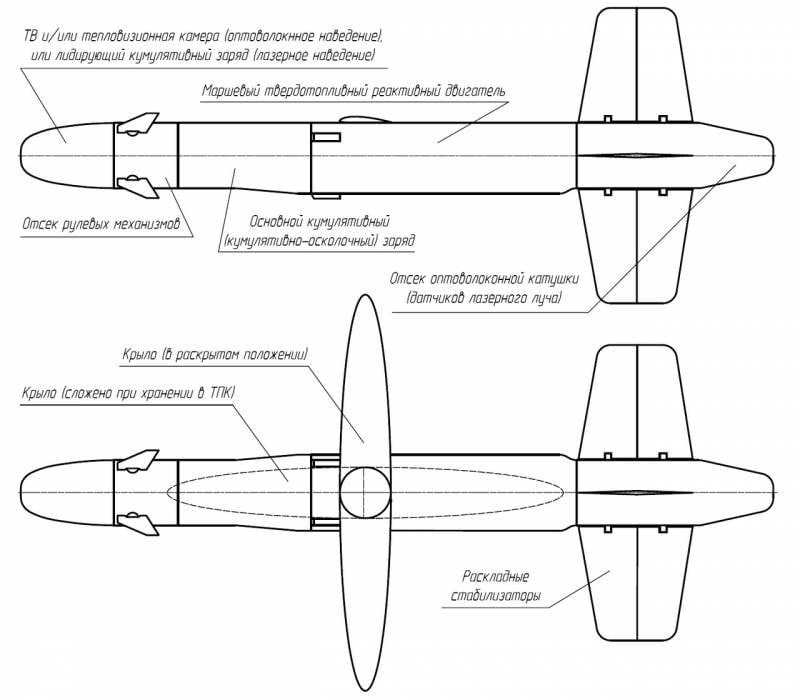 Internet project of the domestic kamikaze drone "Ariadna". Source: vk.com
In one of the thematic groups of "defense" topics, VKontakte even launched (attention!) An independent development of the first domestic loitering ammunition. The project was named "Ariadne" and a brief technical description was presented:

“Loitering ammunition is a modular electronic-optical missile system of 152 mm caliber designed to destroy armored vehicles, protected objects (such as bunkers, bunkers, bunkers) and engineering structures, surface targets and enemy personnel, as well as low-speed air targets (UAVs, helicopters ) at a distance of up to 25 km, in the absence of direct visibility of the target. The Ariadne is launched from a sealed transport and launch container (TPK), which greatly simplifies its operation in the army. TPK can be installed on air (including UAV), sea and land (armored vehicles, armored personnel carriers, infantry fighting vehicles) carriers, it is also possible to launch TPK from the machine (the approximate mass of the TPK with a rocket is 70 kg). "

The developers are planning to create a 3D model of "Ariadne" and virtual blowing in a wind tunnel.

There are still debates about the place of loitering ammunition in the world weapons hierarchy. Most experts believe that this is a type of unmanned aircraft equipped with a warhead. And some attribute kamikaze with wings to guided missiles with a loitering function. The first opinion is supported by the optional possibility of some loitering ammunition to be used as a scout.

For example, the Polish Warmate drone, in addition to the cumulative GK-1 and the GO-1 high-explosive fragmentation warhead, can be equipped with optical and infrared surveillance systems. In this case, the aircraft is able to return home and land. Some kamikaze drones are already at the base equipped with parachutes and inflatable rafts for rescue in case of failure to fulfill a combat mission or lack of targets on the battlefield. 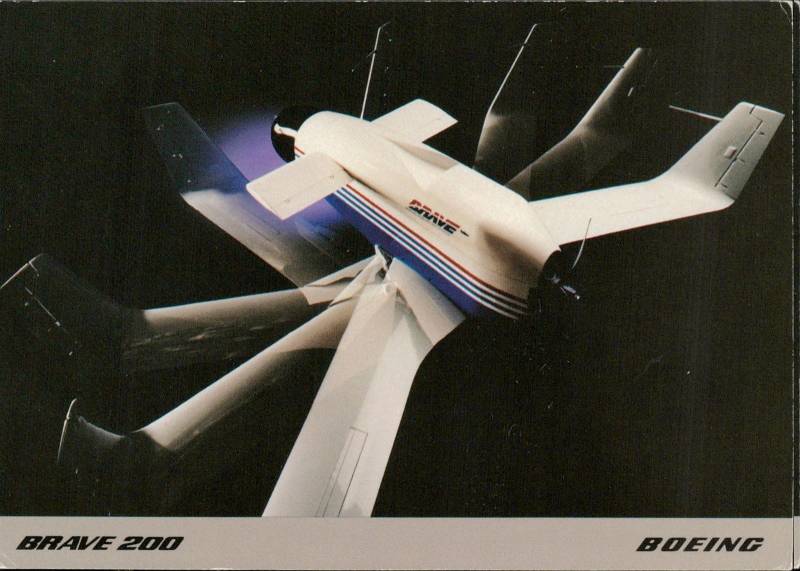 American experienced Brave-200. Source: hippostcard.com
Many believe that loitering ammunition is a relatively new type of weapon, but the first active developments are more than 40 years old. In the late 70s, MBB developed an anti-tank version of the Tucan drone, and a few years later Boeing developed the Brave 200 anti-radar flying kamikaze. The drones were housed in 15 pieces in a block launcher, ready for practical use. Despite positive reviews and several successfully tested prototypes, the project was abandoned in the mid-80s.

It is no coincidence that the destruction of enemy air defense targets was among the priority tasks of the first developments of kamikaze drones. During the Cold War, the Soviet Union was seen as a priority enemy, undoubtedly its strong point was its powerful air defense forces. Therefore, the destruction of the radar (without the risk of losing an expensive aircraft and pilot) was seen as a tempting goal.

IAI Harpy. Source: wikipedia.org
In the mid-80s, Israel Aircraft Industries developed the Harpy drone, which later became serial. The unmanned aerial vehicle, 2,7 meters long, was equipped with a 2,1-meter deltoid wing and a pusher propeller. The kamikaze is driven by a 38 hp rotary piston engine. from. For its time, this type of power plant provided the necessary compactness and high power density. Over time, internal combustion engines on small-sized kamikaze will be replaced by electric motors, and lithium-ion batteries will replace the fuel tanks. Harpy in the late 80s developed with 32 kg of explosives on board cruising 185 km / h and flew at a range of up to 500 kilometers. The homing head made it possible to automatically search for and destroy sources of radar radiation.

In 2009, IAI announced the Harop loitering ammunition - a variant of the Harpy drone, but with an optoelectronic homing head for hitting priority, especially important mobile objects. In Harop ammunition, the round hull has been replaced with a more complex profile, and the sweep of the leading edge has been reduced in the delta wing. The projectile can be launched at any angle, along a vertical or horizontal trajectory from various mobile platforms, including land-based and sea-based launch containers, as well as air platforms in the direction of the intended target area.

The widest range of patrolling weapons for various purposes is currently offered by the Israeli company UVision. The central place in the manufacturer's portfolio is occupied by the Hero series of kamikaze drones. The most compact is the Hero 30 backpack tactical ammunition weighing 3 kg with an electric motor. The drone is launched from a container launcher. The maximum duration of its flight is 30 minutes, the range is from 5 to 40 km, and the mass of the warhead is 0,5 kg.

The larger longer-range projectile Hero 400 has a 40 kg caliber, an 8 kg warhead and a gasoline engine. The duration of its flight is already 4 hours, and the maximum range within the line of sight is 150 km. If Hero 30 is intended for action against personnel, then Hero 400 destroys Tanks and armored vehicles.

All Hero versions have extremely low acoustic and infrared signatures, can be used as loitering projectiles or reusable reconnaissance, surveillance and data acquisition systems equipped with a parachute and a stabilized block of electro-optical and infrared sensors of our own design. Designers from UVision place a special emphasis on the versatility of ammunition - weapons can be integrated both on land and sea carriers, and on aircraft delivery vehicles.

The Hero family. Source: uvisionuav.com
The line of so-called strategic loitering ammunition (the term UVision) opens with a gasoline Hero 250 with a five-kilogram warhead. Due to the piston engine, the kamikaze can stay in the air for up to 3 hours and fly 150 kilometers. Heavy models Hero 900 and Hero 1250 carry 20 and 30 kg of explosives, respectively, and can operate at a distance of 200-250 kilometers.

Currently, dozens of companies around the world are developing and producing families of loitering ammunition, which differ in the level of tasks being solved and in design characteristics. They are in service with the armies of the US, Israel, Turkey, China, Great Britain, Poland and, of course, Azerbaijan.

In the course of the recent conflict between Azerbaijan and Armenia with Nagorno-Karabakh, the effective use of shock drones and loitering ammunition has become a real hallmark. The topic of UAVs is beyond the scope of this material, so let's dwell on unmanned kamikaze in more detail.

The lightest was the Turkish Alpagu from STM with a mass of 3,7 kg, a combat radius of 5 km and an airborne time of up to 20 minutes. A larger Israeli Skystriker was used in the sky of Nagorno-Karabakh, which already carries 5 or 10 kg of explosives (depending on the version) and is capable of staying in the air for up to 6 hours. 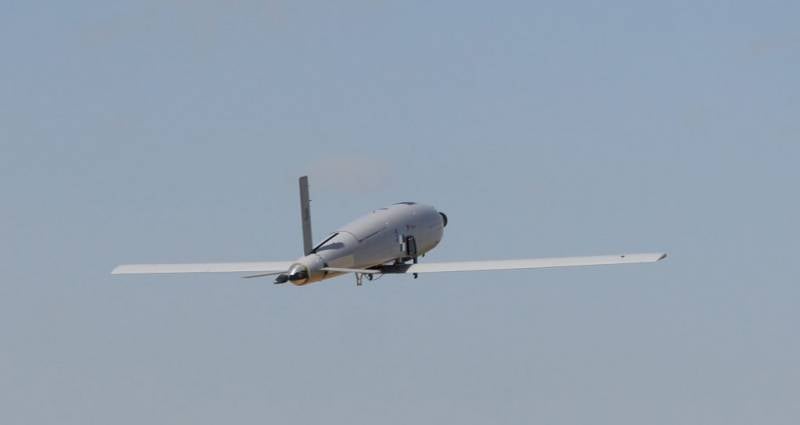 Israeli Skystiker. Source: elbitsystems.com
The Azerbaijani army is armed with the aforementioned IAI Harop, as well as the newest IAI Mini Harpy. The latest model is tailored for the destruction of anti-aircraft missile systems. Loitering ammunition is capable of detecting radiation from an all-altitude detector or radar for illumination and guidance. Further, the kamikaze works as an anti-radar missile, delivering 8 kg of explosives to the enemy.

The baptism of fire during the conflict was passed by the Azerbaijani-Turkish kamikaze drone Iti Qovan, developed on the basis of the Zerbe loitering ammunition. This device carries 2 kg of warhead with 4 thousand striking elements and is capable of flying 100 kilometers with a practical ceiling of 4,5 thousand meters.

Among the many targets destroyed by Azerbaijani kamikaze drones, a special place is occupied by the 36D6 (19Zh6) mobile three-coordinate airspace surveillance radar, which can be attached to the S-300PS air defense missile system division. The IAI Mini Harpy drone mentioned above also destroyed the Armenian S-300P air defense system, which was specific to itself. These were perhaps the most important and costly targets for comparatively low-cost vehicles. The information about the destruction was based on the data of objective video monitoring from the board of loitering ammunition. 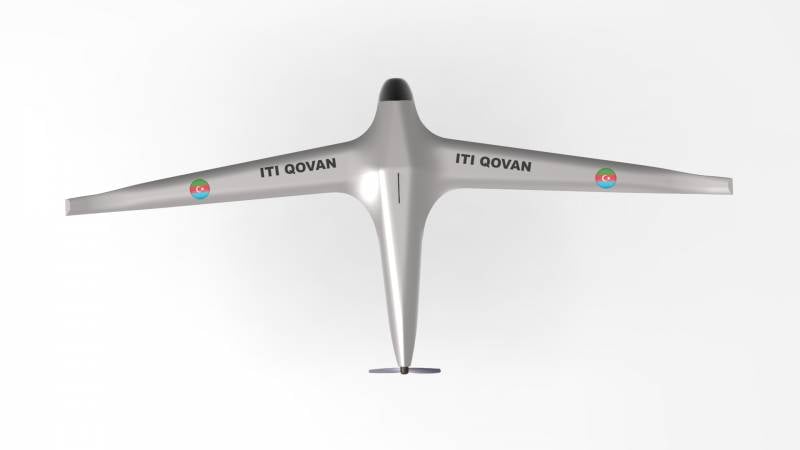 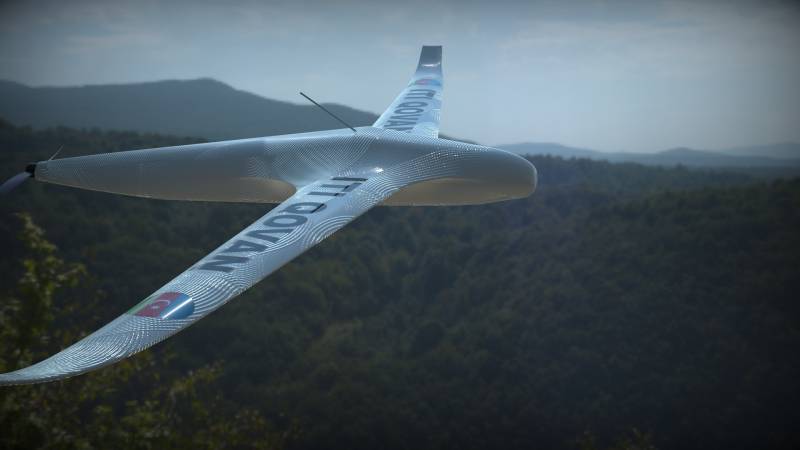 Iti Qovan kamikaze drone from Baku. Source: grabcad.com
All of the above can create the impression that the patrolling weapons, coupled with Bayraktar TB2 attack drones, provided the lion's share of Azerbaijan's victory over Armenia in Nagorno-Karabakh. However, this is not at all the case. The morally and technically obsolete Armenian air defense systems Strela-10, Osa-AKM and modifications of the S-300 could still successfully operate on a manned aviation... This, incidentally, was the main reason why combat aircraft and helicopters were practically not used during the war. But against drones of various stripes, all this technique is powerless - for example, the electric motor of a loitering ammunition, due to the lack of an IR signature, is not captured even by MANPADS.

As the retired colonel and editor-in-chief of the Arsenal of the Fatherland magazine Viktor Murakhovsky justly noted in one of his interviews, the main problem of the troops of Armenia and Nagorno-Karabakh was not Azerbaijan's drones. Even with complete superiority of the enemy in the air, one can quite successfully defend and even attack. To do this, it is worth looking at how terrorists in Syria have been surviving under the blows of the Russian Aerospace Forces for five years.

Victory is always forged by ground troops and the outcome of battles and war in the end depends on their effective work.

Artsakh was not ready for this war. There was a shortage of elementary engineering structures that would provide shelter from air attacks, barriers, rubble and minefields were not arranged. And this is only a small part of the problems of the defenders of Nagorno-Karabakh. All this allowed the Azerbaijani military to feel quite at ease in the operational space and not give up the initiative to the enemy. And loitering ammunition, coupled with shock drones, played only an auxiliary, albeit very effective role here.