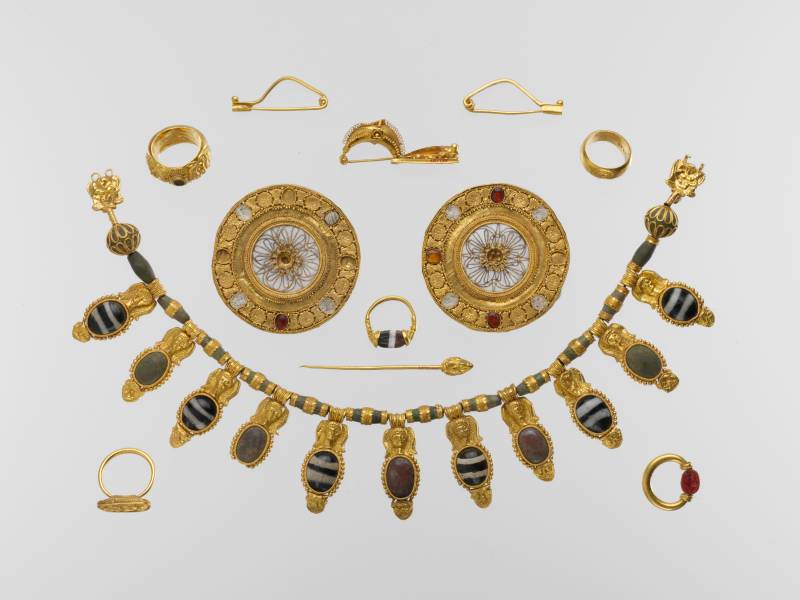 A set of gold jewelry from an Etruscan tomb. The beginning of the XNUMXth century BC e. Consists of a magnificent necklace of gold and glass, a pair of earrings with discs of gold and rock crystal, a gold clasp for a dress (brooch) decorated with a sphinx, a pair of simple gold brooches, a gold pin for a dress and five rings. Two rings are engraved with scarabs that rotate on a swivel base, one decorated with embossed satyr heads, and the other two with gold seals. (Metropolitan Museum of Art, New York)

Culture of clothes. Today we will get acquainted with the clothes that were worn on the territory of the Apennine Peninsula in the pre-Roman era, with the clothes of the mysterious Etruscan people. Mysterious, because the people possessed a written language, but it has not been possible to decipher it completely, although about 12 thousand Etruscan inscriptions have come down to us. There have been attempts to translate them using the Cyrillic alphabet. But ... the authors of these translations, as even the alternativeists themselves write, "may have found the key." But the distance from the word "possibly" to a real translation is enormous. But the most important thing is that the monuments left by the Etruscans do not in any way coincide with the Slavic antiquities. But there are a lot of these monuments: these are the frescoes that adorn their tombs, dishes made of black clay and products made of gold and silver, stunning in their beauty and subtlety. In addition to the Vatican museums in Rome, where the bulk of Etruscan antiquities are located, as well as the Louvre, a simply stunning part of them in terms of volume, and practically unknown to either Russian tourists or our historians, is located in local museums of modern Tuscany, in its small towns. 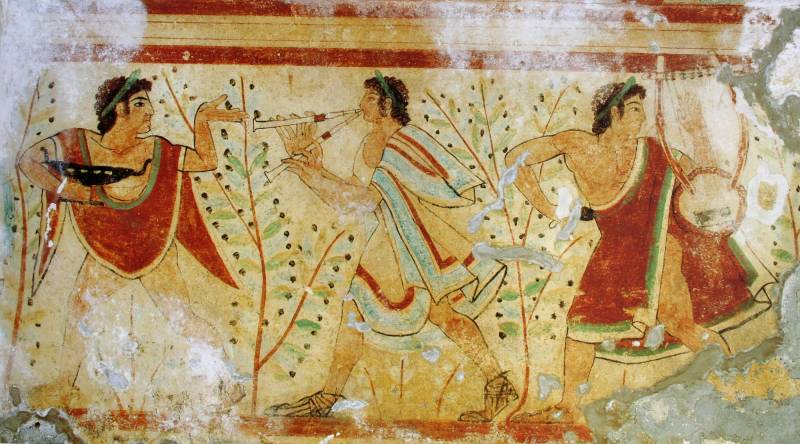 Tourists simply do not get there, usually limiting themselves to Florence and Verona, and after visiting Cortona, you can visit the Museum of the Etruscan Academy in the Casali Palace, in Sovana - the abandoned tombs of the Etruscans, in Tarquinia - their museum, as well as world famous tombs that even received their own names : "Hunting and Fishing", "Flower and Lotus", "Lionesses", "Magician", "Triclinium", there are tombs in Norkia too, and Etruscan antiquities can be seen in the museums of Vulci, Saturnia, Chiusi and Papulonia. But today in this article we will not consider the culture of the Etruscans as a whole, as well as three theories of their appearance in Central Italy. It will be enough to know that during the heyday of their civilization they had a confederation of 12 cities, that the heyday of their culture falls on the end of the 351th-XNUMXth centuries. BC e., that the Romans conquered Etruria by XNUMX BC. e., they borrowed a lot from the conquered. Well, now we can already talk about clothes, which we know about primarily from the ceramic sarcophagi that have come down to us and the paintings of ancient Etruscan tombs. 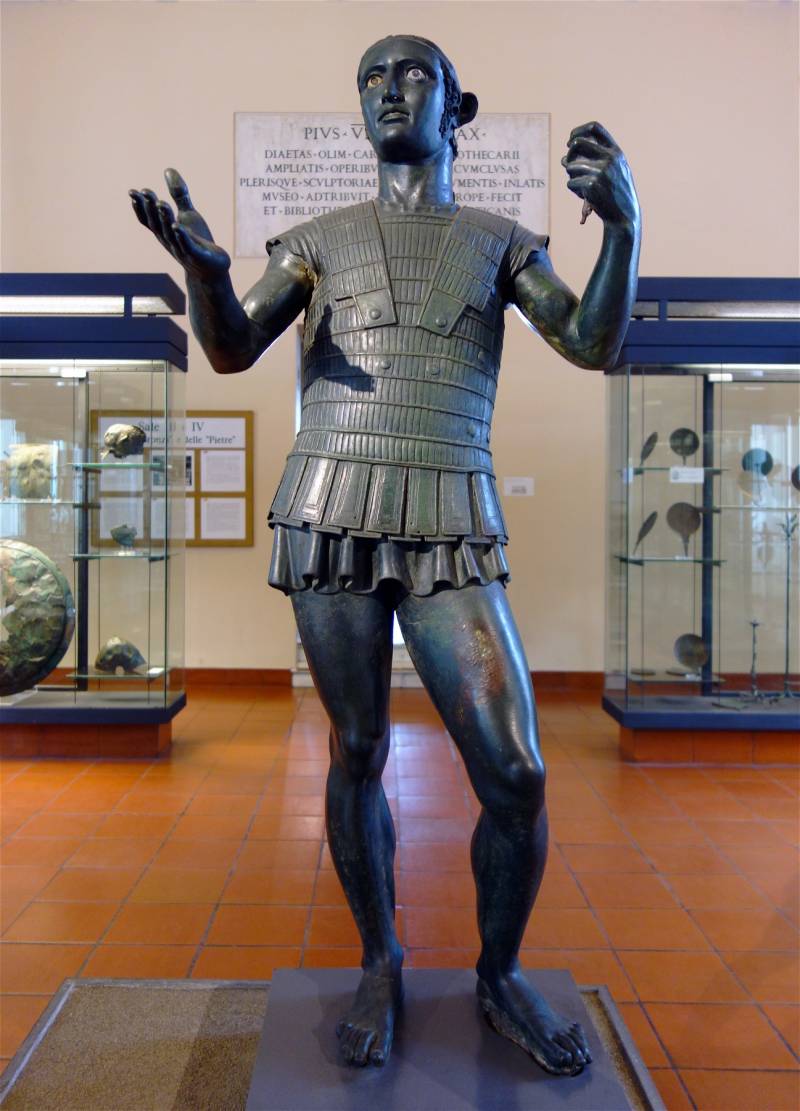 Statue of Mars from Todi. Bronze. IV century BC e. The total height of the statue is 1,69 m. There is a dedicatory inscription on the statue, so we know that a certain Achilos Trutitus ordered it. The figure depicts a warrior dressed in plate armor, made, however, in the characteristic manner of a Greek linen thorax. It is considered a fine example of Etruscan foundry art. (Gregorian Etruscan Museum, Rome)

Clothes for a warm climate

So what was the Etruscan men's clothing like? Very simple - only this can be said: an overhead chiton, akin to the ancient Greek one, and they could throw veils on their shoulders. A loose-fitting semicircular cloak called "tebenna" was also in vogue, falling down in beautiful folds. The fabric of such cloaks was usually bright: green, blue, blue, white with a blue border. A short woolen tunic was worn under the cloak. By the end of the VI century. BC e. short men's shirts made of dense fabric like canvas, which tightly fitted the figure, came into fashion. 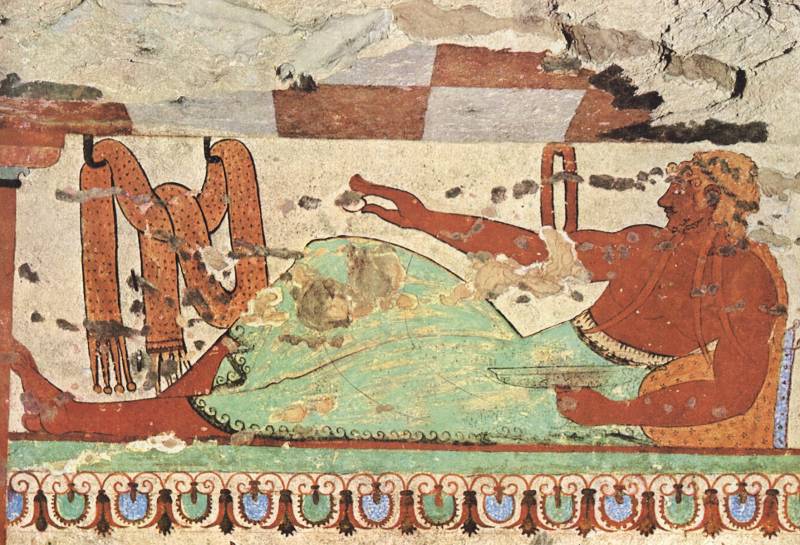 Feasting man. "Tomb of the Lionesses", Tarquinia, Tuscany
The tunes of wealthy people were very elegant: rather long, but with short sleeves, sewn from thin transparent fabrics. Colors - saffron, blue, terracotta ... Also, the chiton could be richly embroidered, and its hem was decorated with stripes of colored fabric. The same stripes could be sewn onto bedspreads. Chitons were one-piece and widened downward or had a rather wide frill at the bottom. Like the Greeks, the Etruscan chiton could leave one shoulder open. 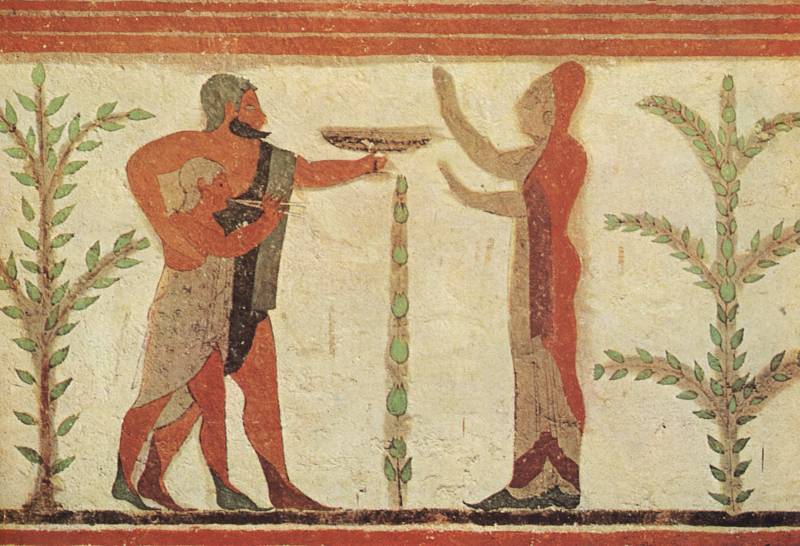 Cup offering. "Tomb of the Baron", Tarquinia, Tuscany
The peasant's tunic was straight with sleeves and looked like a modern shirt, which was necessarily belted.

The costume of the Etruscan priest was very beautiful, consisting of a white woolen tunic below the knees and a blue cape, which was decorated with a wide colored stripe. The shoes of the priests had high heels and long pointed socks bent upwards.

That is, in general, it was a costume ... of the Greeks of Asia Minor - a costume of people who lived and live in a warm seaside climate, not knowing cold and frost.

The women of Etruria dressed much more variedly. However, that is why they were women. It is noted that the female costume was very similar to the clothing of women of the Ancient East. So, as underwear, they wore a very long, one-cut shirt with sleeves, which was worn over the head and did not girdle at the same time! A cape was again put on over it, the ends of which were to be fastened on the chest with a beautiful clasp. The end of the cape could be draped over the head.

He also knew a costume that consisted of a bodice with sleeves and a wide skirt (a clear influence of the Cretan-Mycenaean fashion), and sometimes only a skirt, but with a wide belt, and a cape. Wide skirts were only made of patterned fabrics, at the bottom they were decorated with a colored, most often purple, stripe, but the bodice could also be one-color. Complementing such a complex attire was a small sleeveless jacket. 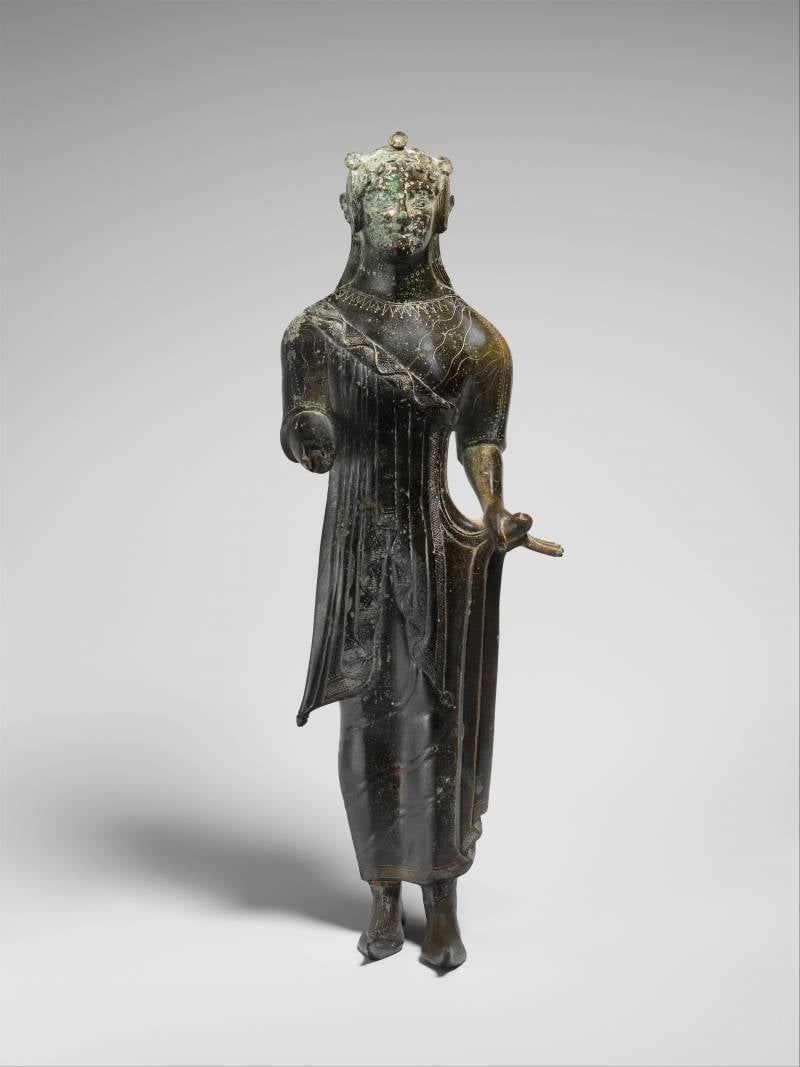 "Young woman". This statue, perhaps the most famous Etruscan figural bronze in the collection of the Metropolitan Museum, was made in one of the main centers of bronze processing, probably in Vulci or Chiusi. The artist was clearly inspired by the archaic Greek crust, votive statues of young women in a typical frontal pose with their right hand extended and left holding their clothes. However, the sculptor was not particularly concerned with the accuracy of the image of the costume. The Greek himation (cloak), for example, is distorted. The folds, so clearly visible from the front, are absent on the back of the statue - this possibly indicates that the artist was looking at a two-dimensional source, such as a relief sculpture or vase, and not at a volumetric sculpture. The pointed shoes are crafted with elaborate lace and floral designs, clearly Etruscan shoes. The left foot of the figure is a modern restoration. End of the XNUMXth century BC e. (Metropolitan Museum of Art, New York)
Girls wore long pleated skirts, and over them they wore straight chitons to the knees and, again, a small veil, covering their heads. There is a fresco of the XNUMXth century. BC e. in one of the tombs, which depicts women performing a ritual dance. They are wearing long, slouchy, multi-colored chitons with a characteristic wide colored border. At the same time, they have colored bedspreads on their heads, also trimmed with a colored stripe along the edge. 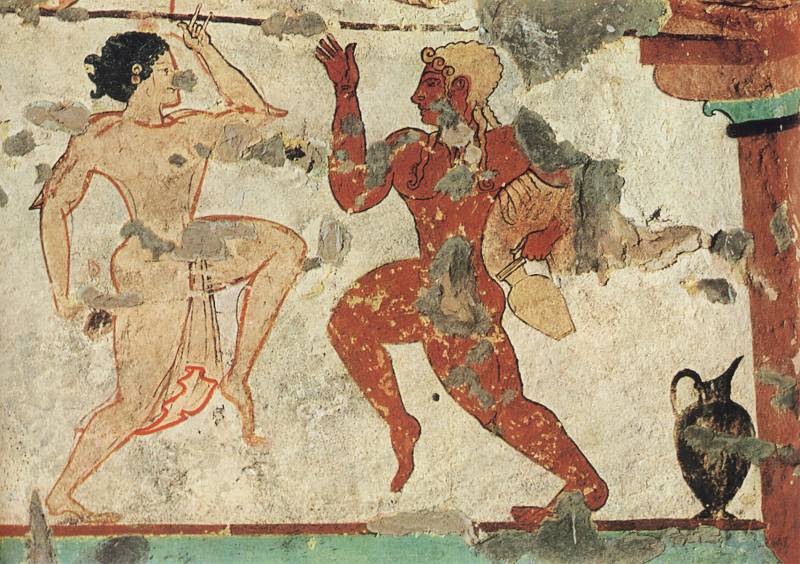 In Etruscan footwear, Eastern influence is also noticeable. The frescoes of men show sandals made of narrow interlaced straps, low shoes made of soft leather with long pointed toes curved upwards, very similar to those that later became popular in medieval Europe, and boots - in appearance the same as those of the ancient Persians ... And the Etruscans just as richly, in an oriental way, trimmed and decorated it, so that the Romans even called the richly decorated shoes Etruscan. There were also known "Tyrrhenian soles": wooden sandals with tight-fitting red leather, and even with gilding. They were tied up to the knee with purple straps. Such sandals were very popular among the Greeks of Asia Minor.

There was also a variety in hairstyles: the Etruscans could shave their heads baldly, like the Egyptians, they could cut their hair short, and also curl into small curls or, like the Spartans, wear them loose over the shoulders. But the Etruscans' beards were shaved. 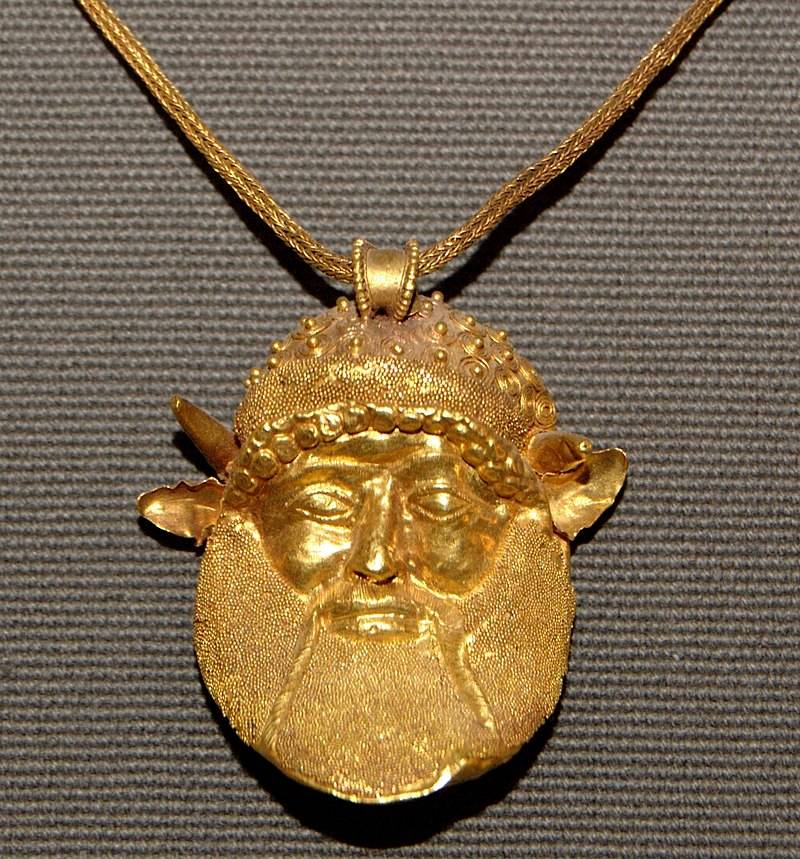 Male amulet. Around 460 BC e. (Louvre)
Women usually braided their hair in braids or curled it in lush curls. They pulled long curls down the back, and threw some over the chest. Complex women's hairstyles were also known to them. For example, hair was divided into strands, fluffed, and rolled on both sides of the parting. Moreover, these rollers were also intertwined with each other in different ways, that is, the hairstyle was very complex. Well - women of fashion have been at all times and among all peoples! 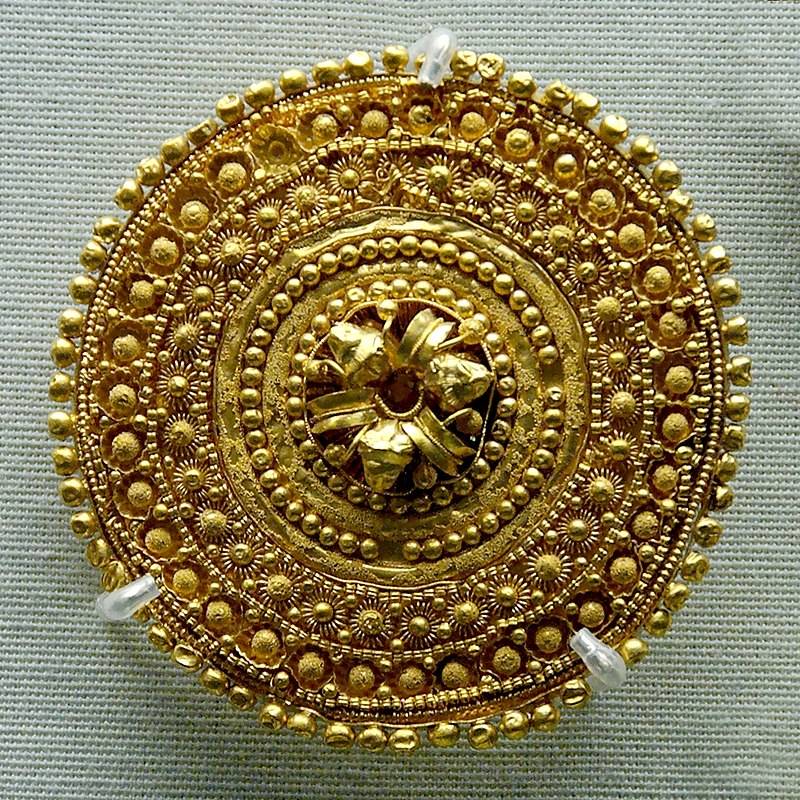 Goldsmiths recognized by everyone

But what the Etruscans outdid all the other peoples of the Apennines, and beyond, is in the art of jewelry, which they had developed extremely highly. They knew embossing, engraving and enamel art. They covered items made of cheap metals with thin plates of gold and silver. They made fine jewelry from amber, ivory, knew how to cut precious stones and colored glass. 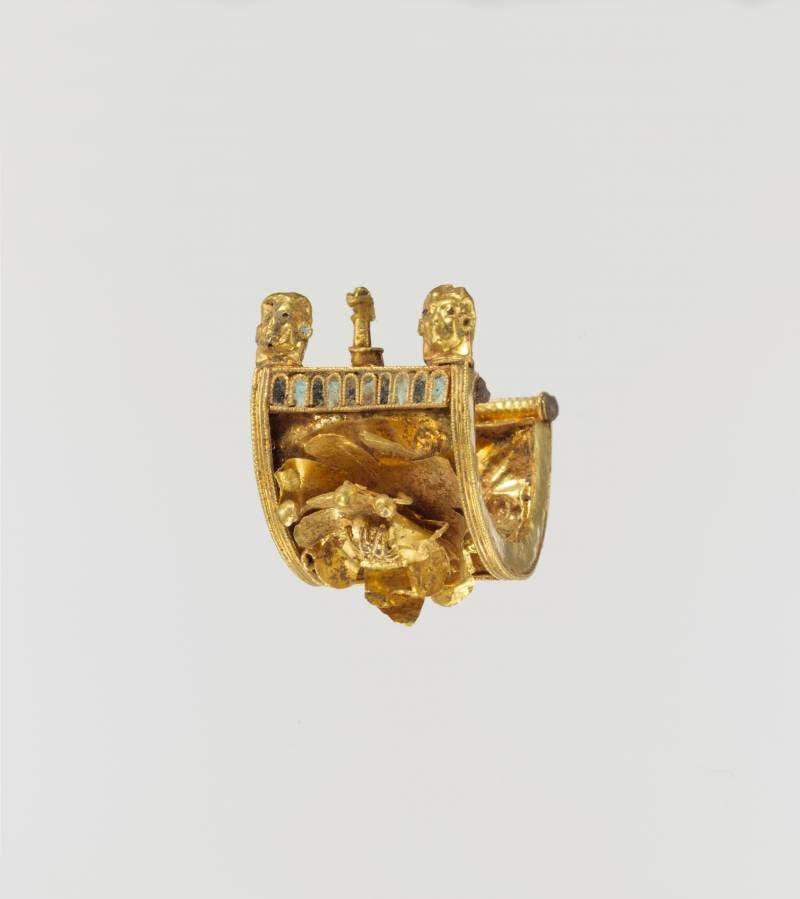 This earring is one of the most common types of Etruscan jewelry. At the very top, two heads have survived, depicting women in tiny disc earrings inlaid with enamel (originally there was a third). Immediately below, there is a strip covered alternately with lighter and darker blue enamel. The earrings are very complex in composition, but made with the highest skill. VI century BC e. (Metropolitan Museum of Art, New York)
Moreover, jewelry in Etruscan society was accepted to be worn by both men and women. Men adorned themselves with massive gold necklaces, wreaths of gold leaves, and bracelets in the form of notched rings, which were usually worn on the left hand. Women wore necklaces as well as graceful chains with pendants made of stones. Men, too, did not hesitate to wear chains around their necks, but they hung round medallions to them. Rings and signet rings were very popular and decorated with carvings. Tiaras decorated with precious stones and pearls, as well as pins with pommels, with which they pinned their long hair, were a specific female headdress. Earrings looked like rings or circles with pendants of various shapes. 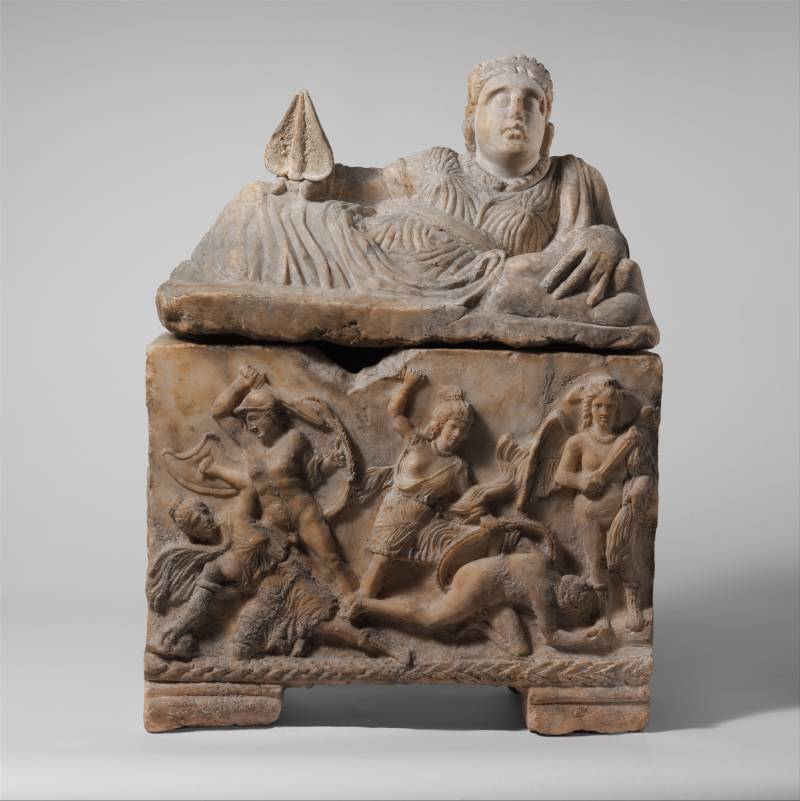 Etruscan sarcophagus III century. BC e. The reclining woman depicted on the lid wears a massive necklace and holds a fan in her right hand. The frieze depicts two pairs of Greeks fighting the Amazons, with the Etruscan death demon Vant standing on the right. Amazonomachy is well known from Greek art, especially since the XNUMXth century, and was often depicted in Etruscan art as well. (Metropolitan Museum of Art, New York)