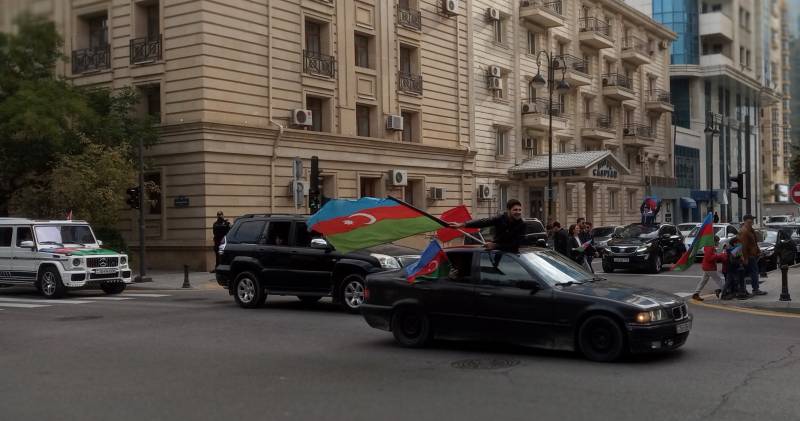 The agreements, which were signed in Moscow on November 10 of this year, envisage many issues that need to be resolved to end the military conflict in the Caucasus. But what is literally not a word about in this document is the current and future status of the very object of hostility - Nagorno-Karabakh. Nothing is said about the fate of this long-suffering land and its inhabitants. What will it be?

Naturally, Baku sees the region as only and exclusively an integral part of their own country. It is not so important whether Ilham Aliyev, who promises to the Armenians there “broad national-cultural autonomy” under the Azerbaijani flag, believes in what he says. It is much more important that the embodiment of these good intentions into reality is impossible during the life of at least two or three next generations. Most likely - it is impossible in principle.

Stepanakert, of course, can continue to play in "free Artsakh", pretending that in fact there are no Azerbaijani troops stopped a few kilometers away, nor the headquarters of the Russian peacekeeping contingent located in the city, which is today the only real defense of the Karabakh Armenians ... That's just to guarantee even the current extremely fragile, every minute balancing on the brink of a new war, the situation can be maximum for the next five years. Further - the darkness of uncertainty.

Most likely, it is this uncertainty, in the conditions of which no one will want to invest in the economy of this region, or even simply settle down firmly in it, will bleed and ultimately kill “free Artsakh” much more accurately, than Azerbaijani guns. Especially since all hopes for Yerevan's help in a really critical situation turned out to be a mirage, dispelled with the first volleys of guns. Moscow saved it, but its presence in the region is limited to a specific period.

What's next? Demarches of "Western democracies" like the resolution of the French Senate on "recognition of the Nagorno-Karabakh Republic", which Nikol Pashinyan clearly called in a rage "historical solution ”, do not stand, let's face it, absolutely nothing. The characterization of the beautiful gesture of the parliamentarians from Paris, sounded in Baku: “an empty piece of paper” is much closer to the truth, especially in the light of the fact that the French Foreign Ministry most hastily disowned it. We would only talk about Azerbaijan - options would be possible. But with Turkey standing behind him (and entering NATO), none of the EU countries will enter into real confrontation.

The words of the Armenian prime minister that “the recognition of Karabakh is becoming part of the international agenda”, rightly, look like a mockery given the fact that Yerevan itself has not been honored to recognize this republic during its entire existence and, apparently, is not going to do this and now. On the other hand, today the Armenian side really should not take such actions - Azerbaijan will certainly perceive such a diplomatic "feint" as an excuse for a new offensive, which will not stop under any conditions.

Ahead are new arduous negotiations, during which, most likely, each of the parties will again, as in previous decades, stand firmly on its own. And there is no time left: in five years, Baku can easily oppose the extension of the mandate of our peacekeepers. And then what? Start a war with him, which Russia does not need at all? Yes, both Paris and Berlin are now trying hard to "squeeze" themselves into the process of a peaceful settlement ... Surely, the Americans will arrive in time next year - how can they be without them. But it is hardly worth expecting anything from all these gentlemen, except for empty talk shops about "democratic values" and "human rights". Quite different forces will decide the fate of Artsakh.

In some domestic media I came across absolutely phantasmagoric ideas - like holding in this unrecognized republic ... a referendum on joining Russia "following the example of Crimea"! The most interesting thing is that at least a certain number of local residents, facing the almost inevitable prospect of becoming refugees, would follow this path quite voluntarily and with a dear soul. Another question is that such a turn of events is unlikely to find any understanding, not only in Baku, but also in Yerevan. There is nothing to say about the "international community". Yes, and such a "gift" is unlikely to benefit Russia.

Given the current geopolitical configuration, the most realistic scenario for Nagorno-Karabakh is, alas, the gradual abandonment of it by the Armenian population and the subsequent absorption of the region by Azerbaijan. In accordance with international law and UN resolutions ... However, five years is quite a long time, and while it blows, much can still change - in Yerevan, Baku, Ankara. And indeed in the world. The only thing that now remains for "free Artsakh" is hope. And she, as you know, dies last.

Ctrl Enter
Noticed oshЫbku Highlight text and press. Ctrl + Enter
We are
A great interview with Sergey Lavrov: about Ukraine, Obama and IranWhat you didn't want to know about England
Military Reviewin Yandex News
Military Reviewin Google News
63 comments
Information
Dear reader, to leave comments on the publication, you must sign in.