Israel prepares for war with Iran, which does not want to fight 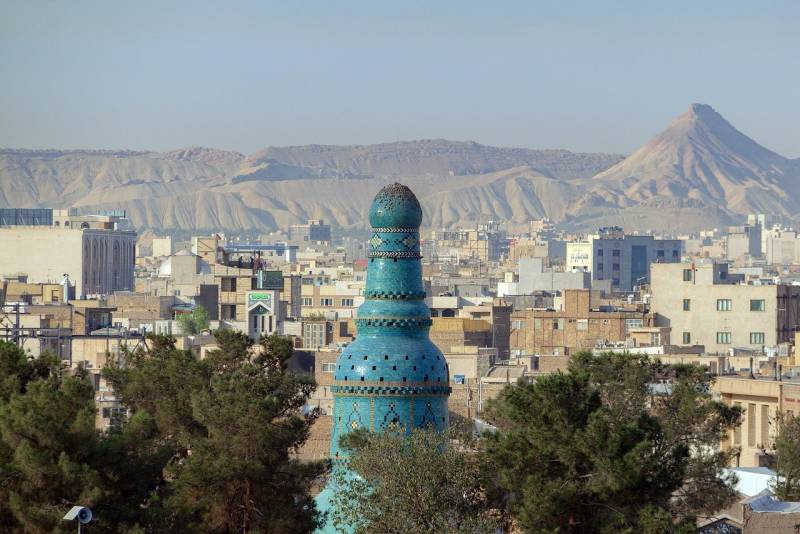 We live in interesting times. The time when, in order to attack another state, it is enough to conduct very small exercises and launch a big "duck" into the information space. There is no need to bring in your troops, there is no need to risk the lives of soldiers and officers. The opposing side will be wary anyway, spending a lot of effort and money to eliminate the "danger".


And you can do it differently. Prepare your own blow, but launch a "duck" that a much stronger opponent will beat you. The main thing is to choose the time for such an operation. The time when the "big brother" is already cared for everything, when he is busy with his own affairs within his state and a little lost control over the actions of his own generals outside the country.

Americans again decided to punish Iran for its nuclear program

So, yesterday the media reported with reference to Fox News, which, as usual, refers to unnamed sources in the intelligence community, about the possibility of the US army striking Iran's nuclear facilities. On what basis the Americans will strike, nobody cares. The main thing is to stir up the information space. The main thing is to talk about it.

And right there, with reference to a truly informed American information-analytical portal Axios, information appeared in the press about the preparation of the Israeli army for a possible "big war" in the region. The Israelis talked about an imminent Iranian attack on their country in response to the US strike.

Meanwhile, again referring to the Axios portal, the American intelligence community says that the United States has no need to deliver such a strike. As there is no data on the inevitability of such a strike. So who to believe? Israelis who are already preparing for war, or Americans who do not know about this war, although they do not exclude the possibility of certain difficulties in connection with the character of Donald Trump and his loss in the elections.

There is an excellent way to verify the information received. It is enough to go back some time and analyze the actions of the parties during this period. Words are always perfectly verified by deeds.

Let's start, naturally, with the possible aggressor - the United States. Donald Trump did discuss with his senior advisers some time ago the possibility of a strike on the Natanz uranium enrichment plant. This is a fact confirmed from several sources.

Earlier, Trump was informed by US intelligence about how much weapon-grade uranium Iran has today. Trump was also informed about the content of the report of the International Atomic Energy Agency - about the growing reserves of enriched uranium in Iran. However, nothing is known about the decision reached by the advisers and the US President.

There are also quite controversial facts. According to the Central Command of the US Armed Forces (USCENTCOM or CENTCOM), a week ago, the Americans deployed B-52H strategic bombers to the Middle East. There is a message about this on the official CENTCOM website:

The B-52H Stratofortress crews from Squadron 21, stationed at Maino Air Force Base in North Dakota, quickly flew to the Middle East on November XNUMX to contain aggression and confirm the support of US partners and allies.
There is one more news from the same source, which is worth paying attention to. This is the transfer of a squadron of F-16 fighter-bombers from the Spangdalem airbase in Germany to the Al Dhafra airbase in the United Arab Emirates. Moreover, it is alarming that the squadron has been transferred to the UAE along with ground support personnel.

The 480th Fighter Squadron willaviation preparation for hostilities, practice the rapid deployment of American troops anywhere in the world at any time. " The 480th Squadron is part of the 52nd Fighter Aviation Regiment at the Spangdahlem Air Base in Germany. From there, the US Air Force fighter-bombers, along with ground support personnel, were transferred to the Al-Dhafra airbase in the Arab monarchy in the Persian Gulf.
Everything seems to be clear. The Americans are really going to strike at the Natanz plant. It remains to understand why. And this is where some strangeness comes to light.

The opposite side, Iran, sheds some light on it. Advisor to Iran's Supreme Leader Ayatollah Sayyid Ali Khamenei, former Defense Minister Hossein Dehgan, in an interview with the Associated Press on November 19, let out one unknown detail:

Trump is well aware that any war, even a very insignificant and quick one, is a political death for him. And given the fairly serious strengthening of Iran's air defense in recent years, the Americans will not be able to bomb without losses. Yes, and the very nuclear program of Iran, no matter what is said about it in the world, the Americans are deep in the drum. there is weapon from Pakistan and India, so what? Does this somehow affect international relations?

Or maybe the wind blows from the other side

But there is a state for which the appearance of another nuclear power, especially in the Middle East, is like death. This is a state that "has no nuclear weapons, but try to take them away from us." Yes, that very poor Israel, which today is strenuously preparing to repel the attacks of aggressive Persians on its territory.

We somehow forgot about some aspects of Israel's foreign policy. In particular, for some reason, the famous "doctrine of Menachem Begin," the former prime minister of Israel, is hardly mentioned anywhere. And I will remind you for those who do not know or deliberately "forgot". This is how Professor Arie Naor, Begin's closest aide and secretary to his first government, formulates the doctrine:

Menachem Begin established the doctrine that the State of Israel should not allow an enemy country to develop a potential for its destruction.
How is the Iranian nuclear program related to the “potential to destroy Israel”? Let me remind you again an episode from the era of Begin's reign. Who in June 1981 gave the order to the Israeli Air Force to bomb the Osirak nuclear reactor in Iraq? Personally, Prime Minister Menachem Begin!

And one more fact that General Herbert McMaster, Trump's adviser, said in a recent interview with Fox News. For what purpose did Israel launch airstrikes on certain targets in Syria in September 2007? The US intelligence community has a clear answer to this question. The strikes were struck at exactly the places that Israel's intelligence pointed out as the places where nuclear weapons are being developed.

The interview, as I wrote above, was given by Fox News on November 12th. And what is the difference between the Iraqi reactor and the Syrian or Iranian, from the point of view of the Israelis? According to Begin's doctrine, nothing. This means that it must be destroyed by any means.

So maybe it's not Trump who wants to strike Iran, but the Israelis are trying to set fire to the situation? Maybe the weekly conversations of Israeli Defense Minister Benny Gantz and acting Pentagon chief Christopher Miller is not about defense cooperation? And Israeli Prime Minister Benjamin Netanyahu flew to Saudi Arabia in company with Massada Yossi Cohen in order to simply see Crown Prince Mohammed bin Salman and American Pompeo.

And Pompeo himself just on the way visited several countries of the Persian Gulf and again stopped in Israel to see his friend Benjamin. Particularly serious are the statements of the head of the US Foreign Ministry that the purpose of his meetings with all these politicians is to limit Tehran's ability to support militias in Syria, Lebanon and Iraq. But this is said with a very serious face. We have to believe it.

The announcement of a possible attack did not cause much panic in Tehran. Iran reacted calmly to all this fuss, perfectly aware of its own strength and the greatly diminished capabilities of the Americans and Israelis. The same adviser to the Supreme Leader of Iran, Ayatollah Sayyid Ali Khamenei, former Defense Minister Hossein Dehgan, in the above-mentioned interview with the Associated Press, albeit in a harsh manner, quite calmly stated the possibility of a major war in the region.

Hence, the situation in the Middle East is exacerbated. It is impossible to name the right and the wrong in this conflict. Everyone has their own truth. And these truths are different. It is also difficult to predict how events will develop. So it only remains to wait for the development of events ...

Ctrl Enter
Noticed oshЫbku Highlight text and press. Ctrl + Enter
We are
The tragedy of the American army ("The Atlantic", USA)Situational analysis of the death of the MH17 flight (Malaysian Boeing 777), made on the basis of engineering analysis from 15.08.2014
Military Reviewin Yandex News
Military Reviewin Google News
372 comments
Information
Dear reader, to leave comments on the publication, you must sign in.