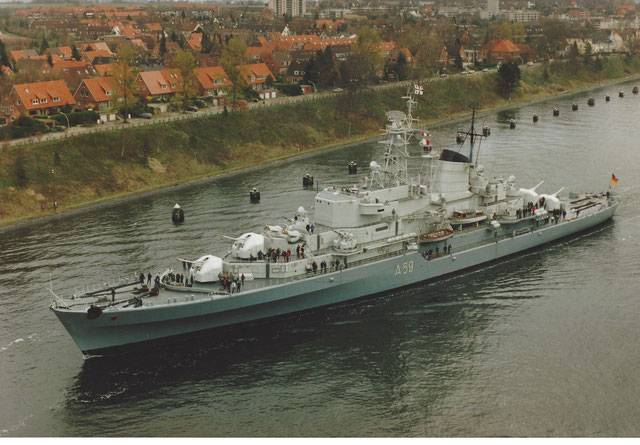 Translation of the article "Wir gratulieren der Deutschland", published in the German anthology "Schiff Classic" for 2020.

Translator's note. In Russian-language sources, this ship is often called a cruiser, there are even such "pearls": "Deutschland became the smallest German cruiser after 4385-ton Brummer and Bremse", "had too light weapons for its size (without missiles). The technical equipment was rather impractical and varied, adapted for educational purposes. " What really was this really strange, but at the same time very beautiful ship?

The first years of the Bundesmarine's existence were characterized by a rapid growth in the number of ships. At first, these were ships and boats inherited from the maritime border guard, then significant assistance came from new NATO partners. In parallel with this, a large-scale shipbuilding program was launched. A large number of ships and boats of various classes were built, one after another entering into service. All of them had to be manned by well trained crews. For this, the fleet needed a modern training ship. Its design and construction were included in the shipbuilding program.

The military presented two main requirements to the shipbuilders:
- accommodation for 250 cadets;
- equipping the ship with the maximum possible number of weapons systems, electronic and electromechanical equipment, similar to that available on the warships of the fleet.

This was not an easy task for the designers. In addition, this, of course, led to an increase in the size of the ship, which, in turn, required a special permit from the Western European Union (WEU). Indeed, at that time the FRG had the right to build warships with a displacement of up to 3 tons.

After an official request, WEU in the fall of 1958 issued permission to build a ship with a displacement of 6 tons, the document also stipulated the parameters of the maximum speed and armament.

For a ship of this size, it seemed possible, at least in the event of war, to perform other tasks. Therefore, the development took into account the possibility of quick and inexpensive conversion into a minelayer, military transport or hospital ship. 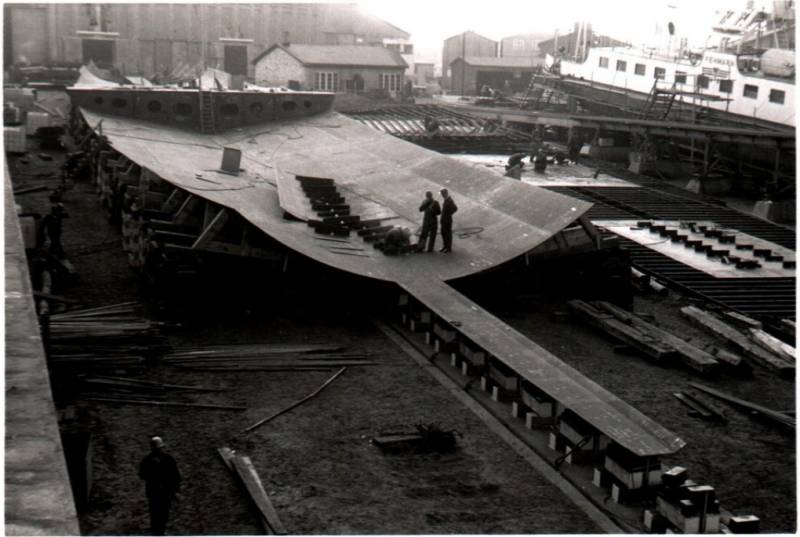 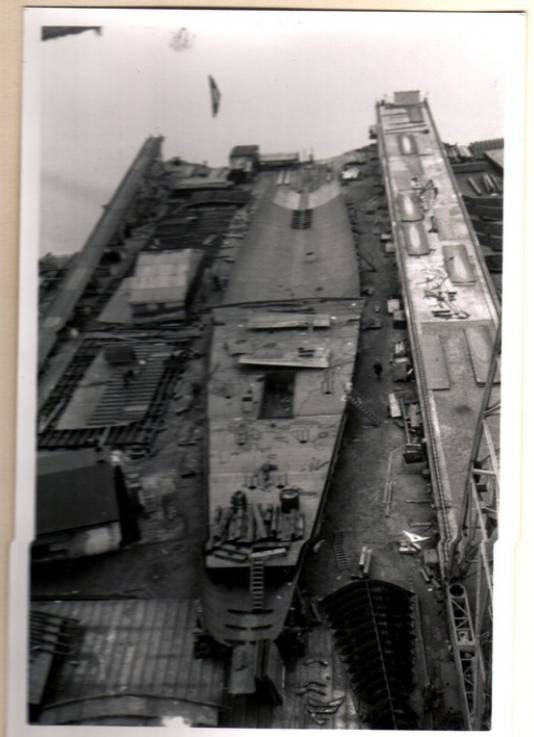 On September 17, 1959, the ship was laid down at the Nobiskrug shipyard in Rendsburg. A year later (November 5, 1960), he was launched. Initially, it was going to be called "Berlin", but for political reasons this was abandoned. And at the launching ceremony, the wife of the then President of the Federal Republic of Germany Wilhelmina Lubke named him "Deutschland" (Deutschland). 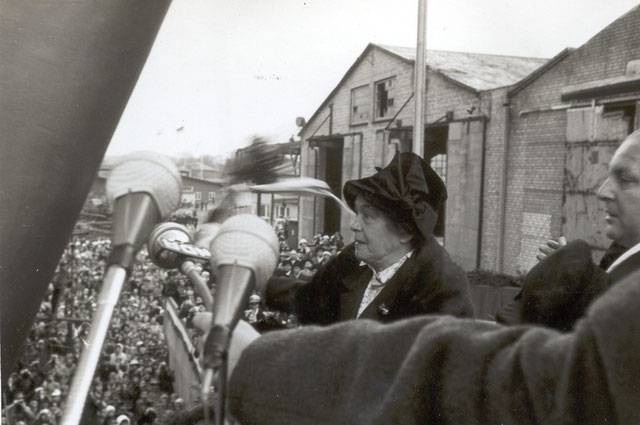 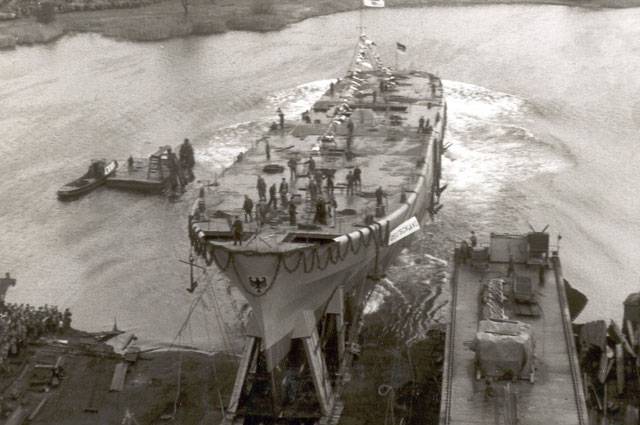 “This is not a class 1 combat ship. It is designed to fulfill the important task of training seafarers. Therefore, armament and high speed do not matter as much as the conditions that ensure the educational process ",

- so said at the launching ceremony the inspector of the Navy, Vice Admiral Friedrich Ruge.

Another two and a half years passed before the flag was raised over the Deutschland. 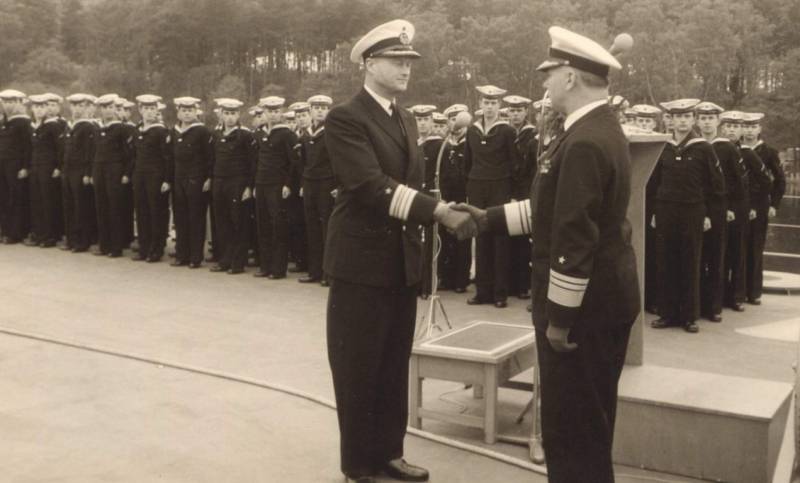 The project cost was 95 million marks.

Initially, "Deutschland" became part of the Command of training ships, and from October 1, 1966 until the end of his service, was transferred to the disposal of the naval school in Muervik. 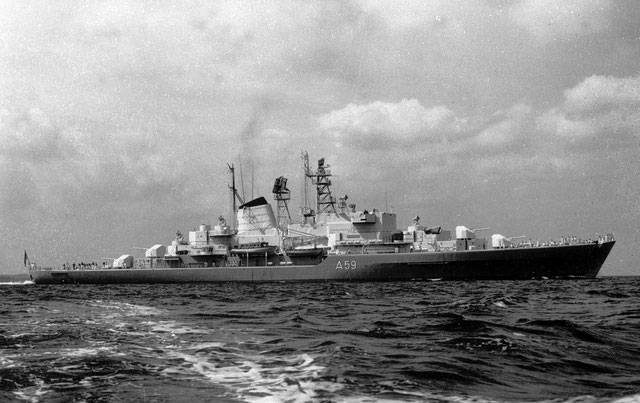 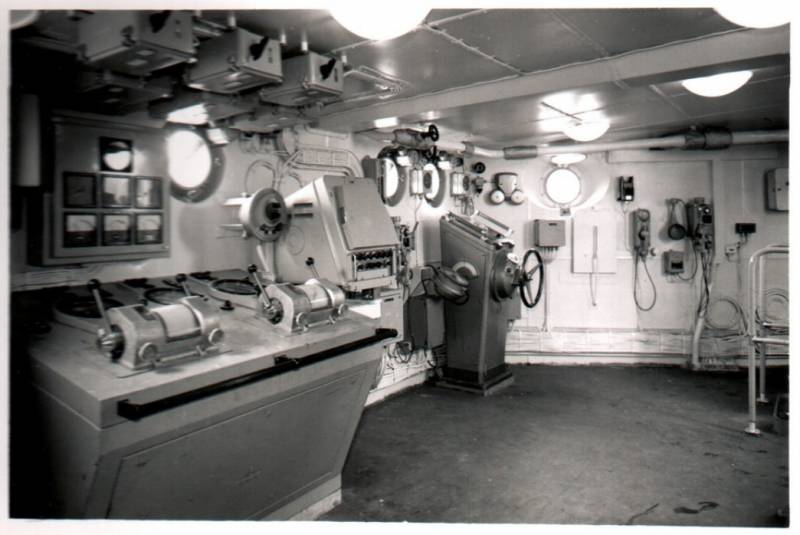 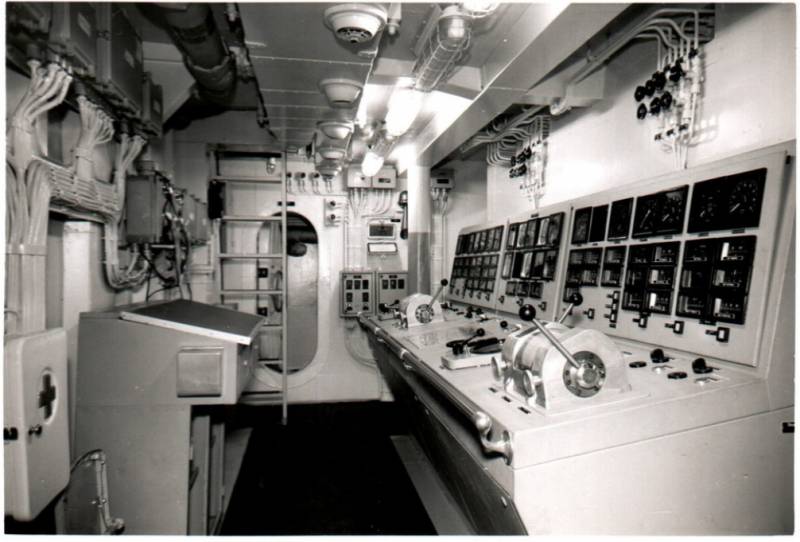 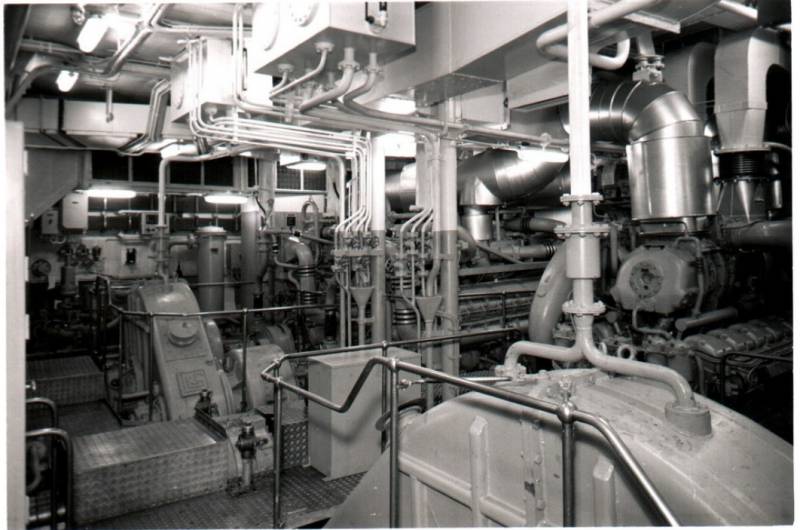 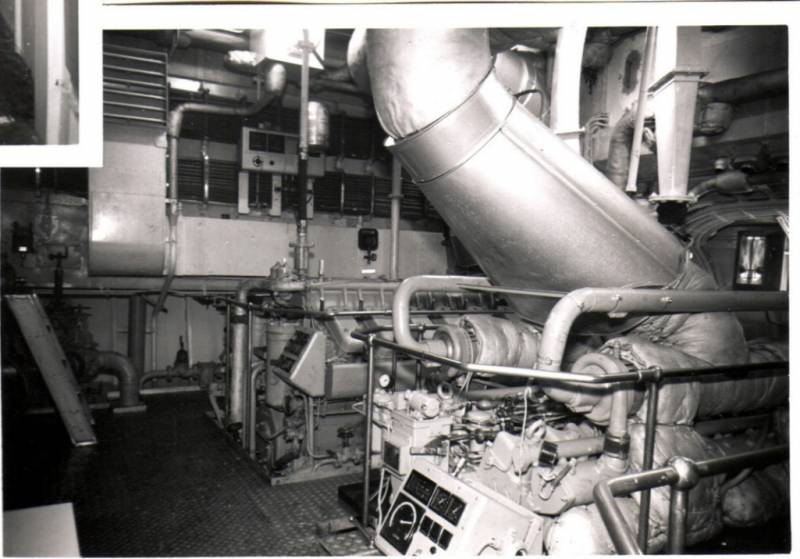 When designing weapons, they were guided by warships under construction.

The artillery consisted of four 100-mm guns in single-gun turrets, located in a linearly elevated position, two at the bow and at the stern of the ship. 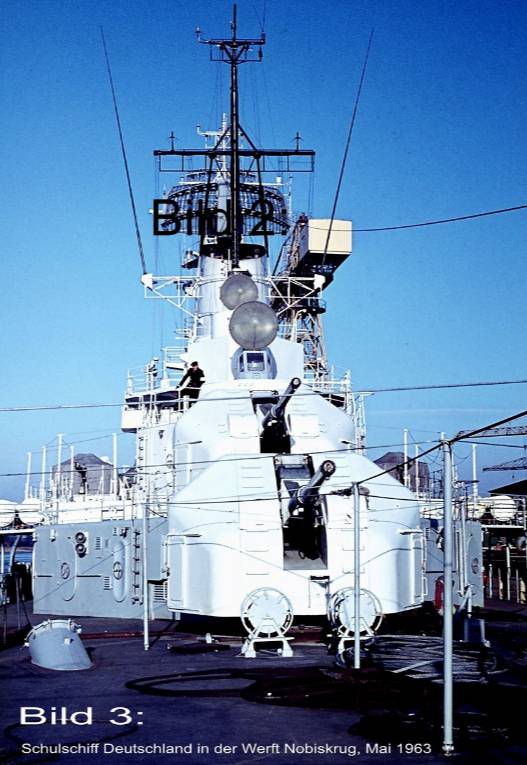 Main caliber gun mounts. Fire control stations are above them. 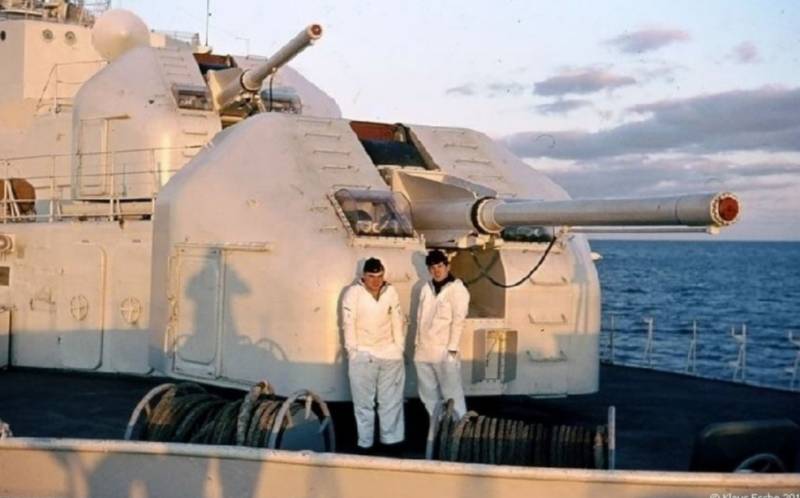 They were supplemented with two single-gun 40-mm Bofors installations and two twin, as well as 40-mm Breda installations. 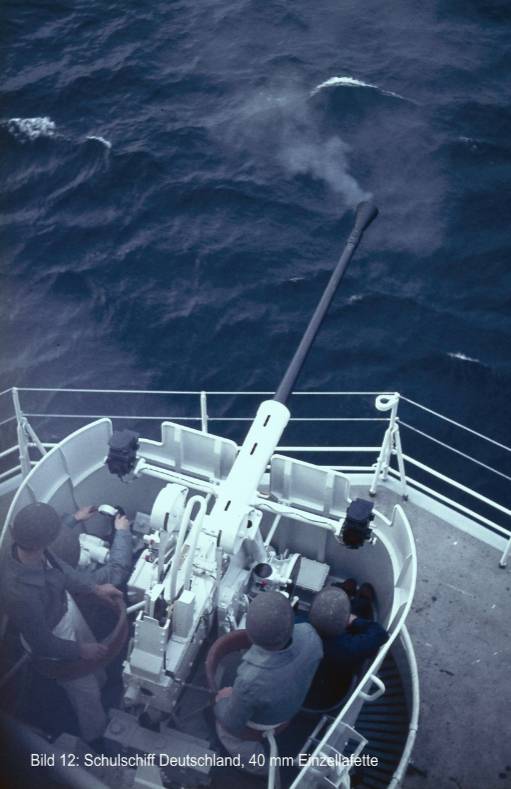 To combat submarines, there were two Bofors four-tube rocket launchers. 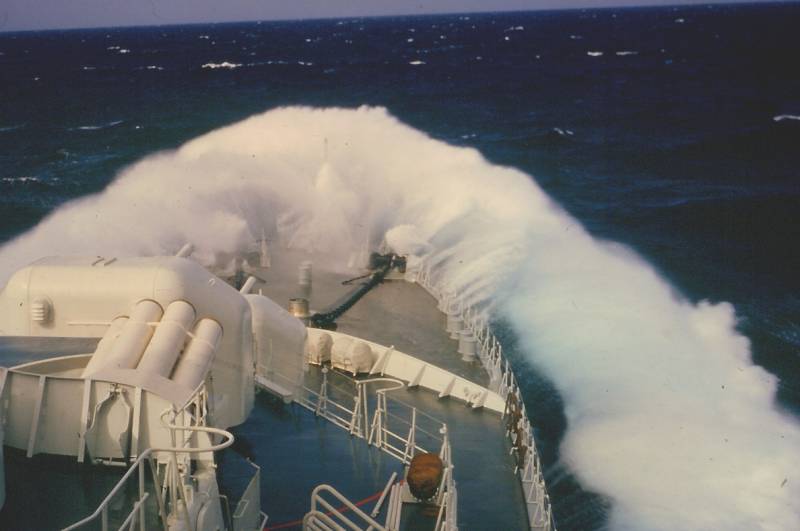 There were also devices for dropping depth charges.

Until the mid-70s, there were two fixed 533-mm torpedo tubes at the stern.

If necessary, it was possible to install 75-meter mine guides.

The electronic equipment also corresponded to that used on warships under construction.

For 27 years of service, the training ship with tail number "A59" made 42 foreign voyages, during which he visited 75 countries and 230 harbors. 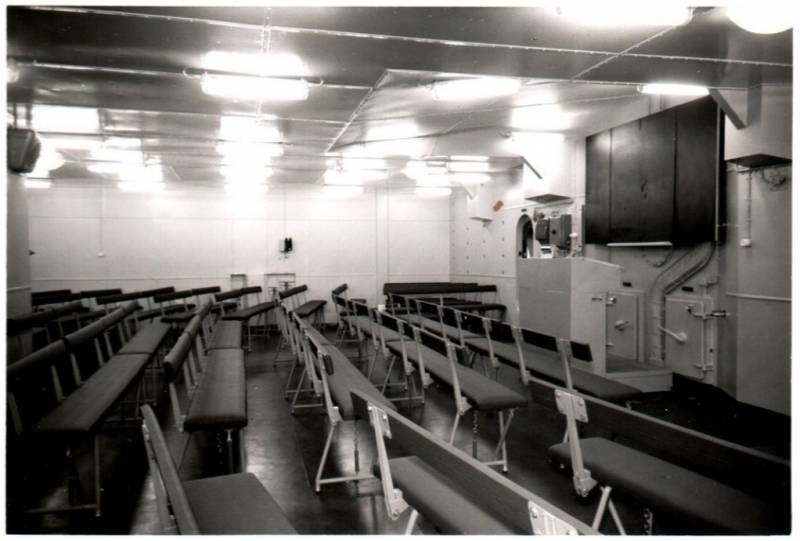 Astern, he left 725 nautical miles, which is approximately 000 the length of the equator. 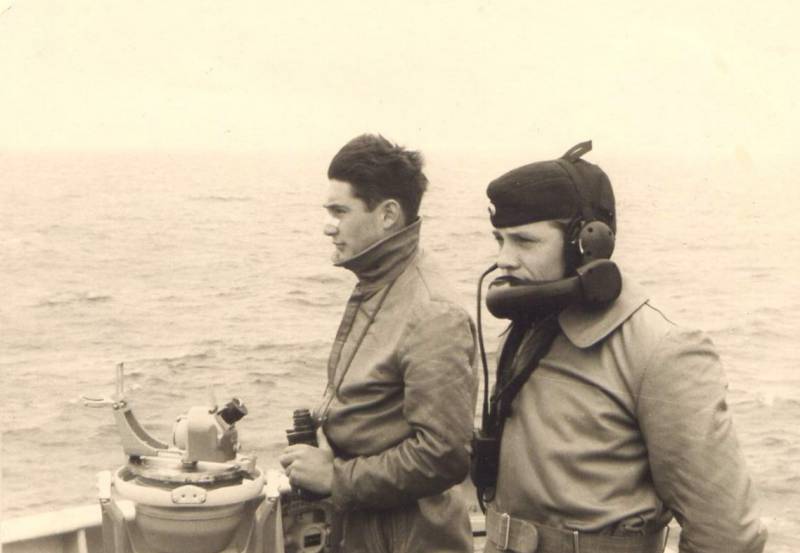 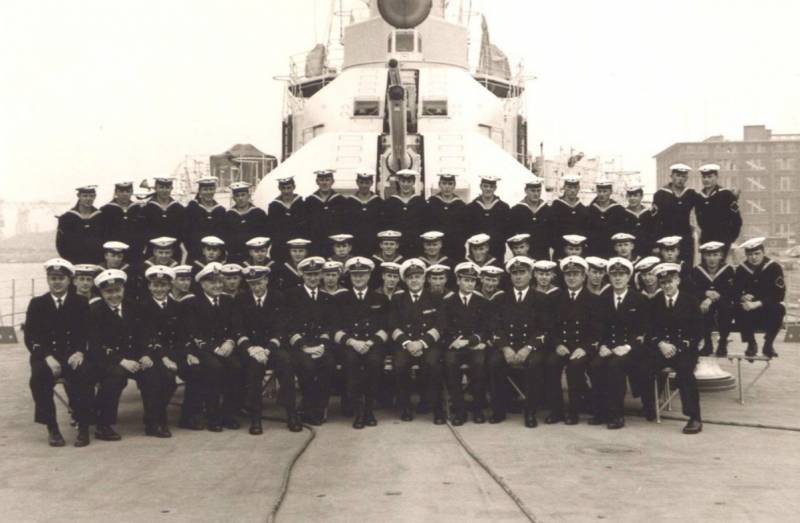 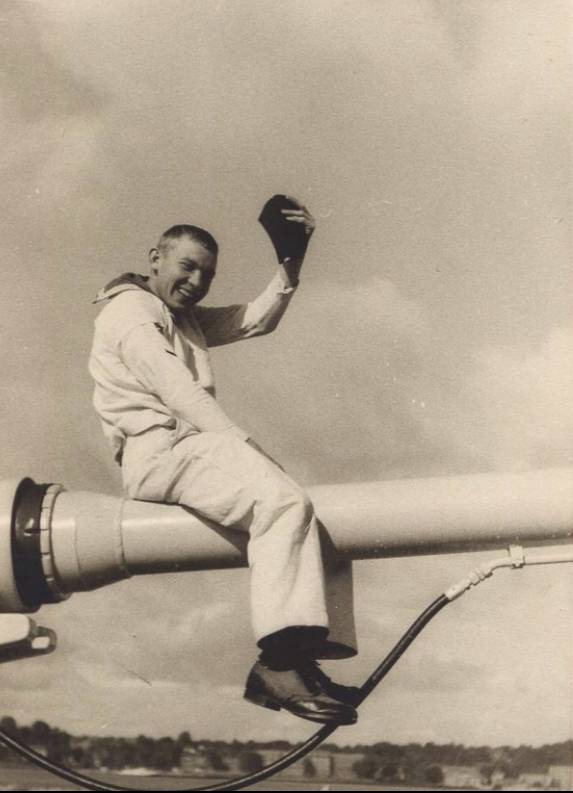 All over the world, officers, sailors and cadets of the Deutschland ("envoys in blue") represented their country. Chancellors and presidents of the Federal Republic of Germany also made their foreign visits there. 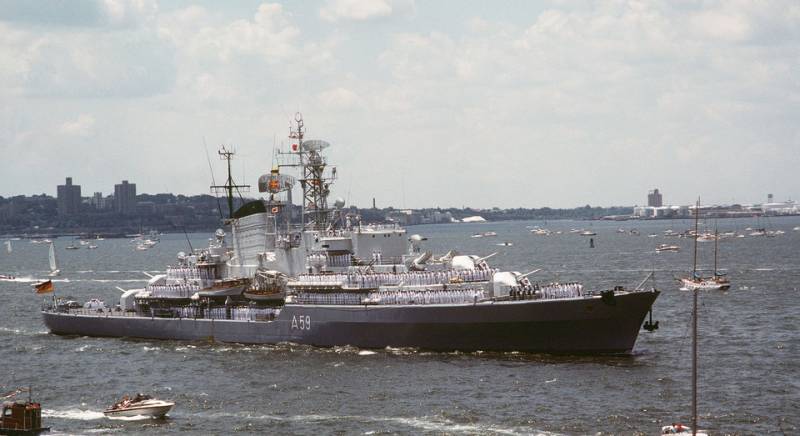 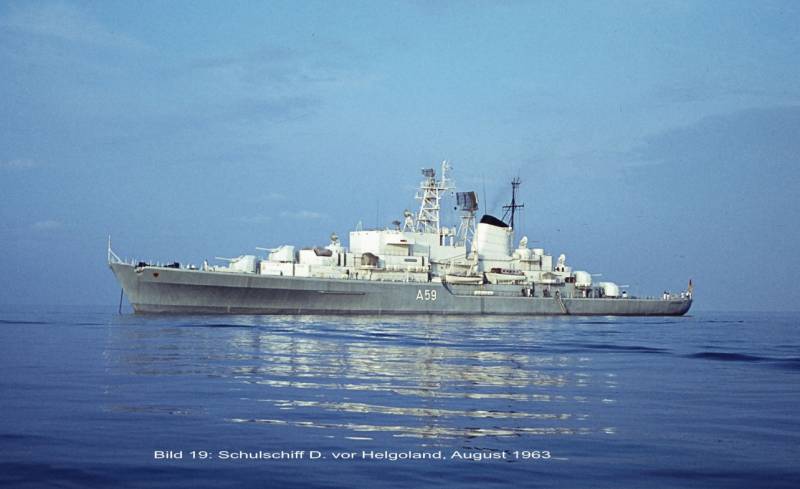 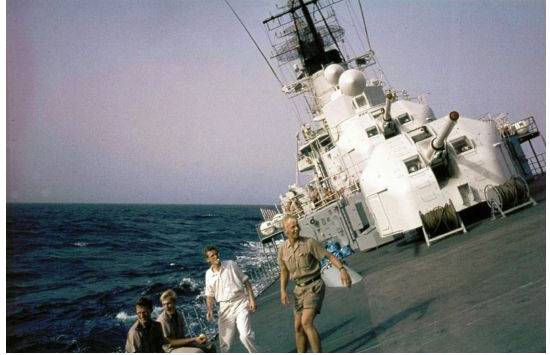 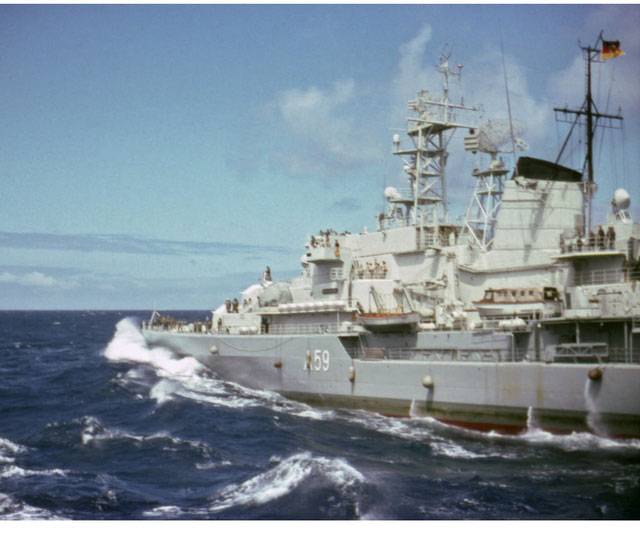 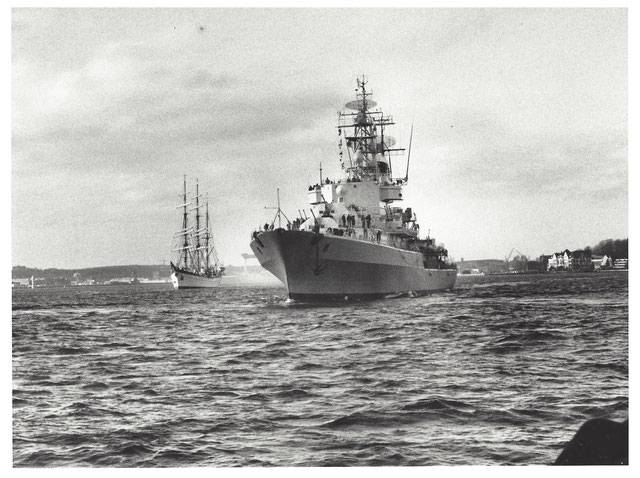 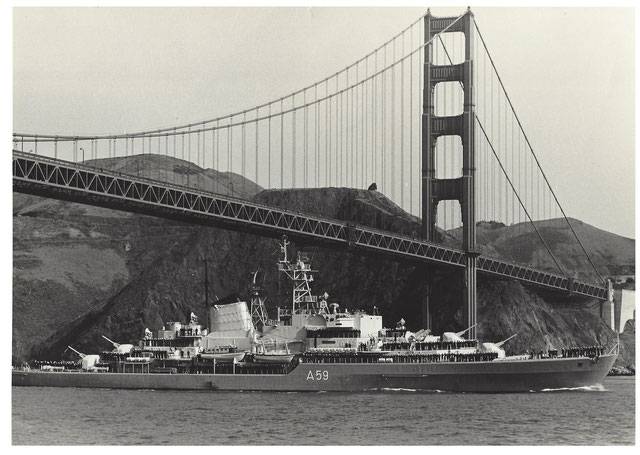 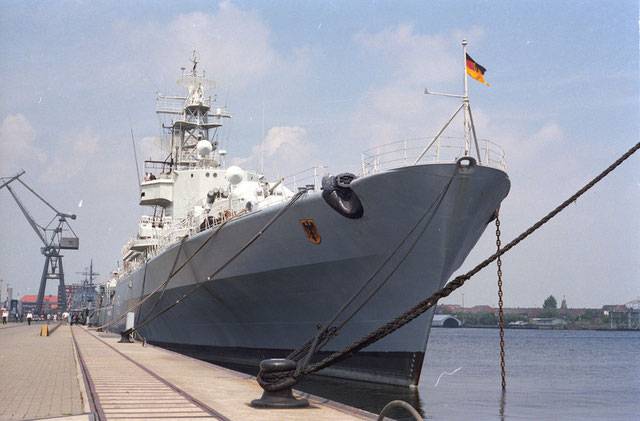 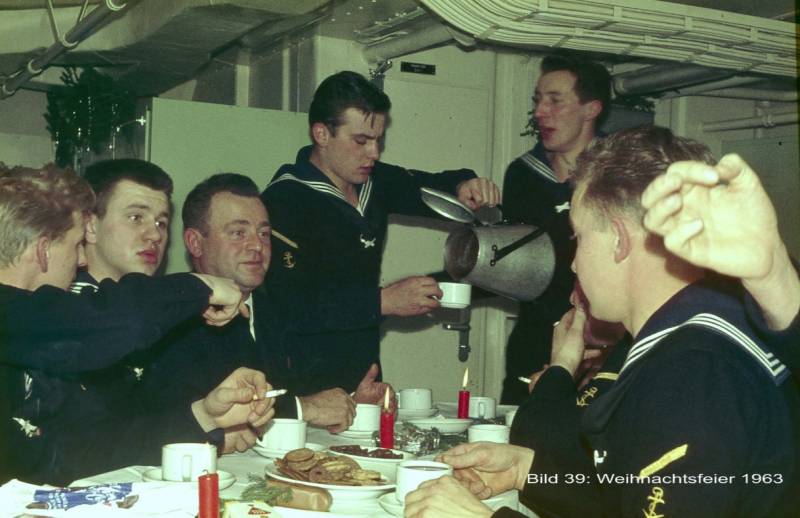 But as time went on, the ship was not getting younger, the cost of its maintenance grew. Major repairs and modernization were required, the cost of which was estimated at 40 million marks. All this led to the fact that in June 1989 a decision was made to exclude him from the fleet. In March 1990, Deutschland made her last sea voyage to the naval arsenal in Wilhelmshaven. 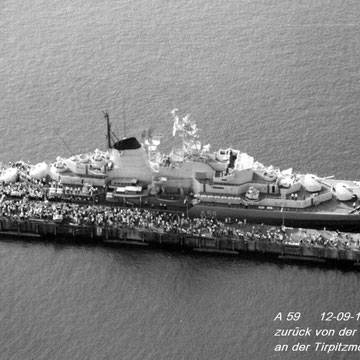 The struggle to preserve the honored ship began. There were projects to convert it into a museum or a floating hotel, but they were not implemented. This required very high costs of disarmament and bringing it into line with civilian standards. In addition, high operating costs were expected.

As a result, in 1993 the ship was sold for scrap and towed to the Indian Alang, where it ended its days. Since then, cadets have been trained on ordinary ships of the Bundesmarine.

Other equipment:
- 2 taps
- 3 anchors (one at the stern, two at the bow).
Ctrl Enter
Noticed oshЫbku Highlight text and press. Ctrl + Enter
We are
Combat ships. Cruisers. A family of perfect pirates"Svetlana". History of creation
Military Reviewin Yandex News
Military Reviewin Google News
28 comments
Information
Dear reader, to leave comments on the publication, you must sign in.