Germans in the mud 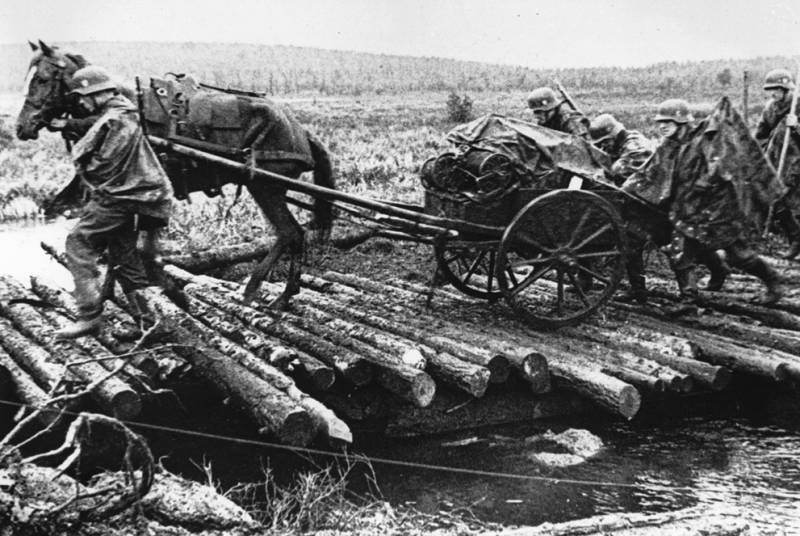 A photo showing a typical Schlammperiode transport arsenal: a slope road and a light horse carriage.

We have the opportunity to continue the theme of the relationship between the Wehrmacht and muddy roads. Since in the digitized archive of the TsAMO RF, several documents were discovered, dedicated specifically to the issue of measures to combat thaw, which were taken at the divisional level.

In a previous article considered information about roads on the territory of the USSRthat were known to the Germans before the invasion. From the article it followed that the roads would be very bad and a significant part of the Wehrmacht, especially the infantry divisions, would have to operate in muddy conditions. In addition, the Germans had experience gained before the start of the war with the USSR in Poland. for the roads leading to the border established in 1939 were also bad. The Germans also had to carry out the transfer of troops to the Soviet border in the fall of 1940 and in the spring of 1941 in muddy conditions.

The myth that the German offensive was hampered by mud was and remains very tenacious and is often repeated. Although, even a general overview of the fighting shows that the thaw was not an obstacle for the German troops. They managed to carry out several offensive operations in the fall of 1941: the offensive on Tikhvin in October - November 1941, the offensive on Tula at the end of October 1941 (despite the heavy mud noted in the Army Group Center's combat log), when German troops week passed 139 km from Mtsensk to Tula. The attack on Kalinin (Tver), when the Germans passed 153 km from Rzhev to Torzhok. And to Kharkov and Donbass in October 1941, when the Germans passed from Zaporozhye to Horlivka 284 km.

By the beginning of 1942, German formations had already accumulated considerable experience in combating thaw. And on its basis, the orders gave specific instructions on what and how to do so that the muddy roads did not interfere with the hostilities. They had their own terms for muddy roads: Schlammperiode or Schlammzeit. They were preparing well in advance for this season.

The 3rd motorized division of the Germans in February 1942 defended in the area east of Vyazma and participated in repelling the Soviet offensive during the Rzhev-Vyazemsky operation. The command of the division was concerned with the problem of the coming muddy road at the end of February 1942, due to the fact that the deterioration of the road condition was to be expected from March 15.

On February 25, 1942, the division was ordered to take measures during the thaw. It explicitly states that these measures were developed based on the experience of the autumn thaw and inquiries of the local population. They included: 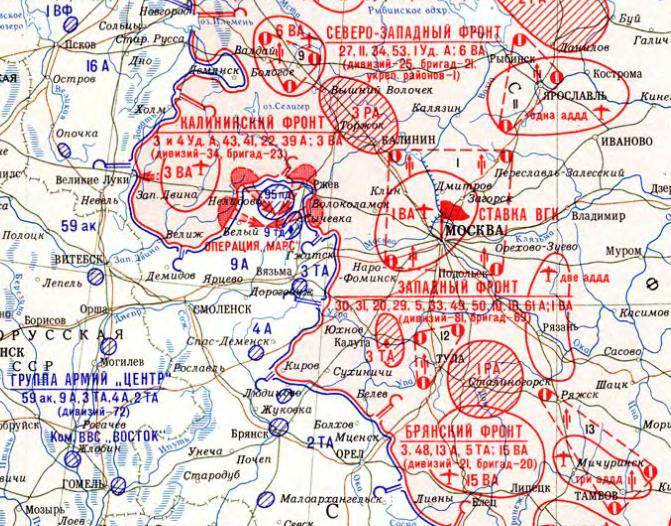 General scheme of the front in 1942 in the sector of Army Group Center. In the middle, east of Vyazma, was the 3rd Motorized Division.
This order was issued on the basis of an order from the command of the 5th Army Corps issued on February 23, 1942 (the headquarters of the 3rd Motorized Division received it on February 26). And the order of the corps was based on the order for Army Group Center, concerning the Smolensk-Gzhatsk highway.
The instructions from the corps command boiled down to the following measures:

- a ban on leaving cars on the road, in order to avoid snow drifts,
- the introduction into force for the period of thaw on one-way roads "block systems",
- a ban on traffic during the thaw period of transport weighing more than 12 tons and a gauge of more than 2,05 meters,
- limiting the speed limit at 25 km per hour. 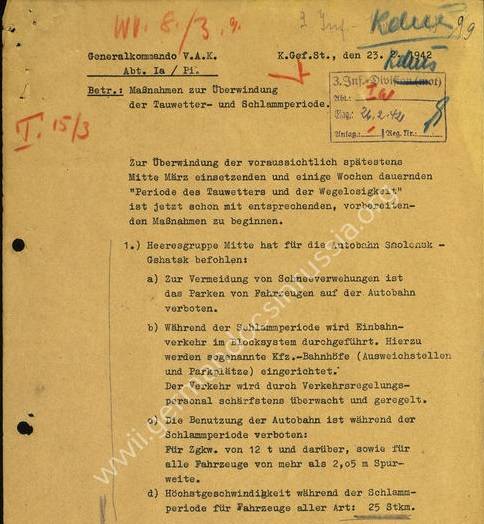 Order of the 5th Army Corps on measures for the period of thaw.
The "block system" meant limited traffic on the road. Cars were stopped at a certain point equipped with a parking lot. Then a column was formed from them, which followed through the section of the road. The columns alternated back and forth, depending on the needs for transportation and the urgency of the goods. Convoys with a limited number of trucks were less likely to crash the road. There were gaps in traffic when the road could be fixed. And also there were no traffic jams and accumulations.

Also, the corps command ordered the introduction on supply roads (in the 11th tank, 106th infantry, 5th tank, 3rd motorized and 20th tank divisions) transportation by light trucks and draft carts (TsAMO RF, f. 500, op. 12477, d. 66, sheets 9-10 ). Light sled carriages could travel everywhere, up to the forward positions. And for them all sorts of sledges or mud drags were provided, designed to deliver small loads. Light trucks could only move on paved roads or on a slope. The order contains a warning (TsAMO RF, f. 500, op. 12477, d. 66, l. 11):

"In general, attempts to carry out all transport with trucks runs the risk of further loss of trucks." 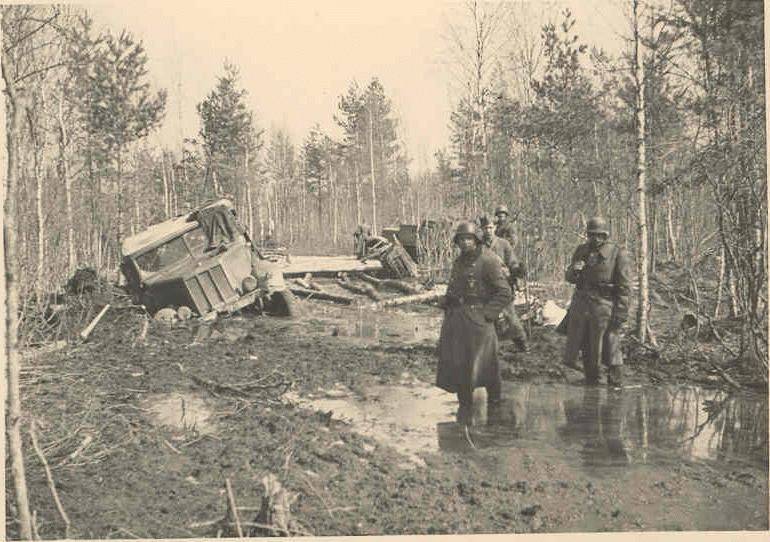 Many photographs illustrate the validity of this warning about the loss of trucks in muddy roads.
All this was accepted for execution. On February 27, 1942, an order was issued for the 3rd Motorized Division, in which the order of the corps was communicated to the subordinate regiments. At the disposal of the division was the Vyazma - Shimonovo - Isakovo supply road, on which the procedure for closing the road for vehicles for 5-8 days of maximum thaw was established. And also the closure of the road at noon on the following days (TsAMO RF, f. 500, op. 12477, d. 66, l. 5). 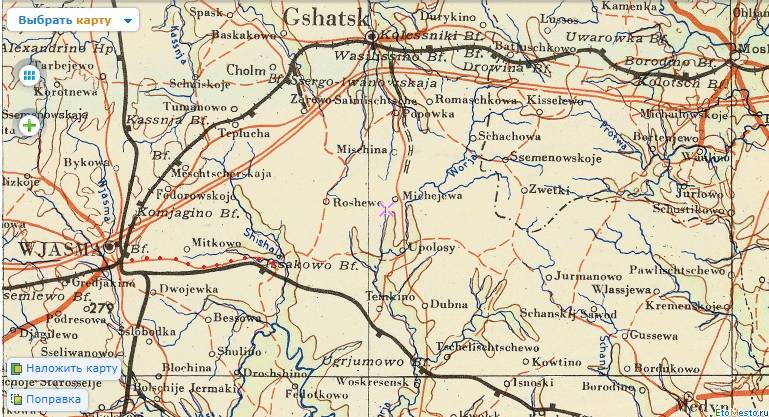 The location of the 3rd motorized division on the German map. Red dots mark the Vyazma - Isakovo road
These documents got to TsAMO in a roundabout way. The 3rd Motorized Division was transferred to Army Group South in the summer of 1942, attacked Stalingrad and was destroyed there. These notes about the muddy roads near Vyazma, obviously, come from the Stalingrad trophies.

When the mud is strong

Another example of German measures against muddy roads is the documents of the 466th Regiment of the 257th Infantry Division, drawn up at the moment when the division was defending the area around Barvenkovo. The order on instructions for the thaw period was issued on February 18, 1942 (and received by the regiment headquarters the next day). Shortly before that, during the Barvenkovo-Lozovskaya operation of the Southwestern and Southern fronts in January 1942, the Barvenkovo ​​ledge was formed. At the end of January 1942, the Soviet offensive stopped. But the fighting continued until the end of March, when a thaw began, delaying the fighting in the area until early May 1942. This is how the 257th Infantry Division prepared for this muddy road.

The order immediately warned that the thaw would be more severe, due to the abundant snowfall at the beginning of the year. Such that many areas and settlements will be cut off from transport for many weeks. The division headquarters suggested that the headquarters of the subordinate regiments be guided by the slogan "Hilf dir selbst!" (Help yourself).

Realizing that the mud will be strong (it will hinder the actions of the enemy), the command of the division ordered to take up the defense of the existing positions. Fortified defensive posts were built on various heights free from melt water.

They were supplied with supply roads along which light horse carts could move. Snow was removed from these roads, and then they were strengthened with brushwood fascines, perch and other materials at hand. If the road was flooded with melt water, then it was necessary to have at disposal signs and detour indicators. Before the thaw began, trucks and vehicles had to be driven to points with solid roads (to Slavyansk or Kramatorskaya). Their further use was supposed by special order.

In order for battalions and companies to be able to fight and move during a period of severe thaw, a recommendation was given to create columns of pack animals, as well as columns of carriers from the local population or prisoners of war. It was recommended for them to make drags and shoulder stretchers. For foot porters, trails were laid, reinforced with boards, slabs or poles. 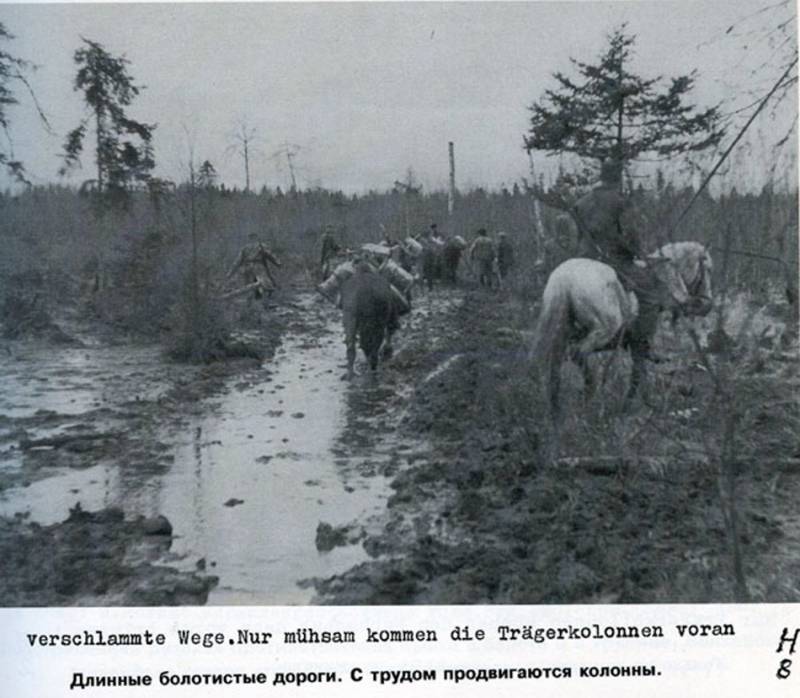 Column of pack.
But even these methods did not make it possible to transfer large volumes of cargo to places where good, solid roads did not lead. For the fortified points in Mayaki, Glubokaya Makatykh and Pereletki, the command of the division decided to introduce a rate of ammunition supply. For example, 99 cartridges were relied on a carbine, 34 rounds of various types for MG 3 (the document indicated the quantity for each type), for a submachine gun - 450 rounds, for a 690-mm anti-tank gun - 37 rounds, for 250-mm anti-tank gun - 50 rounds and so on (TsAMO RF, f. 220, op. 500, d. 12477, l. 767-29). The food supply was carried out at the expense of the slaughter of livestock in fortified points and the baking of bread from imported flour. In general, the maximum savings in the work of transport in the period of strong thaw.

The German method of dealing with slabs


The German way of overcoming muddy roads, if you summarize all the methods described above, consisted of two parts.

First: dry the road as quickly as possible. To do this, it is necessary to remove the snow from it, since the melting snow will greatly wet the road. Further (already in the period of snow melting) it is required to deepen the ditches and dig drainage ditches so that the water drains off the roadway as quickly as possible. If these measures are implemented, then the movement will close for about a week or so.

Second: maximum economy of transport operation and limitation of vehicle traffic on soggy roads. In muddy roads, preference is given to light transport, both automobile and horse-drawn. Lightweight transport, which is less damaging to roads, allows transport to be maintained even during the peak of thaw.