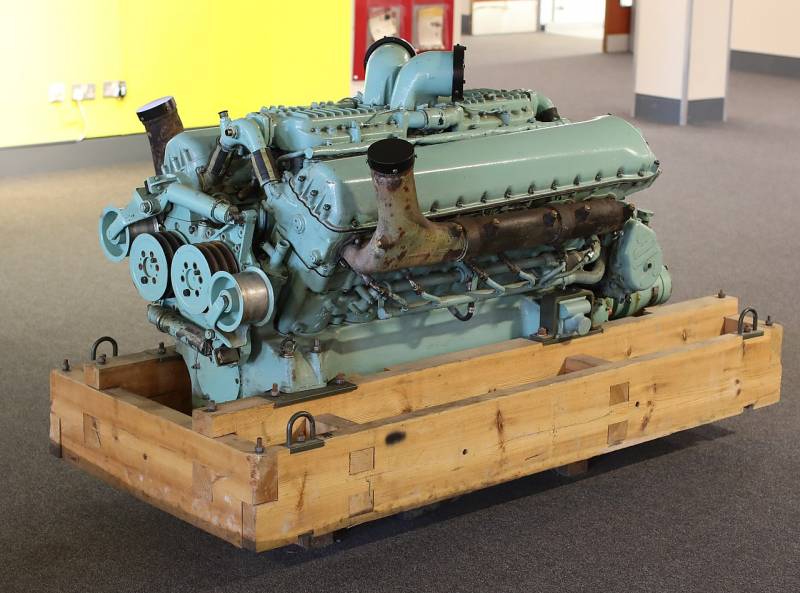 In 1945, the newest A41 Centurion medium tank entered service with the British Army. For all its advantages, this vehicle did not differ in fuel efficiency, which could seriously limit its combat potential. At different times, various attempts were made to get rid of this problem, and one of the first was the special tank trailer Mono Wheel Trailer.

The scale of the problem

In the first modifications, the Centurion tank had internal fuel tanks with a total capacity of 121 gallons (550 liters). In the aft compartment of the armored vehicle there was a Rolls-Royce Meteor V12 petrol engine with a capacity of 650 hp. With its help, the tank could reach speeds of up to 35 km / h on the highway and up to 23-25 ​​km / h on rough terrain. 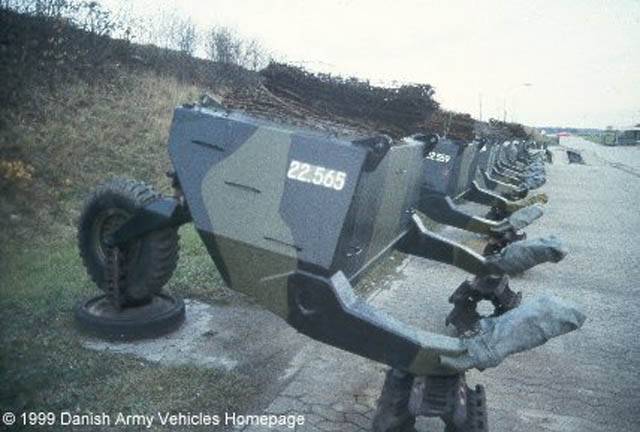 Danish army Mono Wheel Trailer trailers parked. Photo Armyvehicles.dk
Depending on the condition of the engine, transmission and chassis, one refueling of 550 liters allowed no more than 80-100 km to travel on a good road. On rough terrain, the power reserve was even less. Thus, the minimum fuel consumption reached 550 liters per 100 km. For comparison, a heavy Chirchill tank on the highway consumed no more than 300-320 liters per 100 km, although on rough terrain the consumption almost doubled.

High fuel consumption and low cruising range threatened the actual use of the Centurion tanks, and it was decided to take action. The most obvious solutions were replacing the engine with a less "voracious" one or installing additional tanks, but they required a major redesign. An alternative to them was a special trailer with an additional tank.

Back in 1942, British engineers developed the Rotatrailer unified tank trailer. The product of the original design carried several hundred liters of fuel, dozens of shells, machine gun cartridges, water and provisions. It could be used in conjunction with tanks of various types, although the results of actual operation were ambiguous. 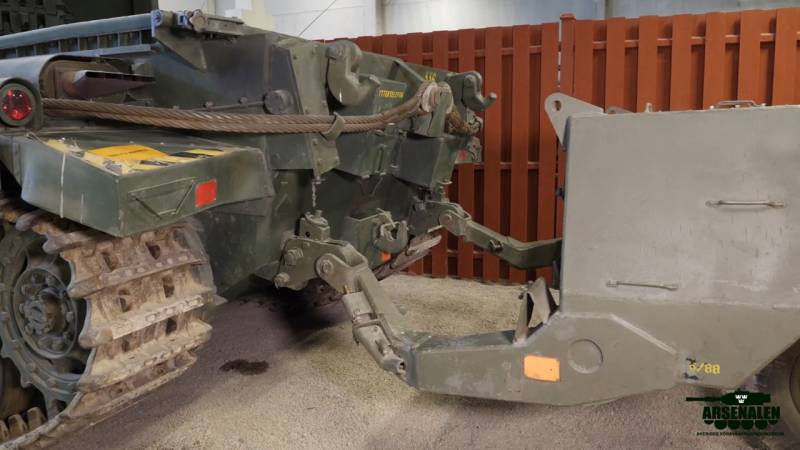 Means for fastening the trailer to the tank. Photo of the Arsenalen Museum
By the end of the forties, it was decided that the optimal answer to the problem of the Centurion's consumption was to create a similar trailer with a large-capacity fuel tank. At the same time, new requirements were imposed on the project, taking into account the operating experience of the Rotatrailer and its shortcomings. As a result, only the original concept remained in the new project, but its implementation changed completely.

The army demanded to make a trailer capable of carrying only fuel - in fact, a tank on wheels. It was proposed to be towed behind the tank on a rigid hitch with the ability to quickly drop. An important innovation was to be the presence of hoses for transferring fuel to the tank while driving.

The finished trailer, called the Mono Wheel Trailer ("One-wheel trailer") had a rather interesting design that met the requirements. It was a compact product that completely fit behind a towing tank and was able to follow it both on the highway and over rough terrain. 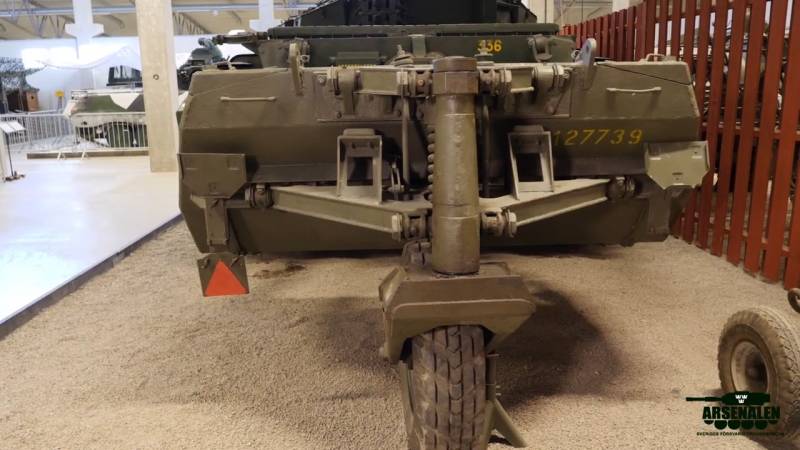 The undercarriage of the product. Arsenalen Photos
The main part of the Mono Wheel Trailer was a complex shaped metal container made of structural steel. The 900 liter tank had a polygonal vertical front wall and sides heaped inside. The rear wall was made tilted back, which simplified the layout of the chassis. The roof and bottom were made horizontal. On top of the tank there were fillers for filling liquid cargo. Lugs were provided on the cover for lifting the trailer with a crane.

Two separate curved drawbars for towing were attached to the sides of the tank from below. With the help of hinge devices, they were connected to standard hooks on the rear of the tank. For quick disconnection in a combat situation, the coupling was equipped with electrically controlled fire bolts from the fighting compartment. A hose was attached to the hitch for transferring fuel to the tank. 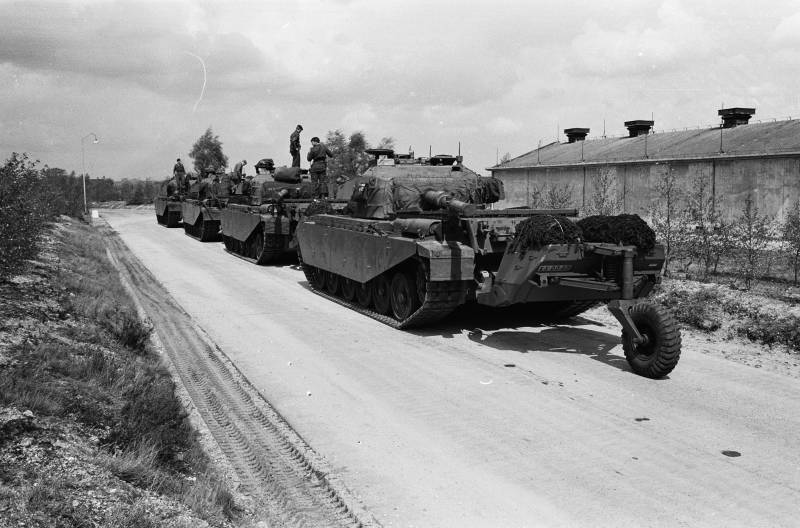 Dutch army tanks on the march, 1963. Photo by National Archives of the Netherlands / nationaalarchief.nl
An original one-wheeled chassis was installed on the rear leaf of the trailer. The suspension used was a double wishbone with a vertical spring, of the type common on cars. The vertical stroke was limited by a bump stop on the lower V-shaped arm. A caster wheel was attached to the levers on an inclined fork. 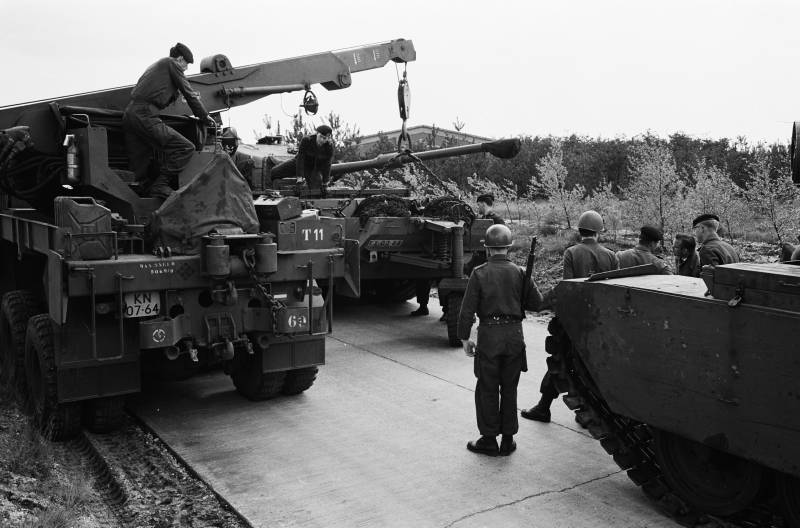 Trailer assembly, 1963. Photo by National Archives of the Netherlands / nationaalarchief.nl
A simple two-axle bogie was supplied with the trailer. If necessary, a one-wheeled trailer could be installed on it and towed by any available vehicle.

The production of Mono Wheel Trailer trailers was established in the late forties, and at the same time the first products entered the combat units of the British army. In connection with the mass production of the Centurion tanks, the army needed large quantities of additional equipment for them. To ensure a full-fledged service and maximum operational capabilities, it was required to get one trailer for each tank, as well as create some stock. In the same period, new types of armored vehicles were created based on the tank, which could also need a trailer with fuel. 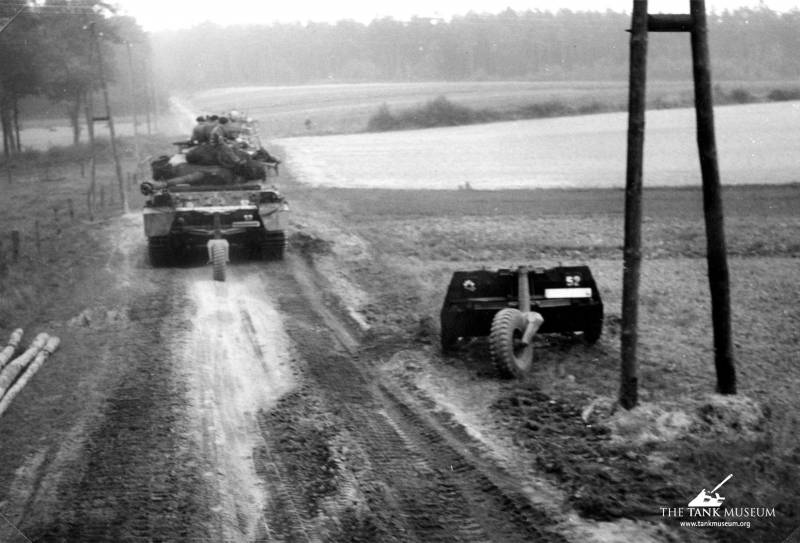 "Centurions" on maneuvers. A discarded trailer is on the sidelines. Photo Tank Museum Bovington
In the course of testing and operation, it was shown that the "One-wheeled trailer" perfectly copes with its main task. A 900 liter fuel tank increased the cruising range to 250-260 km and reduced the dependence of the combat vehicle on fuel trucks. In addition, fuel was constantly supplied to the tanks of the tank, which eliminated the need for stops for refueling.

However, there were also problems. So, a tank with a trailer was more difficult to drive. Unsuccessfully returning it back, you could damage the tank or even run over it, crush it and spill fuel. When driving over rough terrain, the hitch and chassis were subjected to increased loads and often broke. There are known problems with the emergency release system, which could fail, and the tank had to drag the trailer further behind it.

Gasoline from the trailer entered the tanks of the tank with a constant pressure, approximately corresponding to the engine consumption. Due to this, the same fuel level was maintained in the internal tanks of the car, and the entire consumption fell on the supply from the trailer. However, in some situations, the tanks were overfilled and fuel spilled into the engine compartment, causing the risk of fire. 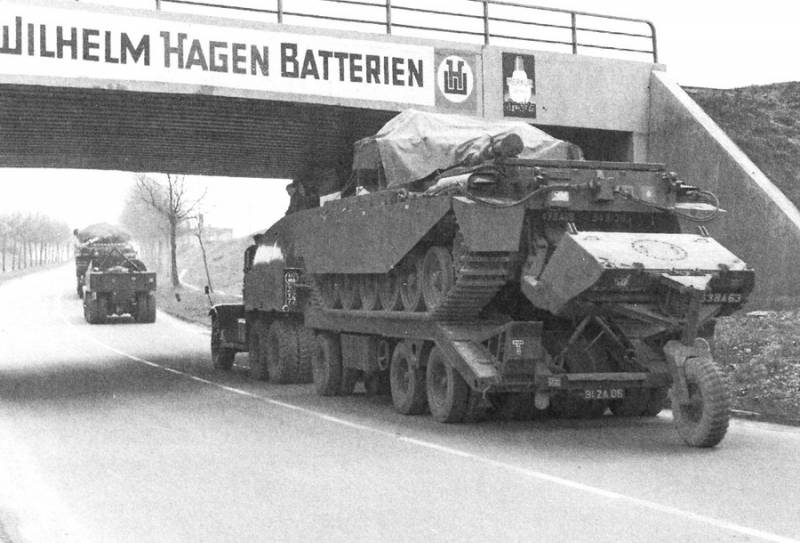 An original way of transporting a tank with a trailer. Photo Militaryimages.net
Overall, the Mono Wheel Trailer had both pros and cons, which earned it a controversial reputation. Some servicemen believed that the disadvantages outweighed the advantages, while others were willing to put up with the inconvenience that simplifies the operation of the tank.

Trailers in the armies

The first serial single-wheeled trailers entered the British Army. According to various data and estimates, several thousand of such products were built, which made it possible to improve the capabilities of the troops. The trailers were used with Centurion tanks of various modifications, up to the very latest. As the modernization progressed, the capacity of the tanks of the tank grew, but the old uneconomical engine remained - the cars still needed an additional trailer.

At the turn of the forties and fifties, Great Britain began shipping "Centurions" abroad. Such tanks were adopted by nearly two dozen countries. Foreign customers understood the problems of the purchased tank, and some contracts provided for the supply of Mono Wheel Trailer products in certain quantities. For example, the Netherlands bought almost 600 tanks and the same number of trailers. In varying quantities, tanks and trailers were delivered to Sweden, Denmark, Canada and other friendly countries. 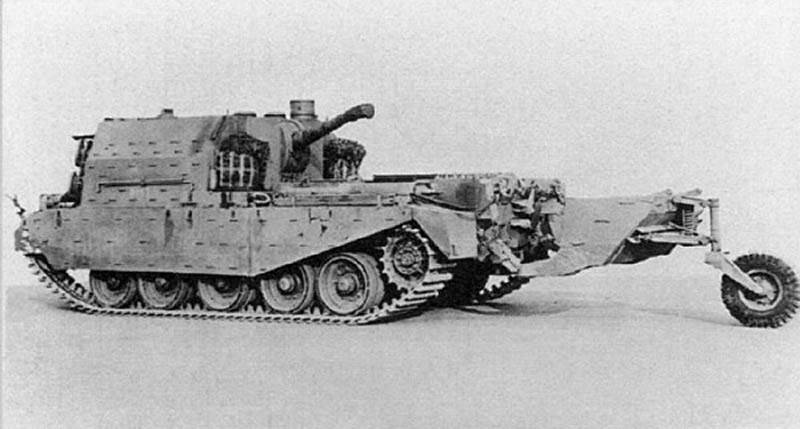 Experienced ACS FV3802 based on the Centurion tank with a Mono Wheel trailer. Photo Strangernn.livejournal.com
All countries with Centurion tanks continued to operate single-wheeled trailers for many years. They began to refuse them only together with the decommissioning of compatible armored vehicles. Most of the trailers were recycled, but some have survived in museums. Often the trailer is shown together with the tank.

Overall, Mono Wheel Trailers have performed well, but not ideal for increasing mobility. With their help, the main tanks of Great Britain and other armies were able to increase the range and, therefore, the overall combat potential, but still it was a limited and insufficiently effective solution.

Based on the experience of operating trailers, it was decided to develop tanks. The first step in this direction was the modernization of the Centurion with the addition of one more internal tank and an increase in the cruising range. And then completely new armored vehicles appeared with acceptable fuel consumption. This made trailers like the Rotatrailer or Mono Wheel unnecessary. Further samples of this kind were not created. The work of the new tanks was provided without any problems with conventional fuel trucks.