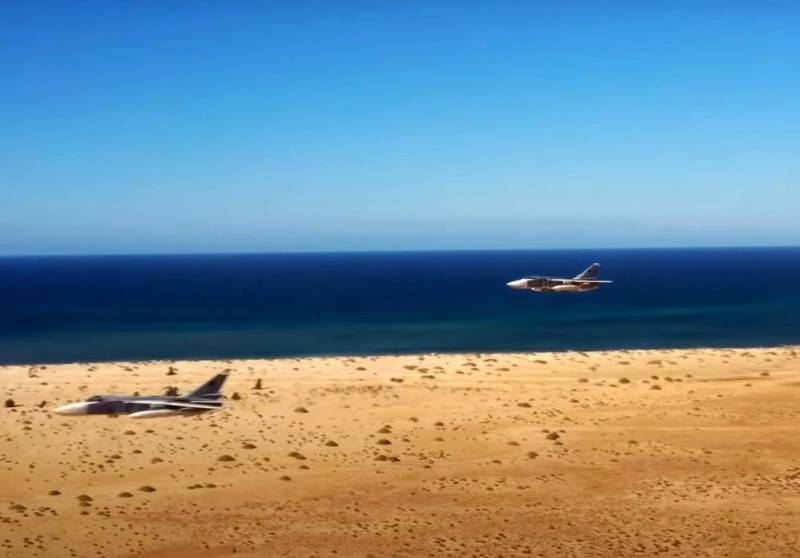 The war in Libya has not been going on for the first year. It is no secret that Russia in this war is more inclined to support the Libyan National Army of Marshal Khalifa Haftar. Moscow is pinning their hopes on Haftar for some stabilization of the military-political situation in the region. Haftar also benefits from the UAE, Egypt and, to a lesser extent, France and Greece. His main opponent Faiz Saraj, in turn, is supported by Turkey.


The American edition of The Drive cites a statement by the African Command of the US Armed Forces (AFRICOM) that the Su-24 aircraft with Libyan insignia are in fact piloted and serviced by "Russian mercenaries from private military companies associated with the Kremlin." Again the ubiquitous "Wagnerites"? .. Searching for traces of the presence of Russian PMCs in Africa and the Middle East, as we know, has become one of the favorite activities of the Western press. Of course, first of all, the attention of the press is riveted on Libya.

So, as evidence of the supply of aircraft by Russia to Libya, the American publication cites the coloring of the Su-24: it is sustained in the gray-white tones of the Russian Aerospace Forces, and not in the camouflage used by the Libyan Air Force since the reign of Muammar Gaddafi. 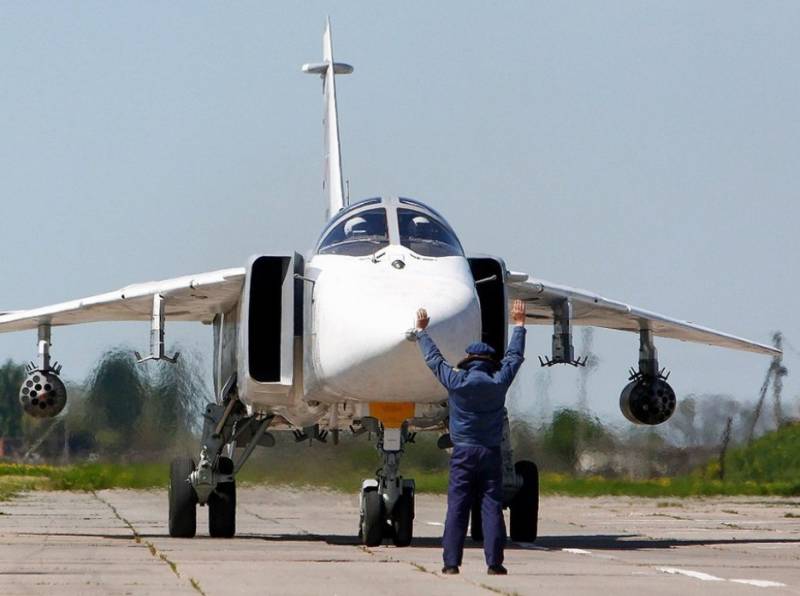 Front-line bomber Su-24 before takeoff. Photo: Ministry of Defense of the Russian Federation
According to AFRICOM, in total, Russia could have delivered at least 14 Su-24 and MiG-29s to Libya, having transferred them to North Africa through the Khmeimim airbase in Syria, which houses the Russian Aerospace Forces aircraft participating in the Syrian conflict on the side of President Bashar al-Assad. According to the US military, the exact number of Russian aircraft in the Libyan National Army is unknown, but at least two MiG-29s were lost in accidents.

As proof of the presence of the Su-24, the Americans cite the very propaganda video of the Libyan National Army. True, the planes on it already have the identification marks used by the LNA. Thre Drive also publishes satellite imagery from Planet Labs. They can be seen 2 Su-24 at the Al-Jufra airbase in central Libya. In turn, on June 18, a similar picture was published by the African Command of the US Armed Forces. In early June 2020, 4 Su-24 aircraft were filmed at the Al-Khadim airbase in eastern Libya. The very appearance of the Su-24 in Libya attracts the interest of the American media. 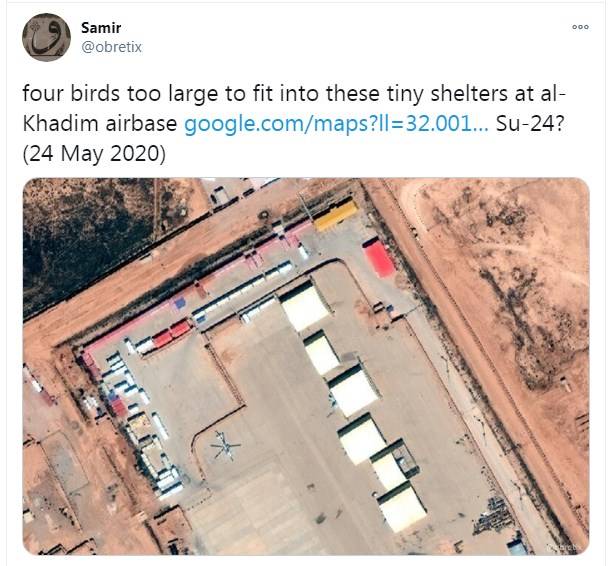 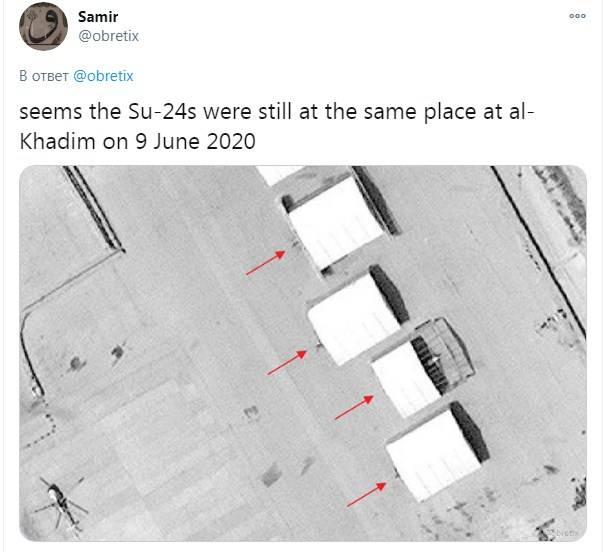 According to The Drive, it was initially not very clear when exactly Russian-made aircraft arrived in Libya. However, then satellite images from the Khmeimim airbase in Syria appeared on the Web, showing 6 MiG-29s and 5 Su-24s just a few days before they were fixed in Libya. In the May 25 photo, the planes at the Khmeimim base were already missing, which allowed the US military to claim their transfer to North Africa. 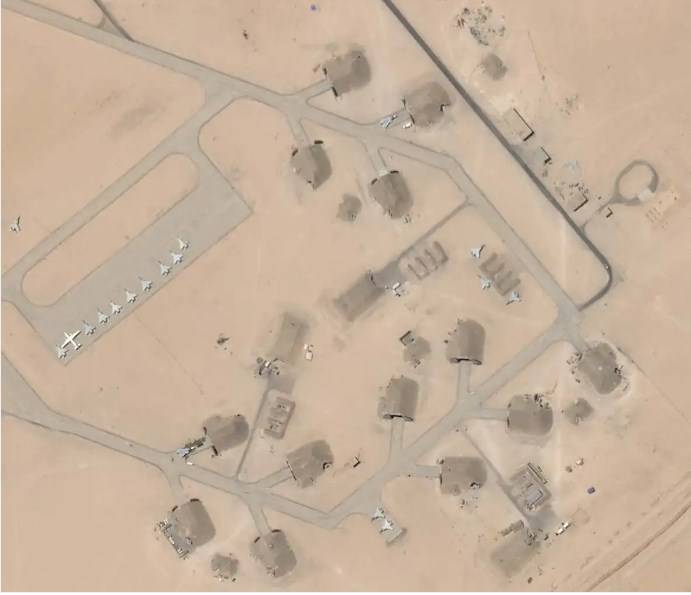 Russian-made aircraft based on Al-Jufra. Source: The Drive
The planes arrived in Libya to aid the army of Khalifa Haftar, supported by the UAE and Egypt. However, the troops loyal to Faiz Saraj managed to repel Haftar's offensive against Tripoli, actively using Turkish military assistance, including the Bayraktar TB2 unmanned aerial vehicles.

Nevertheless, the failure of the offensive on Tripoli, according to the American publication, does not mean that in the future, Khalifa Haftar or his entourage will not want to take revenge. The presence of Russian-made Su-24 aircraft acts as one of the factors giving Haftar confidence in his abilities. At least the more worthy weapons will be at the disposal of the Libyan National Army, the more likely it will eventually go over to a new offensive against the positions of the troops loyal to Faiz Saraj.

It should be noted that, in general, the interest of the American military in the supply of Russian weapons is not very clear. The Americans themselves are arming those they see fit around the world. Not lagging behind the Americans and their NATO allies, for example, the same Turkey, which supplies its drones to the PNS troops in Libya, and militants in Syria, and the Azerbaijani army.

Video with Su-24 aircraft and high-ranking officers of the Libyan National Army watching their flight: