November 26 2020
39
War is known to be the best engine of progress. Tank The industry of the Soviet Union made a dizzying qualitative breakthrough in just a few war years. The true crown of this was the tanks of the IS series. 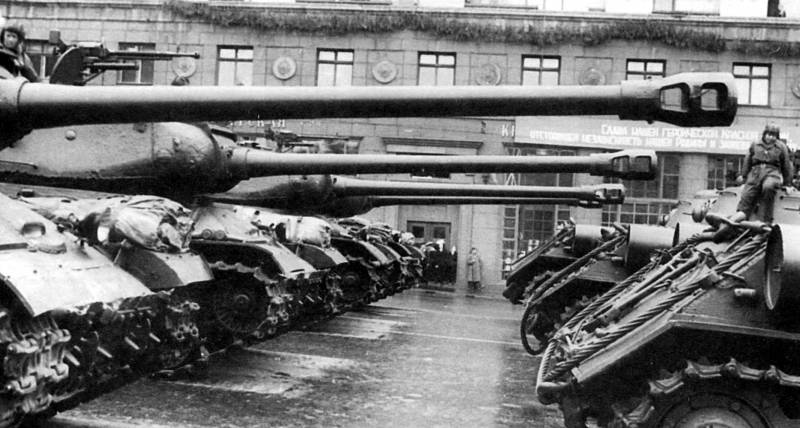 IS-2 are heading to Red Square. Source: waralbum.ru

In the previous part stories it was about cast high-hardness 70L armor used for the turrets of the IS tanks. The armor developers from TsNII-48 were far from the first experience in creating protection for heavy tanks.

Before the Kursk Bulge, which became a catalyst for the development of domestic heavy tank building, the main object of modernization was the KV tank. Initially, all work was aimed at reducing the proportion of scarce alloying additives in the composition of the armor. Even the name in TsNII-48 came up with an appropriate one - economically alloyed steel. The original armor of the FD-7954 brand, with which the KV tank entered the Great Patriotic War, according to technical requirements, contained up to 0,45% molybdenum, 2,7% nickel and chromium.

By the end of 1941, a group of researchers led by Andrei Sergeevich Zavyalov at the Armored Institute created a recipe for steel FD-6633 or 49C, in which molybdenum required no more than 0,3%, chromium - up to 2,3%, and nickel - up to 1,5 ,five%. Considering that about 1941 thousand copies of the KV series tanks from the second half of 1943 to 4 were collected, one can imagine the amount of real savings in alloying metals.

KV-1 at the British training ground in Bovington. Source: waralbum.ru

The secret of success

The secret of the metallurgists' success lies in the study of the parameters of the formation of fibrous fracture of armor - the main parameter of projectile resistance. It turned out that it is possible to do without a significant proportion of alloying elements by simply changing the cooling rate of the armor during quenching. But this is simple in words - how many preliminary experiments and melts metallurgists had to do, only the now classified archives can tell.

In 1941, the first prototypes of 49C steel were obtained at the Magnitogorsk Metallurgical Combine, which were not inferior to the traditional "pre-war" armor. In particular, the shelling with a 76-mm cannon showed full compliance with the tactical requirements for the tank. And since 1942, only armor with the name 49C was used for the KV series. It is worth remembering that the consumption of chromium, molybdenum and nickel has significantly decreased.

The search for new formulations of armor for heavy equipment did not end there. In 1942 steel GD-63-3 was “welded”, completely devoid of scarce chromium and nickel. To some extent, nickel was replaced by manganese - its share increased more than three times (to 1,43%). Prototypes of the new armor were fired upon. And they turned out to be quite suitable for mass use in the design of the KV. But the Klim Voroshilov tanks with medium hardness armor were retiring. And the place of heavy vehicles was taken by “Joseph Stalin” vehicles with high hardness armor.

If the 70L armor for the IS-2 turret could be cast, then this trick did not work with the hull parts of the tank. Here, engineers faced two problems at once - the creation of high-hardness armor of great thickness and the need to weld it into a finished hull.

Everyone who is interested is probably already aware of the problems caused by welding of the T-34 armor - the high probability of cracking in the area of ​​welds. The IS-2 was no exception. And its body was originally supposed to be cooked from finally heat-treated parts.

Realizing what difficulties and dangers such a technological solution would bring in military operation, TsNII-48 specialists changed the tank production cycle. As a result, in 1943 at the Ural Heavy Engineering Plant and the Chelyabinsk Plant No. 200 of the IS-2 hull, it was decided to cook from armor plates that had passed after rolling only a high vacation. That is, in fact, the hull of a heavy tank was assembled from "raw" steel. This significantly reduced welding defects on the 51C high-hardness rolled armor.

The final heat treatment by heating before quenching was carried out already on the welded body of the tank, having previously strengthened it with internal struts. The body was kept in the oven for three hours. And then, on special devices, they were transferred to a water quenching tank and kept in it for 15 minutes. Moreover, the water temperature in the quench tank rose from 30 to 55 ° C. The surface temperature of the case after being removed from the water was 100–150 ° С. And that's not all.

After quenching, the body was immediately subjected to low tempering in a circulating furnace at a temperature of 280–320 ° С with holding after reaching this temperature for 10–12 hours. The low tempering of cast towers from 70L armor was carried out in a similar way. Interestingly, crack control in the experimental IS-2 hulls lasted for four months, when the first serial tanks left the factory gates. 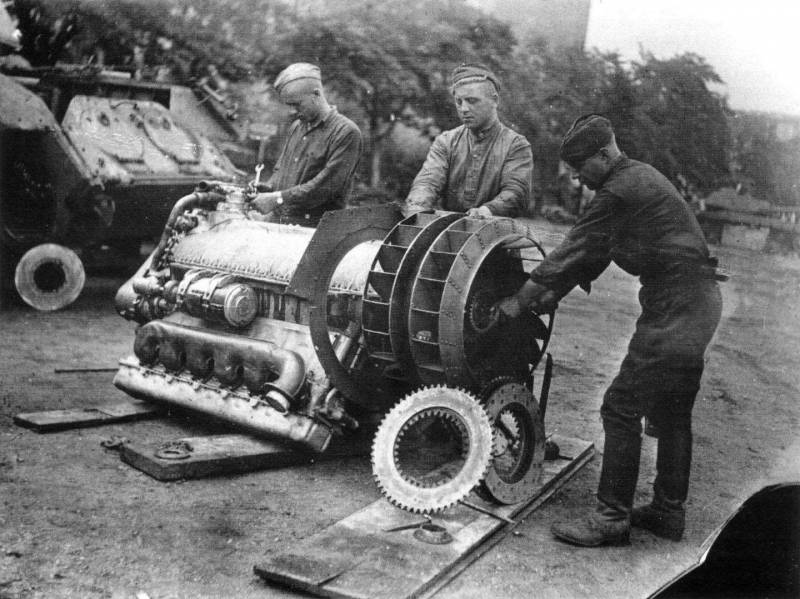 Repair of the V-2 engine of the IS-2 tank in the field. Source: waralbum.ru

What was the 51C rolled armor that became the main one for the IS-2, ISU-122 and ISU-152? It is a deep hardening steel for large armor thicknesses with the following chemical composition (%):

In comparison with the cast armor 70L, the proportion of molybdenum and nickel in rolled steel 51C was higher, which guaranteed an increase in hardenability up to 200 mm. When the hulls of heavy tanks were fired at with 88-mm shells, it turned out that the armor of high hardness was much superior in durability to its medium-hard predecessors. The issue of placing rolled armor 51C was resolved immediately.

An important contribution to the success of the development of armor production of tanks of the IS series was made by automatic welding of steel under a layer of flux. Since it was impossible to transfer the entire process of manufacturing a tank armored hull to such welding at the beginning of 1944, the engineers focused on automating the most extended and mechanically loaded seams.

At the Chelyabinsk plant No. 200, in the process of assembling the hull of the heavy tank IS-2, only 25% of all welds could be automated. By the middle of 1944, Tankograd was able to automate 18% of all possible 25% of welds. The total length of the welded seams along the hull of the IS-2 heavy tank was 410 running meters, of which 80 running meters were carried out by the automated welding method.

This result led to significant savings in scarce resources and electricity. It was possible to free up to 50 skilled manual welders (their labor costs amounted to 15 man-hours) and save 400 kilowatt-hours of electricity. Decreased consumption of electrodes (about 48 kg, austenitic - 000 kg), oxygen (by 20 cubic meters).

The time spent on welding has also been significantly reduced. For example, welding the bottom and the turret box to the sides with a sixteen-meter seam took 9,5 man-hours in manual mode, and only 2. A seam similar in length connecting the bottom to the sides of the tank hull in automatic mode required 3 man-hours ( in manual immediately 11,4). At the same time, highly qualified welders could be replaced by low-skilled workers in automatic welding. 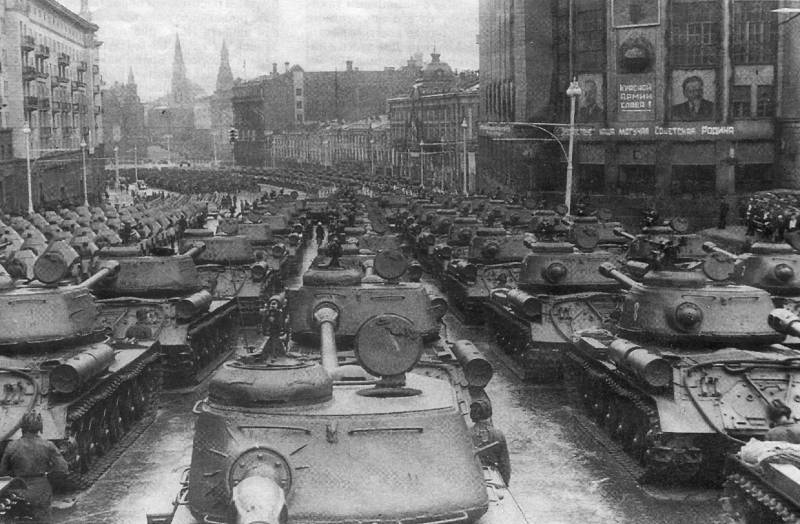 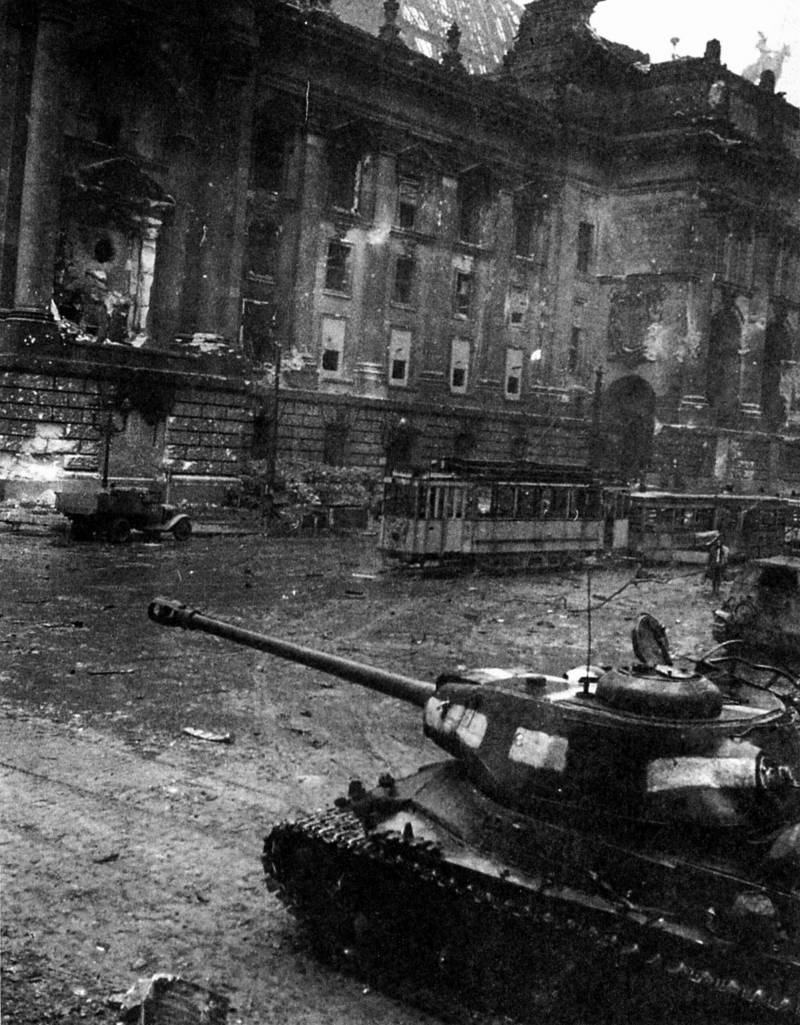 IS-2 before the Victory Parade and near the Reichstag. Source: waralbum.ru

Researcher of the Soviet tank industry, candidate of historical sciences Zapariy Vasily Vladimirovich from the Institute of History and Archeology of the Ural Branch of the Russian Academy of Sciences in one of his works describes in great detail the automatic welding units used in the Urals for armored hull production.

The most widespread was an assault rifle of the "ACC" type with a Bushtedt head. There were eight such installations at Uralmash. The wire feed speed in this machine depended on the voltage in the arc. It required 5 units, including 3 kinematic electric motors and 1 motor-generator.

In order to master the production of armored hulls for the new Chelyabinsk heavy tank IS-3, the engineers of the plant in 1944 designed the apparatus "SG-2000". This machine was designed to work with low-carbon welding wires of increased diameter (6–8 mm) and found its application during the manufacture of the IS-3 tower. The installation had a dispenser for introducing a special composition (various ferroalloys) into the weld section for the purpose of deoxidizing (reducing) the metal in it. In total, on the principle of self-regulation of the welding arc at UZTM, by 1945, 9 automatic welding installations of three types were created: "SA-1000", "SG-2000", "SAG" ("Automatic welding head").

The result of the whole story with the armor of heavy IS tanks was the surprisingly prompt development of a steel recipe that surpassed German armor in its tactical properties. TsNII-48 received a hardenable 120-mm steel, the thickness of which, if necessary, could be increased to 200 mm.

This became the main foundation for the development of the post-war family of heavy Soviet tanks.

Ctrl Enter
Noticed oshЫbku Highlight text and press. Ctrl + Enter
We are
Is the "old" well forgotten to become the "new"? Part-2. At the call of honor and dutyThe fire control devices of the Soviet and German tanks of the Second World War. Myths and Reality
Military Reviewin Yandex News
Military Reviewin Google News
39 comments
Information
Dear reader, to leave comments on the publication, you must sign in.