Copy & Buy: In Search of Weapons for the Army of the South 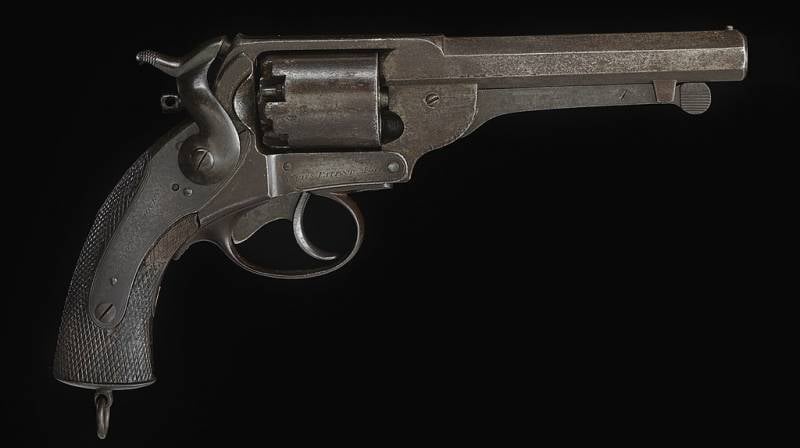 Carr's five-shot revolver manufactured by London armory company ". Caliber .44. Pay attention to the characteristic shape of the lever for tight bullet driving under the barrel. (National Museum of American History)

When enemies attacked you, or you yourself began to fight with your enemies, you have no time to think about the rules of decency. You take on the first weapon that comes to your hand. And it doesn't matter if it was copied from the enemy's weapons or bought somewhere overseas ...

Oh, I would like to be in the country of cotton,
Where the old days are not forgotten
Turn around! Turn around! Turn around! Dixieland.
In the Dixie country where I was born,
early frosty morning ...
("Land of Dixie" is the unofficial anthem of the Confederation).
Weapons and firms. In the previous article "Copied Weapons" we talked about a number of companies that copied the popular Colt revolvers in the USA for the needs of the Confederate army. And I must say that this is only part of what happened. Just to tell about all the copied samples, you need to write a whole book, and reading, in principle, about the same will not be very interesting. After all, there were practically no original samples. The most common model for copiers was either the Navy 1851 Colt (most often) or the 1849 Dragoon Colt. However, the money received from the sale of cotton made it possible to buy weapons. And the southerners bought it. Including revolvers. And today we will tell you about them ...

Well, and probably should start with the fact that in England at that time there was a "London Arms Company". It was founded back in 1856, while among its shareholders were such famous people as Robert Adams (who designed the famous revolver) and gunsmith James Kerr (pronounced Carr), who was Adams' cousin.

Eventually, in 1859, the company began production of a new type of revolver known as the Carr Patented Revolver. However, since the British government showed no interest in it, its sales were modest.

And then Captain Caleb Hughes, in charge of purchasing weapons for the Confederate government, arrived in London and offered Kerr a contract for the supply of all the rifles and revolvers he could produce. And it was so profitable that the company went to cancel the unfinished contract with the British government, after which Hughes immediately signed a contract with the London Arms Company. So the Confederation had a reliable partner in England, ready to supply it with weapons in almost unlimited quantities. 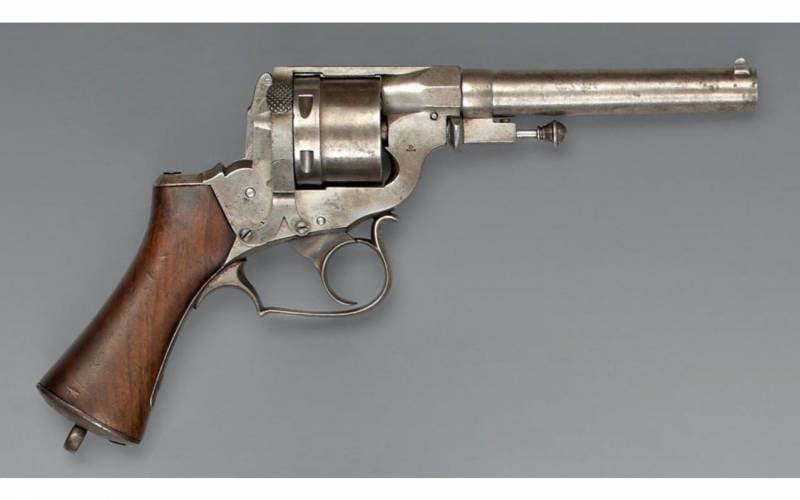 Sold to the southerners and French revolver L. Perrin from Paris M.1859 (2nd type) 11-mm caliber. The revolver mechanism was based on L. Perrin's patents and differed in some complexity, but on the other hand it allowed self-cocking to fire. It is also convenient in that it fired central combat cartridges. These revolvers were usually privately purchased by officers in the French army and also sold to civilians. It is not surprising, therefore, that some ended up in the United States during the Civil War. The revolver has a very beautiful solid dark walnut grip. The frame is open, like the Colt revolvers. The round barrel was 5,75 inches long. It is curious that the hammer does not have a spoke for manual cocking. It was possible to shoot from it only by self-cocking! ("Thierry de Magre")
According to surviving records, about 80 rifles and 000 revolvers were sold to Hughes. More than 9 rifles and about 000 revolvers were produced and shipped, but the exact number of weapons that got to the southerners on penetration ships that managed to break through the blockade of the Union is unknown. In any case, the London Armory has supplied more revolvers to the Confederate Army than any other manufacturer! Captain James D. Bulloch of the Confederate Navy also signed a contract with the company to supply revolvers. However, the exact terms of this contract are unknown.

The weapons supplied from England were considered to be the best supplied to the Confederation. This was confirmed by both Hughes and Bulloch, as well as a letter from the Tennessee Army in April 1863 requesting the delivery of 200 Carr revolvers and stating that they were preferable to the Spyler and Burr revolvers. The war was already over, and the London Arms Company lasted another year, that is how closely its fate intertwined with the fate of the Confederation. 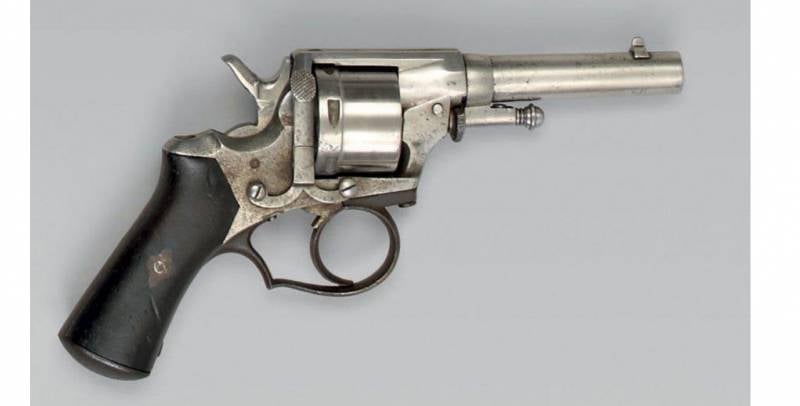 Revolver Perin, model 1859 of the 2nd type, chambered for the central battle, double action, caliber 9 mm. Barrel length 92 mm, total length 200 mm. Period around 1860. It was expensive - $ 20, which was almost 2 times more than the cost of Colt revolvers. Perhaps precisely because of this, and the lack of habit of self-cocking revolvers after purchasing 1000 units, the southerners did not buy them anymore ("Thierry de Magre")
However, at first the company traded with the northerners, who in November 1861 sold 1600 revolvers for the Union army at $ 18 apiece. But this was the first and last purchase by the federal government. But this company delivered more revolvers to the Confederation than was produced by all southern manufacturers during the entire war!

Carr's five-shot revolver was very different from the revolvers produced in the United States. Firstly, all early revolvers were double-acting, that is, they could shoot self-cocking. Secondly, they were very simple in design, although the Kolt revolvers were also simple. The drum axle was removed from the rear through the frame, which was very convenient. Almost all of his revolvers were .44 or .54 caliber; very few .36 revolvers were produced. 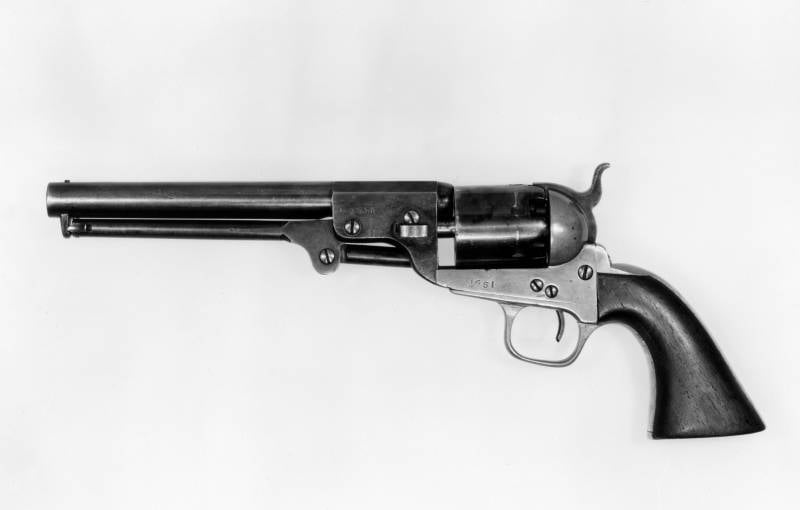 Revolver "Griswold and Gunnison". Confederate cavalrymen loved the Colt revolvers of 1851 and 1860, so they were most often copied. For example, the Griswold and Gunnison revolver, which was manufactured in Griswoldsville, Georgia. From 1862 to 1864, 3606 of these revolvers were produced. They were a close copy of the Colt Model 1851 Navy: the main difference was that the Confederates had to replace the steel frame with a brass one. The Griswold & Gunnison was 13 inches long, weighed 2 pounds 6 ounces, and fired a .36 ball bullet. But the company "Spiller and Burr" produced very similar revolvers in Macon, Tennessee, and supplied to the Tennessee Army. Moreover, a total of 1250 pieces were made, although under the contract they were supposed to make 15000 of them! (Metropolitan Museum of Art, New York)
In addition, the famous Belgian gunsmith Eugene Lefauche sold his revolvers to both northerners and southerners. Shortly before the outbreak of the Civil War, he received US patent No. 31809, which extended to his revolver, as well as his rifle. Later, from September 1861 to June 1862, the Union army purchased a total of 11 model 833 revolvers from him. 1854 of these were supplied directly by Lefauche, 10 were purchased through Alexis Godillo, a gunsmith in Paris and Liege, and the remaining 000 were purchased by six other American traders. The Union Army also purchased 1500 333mm hairpin cartridges for this weapon. But some of them were still able to be produced at one of the US factories. 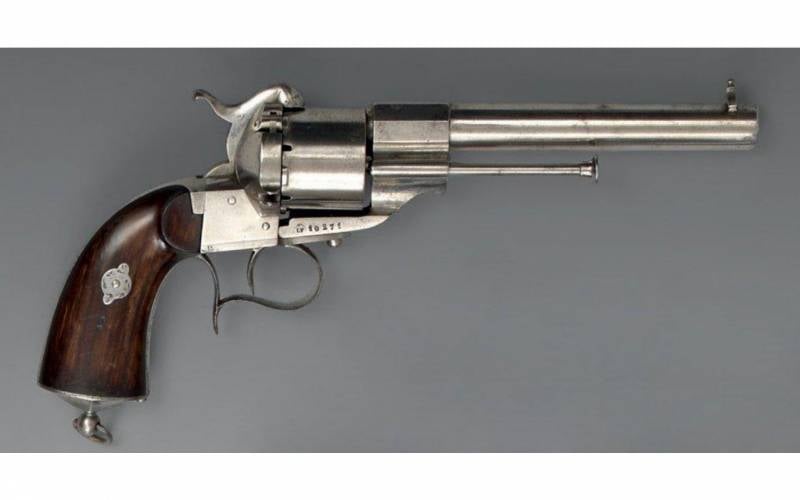 Revolver Lefoshe model of 1854 of the 2nd type (usually called the civilian model of 1858), hairpin cartridge, six-shot drum, 12-mm caliber. Barrel length 157 mm, total length 290 mm ("Thierry de Magre")
In fact, it is known that the Confederation imported a total of 250.000 samples of various firearms over the years of the war. But how many Lefoshe revolvers were among them is not known exactly. It is believed that from 2000 to 5000 calibers 7, 8 and 12 mm.

The curious single-action Beals pocket revolver, created in 1854 by Fordyce Beals (the ingenious gunsmith who in three years would become the creator of the excellent Remington shock revolvers), and which Eli Whitney produced and sold from 1854 to late 1860s The first model (about 50 produced) had a brass frame and .31 caliber. The second model had an iron frame and was produced in an amount of about 2300 pieces. The third had a seven-shooter drum. 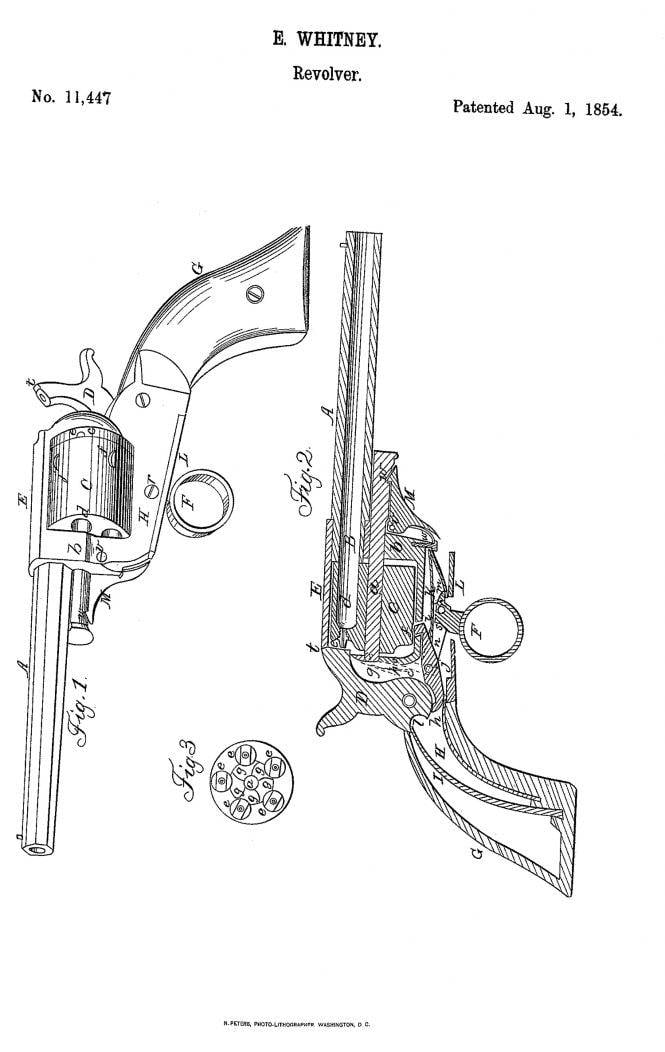 Revolver scheme from E. Whitney patent
The main feature of this revolver was that its drum rotated from the movement of the trigger with the ring forward, while the trigger mechanism acted when moving backward, which was done in order, again, to bypass one of Samuel Colt's patents. The revolver proved to be difficult to use, the .28 cartridge was too weak, but nevertheless it was produced and sold during the American Civil War. 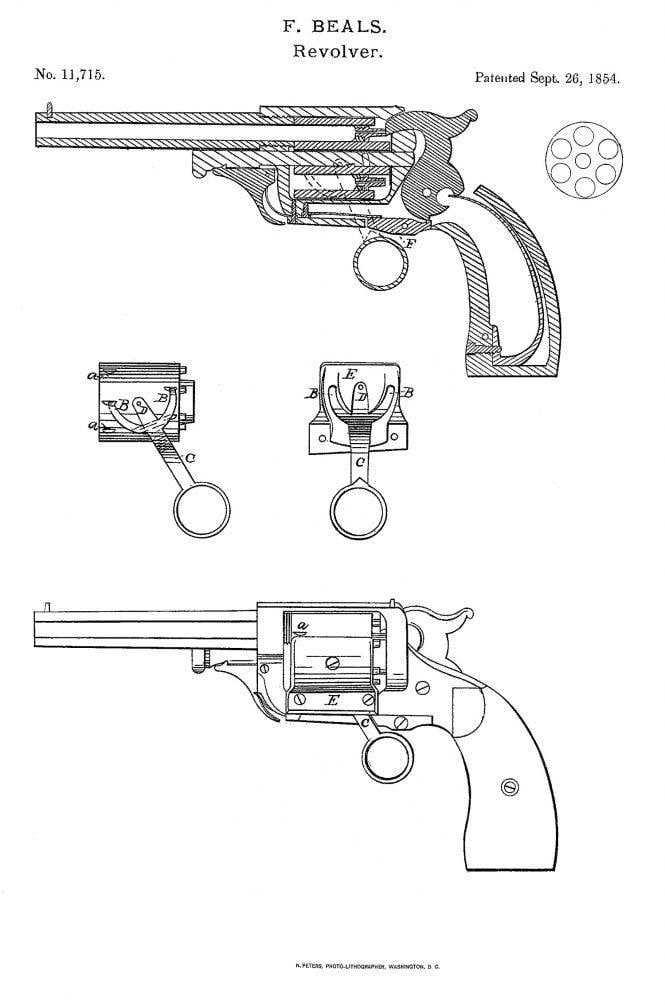 Another diagram from the F. Beals patent, explaining the action of his mechanics
The author and the site administration would like to express their deep gratitude to Madame Palomé Larcheveque, auctioneer of the auction house "Thierry de Magre", for permission to use photographs of his revolvers.