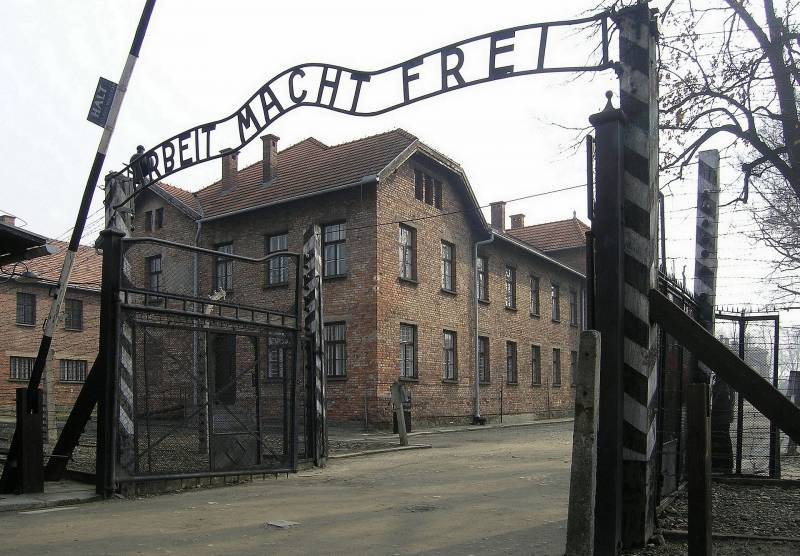 Moral values ​​of the Hitler soldier

In post-war Germany, former party functionaries of the Third Reich and high-ranking SS men were quite in demand. They occupied prominent places both in the political elite and in the military department.

For example, in the GDR, SS Unterscharführer Ernst Grossmann, who worked in the Sachsenhausen camp during the war, was elected a member of the central committee of the party in the ruling socialist unified party of Germany. Horst Dresler-Anders, who held a high position in the department of Goebbels, was listed in the party department of agitation and propaganda. And the SS Sturmführer Werner Gast worked in the leadership of the Union of Journalists of the GDR.

In Germany, despite the proclaimed denazification policy, a successful career awaited the lawyer Hans Globke, who was directly involved in the development of the notorious Nuremberg racial "laws". The former commander of the Nachtigall battalion, Theodor Oberländer, worked in the Federal Republic for ten years as Secretary of State in the Federal Chancellor's Office. The war criminal even managed to visit the ministerial chair of the department for the expelled affairs and retired in 1960 only after the court of the GDR sentenced him to death in absentia. He died peacefully at the age of 93 in the late 90s.

Further more. From 1959 to 1969, Heinrich Lübcke was the Federal President of the Federal Republic of Germany, who during the Third Reich was engaged in the planning and construction of concentration camps. If such seasoned Nazis sat at the top of the German political system, then what to say about middle-ranking officials, businessmen and employees. The share of former activists of the Third Reich in this stratum was off scale.

In the GDR, the Brown Book was published in 1965, which tells about 1800 high-ranking Nazis successfully working in the Federal Republic of Germany in the state apparatus, economy, justice, diplomatic service, education, science and, of course, in the armed forces. In the new German army - the Bundeswehr - at the Chancellor of Germany Konrad Adenauer, almost all the generals consisted of Wehrmacht natives. Here the situation was not so delicate, after all, the Wehrmacht (unlike the SS) was not recognized as a criminal organization, but this in no way justified the Hitlerite commanders. By the way, the general staff of the army of fascist Germany was nevertheless classified by the international tribunal as a criminal organization.

At one of the conferences, Adenauer was asked whether the formation of the new army would really be entrusted to the former Nazis. He said slightly lightly:

"I'm afraid that with eighteen-year-old generals, they won't let us into NATO."

And in 1952, the chancellor in the Bundestag said the following:

“In the face of this high gathering, I would like to declare on behalf of the federal government that we recognize all weapons of our people, who fought worthily under the sign of high soldier traditions on land, on water and in the air. We are convinced that the good reputation and great achievements of the German soldier live on in our people and will continue in the future, despite all the insults of the past. Our common task should be - and I am sure that we will solve it - to combine the moral values ​​of the German soldier with democracy. "

All of the above clearly illustrates the enviable position of the "heroes" of the war both in the FRG and in the pro-communist eastern neighbor. The society openly sympathized with the Nazis, to a certain extent yearned for the past and did not even think about any retribution for war criminals. In the best case, the Germans preferred to simply forget about the years of the NSDAP rule, or declare themselves innocent victims of the regime, shifting their responsibility onto Hitler and his henchmen. This was partly the result of ignorance of the consequences of the Fuhrer's misanthropic policies. For example, Auschwitz in Germany in the 50s and 60s was considered an ordinary labor camp. 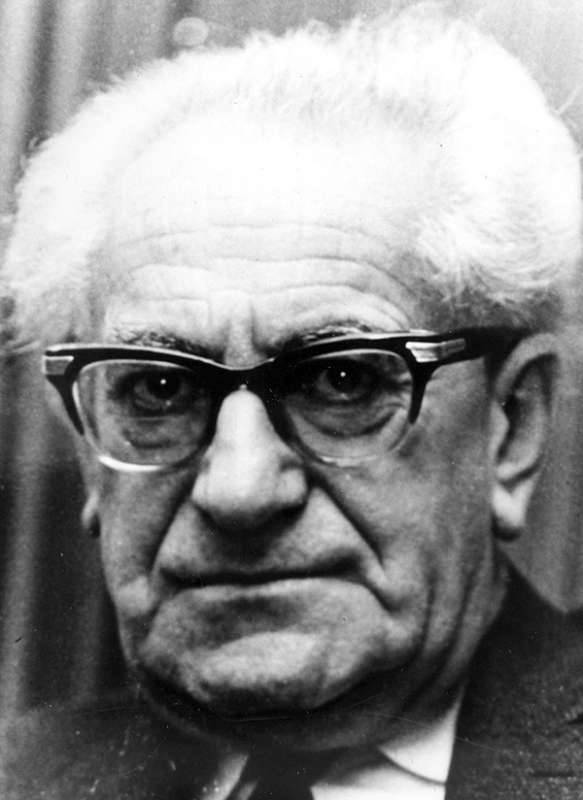 Prosecutor Franz Bauer. Without this lawyer, the trial of the war criminals from Auschwitz would not have taken place. Now in Germany, Bauer is considered the main initiator of the confession of the sins of the Third Reich and the repentance of the Germans.
The Cold War gained momentum and the persecution of the Nazis gradually eased. So, if in 1950 there were investigations in 2495 cases, then in 1957 - only in 1835 episodes. The country has launched an extensive amnesty campaign for previously convicted Nazis. For this category of citizens, restrictions on admission to public service were removed.

The apotheosis of the unfolding events was the arrest in November 1961 in Munich of the Yugoslav patriot Lazo Vracaric, who was accused (attention!) Of partisan struggle against the Wehrmacht during World War II. And only the indignation of the countries of the socialist camp saved Vracharić from prison. It is not known where it is история started the post-war Germans, if the prosecutor Fritz Bauer had not appeared on the scene.

The Germans blame the Nazis

Justice has already been served. And it happened in 1946 in Nuremberg with the announcement of the sentence for 24 main Nazis. The trial of the Nazis took place. It was carried out by allies. And we must live on. The Germans had similar arguments when it came to the persecution of the surviving Nazis.

The first to break the German ideology of the 50s and 60s was the Attorney General of the Land of Hesse, Fritz Bauer, a Jew by nationality. The lawyer had personal scores with the Nazi death machine - he spent several months in a concentration camp and miraculously escaped persecution in Sweden. Bauer so distrusted the post-war German justice that he handed over Adolf Eichmann not to the authorities of his own country, but to the Mossad.

His distrust was justified - the intelligence of the Federal Republic of Germany knew about the Argentine refuge of the Nazi, but did not take any steps to capture. Apparently, there were sympathizers in the secret department of the previous regime. And it is quite likely that yesterday's colleagues of one of the organizers of the Holocaust. As a result, the Israelis kidnapped Eichmann and publicly executed him. Naturally, in Germany he would be sentenced to life in prison at best. And ten to fifteen years later, they were peacefully released into retirement.

Fritz Bauer's mood can be briefly described in the words from his interview with a Danish newspaper:

"The new Hitler in Germany would not have been rejected."
Since that time, the title of "Nazi hunter" has been assigned to the prosecutor. 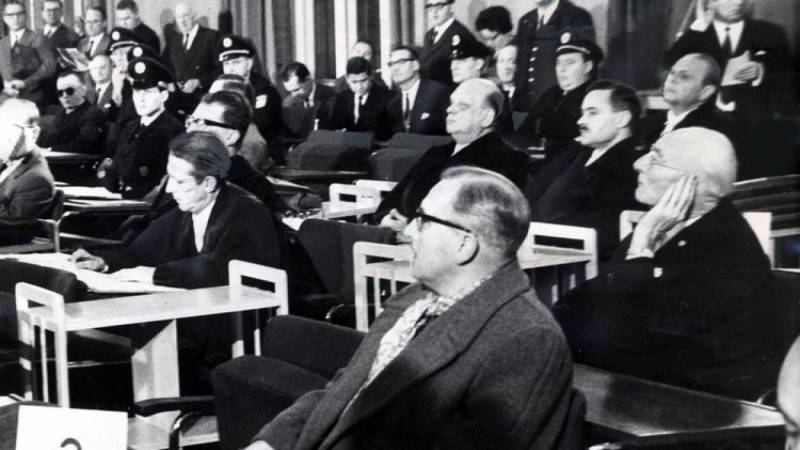 Defendants during the Auschwitz trial. Source: welt.de
The formal beginning of the Auschwitz trial was the appeal of Adolf Regner, a former prisoner of Auschwitz, to the Stuttgart prosecutor's office with a request to detain Wilhelm Boger. This SS man was the head of the camp Gestapo and was particularly cruel to prisoners. Regner indicated where Boger lived. And in October 1958 he was arrested.

The words of the witness were confirmed by another "hunter for the Nazis", a former prisoner of the Hitler regime, Hermann Langbein. Thus began the slow process of investigating Boger's atrocities. But he did not promise to end in anything good - the public opinion of the Germans had already been poisoned. And the SS man was openly sympathetic. Moreover, the prosecutors of the prosecution could well be threatened with physical harm. 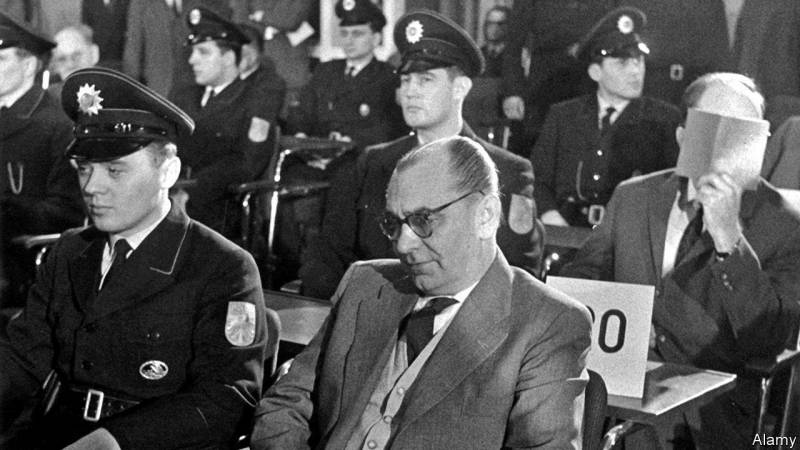 In the foreground is Joseph Kler, the orderly of Auschwitz. Responsible for tens of thousands of deaths in the camp - it was he who poured the Zyklon B capsules into the gas chambers. Source: DPA / Corbis / Scanpix
Here (just in time) Fritz Bauer gets the documents from Auschwitz, which mention the names of some prisoners. And, more importantly, there are 37 camp employees in the ranks of the SS. The search for criminals from this list begins throughout the country, as well as the collection of testimonies from former concentration camp prisoners.

Bauer organized regular newspaper, television and radio advertisements for witnesses. As a result, by February 1959, all materials on the Auschwitz case were combined into one main direction and transferred to Frankfurt am Main. Interestingly, Bauer himself refused to take a direct part in the process, delegating this to young lawyers Kegler, Wiese and Vogel. He retained the role of the gray cardinal, secretly managing the entire machine of retaliation.

On the one hand, he feared accusations of bias - after all, a Jew, and even a victim of the Nazis. On the other hand, fear for one's own life cannot be ruled out. In the late 50s, it was already dangerous in the FRG to threaten yesterday's Nazis with criminal prosecution.

A little help. On December 24, 1959, a synagogue and a monument to the victims of National Socialism were desecrated in Cologne. From 1959 to February 1960, German law enforcement agencies registered 833 such acts of vandalism. In Frankfurt itself at the Institute for Social Research, experts spoke openly about the "secondary wave of anti-Semitism" in Germany. Therefore, the fears of the Jewish prosecutor who initiated the process against the Nazis were well founded.

The top photo shows Robert Mulka, the highest-ranking SS man on Bauer's list. At the bottom - Auschwitz pharmacist Victor Kapesius. Source: en.wikipedia.org
The history of the Auschwitz Process goes back more than four years, during which about 1500 witnesses were interviewed and 599 Nazis who served in the world's most famous concentration camp were identified.

Investigators collected 51 volumes of evidence and attracted only 22 SS men to the dock. The lists included the adjutant of the commandant of Auschwitz, Robert Mulka, the SS report-fuehrer Oswald Kaduk, the chief pharmacist of the concentration camp, Victor Capesius, and many more sadists of lower rank. These were quite respectable and respected burghers, whose Nazi past outwardly did not say anything. Although Capesius alone killed several thousand people with phenol and Cyclone B.

During the trial, none of the captured SS men believed in the conviction at the end of the trial. Most of the defendants were not even arrested during the trial and continued to live full lives. And Mulke, as a prominent businessman, even managed to visit Hamburg between meetings in VIP train cars.

Ctrl Enter
Noticed oshЫbku Highlight text and press. Ctrl + Enter
We are
Sixty Years Since the Formation of the National People’s Army of the GDRMysteries of the last hours of the Reich Chancellery
Military Reviewin Yandex News
Military Reviewin Google News
119 comments
Information
Dear reader, to leave comments on the publication, you must sign in.