Revolver Leach and Rigdon. In fact, it was an exact replica of the Navy 1851 Colt with a steel frame with a round drum and octagonal barrel. Usually revolvers were marked "LEECH & RIGDON NOVELTY WORKS CSA" and a serial number, although sometimes there was no serial number at all. And how this could be is unknown. Some revolvers have a WH stamp on the bottom of the grip. This is the stamp of Captain Hudgins, the Confederate Army's military acceptance inspector.

Weapon and firms. And it was like that. When the Civil War between North and South began, the southerners, to their great surprise, very quickly noticed that they had enough courage, but the weapons were clearly not enough. Moreover, they have nowhere to buy it, because the southern states of the northerners immediately subjected a naval blockade.

Of course, there is no blockade that would be impossible to break, especially on a southern moonless night. And it was possible to deliver cotton to the choking factories of Liverpool and Manchester. And sell it for a good price, but after that I would have to choose. After all, the Confederation needed not only rifles and revolvers, but also medicines for the wounded, sheet copper, explosive mercury (or capsules for guns and pistols). They needed cloth for uniforms, galloons for officers, binoculars, telescopes, hats for officers' wives. In a word, there is so much in total that it was simply impossible to squeeze it all into the small tonnage of the Baltimore schooners (namely, because of their speed qualities, most often they became penetrating ships).

There was only one thing left: to open up the production of weapons. And take the weapon of the opposite side as a model, which is distinguished by the following qualities: high manufacturability and firepower.

And it is not surprising that very soon the owners of many small workshops in the South converted them to the production of military products, and above all revolvers. And today our story will go about these people and their revolvers.

Forks and knives and quality revolvers

Here is how it was. On the eve of the Civil War, Thomas Leach traded in cotton, and Charles H. Rigdon manufactured scales. They had nothing to do with firearms then. But when they joined forces, they were able to produce for the Confederation one of the best revolvers of the time, which could easily compete with the Colt-Marine revolver of 1851 (of which it was an excellent copy).

Leach also produced derringer pistols branded as Thomas Leach & Co., Memphis, Tennessee. And in 1861 he created the Memphis Novelties company, specializing in the production of military cutlery. By the way, the Confederate table knives with their brands have survived to this day.

By May 1862, the company was known as Leech & Rigdon. And she was in Columbus, Mississippi. The partners managed to conclude a contract with the government of the confederate states for the production of 1500 Colt-Marine revolvers of 1851. And the work began to boil. Already on November 26, 1862, the partners had 75 ready-made revolvers in their hands, which they immediately handed over to the army. And then, due to the threat from the northerners, the company was transferred to Greensboro, Georgia. The production of army cutlery was stopped. And all efforts were focused on the release of revolvers. By the time the partnership between Leach and Rigdon ended in December 1863, they had produced about 1000 revolvers. But why their cooperation ended so suddenly is unknown.

But Charles Rigdon was able to buy out all of the company's equipment, retain workers and reopen a plant in Augusta, Georgia. There he was joined by Jesse A. Ansley and two other partners, with whom he founded Rigdon, Ansley & K.

Since the company fulfilled the contract with the government of the Confederation for 1500 revolvers, a new order followed. But now the production of revolvers equipped with 12-slot cylinders has already begun. They are known today as the Rigdon and Ansley revolvers, of which fewer than 1865 were made by January 1000.

When the troops of the American General Sherman invaded Georgia in late January 1865 and began their famous "march to the sea", Rigdon closed his factory. Well, on April 14, 1865, the Civil War ended in Appomattox.

The "Rigdon and Ansley" revolver, externally from the "Colt", differed only in the cylindrical-conical barrel with a small taper and characteristic notches on the drum.

The most mysterious revolver of the Confederation

Among the revolvers made by the Confederates, these are shrouded in mystery. It is believed that they were produced at a plant in Augusta, Georgia. But due to the fact that they do not have a manufacturer's stamp, it is absolutely impossible to say whether this factory has made at least one revolver. The enterprise was called "Augusta Engineering Plant". But none of the American historians managed to find out what kind of military equipment this plant produced.

Anyway, there is a revolver that is considered to be the "weapon from Augusta". It is also an exact replica of the Navy 1851 Colt, with the same octagonal barrel, trigger guard, brass frame and lever for tight bullet control. It is clear that (if not for the war) Colt would have immediately sued the manufacturer of such a revolver. But during the war years in the territory of the Confederation, any manufacturer could do what he wanted.

Known samples are equipped with a drum with six fixing notches. And others with 12 notches. That's the whole difference. Most parts have assembly numbers, but the revolvers do not have a single serial number.

Usually these revolvers (in terms of quantity) are compared with the Columbus revolver, which is known to have been produced in one hundred copies. And since there are still more Augusta revolvers surviving than Columbus revolvers, some speculate that there were at least 100 of them. Incidentally, the only proof that revolvers were made at the Augusta Machine Building Plant is a letter from a certain Wilson, Secretary of the Ministry of Health. It stated that the Confederacy had a revolver factory in Augusta, located between Jackson, Adams, Antignac and Campbell Streets. Major Finney was in charge. It was also reported there that the production of shock revolvers identical to the "Colt Marine" was organized at this plant, and they were considered one of the best in the Confederation.

Interestingly, most of the Confederate left-wing revolvers were produced in Georgia and Texas. The ones made in Georgia are in .36 caliber. And the ones in Texas are mostly .44 caliber (which the Texans, as well as the Indians there, preferred). And if this revolver was produced in Georgia, one wonders, where could it have been made then, besides Augusta? Doesn't he have exactly the same caliber? So for now, Augusta remains the best option historians have to offer.

Colt 1851 from Augusta
The Tucker & Sherrard Company of Lancaster, Texas has become something of a legend. Who ran it? In what time period did it work? Was it really a functioning enterprise or some kind of ghost company set up to fool the spies of the northerners?

These questions arose the day she signed her first contract with the state of Texas in 1862. According to some, it was an ammunition factory. But it turned out that this is not true. It has been suggested that the plant produced other types of weapons besides revolvers. But this was also not confirmed. Finally, it turned out that working in a "military factory" was a good way to get exemption from military service. And that his equipment was used to produce various consumer goods for the civilian market.

However, the most important thing is to find out if she fired more than two revolvers during the war? And weren't the rest collected from the remaining parts after the end of the war? The fact is that to date, only a few revolvers have been discovered with the marking "Lancaster, Texas". But whether they were produced during the civil war or were assembled later from the remaining parts is still not known for sure.

From the letters and notes that have survived, company managers have cited all sorts of problems to explain the production shortage. They complained about the lack of raw materials and tried to squeeze as much money as possible from the Confederate government.

Laban Tucker was definitely one of the founders of this company. But he left the company. And then a certain Clarke replaced him. But why this happened is unknown. In general - a secret on a secret. And we know nothing for certain. Although revolvers were and are. You can hold onto them.

Revolver "Clark and Sherrard"
In any case, there were the Tucker and Sherrard revolvers made during the Civil War. Whereas "Clark and Sherrard" could be sold on the civilian market in the early years after its completion. And, probably, under the control of the administration of the Union. 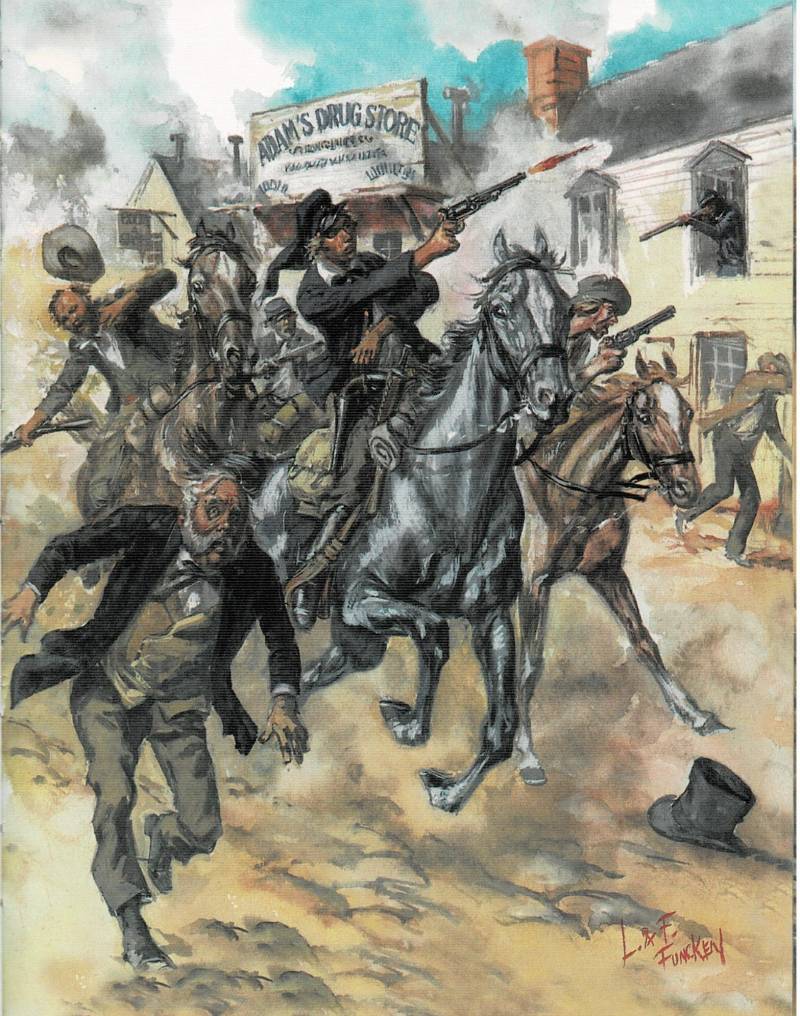 The irregular cavalry of the Southerners caused the Northerners a lot of trouble, making raids on their territory. This drawing by Liliana and Fred Funkenov shows one such partisan raid. Notice how the young man (center) carries his revolvers. This method was called "cross" or "reverse". It meant carrying revolvers in holsters with the handles forward: for the right hand - on the left, and for the left - on the right.
The .44 revolvers are very similar to the second model of the Colt Dragoon revolver. There are seven grooves in the barrel, the drum rotates clockwise. Serial numbers on them are in the same places as on real "Colts".