What Russia has prepared to protect its soldiers in Karabakh

November 24 2020
46
The previous article looked at experience combat use of MRAPs by the US Army. 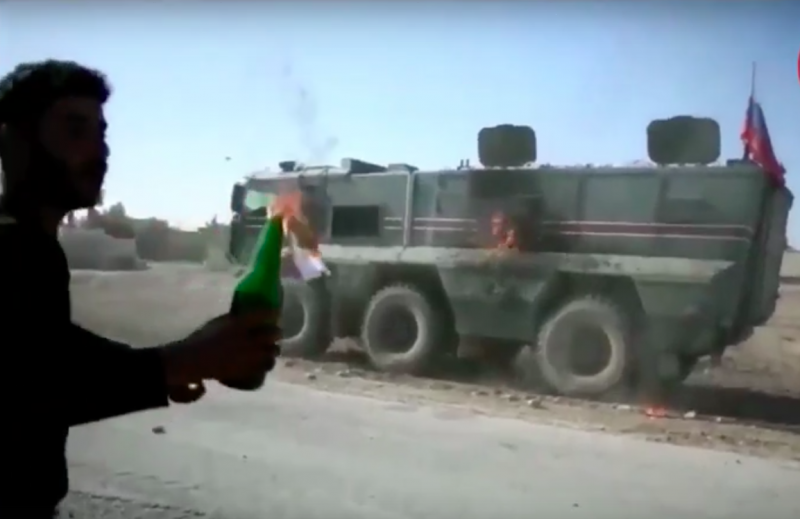 Today we will talk about what Russia has in this direction.
The domestic MRAP park can be conditionally divided into large and small.

Large MRAPs are represented by vehicles of the Typhoon series, which have a prefix to the name indicating the platform - Typhoon-K (Kamaz), Typhoon-U (Ural). Capacity 12-16 people. The armor in the base holds 7,62 in a circle, with the ability to increase protection due to additional modules, up to protection against heavy machine guns. Weight ranges from 18 to 25 tons. 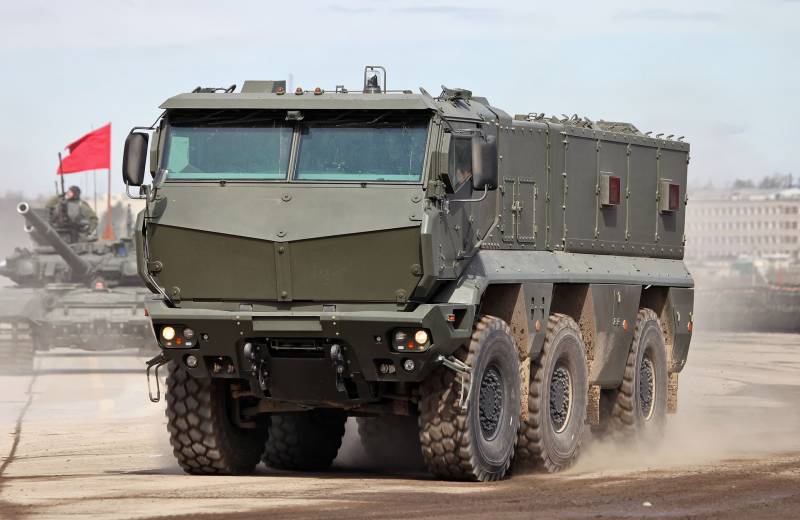 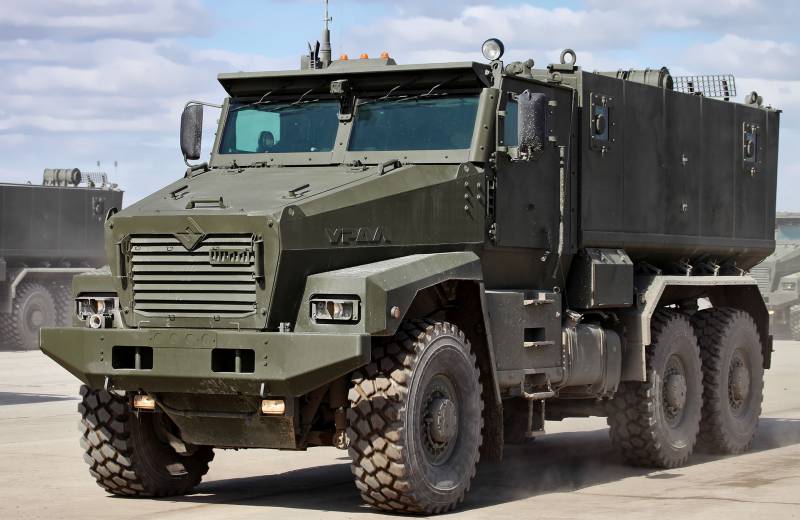 Typhoon U. Photo: Vitaly V. Kuzmin
Taking into account the high cost and complexity of operation mentioned in the last article, at first glance it is not clear why it was necessary to create two cars to solve the same problem?

At first, this decision seems bad, because it leads to an increase in cost, because instead of one large series, two small ones will go into production. So after all, it will also be more difficult to maintain - the range of spare parts required for availability at maintenance points will increase.

However, not everything is so simple. If one plant is made a monopoly, its design bureau will relax and stop "trying". Where will the army go if there are no alternatives? Therefore, "and so it will do."

Foreign experience in this regard is similar. Competition directly affects quality. But at the same time, the state must "guarantee" the design bureau at least a small profit as a result, even if a different option is adopted. In addition, some individual technical solutions can be adapted to the car that won the competition. (For example, in the USA, in addition to companies specializing in army tractors (Oshkosh), firms that traditionally deal with aircraft took part in the competition for the creation of MRAPs).

In the army, both options are used (mono-volume or cabin + compartment), and each of them has its own advantages and disadvantages.

Monovolume improves habitability. It gives the best opportunities for moving the crew inside the vehicle (the ability to quickly replace the driver). Potentially better engine protection (in certain layouts). Another distinctive feature of monovolume is better stability in the presence of potentially hazardous impurities (gas) in the air. The machine is sealed, and the general air conditioning system allows you to comfortably stay inside.

In turn, a separate landing module is also not without its advantages. It allows the development of a unified chassis based platform. That is, (if necessary) the troop compartment is removed. And in its place is installed any other promising module, including weapons modules (air defense, OTRK, barrel artillery).

Or vice versa, if there were hits from large calibers or grenade launchers into the armored capsule, and its repair may be impractical, then in this case only it is replaced.

Ergonomics and fit options inside

Survival is influenced not only by the class of protection, but also by how the fighters are placed inside the capsule. The fact is that the secondary damaging factors can be loose equipment or protruding parts of the "interior".

At the moment, research is underway in this direction, similar to those carried out in the field of civilian automotive industry. The impact of various factors on the safety of fighters is being studied - the optimal distance from the head to the ceiling, the angle at the knee joint, the method of fastening the back, the design of the belt system and head restraints, etc. As a result, various options are gradually tested and the most successful ones are selected.

There is a video of comparison of Ukrainian and Russian MRAPs on the network (below it is "rewound" to the moment we are interested in).


In this video, the author points out that the Typhoon has an unsuccessful mount weapons, which the fighters will run into. But in the Ukrainian car, weapons are offered to be stored in boxes.

I think that in the event of the start of shelling, the soldiers will only be happy to rest against their weapons, and not rush to their boxes en masse.

In reality, the boxes are intended for storing "additional equipment", but not for fixing the regular one. That is, in the Ukrainian version, in fact, there is no alternative to weapon mounts (besides the fact that Kraz himself not soon).

It should also be understood that in this video only "one of" the options for using the internal volume was considered. In it, the developers provide for the availability of a volume of 20 liters for the needs of each soldier to accommodate additional equipment. And this volume is located behind back of each fighter.

If you look closely, you can see that the chairs are not at wall level, but pushed forward.

There is a landing pattern with an extended passage. 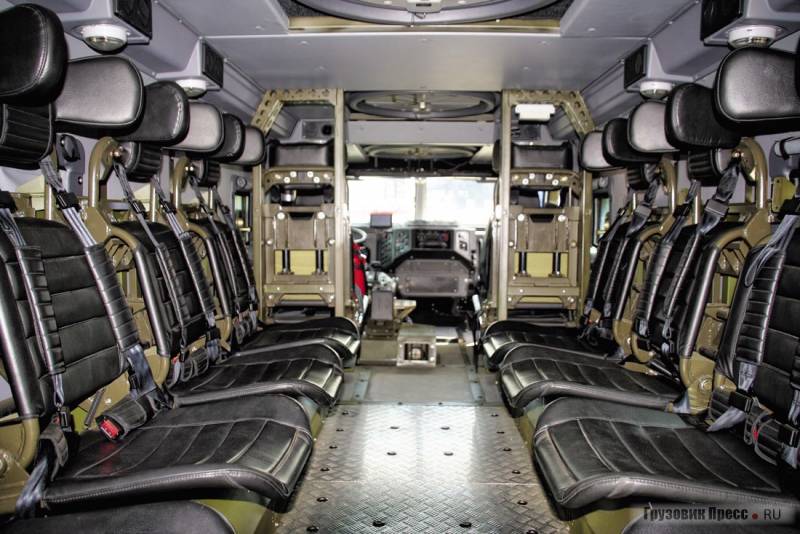 Time will tell which option will be "rejected" by the military as a result of exploitation in Syria. Although I think the answer is obvious.

I would also like to separately mention the restraints for the head. They prevent dangerous loads on the cervical spine that occur during blasting.

There are a lot of combat modules developed, with a kind of electronic filling and in different calibers.

As for the calibers, it should be borne in mind that the MRAP has a large height. Because of this, the recoil momentum acts on the chassis with a large lever, which helps the body to rock. As a result, despite the significant weight, it becomes difficult to conduct aimed fire from a 30-mm cannon at a distance adequate for this caliber (2–3 km).

Therefore, it is assumed to use smaller calibers, conventionally "before KPVT"

The remote control option is certainly more technological, but it has its drawbacks - fault tolerance.

Whatever problem arises (control panel, barrel, turning mechanism, optical system), the entire module becomes non-combatant. Which is very relevant if we remember stories about the operation of such equipment in remote areas.

In the case of a turret, if something happens, another weapon is simply installed.

The use of a grenade launcher

The customer (represented by the Ministry of Defense) was proactively asked to develop systems for shooting smoke screens. However, this option was not approved. The situation may change in the future.

As an alternative, it remains possible to include a pair of GM-94 with different types of ammunition in the "standard delivery set".

This solution will allow the use of smoke, gas, stun and fragmentation grenades. 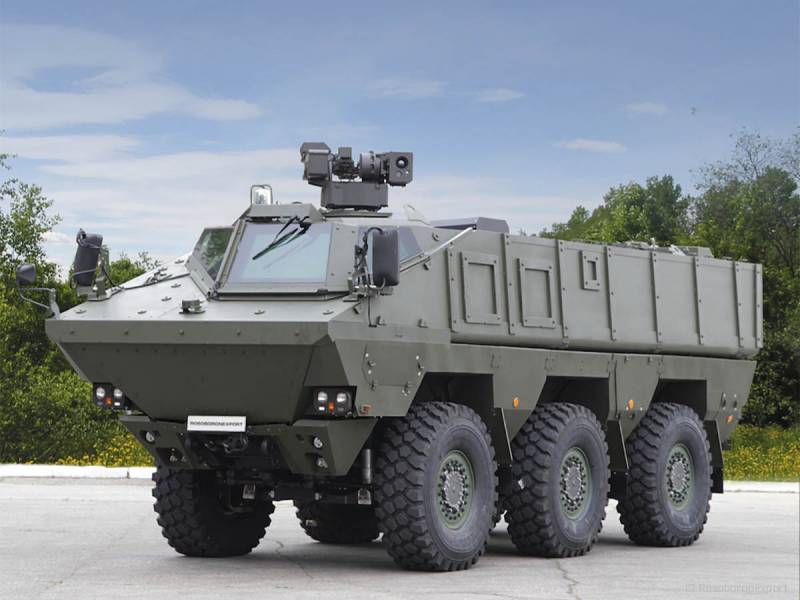 As can be seen from the shape of the cockpit, this is a more "tanking" version, which also affects the weight. It is close to 28 tons.

The following systems are available as "options" in this version (and in other vehicles):

- an autonomous diesel installation supplies power to the grid when the engine is off;
- automatic fire extinguishing;
- all-round cameras;
- automatic tire inflation.

Small cars are serially represented by "Tigers" of various modifications, among other things, differing in protection classes (from 3 to 5). Capacity from 5 to 7 people (numbers up to 9 are officially indicated).

They are characterized by everything the same as for the "big" brothers. They test different technical solutions: how to sit, what to sit on, how to mount weapons, place ammo, etc.

I would also like to mention the Strela car. 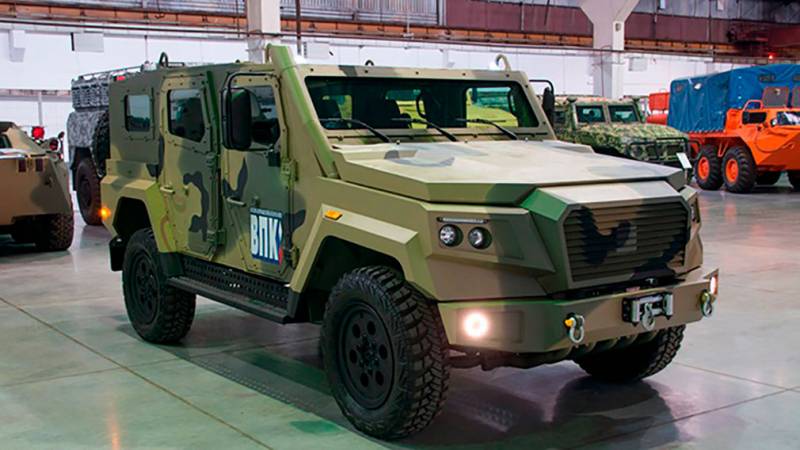 On the hull from the factory there are special mounts for transportation on the external sling of the Mi-8 helicopter over distances of up to 500 km. This solution is most relevant in mountainous areas (where 500 km is not 500 km on the German Autobahn, but 1000 km of a mud safari with slopes of 20 degrees).

Otherwise, it was announced that this car in comparison with the "Tiger" (about the same as the new razor "Gillette" with three blades versus the one with only two) is the same, but only faster, lighter, and better protects. How much this is true is difficult to say.

What is missing from our MRAPs?

Technically speaking, Russia has everything it needs. Therefore, improvements require not so many parameters.

One of the main tasks is patrolling and surveillance. In order to implement this function as efficiently as possible, it is necessary to equip the existing samples with an optoelectronic complex on a retractable mast. Such complexes are actively used in the organization of modern observation points on the state border of the Russian Federation (and everywhere in the world).

They usually include high-magnification optics in combination with various bells and whistles in the form of a thermal imager, etc. Despite the fact that light reconnaissance UAVs are now actively used, such a mast makes it possible not to depend on the presence of a drone in the air. It will also greatly increase the potential of the equipment in the context of autonomous monitoring of the area, increase the safety of the crew, eliminating a number of situations when it may be necessary to leave the protected vehicle.

This solution also makes it possible to increase the survival of the vehicle itself, due to the ability to conduct surveillance from behind shelters, hiding a large side projection behind a fence, house or natural landscape elements. At the same time, increasing the secrecy of such an observation post. Such a solution allows you to protect vehicles from ATGM attacks or from a large-caliber machine gun on a pickup truck.

Another "technical" aspect of development is the replacement of foreign components with domestic ones. Work in this direction is also underway. For example, initially French tires were used, now their Russian counterparts have appeared. The situation is similar with engines (although there are some complaints).

In conclusion, I would like to consider one episode of the practical application of MRAPs as a patrol vehicle.


What tactical remarks can you make based on what you see?

1. It is necessary to exclude patrol missions on vehicles not equipped with protective systems.

2. It is necessary to be flexible in the configuration of patrol cars, taking into account the characteristics of the area. Consideration should be given to including both lethal and non-lethal weapons (gas, smoke, stun grenades) in self-defense equipment. The presence of only lethal weapons in some situations can, on the contrary, reduce safety. When an officer, on the one hand, needs to protect his soldiers, and on the other, he does not want the whole world to discuss “pregnant Fatima killed by outrageous peacekeepers” on social networks the next day.

3. Crews should be prepared for different scenarios. So, for example, it is necessary to prescribe protocols of action and regularly train personnel. In the situation shown, the hatches must not be left open.

Based on the specifics of the tasks and the equipment used, I consider it necessary to apply an integrated approach, from technical retrofitting to the selection and training of crews. Up to the creation of a separate unit based on the military police.

On the whole, Russia is adequately developing this type of technology. The possibility of a sharp increase in the output of such machines, if necessary, is provided (due to the distribution of production among different plants). Work is underway to replace imported components.

Ctrl Enter
Noticed oshЫbku Highlight text and press. Ctrl + Enter
We are
Commentary on A. Petrov's interview “Fire and Tactics in the Russian Army: Another Look”What you didn't want to know about England
Military Reviewin Yandex News
Military Reviewin Google News
46 comments
Information
Dear reader, to leave comments on the publication, you must sign in.