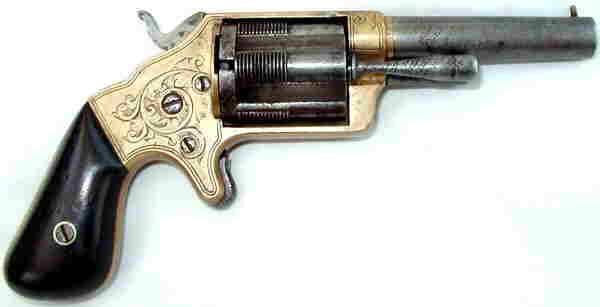 Always go around!
(Aibolit-66. Music B. Tchaikovsky, lyrics by V. Korostylev)
Military affairs at the turn of the eras. It often happens that one of the inventors manages to come up with something that gets across the throat of everyone else. But ... they can do nothing and there is only one thing for them to do: try to circumvent his patent, inventing on its basis something quite similar, but not identical. And, perhaps, there is no better example than the struggle of many inventors against Rollin White's patent for his thoroughly drilled revolving drum.

Rollin White's patent for a capsule revolver with a paper cartridge. And who would have thought that all the wealth and power of the Smith & Wesson company would be built on this very “piece of paper” ?!

The law is strong, but it's law!

It all started with the fact that two American engineers Horace Smith and Daniel Wesson in 1856 created a company to develop and produce a revolver designed for a metal cartridge. That is, they showed considerable foresight and foresight, since everyone else, including their main rival Samuel Colt, was content with paper cartridges. They started by looking at existing patents and found that Rollin White had patented a drilled-through revolver barrel for a paper cartridge some time ago. Since the same drum design could be used for metal cartridges, Smith and Wesson agreed with Rollin White to transfer the patent to them. For this they had to pay him a small fee for each revolver sold, provided that he pays any legal costs associated with protecting his patent and its violations.

The success of Smith and Wesson's revolvers chambered for metal cartridges came to them already in 1857 and aroused frank and blackest envy among their fellow gunsmiths. Immediately, analogues appeared, some of which were clear and unconditional violations of White's patents, while there were also specially designed to circumvent the patents of Smith and Wesson. And in no way can one deny the ingenuity of American gunsmiths, who quickly enough created a number of completely unique designs of metal cartridges and drums for revolvers that circumvented the patents of White and Smith and Wesson. In the end, only Rollin White himself was the loser. He was busy filing patent infringement suits, and his wallet was empty. Ultimately, the courts ruled in his favor in 1862, and its full execution did not take effect until 1865. White's patent for his drum should have expired sometime in 1871 or 1872. But he, poor fellow, went bankrupt, paying legal costs until that time. 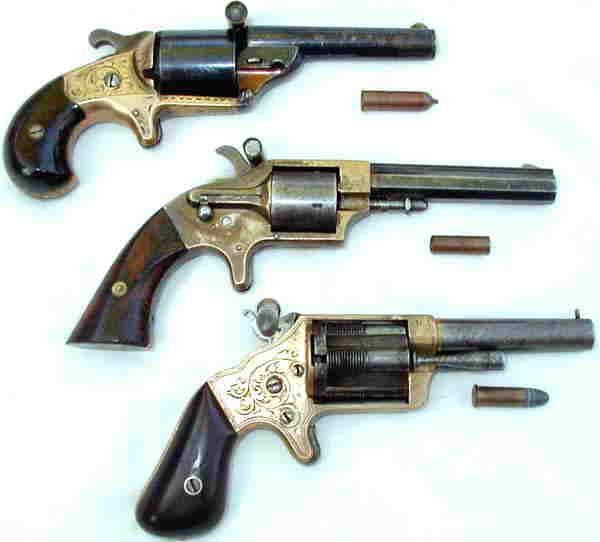 The most original designs embodied in metal were three: a pocket revolver of the "Patented Firearms Company weapons Moore ", who developed it for a completely original, so-called" nipple cartridge ", a pocket revolver with" side loading "chambered for" side fire "of the Brooklyn Arms Company and, again, a pocket revolver developed by the Factory Production Company, which was produced by a the company "Mervyn and Bray in New York" - it also used "nipple cartridges, and its drum was also loaded from the side of the barrel and did not have a through hole of the same diameter in it, but it had an original vacuum system.

Moore and Williamson cartridge .32 (7,9 mm). Appearance. By the way, now among collectors one such cartridge costs 65 dollars! 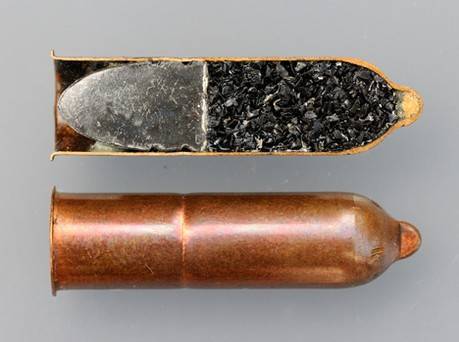 Moore and Williamson's patron cutaway
The Moore and Williamson cartridge, available in .32 and .45 calibers, was used in Moore's own revolvers and National Arms belt-type revolvers, which proved to be very popular with both soldiers and civilians during the American Civil War. National Arms produced about 1864 of these revolvers from 1870 until the 30s, which seems to be a real commercial success! 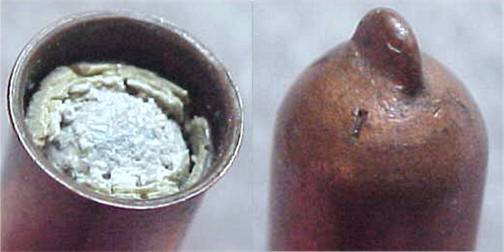 The same cartridge: neck and primer

This cartridge was a copper case with an open neck and a small protrusion on the rounded rear end of the case. The sleeve contained both gunpowder and a bullet, and a primer was in the "nipple". And so she just protruded through a tiny hole in the back of the drum chamber and thus White's patent was not violated in any way! On this primer hit the trigger, as a result of which a shot occurred. The front neck of the cartridge had a slightly widening rim, and the bullet inside it was completely immersed in "cannon fat". 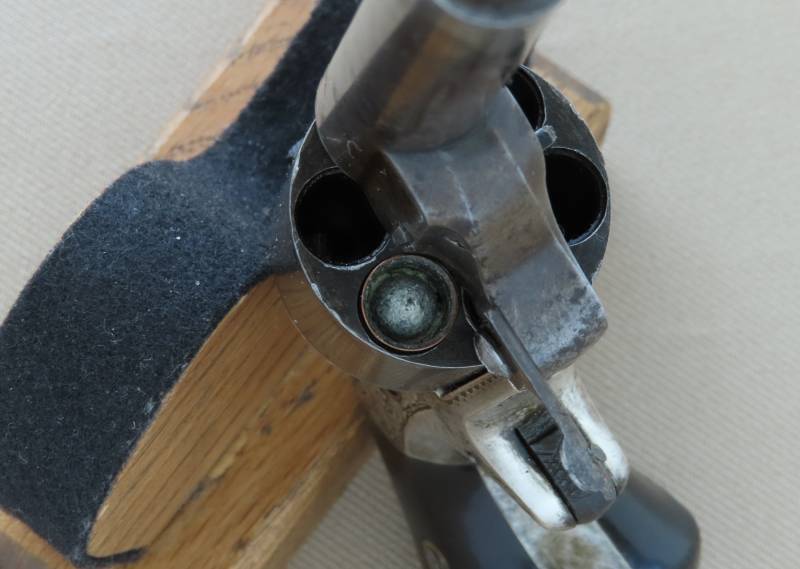 View of the cartridge in the drum of Moore's revolver 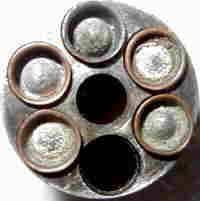 Cartridges in the drum of Moore's revolver. Drum front view 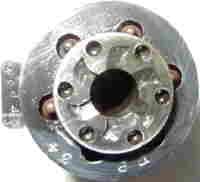 Cartridges in the drum of Moore's revolver. Drum back view
Therefore, the breakthrough of the powder gases when fired to the powder charge of the cartridge, as well as its getting wet from water, were completely excluded! There were two types of "nipples": round and flat. The flat is most commonly found among collectors today. The disadvantages of the cartridge include two features of its design. The first is, in fact, the nipple capsule - it was impossible to replace it, which automatically turned all Moore's cartridge cases into disposable. They did not allow re-equipment! The second drawback was that it was necessary to load the revolver drum with these cartridges from the front, and in the chamber they, in fact, were held only due to the friction force. Therefore, from vibration they could loosen in the drum. 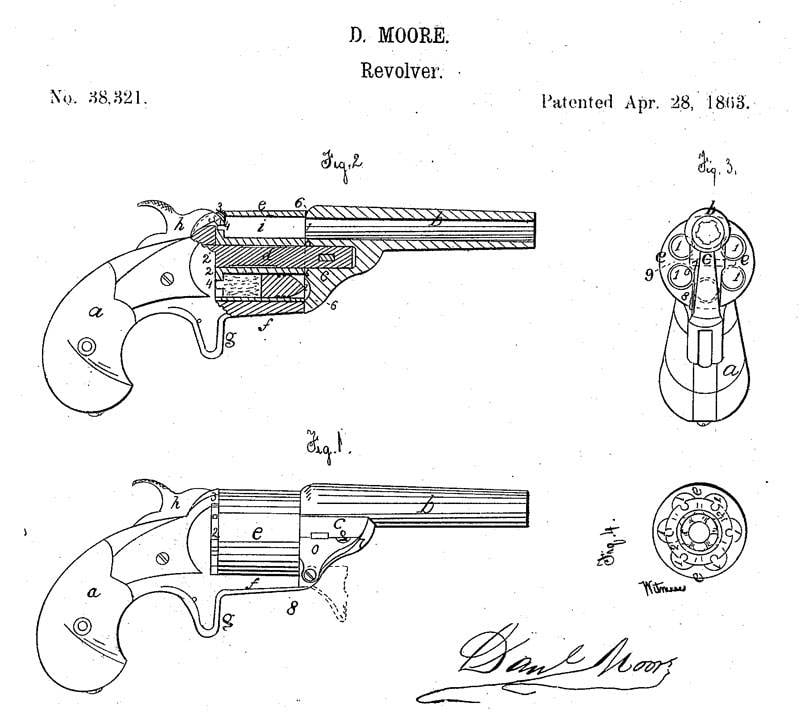 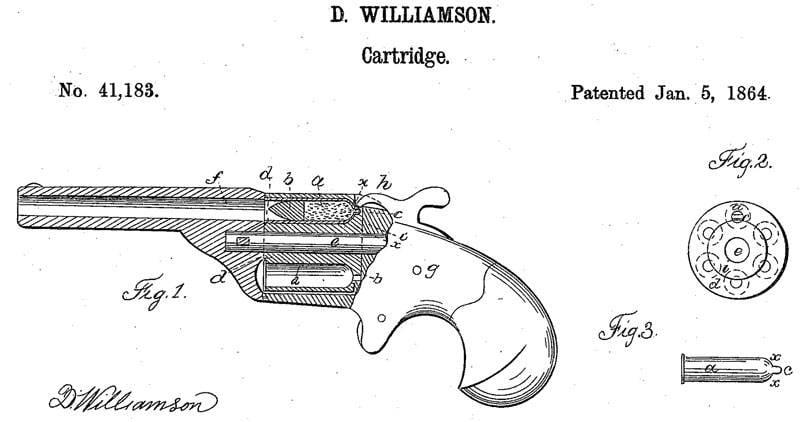 Drawing from David Williamson's patent for an improved nipple cartridge and revolver under it (US Patent No. 41183 dated January 5, 1864)
The revolver had a six-round drum and a three-inch long barrel-conical barrel. The frame is brass, open, which could have been plated with silver. The barrel and magazine had an original dark blue finish. The bird's paw handle with walnut cheeks. This model has a small hinged bolt on the right side of the barrel in front of the drum, with which the spent cartridges were removed from the drum. 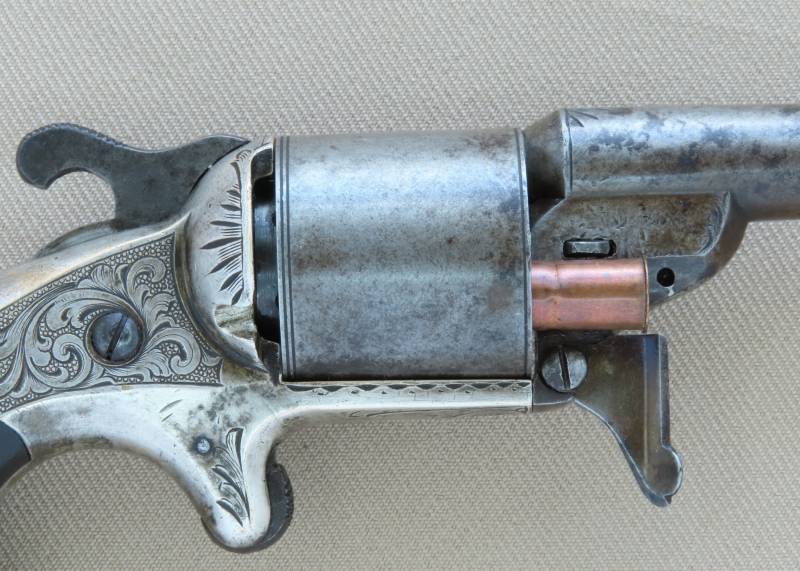 Not only charge, but also discharge quickly!

The revolver of the Factory Production Company was made in the mid-1860s with a total circulation of about 20 thousand pieces. It had a .30 caliber, a three and a half inch octagonal barrel, a brass frame, and a blued barrel and drum. He also fired “teat cartridges, but had an original high tide vacuum system on the frame on the right side behind the drum, which was a pusher rod with an L-shaped handle with a“ ball ”at the end. Barrel markings - MERWIN & BRAY-FIRE-ARMS CO. NY ”The drum is marked“ PAT. JULY 12, 1859 AND JULY 21, 1863 ". 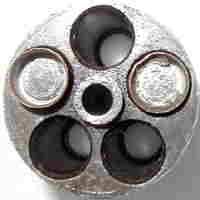 Drum with revolver cartridges of the "Factory Production Company"

A drum with a door is, of course, something!


Finally, the third revolver, called "Slocum", which was produced in the amount of about 10 copies from 000 to 1863. It was a five-shot .1864 caliber revolver with a unique side loading system. Its essence is that the chambers on it had sliding "covers" that could move along the drum along the inner grooves, thus opening the chambers from the outside. After that, it was possible to put cartridges into them so that their protruding capsules fell into the holes in the rear wall of the drum, and ... slide the covers back, firmly fixing the cartridges in the chambers! Well, to discharge the drum, it was enough just to move these covers and ... shake the revolver. On the trunk there is the BA Co. PATENT APRIL 32, 14 ". 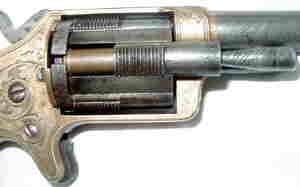 And now she is completely shifted
Thus, all three revolvers represent attempts to circumvent Rollin White's patent. Each was successful for a period of time, until Rollin White won all lawsuits against their developers, although he lost all his fortune in doing so. By the way, after that Moore's company was acquired by the Colt company.

PS Please note that all these revolvers are pocket revolvers! For a long time, Colt practically ignored this niche and as a result got a situation where three small firms actually ousted his company in this segment from the market!