Pulse detonation engines as the future of missiles and aviation 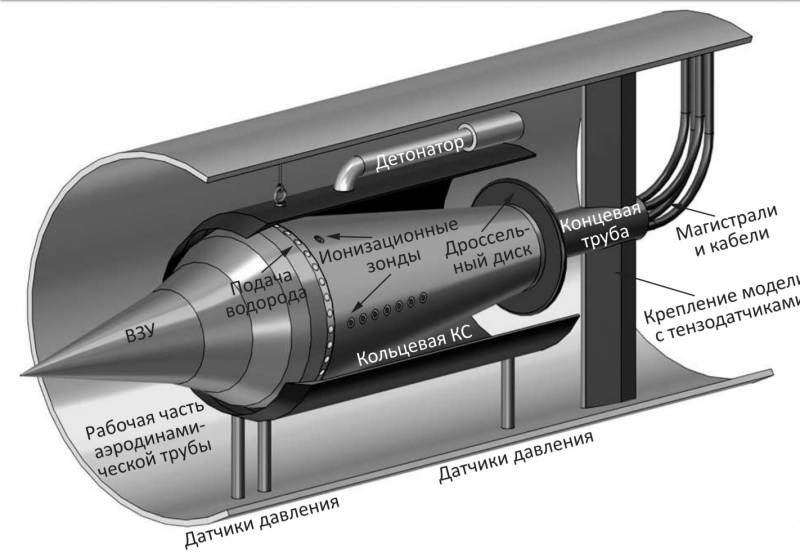 Existing propulsion systems for aviation and rockets show very high performance, but are very close to the limit of their capabilities. To further increase the thrust parameters, which creates a groundwork for the development of the aviation rocket and space industry, other engines are needed, incl. with new principles of work. Great hopes are pinned on the so-called. detonation engines. Pulse-class systems of this type are already being tested in laboratories and on aircraft.

Existing and operating liquid fuel engines use subsonic combustion or deflagration. A chemical reaction involving fuel and an oxidizer forms a front that moves through the combustion chamber at a subsonic speed. This combustion limits the amount and speed of reactive gases flowing out of the nozzle. Accordingly, the maximum thrust is also limited.

Detonation combustion is an alternative. In this case, the reaction front moves at supersonic speed, forming a shock wave. This combustion mode increases the yield of gaseous products and provides increased traction.

The detonation engine can be made in two versions. At the same time, impulse or pulsating motors (IDD / PDD) and rotary / rotating ones are being developed. Their difference lies in the principles of combustion. The rotary engine maintains a constant reaction, while the pulse engine operates due to successive "explosions" of a mixture of fuel and oxidizer.

In theory, its design is no more complicated than a traditional ramjet or liquid-propellant rocket engine. It includes a combustion chamber and nozzle assembly, as well as means for supplying fuel and oxidizer. In this case, special restrictions are imposed on the strength and durability of the structure associated with the peculiarities of the engine operation. 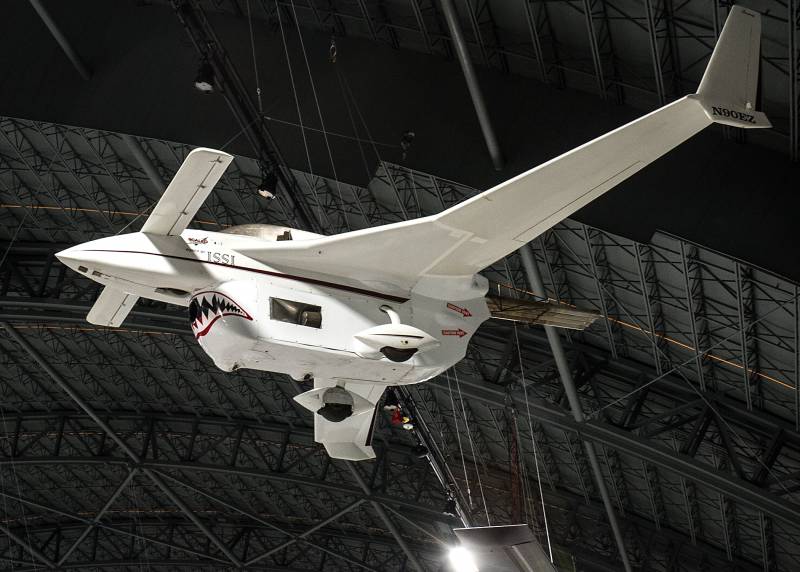 Experimental Long-EZ aircraft with IDD. Photo National Museum of USAF
During operation, the injectors supply fuel to the combustion chamber; the oxidizing agent is supplied from the atmosphere using an air intake device. After the formation of the mixture, ignition occurs. Due to the correct selection of fuel components and mixture proportions, the optimal ignition method and the configuration of the chamber, a shock wave is formed, moving in the direction of the engine nozzle. The current level of technology makes it possible to obtain wave speed up to 2,5-3 km / s with a corresponding increase in thrust.

IDD uses a pulsating principle of operation. This means that after detonation and the release of reactive gases, the combustion chamber is blown out, re-filled with a mixture - and a new "explosion" follows. To obtain a high and stable thrust, this cycle must be carried out at a high frequency, from tens to thousands of times per second.

The main advantage of the IDD is the theoretical possibility of obtaining improved characteristics that provide superiority over existing and prospective ramjet and rocket engines. So, with the same thrust, the impulse motor turns out to be more compact and lighter. Accordingly, a more powerful unit can be created in the same dimensions. In addition, such an engine is simpler in design, since it does not need a part of the instrumentation.

IDD is operational in a wide range of speeds, from zero (at the start of the rocket) to hypersonic. It can find application in rocket and space systems and in aviation - in civil and military fields. In all cases, its characteristic features make it possible to obtain certain advantages over traditional systems. Depending on the needs, it is possible to create a rocket IDD using an oxidizer from a tank, or an air-reactive one that takes oxygen from the atmosphere.

However, there are significant drawbacks and difficulties. So, in order to master a new direction, it is necessary to carry out various rather complex studies and experiments at the intersection of different sciences and disciplines. The specific operating principle makes special demands on the engine design and its materials. The price of high thrust is increased loads that can damage or destroy the engine structure. 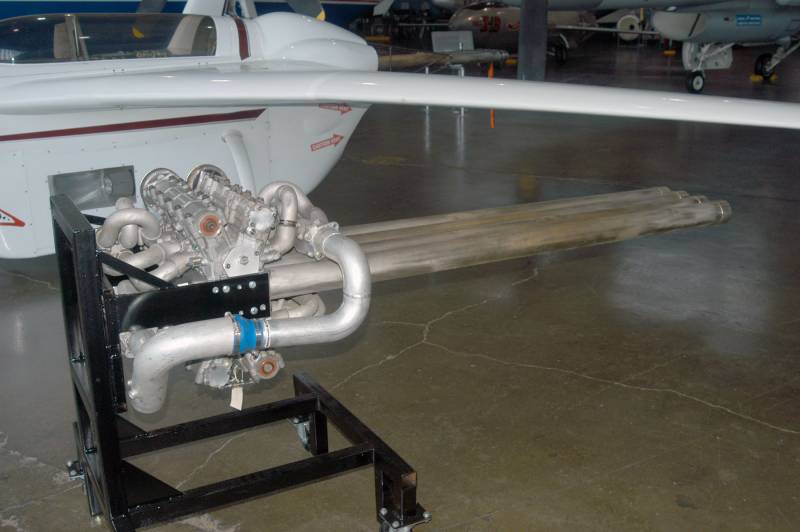 IDD for Long-EZ. Photo National Museum of USAF
The challenge is to ensure a high rate of fuel and oxidant delivery, corresponding to the required detonation frequency, as well as to perform a purge before fuel delivery. In addition, a separate engineering problem is the launch of a shock wave at each cycle of operation.

It should be noted that to date, the IDD, despite all the efforts of scientists and designers, are not ready to go beyond laboratories and test sites. Designs and technologies require further development. Therefore, it is not yet necessary to talk about the introduction of new engines into practice.

It is curious that the principle of a pulsed detonation engine was first proposed not by scientists, but by science fiction writers. For example, the submarine "Pioneer" from the novel by G. Adamov "The Mystery of Two Oceans" used IDD on a hydrogen-oxygen gas mixture. Similar ideas appeared in other works of art.

Scientific research on the topic of detonation engines began a little later, in the forties, and the pioneers of the direction were Soviet scientists. Later, in different countries, attempts were made to create an experienced IDD, but their success was seriously limited by the lack of the necessary technologies and materials.

On January 31, 2008, the DARPA agency of the US Department of Defense and the Air Force Laboratory began testing the first flying laboratory with an air-breathing type IDD. The original engine was installed on a modified Long-EZ aircraft from Scale Composites. The power plant included four tubular combustion chambers with liquid fuel supply and air intake from the atmosphere. At a detonation frequency of 80 Hz, a thrust of approx. 90 kgf, which was enough only for a light aircraft. 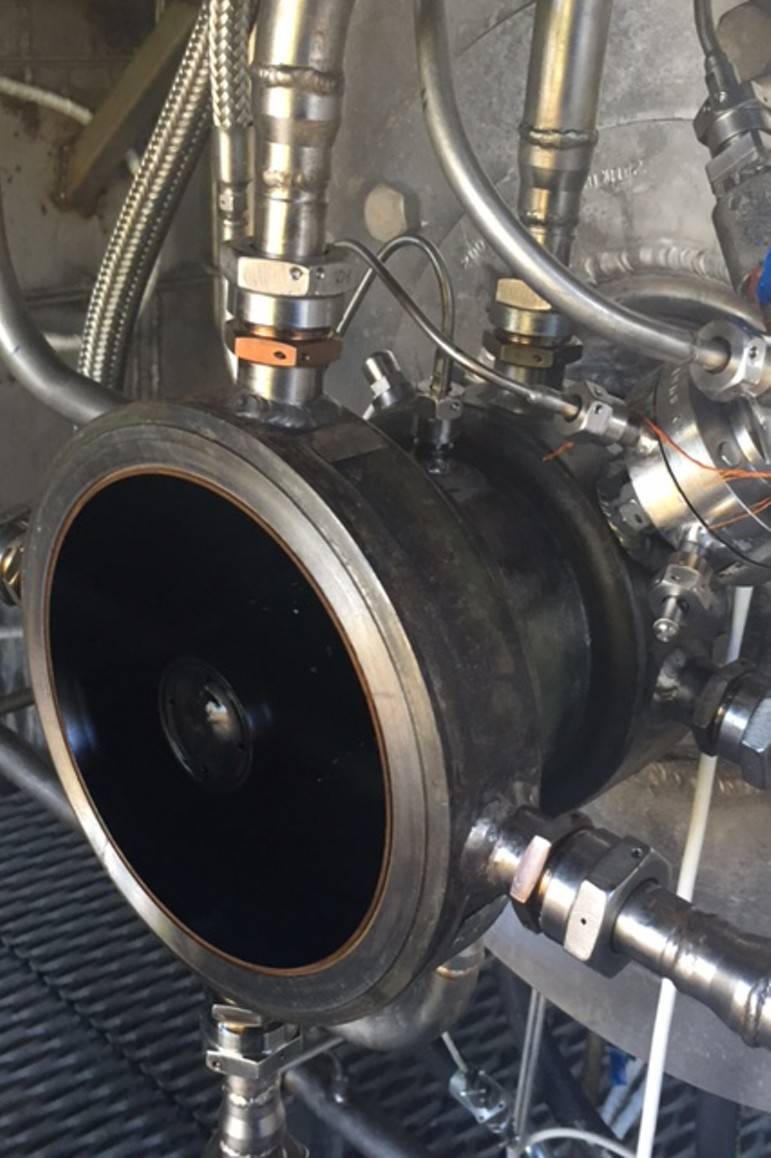 Russian rotary detonation engine "Ifrit". Photo by NPO Energomash
These tests showed the fundamental suitability of the IDD for use in aviation, and also demonstrated the need to improve designs and increase their characteristics. In the same 2008, the prototype aircraft was sent to the museum, and DARPA and related organizations continued to work. It was reported about the possibility of using IDD in promising missile systems - but so far they have not been developed.

In our country, the subject of IDD was studied at the level of theory and practice. For example, in 2017, the Combustion and Explosion magazine published an article about tests of a detonation ramjet engine running on gaseous hydrogen. Also, work continues on rotary detonation engines. A liquid-propellant rocket motor, suitable for use on missiles, has been developed and tested. The issue of using such technologies in aircraft engines is being studied. In this case, the detonation combustion chamber is integrated into the turbojet engine.

Detonation engines are of great interest from the point of view of application in various fields and fields. Due to the expected increase in the main characteristics, they can, at least, squeeze out the systems of existing classes. However, the complexity of theoretical and practical development does not yet allow them to come to use in practice.

However, positive trends have been observed in recent years. Detonation engines in general, incl. impulse, increasingly appear in the news from laboratories. The development of this direction continues, and in the future it will be able to give the desired results, although the timing of the appearance of promising samples, their characteristics and areas of application are still questionable. However, reports of recent years allow us to look to the future with optimism.

Ctrl Enter
Noticed oshЫbku Highlight text and press. Ctrl + Enter
We are
Detonation engines. Successes and prospectsRotary detonation engines - an economical perspective
81 comment
Information
Dear reader, to leave comments on the publication, you must to register.