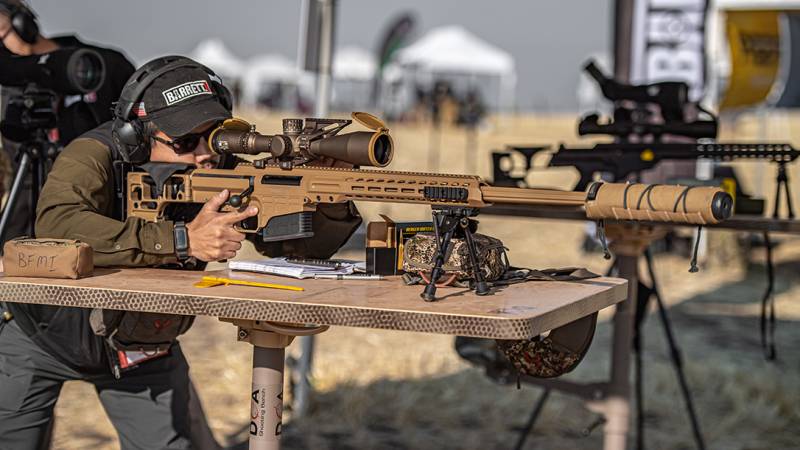 American special forces will soon receive a new modular multi-caliber sniper rifle from the Barrett company. The model, which received the military index Mark 22, is also known under the abbreviation MRAD (Multi-Role Adaptive Design). The US Special Operations Command has already placed an order for the supply of new rifles. The start of operation of the first samples in the army is expected in January 2021.

The production of a new modular sniper rifle for the American special forces is handled by the Barrett company. This is a relatively young manufacturer of small arms weapons from USA. The company was founded in 1982. Despite its small age by weapon standards, this company is well known and known to everyone who is fond of small arms. The main product in the company's lineup is the Barrett M82 antimaterial sniper rifle, which was adopted for service under the designation M107. Many rightly believe that it was this model that at one time returned interest in large-caliber sniper weapons. Today, 12,7 mm sniper rifles are no longer a rarity in the armies of many countries, and there are models in the market in more evil calibers.

The fact that American special forces have turned to Barrett Firearms Manufacturing products will certainly strengthen the company's position in the United States and in the world. First of all, as an important manufacturer of modern high-precision rifles of the highest class. Other models of the special forces unit simply will not be of interest. It is known that the contract for the supply of Mark 2019 sniper rifles, signed back in March 22, was estimated at $ 49,9 million. US Department of Defense special operations units are expected to begin operating new Barrett sniper rifles as early as January 2021.

According to the American edition of Business Insider, not only special forces are interested in the new modular multi-caliber rifle. The US Army and the Marine Corps are ready to purchase new weapons. In published budget requests for 2021, the Army has requested 536 MRAD sniper rifles totaling over $ 10 million. Rifles must be purchased through the separate Precision Sniper Rifle (PSR) program. In the American army, they plan to replace the M107 and M2010 sniper rifles. It is also known about the interest in this model and the US Marine Corps, which requested 250 such rifles. The Marines are ready to allocate $ 4 million for this purpose. The ILC expects that the new Mark 22 multi-caliber rifles will replace all existing bolt-action rifles.

It is known that the Barrett MRAD rifle was designed at the turn of the 2010s. In 2012, this model was recognized by the US National Rifle Association as the best sniper rifle of the year. In 2013, the model began to be exported and entered service with SWAT. The first foreign operator of the rifle was the Yamam, Israel's National Counter Terrorism Unit. After positive operating experience, the rifle was adopted by the Israel Defense Forces - the IDF (the Israel Defense Forces). The rifle only reached the American military by 2021.

It is curious that in 2013 the Remington MSR model won the PSR (Precision Sniper Rifle) competition for the creation of a new sniper rifle for the Special Operations Command and for the needs of the US Armed Forces. At the same time, a contract was signed for the supply over 10 years of more than 5 such rifles and almost five million cartridges for them. The model was adopted as the Mark 150. However, by the end of the second decade of the XXI century, it became clear that this rifle no longer meets the requirements of the US Special Operations Command. The competition for a new sniper rifle was restarted, it was won by the Barrett MRAD rifle, designated Mark 21. What exactly does not suit the American military in the Remington MSR (Mark 22) rifle was not officially announced.

Features of the Mark 22 rifle

The main feature of the American Barrett MRAD sniper rifle is its modular design and multi-caliber capability. The manufacturer declared the possibility of using this model in seven calibers at once. The use of different calibers directly affects the length of the barrels, the length of the rifle itself and its weight. At the same time, such a variety allows the shooter to easily adapt the weapon to the combat missions to be solved. Barrels can be changed very quickly and easily, for this procedure the fighter will need only one special key, so the barrel can be changed in the field as well. 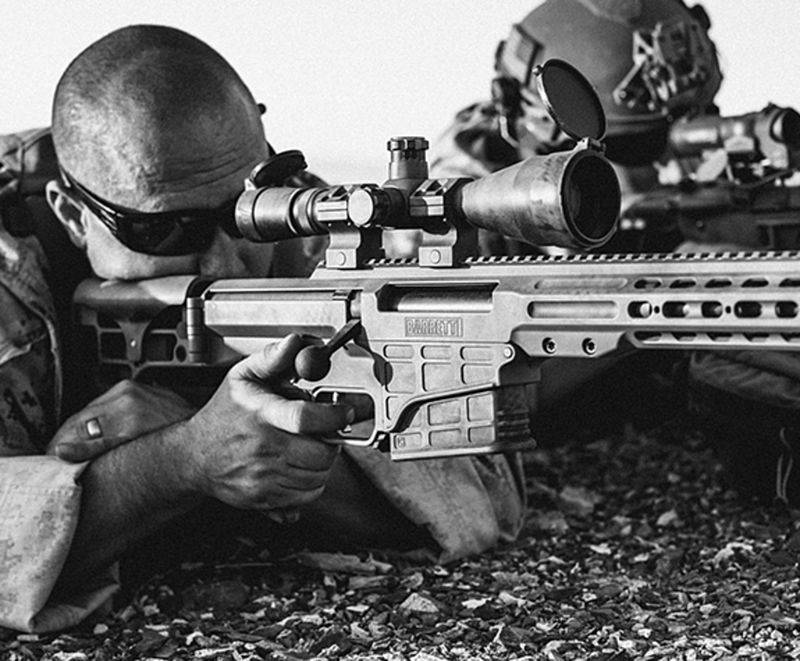 The military version of the Mark 22 rifle, according to the manufacturer's website, is produced in three main calibers: 338 Norma Magnum (8,6 x 64 mm), 300 Norma Magnum (7,62 x 64) and the good old 7,62x51 NATO. The most promising in this line is the 300 Norma Magnum cartridge, which was selected by the Special Operations Command for new sniper rifles in 2016. With a smaller caliber, this ammunition provides the shooter with comparable target range capabilities as the 338 Norma Magnum or 338 Lapua Magnum. At the same time, the bullet retains its supersonic flight speed even at a distance of 1 meters, providing very high firing accuracy with less recoil.

Barrel length chambered for 338 Norma Magnum is 686 mm, chambered for 300 Norma Magnum - 660 mm, chambered for 7,62 x 51 mm - 508 mm. The rifling pitch of the barrel for 8,6 mm cartridges is 239 mm, for 7,62 mm - 203 mm. The total length of the Barrett MRAD Mark 22 is from 1 to 107 mm and weights from 1 to 270 kg. All rifles are equipped with box-shaped polymer magazines designed for 6,3 rounds, as well as a Picatinny rail, which is placed on top of the receiver, the total length of the rail is 7 mm. The presence of this bar allows you to install a variety of models of modern sniper sights on the rifle. All rifle barrels received a two-chamber muzzle brake-compensator.

The features of the model also include the ability to quickly remove and disassemble the trigger block without the use of special tools. This makes it easier to service the weapon in the field and adjust the rifle, including adjusting the force on the trigger. The stock is adjustable in length and cheek height. On the Mark 22 model, the stock is folding (on the right side), and this version of the rifle also received a bipod.

The rifle is relatively lightweight, which is achieved by the massive use of aluminum and modern composite materials. For example, the entire receiver is made of high-strength aluminum alloy. The model uses match-type barrels with longitudinal valleys, which should contribute to better cooling, increasing the rigidity of the structure, and also reducing the total weight of the weapon. Barrett MRAD rifle barrels are free-hung, attached directly to the receiver. In this case, to replace the barrel, the arrow needs to unscrew only two Torx screws. In addition to the DTK, silencers can be installed on rifle barrels. 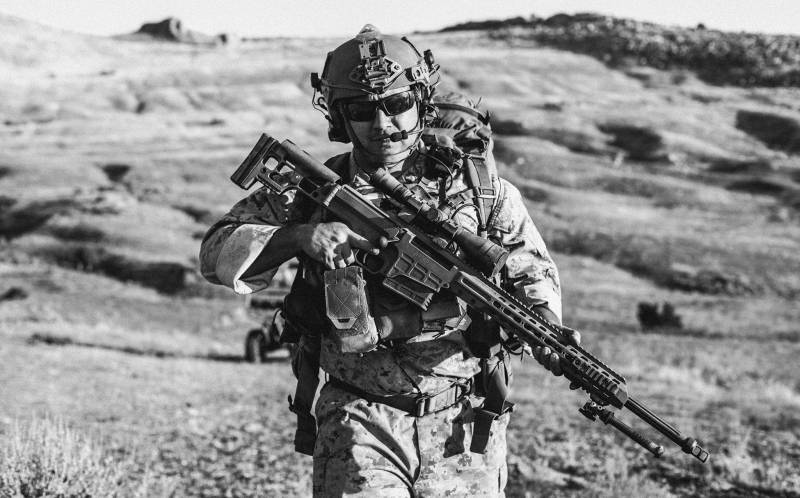 How the Mark 22 rifle is evaluated by the US military

Published budget requests from the US Marine Corps say Barrett's new Mark 22 sniper rifles provide "increased range, greater lethality and a wider range of special-purpose ammunition." The US Army statement states that this model of small arms has an increased firing range. An increase in the range of combat allows you to expand sniper capabilities, and also provides the fighter with superiority in counter-sniper combat.

Also in the US Army said that the new sniper rifle is lighter than some of the outdated sniper systems in service. In the future, the new rifle should become the main anti-personnel sniper weapon system in all US army sniper teams. US Army Lt. Col. Chris Kennedy noted that the multi-caliber weapon will provide the sniper with greater flexibility in choosing a configuration and determining what targets he will work for.

US Army First Sergeant Kevin Sipes called the Mark 22 an amazing weapon. In an interview with Business Insider, he noted that he did not notice anything in this model of small arms that he would not like:

“The rifle shoots phenomenally well. The possibilities it provides in terms of quick barreling is at least quite unusual. " 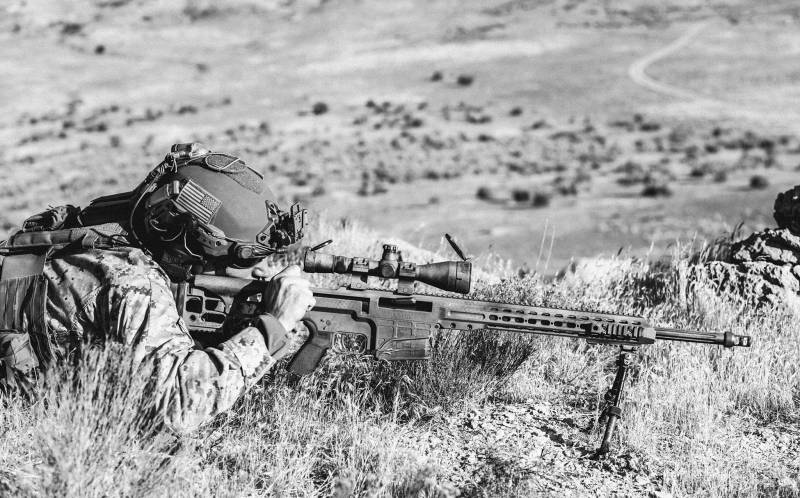 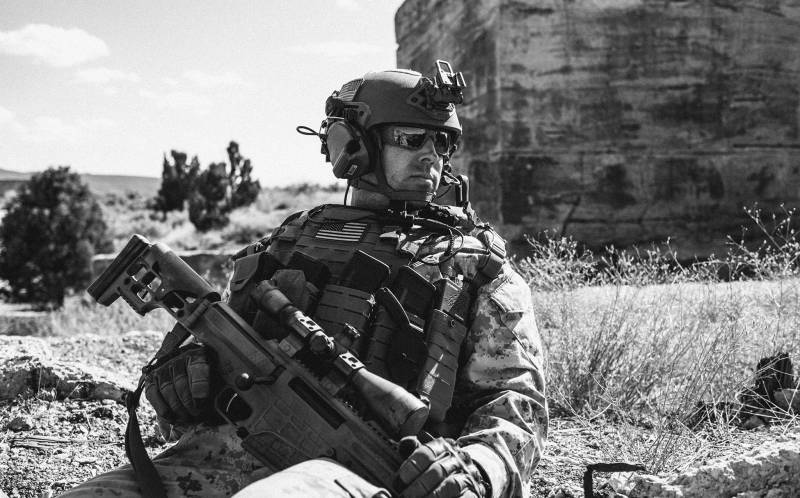 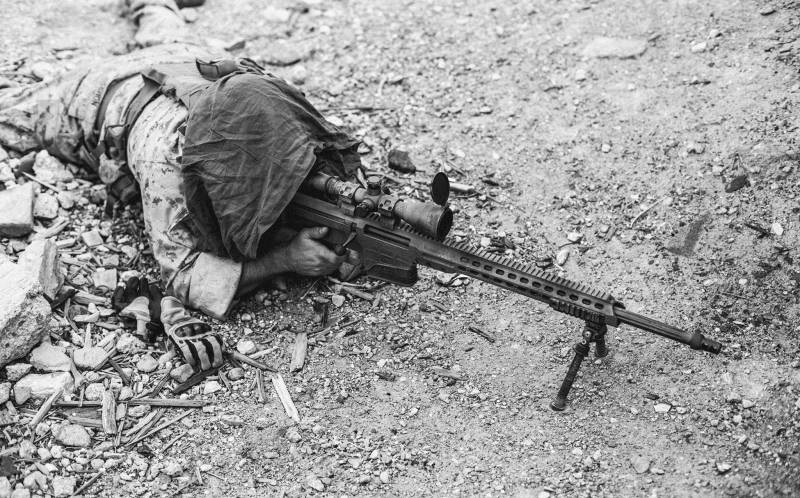 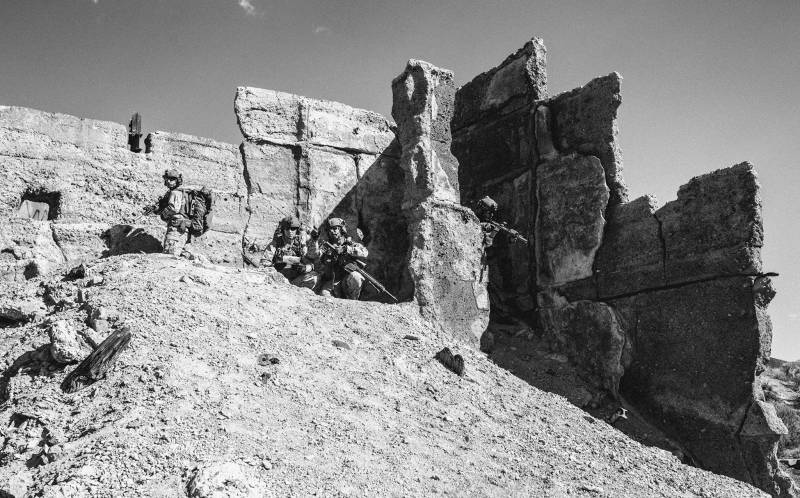 Soldiers with a Mark 22 rifle. All photos by Barrett.

Ctrl Enter
Noticed oshЫbku Highlight text and press. Ctrl + Enter
We are
Sniper fire in local warsWhat should be a modern sniper (part of 1)
88 comments
Information
Dear reader, to leave comments on the publication, you must to register.