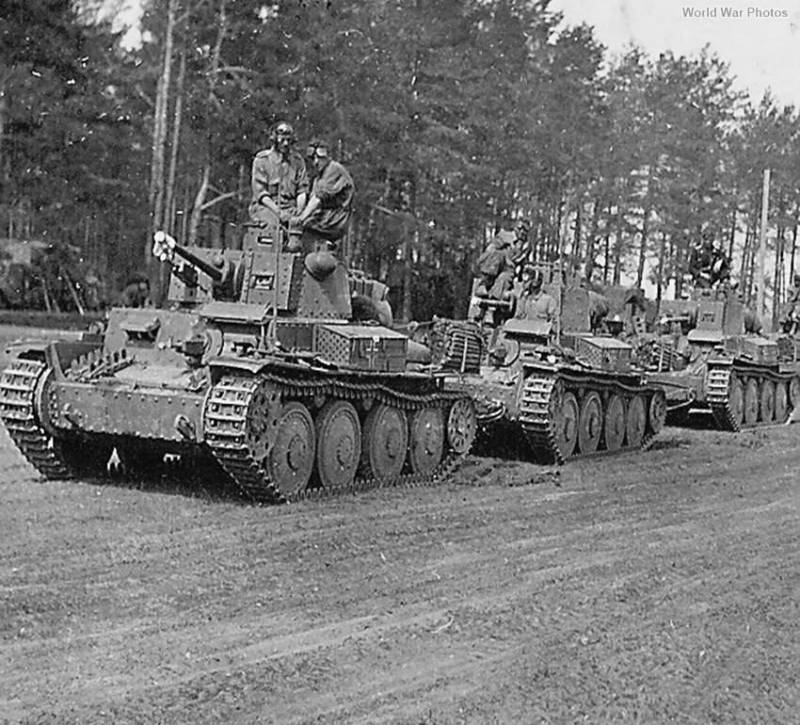 There is a rather strange myth that the German army, after the invasion of the USSR, was not ready for a thaw. Even in the comments under the previous article they began to write about it. Which prompted me to make this review of German documents concerning the possibilities of Russian highways at that time.

Such myths, which are then happily reprinted and equally cordially discussed, are based, in essence, on ignorance and lack of necessary information. Scientific geography, with detailed studies of various countries and territories, the collection of all kinds of statistics, was born in Germany, and German professors then taught these disciplines to Russian students. So that in Germany, during the development of the attack plan, they did not pay attention to the roads and did not collect information about them - this simply could not be. The fact that the Department of Hostile Armies Ost of the General Staff of Germany devoted a lot of time and effort to studying the state of roads on the territory of the USSR, there is documentary evidence.

In the TsAMO RF there is a document that has not been fully preserved (some of the pages and the beginning with the title page have been lost), dedicated to the description of the road network of the European part of the USSR (TsAMO RF, f. 500, op. 12451, d. 257). 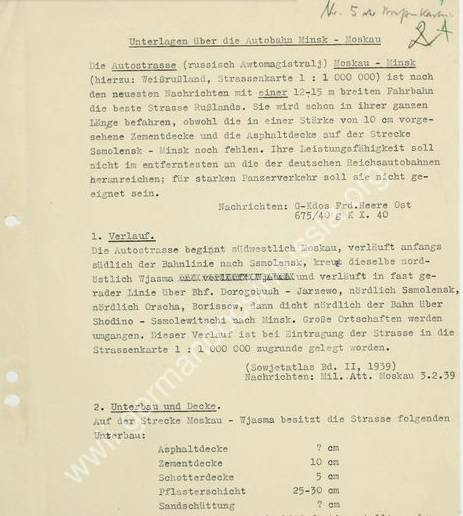 Beginning of the guide describing the Moscow - Minsk highway. On this page you can see a link to a message from the military attaché of the German Embassy in the USSR.
This is something like a reference book, which summarized the various data collected both during the study of maps and atlases, and during the examination of the roads by employees of the German embassy or German intelligence agents. The roads were divided into certain sections and numbered. And more or less detailed information is given for almost every such fragment. Also, data on bridges, road and rail were collected and summarized (the latter could, if necessary, be used to pass tanks).

The reference book, judging by the numbering, contains information on at least 604 highways and 165 bridges of the Soviet Union.

In the surviving part, there are mainly roads of the westernmost part of the USSR: main roads to Moscow, Leningrad and Kiev, as well as local highways and dirt roads of the Baltic States, Western Ukraine and Western Belarus.

Then they “gutted” the document, taking from it the pages that described the roads of the territory on which a specific offensive was supposed, and left unnecessary pages. Apparently, this happened in August 1941.

So far, we have what we have. Even from what we have, you can get an idea of ​​how the Germans carefully and scrupulously studied our highways and what realistic ideas they had about the thaw.

The roads were bad

The main road to the USSR is, of course, motorway Moscow - Minsk... A separate description is devoted to it (TsAMO RF, f. 500, op. 12451, d. 257, l. 1-3). The best road in the USSR. 12-15 meters wide. On the Moscow - Vyazma section, it had the following web structure: asphalt, concrete (10 cm), crushed stone (5 cm), cobblestone (25-30 cm), sand. But she was not all like that. There was no asphalt-concrete pavement on the Smolensk - Minsk section. This led to the conclusion: although the road is slightly inferior in terms of capacity to the German autobahns, nevertheless, it is not suitable for heavy tank traffic. Elsewhere, it is also indicated that the road is possible for the movement of trucks, but for tanks and heavy weapons it is not suitable. 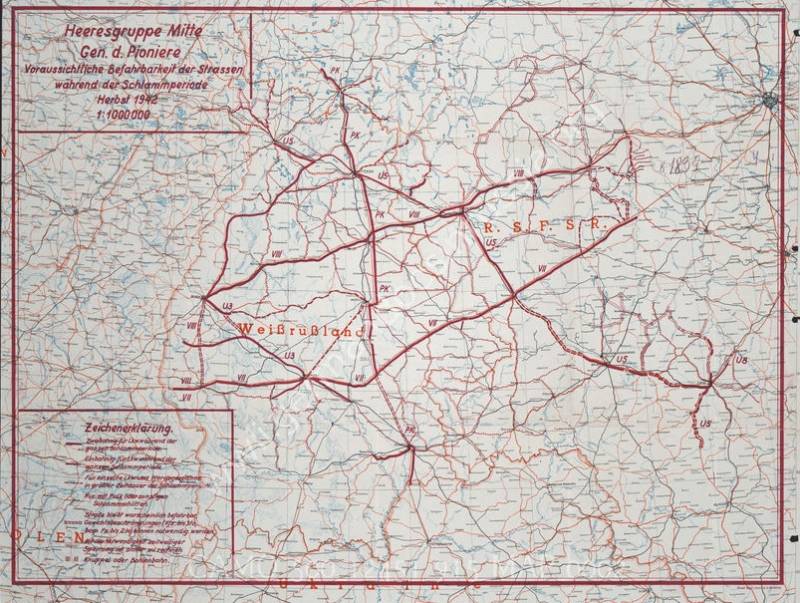 This diagram was drawn up in the fall of 1942, and the categories of roads are indicated on it. The thick solid lines are the road passing for freight transport in any season. Dotted line - passable for individual trucks and carts during most of the thaw season. Points - the ability to pass only with the help of drags or mud sleds (Schlammschlitten). The Moscow - Minsk road is marked (Minsk is located next to the U3 sign). As you can see, the Germans had at their disposal a frame made of year-round transport highways, but the roads between the chords and the entrances to the front were buried in mud. Scheme - TsAMO RF, f. 500, op. 12451, d.915, l. 2.
And at that time it was the best road in the USSR!

Other roads were noticeably worse. For instance, highway Leningrad - Moscow it was, according to German data, asphalt 100 km (obviously from Leningrad). And then it was in a very bad condition. The Leningrad-Kiev highway, which ran through Luga, Ostrov, Nevel, Vitebsk, Mogilev, Gomel and Chernigov, on the contrary, was in good condition.

Postal tract Moscow - Minsk, which passed through cities and villages, in contrast to the Moscow-Minsk highway, was almost along its entire length an improved dirt road and only in places (in cities and towns) was paved with cobblestones.

The road from Minsk to the west, through Smorgon, Vilnius, Kaunas to East Prussia, to Eydkau (until 1938 Eydkunen). The road from the East Prussian border to Kaunas and Janov was good, from Janov to Vilnius it was narrow, but in good condition. From Vilnius to Ashmyana - very good. From Oshmyany to Smorgon (both points in Western Belarus, on the border with Lithuania; until 1939 as part of Poland) there was an improved primer, about which it is directly written (TsAMO RF, f. 500, op. 12451, d. 257, l. 4 ):

"It is difficult to overcome for the troops in the fall."
Received great attention road from Moscow to Warsaw, via Bobruisk, Kobrin and Brest. Good condition according to German estimates. It lists the 11 largest bridges and their current status. Some bridges were under reconstruction and were partially dismantled, such as the bridge over the Ptich River, where one side of the bridge was dismantled and piles were driven under the new bridge.

The road Minsk - Mogilev. It was laid along the old road (slightly away from it) for 200-500 meters, bypassing settlements. From Minsk to Trostenets (about 10 km from Minsk) the road was asphalted and then paved with bricks. Not far from Mogilev, the highway was paved with small cobblestones, and the roadway was also crushed.

And so on. In general (with a few exceptions) the roads were not that good and were mostly dirt roads. Sometimes there were rubble, cobblestone paving. Asphalt was rare and could only be found on major highways. The general rule was that there were good roads only around cities (70-100 km from Moscow and Leningrad, 20-30 km from Minsk or Kiev, and several kilometers from other more or less large cities). Outside this radius, the roads deteriorated sharply and it is good if they became improved dirt roads.

This guide was formed from various information and reports, the latest of which dates from March 1941 (concerning the Moscow-Minsk highway). In other words, road data was constantly being collected, refined and corrected.

In some places, road works were carried out, bridges were built and repaired. But at the same time, the general condition of the road network changed little: more or less passable year-round main roads and a lot of dirt roads, which became difficult to access in autumn and spring.

Slush... One should not think that the concept of thaw is not completely familiar to the Germans. Firstly, somewhere in Brandenburg or Mecklenburg, in Pomerania and East Prussia, in low-lying and sometimes swampy areas, the troops are quite able to beat the dirt road to the state of jelly - no worse than in Ukraine.

Secondly, the state of the roads in the former eastern Poland (this part turned out to be divided: the western half is the territory east of Warsaw; the eastern half is Western Belarus and Western Ukraine, which became part of the USSR) was very poor, which is reflected, for example, on the road map , which were used by Army Group Center to advance their forces to the new border of the USSR. The diagram was drawn up in February 1941. That is, at that time, the German troops already had the opportunity to knead the mud during at least three seasons of thaw, from the fall of 1939 to the fall of 1940. And they also had the spring of 1941 to get acquainted with the peculiarities of our abyss. 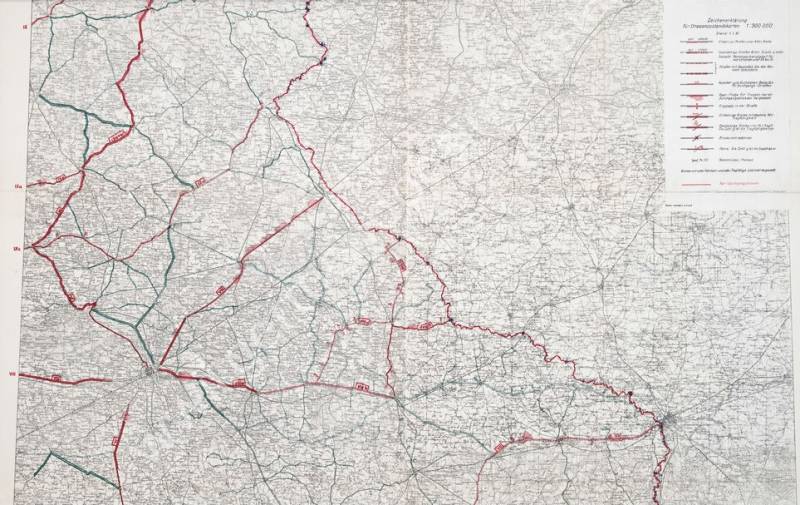 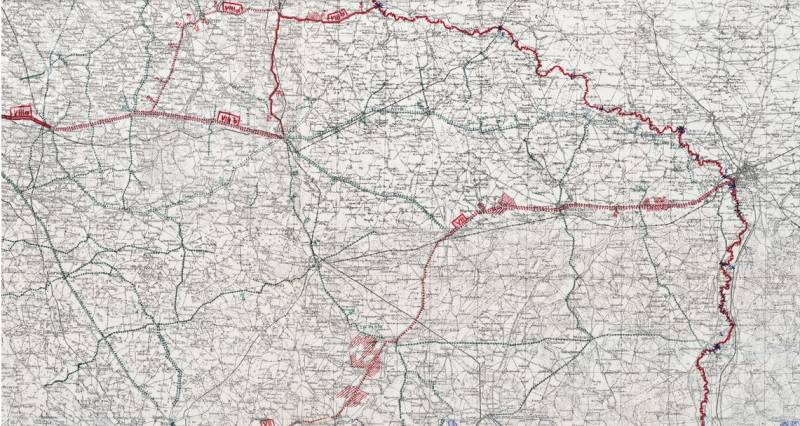 Here is an enlarged portion of the same map: western approaches to Brest. It is easy to see that all the roads in this region were bad. Consequently, the German troops, which from the autumn of 1940 began to accumulate in this area, received practical experience in the local thaw.
Thirdly, the Germans were clearly interested not so much in muddy roads as in the cross-country ability of roads and bridges for tanks, on which many operational and tactical details of the developed operations depended. The collected data showed that our roads were then almost everywhere of little use for the passage of tanks. Not in the sense that tanks, in principle, could not drive through them, but only in the fact that after tanks such a road becomes practically impassable. Almost the only example of a road in this entire German reference book, which was the only one that met the standards for German tanks at that time (TsAMO RF, f. 500, op. 12451, d. 257, l. 8):

The road Grodno - Sopotskin (21 km), 7-8 meters wide, covered with rubble. Note: "suitable for tanks."
Well, the bridges of that time (mostly wooden, with a carrying capacity in the range from 5 to 10 tons), presented an obstacle for German tanks, since they would not bear the weight of even the lightest of those that took part in the invasion of the USSR: Pz.Kpfw. 38 (t) and Pz. Kpfw. II (first 9,8 tons, second 9,5 tons). For heavier vehicles, in any case, it was necessary to direct the crossing, since the Pz.Kpfw IV (weighing from 18,5 to 28,5 tons) could not go everywhere. And in general, it seems that the well-known German classification of tanks by weight was born from similar military road considerations. 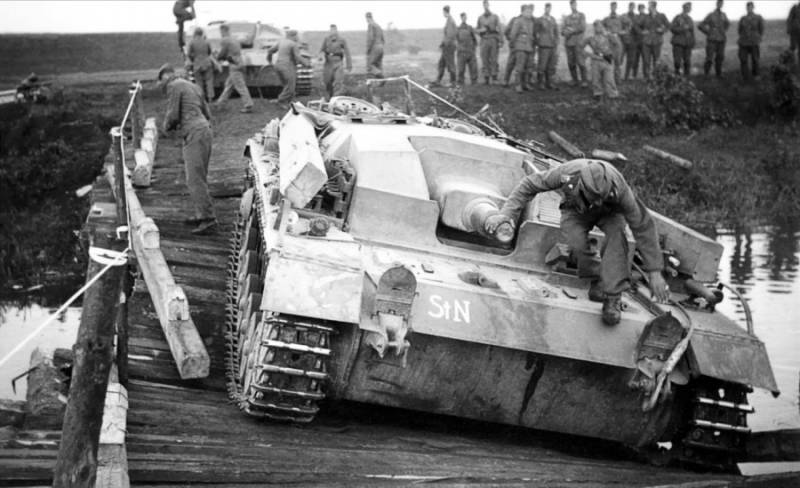 The bridges demanded close attention. They were, of course, driven, even when they raised doubts about their reliability. But this often led to similar incidents. 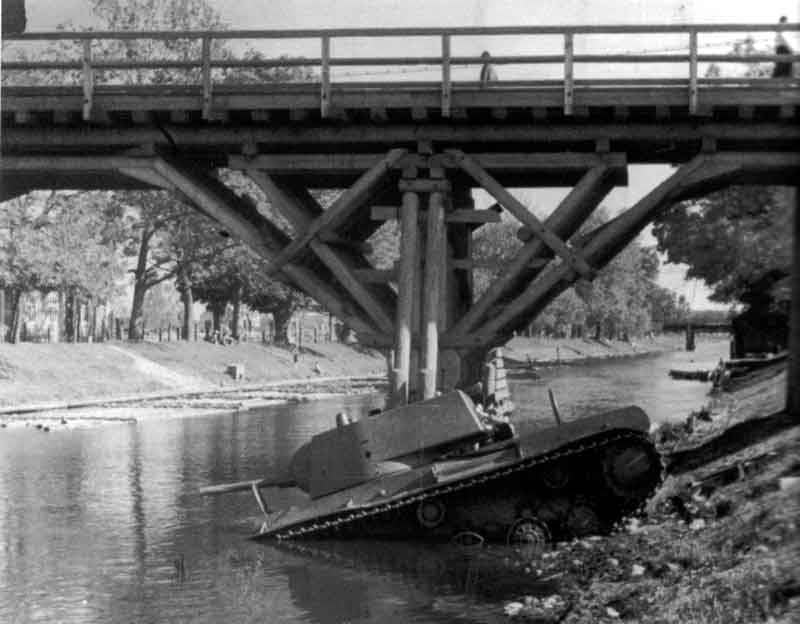 Here is another photo to illustrate the meaning of bridges. The KV-1 did not dare to enter the wooden bridge across the Oginsky Canal in Slonim, but it could not overcome the canal either. Tanks needed either a railway bridge or a suitable floating bridge.
From this, by the way, it followed that the Germans would have to fight in the dry, summer season, when tanks would be able to do without access to major highways, which they should have left for the motorized infantry and supply columns of tank divisions. And the Germans would also have to advance with tanks along the largest and best highways, using them as supply routes.

But the German infantry divisions were originally intended to tinker in the mud. They would have got almost exclusively unpaved field roads, after heavy rain, turning into liquid mud and abyss.

And then it could not be otherwise.

Ctrl Enter
Noticed oshЫbku Highlight text and press. Ctrl + Enter
We are
Chernobyl notebook. Part of 3My grandfather's front-line letters (part 2)
188 comments
Information
Dear reader, to leave comments on the publication, you must to register.