August 14 2012
9
Writing about artillery commanders is especially interesting if only because a certain skinny Corsican artilleryman conquered the whole of Europe. There is something in them besides the praised military prowess, something that allowed giving orders to the servants of the already destructive, but not yet completely reliable weapons, keeping composure and endurance under the whistle of bullets and nuclei, or seeing how cavalry with spears at the ready rushes on the battery at full speed and clearly realizing that a slip is fraught with death, because there will be no second chance to shoot ... Much could have been told by lieutenant-general V S. Kostenetsky ... But alas ...

Vasily Grigorievich Kostenetsky was a unique person even among artillery commanders. Of great growth and remarkable physical strength, he had a thin and sharp mind. Vasily Grigorievich was born in 1769, near the city of Konotop, in a family of small local nobility in Chernihiv. In 1779 he entered the Artillery and Engineer (later Cadet) Corps, and having successfully completed it, was released by the 12 bayonet-gunner on May 1786 of the year with admission to the 2 kanonersky regiment. A year later, Kostenetsky received the first officer's rank, and 1788, for distinguishing himself when participating in his first battle, Ochakov's assault, was awarded the rank of second lieutenant. The next seven years Kostenetsky led in continuous battles in the Crimea - with the Ottomans, the Black Sea and in the Kuban - with the Circassians. The most significant battles in addition to the capture of Ochakov, in which he took part were the storming of Bender and Khadzhibey (today Odessa).

In 1795, Vasily Grigorievich was assigned to the newly formed Black Sea Battalion, where he successfully formed equestrian and foot artillery in the Cossack army. Next year, Kostenetsky was given command of an equestrian artillery company. This type of troops was only being formed, and Vasily Grigorievich personally taught the soldiers to act in marching and combat conditions. Soldiers were trained in the spirit of the Suvorov system - all that could be useful in battle. A cannon servant learned to quickly reload the guns, and if necessary, everyone could replace a comrade who was out of action. The role of the commander of the artillery, which was to support the cavalry in the battle with the closest approach to the enemy, as anyone approached dashing Kostenetsky, who was always enthusiastically involved in hand-to-hand combat. For success in the preparation of his company, Vasily Grigorievich in 1798 received the rank of captain in the year, and two years later in 1800 was transferred to the Life Guards Equestrian artillery. 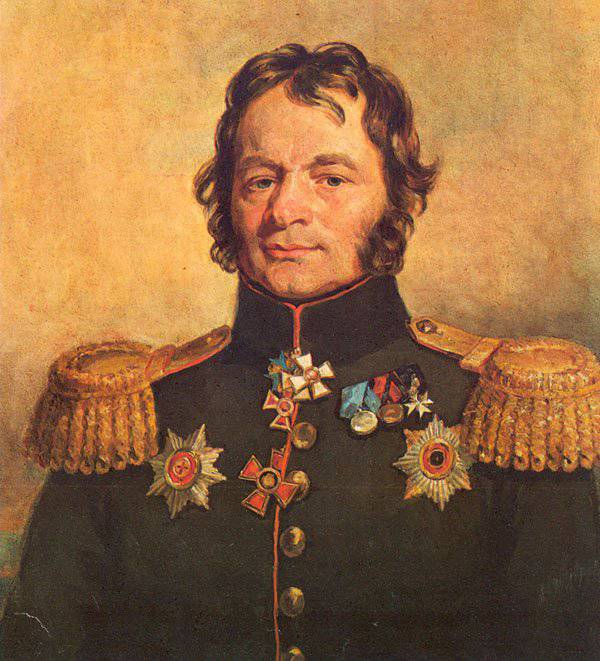 In 1805, in the battle of Austerlitz, the whole accumulated combat experience of the future general appeared to be itself. While commanding the same guards company during the retreat of the allied forces, he managed to save the 4 cannon from the 6 by beating off multiple attempts by the French cavalry to seize the guns. Thanks to the actions of the gunners of Kostenetsky, hundreds of retreating Russian and Austrian soldiers were saved. For his actions at Austerlitz awarded the Order of St.. George 4 class.

In the 1807 campaign of the year, Kostenetsky was, as usual, a brilliant commander. He took part in the battles of Geilsberg and Gutstadt. Under Heilsberg, Kostenetsky’s company managed to get the artillery and the rangers of the French to flee, in addition to the infantry that formed the right flank of the French. Unsuccessful for the Russian-Prussian army was the last battle of the Fourth Coalition - the battle of Friedland. But, as you know, failures reveal talent and demonstrate the will of the commander. In the case of Vasily Grigorievich, this saying is more than fair ... Having stayed with one company on the right flank, he managed to stop the advance of the French, and then in perfect order, without losing a single weapon, he crossed with the entrusted company across the Alle River. At the same time, the detachment was forwarded to wade and Kostenetsky, standing up to the waist in the water, personally helped with the tools. For courageous and skillful actions, he was presented to the Order of St.. Vladimir 3 degree, and the differences in the entire campaign, Vasily Grigorievich received the rank of major general.

After the signing of the Peace of Tilsit and the annexation of Russia to the continental blockade, Kostenetsky was sent to protect the coast from the British in the area from Oranienbaum to Narva.

At the beginning of 1811, Vasily Grigorievich leaves the command of the Guards Company and leads the 2 and 4 reserve artillery brigades. Just before Napoleon's invasion, he was transferred by the artillery commander of the entire 6 Infantry Corps of General D.S. Dokhturov. Kostenetsky took part in many rearguard battles before the unification of the 1 and 2 armies.

In the first major battle near Smolensk, according to contemporaries, Vasily Grigorievich was the right hand corps commander. For his brilliant performances and bravery, he was awarded the Order of St.. Anna 1 degree. 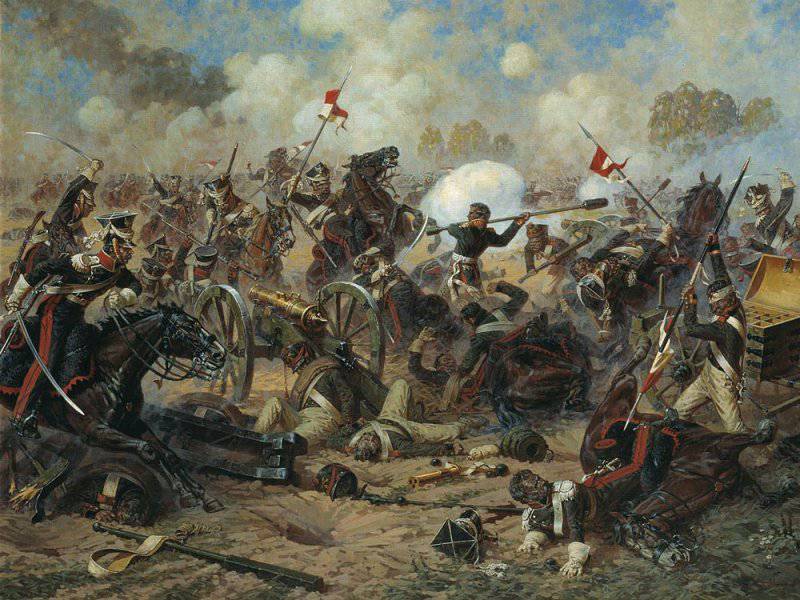 Averyanov A.Yu. - The feat of General Kostenetsky in the battle of Borodino, 1993,

Under Borodino, an episode took place with the participation of Kostenetsky, who was probably remembered not only by the Russians, but by the French, although the latter are unlikely to advertise him ... During the detour of the central positions, Vasily Grigorievich saw how one of the batteries broke into Polish lancers. Without delay, the major-general rushed to the aid of the cannon servant, armed with a bannik (pole for cleaning the barrel). The first ulan got off the horse, receiving a mighty blow. Kostenetsky threw himself into the midst of the horsemen, knocking them down from the horses one by one. The bannik could not stand for a long time, and was probably broken about someone's unlucky Polish head. But by that moment, the gunners, inspired by the example of the commander, sat on completely discouraged cavalrymen and in a few minutes cleared the battery. So, in the hands of Kostenetsky, the metaphorical “club of popular war” acquired the completely material form of a wooden bannik and completely non-metaphorically filled Napoleon's satellites ...

Kutuzov knew and appreciated Vasily Grigorievich and therefore, after the death of Count Kutaisov, it was Kostenetsky who headed the entire Russian artillery. For the battle of Borodino, Vasily Grigorievich received the order of St. George 3 degree.

Later, already in the Tarutinsky camp, Kostenetsky proved himself as a strategist. It is known that he gave the commander-in-chief a note about the need to force the Great Army to retreat along the Old Smolensk Road. It is unlikely that the commander in chief has not thought through this option before the letter, but the fact itself is indicative.

At the final stage of the 1812 campaign, Kostenetskii’s excellent organizational skills emerged. Not only the French, but also the Russian army suffered from severe frosts and lack of food, although to a much lesser extent. The lack of forage led to the loss of horses and reduced mobility of artillery. Vasily Grigorievich was able to maintain order in his subordinate units as far as possible. Thanks to this, in the battle of Tarutino, then during the Maloyaroslavets and in the battle near the village of Krasnoye, the Russian army had a significant superiority in artillery.

In the 1813-1814 Overseas Campaign, Kostenetsky commanded the 4 and 7 artillery of the Guards Corps, part of the FF unit. Wintzingerode, which was the left wing of the 1 Army. Vasily Grigorievich participated in all major campaign battles. From Kalisz to Leipzig on 1813 and from Strasbourg to Paris on 1814. And in a foreign land Vasily Grigorievich remained true to himself, not tired of surprising not only with military, but also with administrative talents. For example, near Dresden, Kostenetsky’s scrupulousness helped the Russian and allied artillery to win the “confrontation” off-road, thereby securing more 150 guns.

After the defeat of Napoleon, Vasily Grigorievich was appointed to command the guns of the 5 corps, which in 1815 year again made a campaign in France.
From 1817, Kostenetsky was the chief of artillery of the 4 Corps. Two years later, due to disagreements with Prince Yashvil, who at that time headed the artillery of the whole army, a combat general with great experience Vasily Grigorievich Kostenetsky, who was used to make real soldiers out of ordinary soldiers, and did not sculpt parade toys from them, was not his destiny. After leaving the service, he settled in his estate. In 1820, he was again “enlisted by artillery”, but he did not receive a specific position.

Kostenetsky met the uprising of the Decembrists negatively and was always with the uncrowned Nicholas. Probably only by accidentally reminding himself in this way, 1826 was promoted to lieutenant general.

In the 1831 year, having gone to help the province where a cholera epidemic was raging, Kostenetsky contracted the disease and in June of the same year the fearless general was gone.

Unfortunately, the origin at that time occupied a very important place in awarding for a particular cause. Vasily Grigorievich did not come from a noble family, because of this, more than deserved rewards were often avoided by him. And Kostenetsky, who was not particularly eager for external paraphernalia, didn’t remind himself of his superiors.