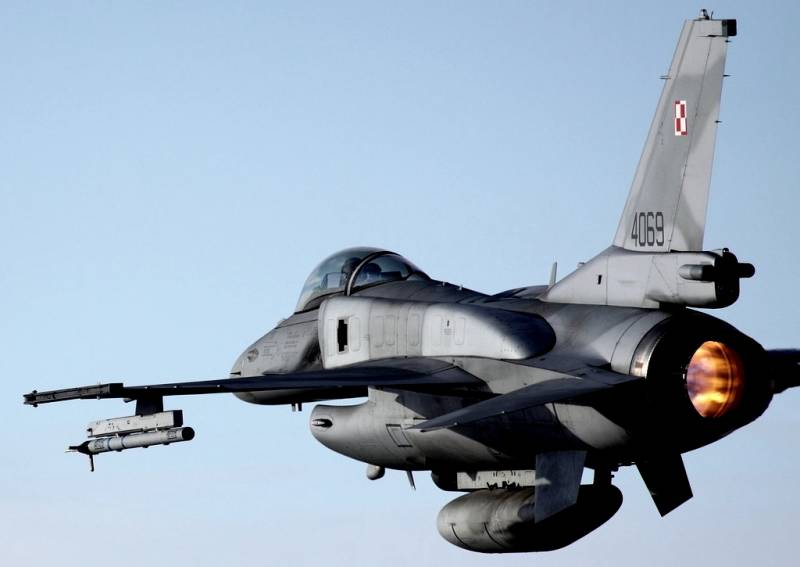 As you know, literally a week and a half earlier, Jay Annis, Director of the Northrop Grumman Armamment System Division / NG-ASD, made a very bold recommendatory statement addressed to the defense department and the Polish Air Force command within the in Warsaw a conference on military-technical cooperation. In his speech, a high-ranking representative of one of the leading military-industrial giants of the United States in a very original way tried to push the representatives of the Ministry of National Defense of Poland (MON) who participated in the conference to conclude a multimillion-dollar contract for the supply of several dozen long-range anti-radar missiles AGM-88E AARGM to the Polish Air Force. for further integration into the ammunition load of two air wings of the F-16C / D Block 52+ multipurpose fighters in the amount of 48 vehicles.

As the main argument in favor of the purchase by the Polish side of the "Northrop" deeply improved HARM family of radars, Mr. Annis called the ability of these means of high-precision weapons “To overcome the echeloned anti-missile barrier of the Kaliningrad zone of restriction and prohibition of access and maneuver A2 / AD with tactically verified use from the hardpoints of the Polish F-16C / D Block 52+”.

Meanwhile, despite all the solidity of the post occupied by Jay Annis in Northrop Grumman, which assumes a detailed awareness of the competent person both about the technological advantages and disadvantages of his own company products, and about the technical parameters of the potential adversary's weapon systems, the above statement of the director of NG-ASD has an extremely little in common with an objective assessment of the operational-tactical and tactical-technical features of the use of anti-radar missiles AARGM against the most powerful mixed anti-aircraft missile group, which is at the disposal of the 183rd and 1543rd anti-aircraft missile regiments of the 44th Air Defense Division of the Baltic fleet The Russian Navy, the command and staff infrastructure of which is deployed in Gvardeisk (Kaliningrad region).

In particular, the aforementioned combat units are armed with the following air / missile defense systems:

- and finally, several batteries of military self-propelled air defense systems "Tor-M2U" and anti-aircraft missile and artillery systems "Pantsir-S1", covering the "dead zones" (distances from the positions of divisions to the near borders of the affected zones) of all the above modifications of the long-range "Three hundred".

The total target channel of illumination and guidance radars of the above-described mixed anti-aircraft missile group stationed in the Kaliningrad region is more than 110-120 simultaneously processed enemy aerospace attack weapons, which include the anti-radar "brainchild" of the Northrop Grumman corporation promoted by Jay Annis ... Therefore, it is quite logical to assume that even the hypothetical use of the entire fleet of F-16C / D Block 52 multifunctional fighters equipped with 192 AGM-88E anti-radar missiles will not allow the Polish Air Force command to achieve the expected result in eliminating the key A2 / AD air defense zone of the Russian Armed Forces on Baltic theater.

Based on the fact that 200-mm antenna arrays of active-passive radar seeker WGU-48 / B increase the effective reflective surface of AARGM anti-radar missiles to 0,1 sq. m (similar objects are captured by 92Н6Е and 9С32М4 illumination radars for "precise auto tracking" at a distance of 120-150 km), and their flight speed on the marching leg of the trajectory barely reaches 2 km / h, it is not difficult to come to the conclusion that up to the moment two hundred AGM-350E missile launchers reach the terminal section of the trajectory (to the target area), the attacked anti-aircraft missile battalions S-88V300, S-4PS300 and S-1 "Triumph" will have time to fire on the attacking "alongside" about three volleys from 400-200 long-range anti-aircraft missiles 234M9M, 82M9M, 83N48E6 and 2N48DM, which will be quite enough to neutralize 6-85% of the attacking "squad". After all, it is well known that AGM-90E AARGM 2,2-fly anti-radar missiles do not have the ability to carry out intense anti-aircraft maneuvers with overloads of 88-20 G, therefore, they will turn into the simplest targets for the above list of missile interceptors. The single AGM-30E, which broke through into the 2-6-kilometer “dead zones”, “Three hundred”, will be safely intercepted by the 88M9 / 331 and 338E57 short-range missiles launched from the transport and launch modules of the Tor-M6U air defense missile system and the Pantsir-C2 air defense missile system. ...

Moreover, in order to avoid hasty erroneous conclusions and further biased statements, Mr. Annis would not hurt to take into account the fact that unique ultra-long-range missiles 300М4МВ were integrated into the ammunition of the newest military air defense systems S-9В82, capable of intercepting not only AGM flying along a flat trajectory -88E, but also the multifunctional fighters F-16C / D Block 52+ that are their carriers, reaching the low-altitude launch lines of AARGM missiles (they are only 100-120 km due to the consumption of most of the solid fuel charge to overcome dense layers of the troposphere), in the mode enveloping the terrain, outside the radar view sectors of the illumination of the attacked air defense missile systems (behind the "screen" of the radio horizon).

A similar ability of the 9M82MV anti-aircraft missiles (as well as the 9M96DM missiles, which in the foreseeable future can supplement the S-400 air defense missile systems) is achieved due to the presence in the element bases of their guidance systems of the newest active radar seeker of the Slate line from the Moscow Research Institute Agat. The latter do not need regular illumination from the side of battery-operated illumination / guidance radars and can receive target designation from third-party radar and radio-technical reconnaissance equipment, including A-50U AWACS aircraft, airborne radars of tactical aircraft aviation Aerospace Forces of Russia, as well as radar systems and RTR stations of ship and ground based, which is ensured by equipping the inertial navigation modules of the above missiles with transmitting and receiving terminals of a two-way asynchronous data exchange line. Consequently, even in a complex jammer, the S-300V4 air defense system (and in the future the S-400 Triumph) will be able to destroy the F-16C / D Block 52+ of the Polish Air Force outside the radio horizon and before reaching the launch line of the vaunted AGM anti-radar missiles -88E AARGM.

Ctrl Enter
Noticed oshЫbku Highlight text and press. Ctrl + Enter
We are
Will C-400 cope with the super-maneuverable version of HARM? Starting from a ground-based PU is not a problem for it.AARGM (AGM-88E) air defense breakthrough weapon
153 comments
Information
Dear reader, to leave comments on the publication, you must to register.