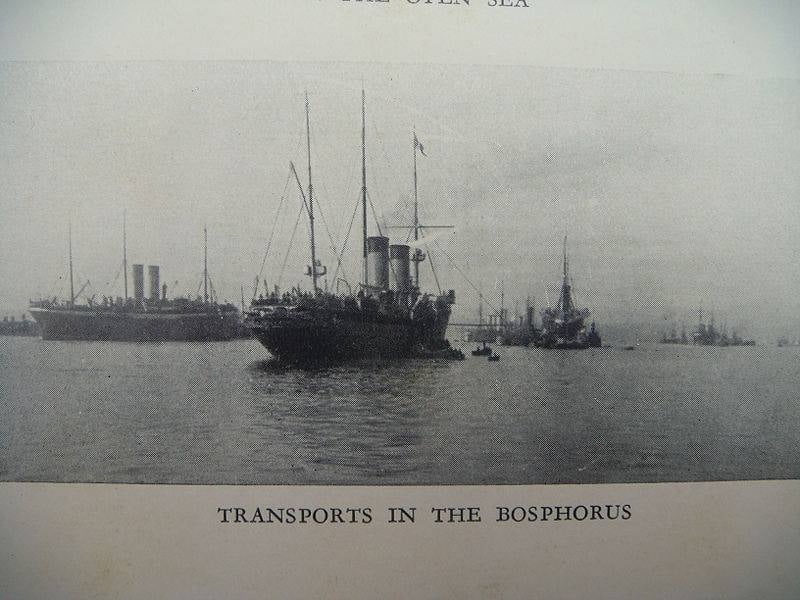 White fleet off the Bosphorus

The fall of the white Crimea

In the course of stubborn battles on November 7-11, 1920, the Red Army broke the resistance of the Wrangelites in the Perekop and Chongar directions. The commander-in-chief of the Russian army, Wrangel, decided to evacuate troops from the Crimean peninsula. On November 12, the remnants of the White troops began a hasty retreat to the coast, to the ports. The remnants of the 1st and 2nd Army, Cavalry Corps retreated to Simferopol, then to Sevastopol and Yalta. The 3rd corps, the Donets and the Kubans, the reserve 15th division went to the Kerch Peninsula, Feodosia and Kerch. Their retreat was covered by armored trains, which with machine-gun and artillery fire threw back the leading Red units.

In the battles with the Red Army in Crimea, white armored trains distinguished themselves: "St. George the Victorious", "Dmitry Donskoy", "United Russia", "Officer" (was surrounded and died in battle) and "John Kalita". "Georgy" and "United Russia" reached Sevastopol, where their crews were put on ships. Heavy armored trains "Ioann Kalita" and "Dmitry Donskoy" covered the withdrawal of the remnants of the Don corps, so their crews were taken out of Kerch.

The civilian population of the white Crimea was in a state of ignorance until the last day. In order not to create panic and not to strengthen the position of the Crimean partisans, Wrangel, immediately after the fall of Northern Tavria on November 4, spoke to the press, where he kept silent about the negative consequences of the retreat of the White Army. To say only that the withdrawal of the army was organized and with minor losses. Although in reality the white corps in Tavria fell into the "cauldron" and broke through with heavy battles, losing half of their composition.

Wrangel assured that the Crimean "besieged fortress" would hold out, and then the White Army would go on the offensive again. That the West, which is also threatened by Bolshevism, should help. A similar message was made by the army headquarters.

This became the basis for a new wave of jingoistic patriotic campaign. Myths spread about the "Perekop fortress", which would lay down the best regiments of the Red Army. They say that there are even too many white troops to defend the isthmuses.

Although, as previously noted (How the Red Army broke through to the peninsula), the preliminary preparation of the defense of the Perekop and Chongar directions was carried out very badly. In fact, there was no long-term defense in depth.

Basically - field positions, often poorly and insufficiently prepared. The best units (the Drozdovites, the Kornilovites, etc.) were exhausted and drained of blood by previous battles. Heavy artillery was scarce. Many parts were demoralized and broken.

The Red Army had a significant (not only quantitative, but also qualitative) superiority. The white command, obviously confident that the Crimea would no longer need to be defended, did not use a rather long period of time to create powerful fortifications on the isthmuses.

Wrangel missed the available opportunities for the total mobilization of forces and means in the Crimea, including the arsenals in Sevastopol, ship guns, the entire potential of the white fleet.

Wrangel's headquarters, although it had some information about the power of Frunze's southern front, underestimated the enemy. The white command believed that defeat was possible, but not as quickly as it turned out in reality. Therefore, Crimea lived quietly for several days. Only the most far-sighted gathered things and looked for places on the steamers.

The disaster at the front on November 8-11 was like a bolt from the blue for many. On November 10, at a meeting between Wrangel and Defense Chief Kutepov, it was decided to start evacuating the rear. For this, requisition of all private ships in ports was carried out. They began to load hospitals and central institutions. The white government applied to France for asylum.

On November 11, 1920, when the last defense lines were crumbling, Wrangel ordered the evacuation of the families of the military, civilian officials, individuals - everyone who could not stay on the peninsula. The evacuation plan was already in place. Ships and vessels were distributed among units, government and logistic institutions, families of military personnel and civil servants. The ships that remained after the distribution were intended for civilians who wanted to leave Crimea.

The White Army, by a strange coincidence, was lucky. The Red Army stopped for one day. White managed to break away by 1-2 transitions. Only a day later did Soviet troops begin pursuit.

The southern front advanced in two groups. The first group: the 6th army, the 2nd and 1st Cavalry armies - to Evpatoria, Simferopol, Sevastopol and Yalta. The second group: the 4th army and the 3rd cavalry corps - to Feodosia and Kerch. On November 13, the Reds were in Simferopol, on the 14th - in Evpatoria and Feodosia, on the 15th - in Sevastopol, on the 16th - 17th - in Kerch and Yalta. The cities were occupied without a fight.

However, dozens of stokers of this cruiser refused to leave Sevastopol and went ashore. Therefore, only half of the boilers were started up, and the crossing of the sea was difficult.

An entire armada left Crimea: 1 battleship (General Alekseev - former Alexander the Third), 1 old battleship (George the Victorious), 2 cruisers, 10 destroyers, 12 minesweepers, 4 submarines, more than 120 transport and auxiliary vessels. They took out over 145 thousand people (not counting the crew members). Of these, more than 100 thousand were related to the army, and the rest were civilians.

There are other data on the number of evacuees. In them, the numbers are slightly different.

It should be noted that the Crimean evacuation, in contrast to the Odessa and Novorossiysk, went quite calmly, orderly and without any special incidents. Order was maintained by military units, which had extraordinary powers to eliminate any disturbance.

There was no military pressure from the Red Army. Units and civilians were loaded without fear that they would be captured at any moment. A large number of ships and vessels also contributed to the order. Were mobilized: the entire military and merchant fleet, as well as all watercraft that could cross the sea on their own or in tow. Also, some of the people were loaded onto foreign ships - French, British, etc. It is clear that they could not take everyone (civilians).

The white command did not start pogroms: to destroy all property, equipment and warehouses. All the material resources of the White Army were transferred under the protection of the trade unions.

Although in some places the city "bottom" still arranged devastation. 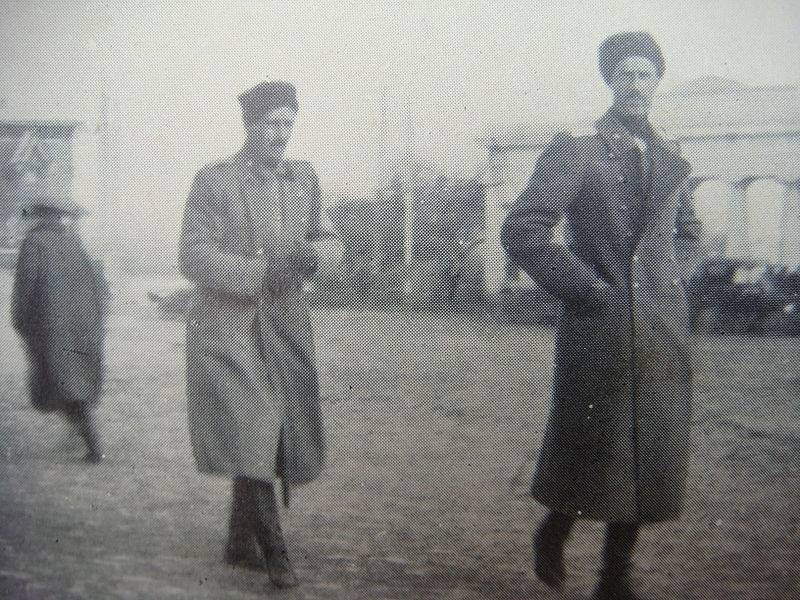 Delivery of the French fleet

On November 11, the flagship of the French squadron in the Black Sea, the heavy cruiser Waldeck-Rousseau (Le croiseur cuirassé Waldeck-Rousseau), arrived in Sevastopol from Constantinople. Rear Admiral Charles Henri Dumesnil was on board. He negotiated with Wrangel. The Baron offered France his entire military and merchant fleet in exchange for the evacuation of his army.

On November 15, Wrangel visited Yalta, where the commander-in-chief checked the progress of the evacuation. Then to Kerch, where the Donets and Kubans were loaded. On the morning of November 17, the flagship of the White Fleet headed for the Bosphorus.

The trip was difficult. The ships were jammed. For example, on the destroyer "Grozny" with a crew of 75, there were over 1 people on board. Many overloaded ships barely crawled, there was not enough water and food.

But on the whole, the evacuation was successful: only one ship went missing - the destroyer Zhivoi (257 people were killed, mainly from the Don regiment). Another team of one minesweeper took the ship back to Sevastopol.

After arriving in Constantinople, negotiations began on the future of the army with the French occupation authorities. Most of the civilians joined the ranks of the white emigration. Some settled in Constantinople, others went to Greece, Serbia, France, scattered around the world.

Wrangel's army (hoping for its use against Soviet Russia) tried to save. The Baron and his associates believed that soon a European great power (or a group of countries) would start a war with Russia. This is what the White emigres were preparing for.

The army was stationed in a camp on the Turkish peninsula in Gallipoli (Turkey) - mainly from the 1st corps of Kutepov. In addition, troops were stationed on the Greek island of Lemnos, Greece, as well as in Serbia and Bulgaria.

The headquarters of the commander-in-chief remained in Constantinople. The fleet, reorganized into the Russian squadron, was transferred by the French to the Tunisian Bizerte (Bizerte, Tunisia).

The vast majority of merchant and auxiliary vessels (over 100 pennants) were sold by the baron to private owners.

The teams were placed in camps where they lived in poverty.

The remaining ships were sold for metal after a few years, as well as all the remaining heavy weapons. 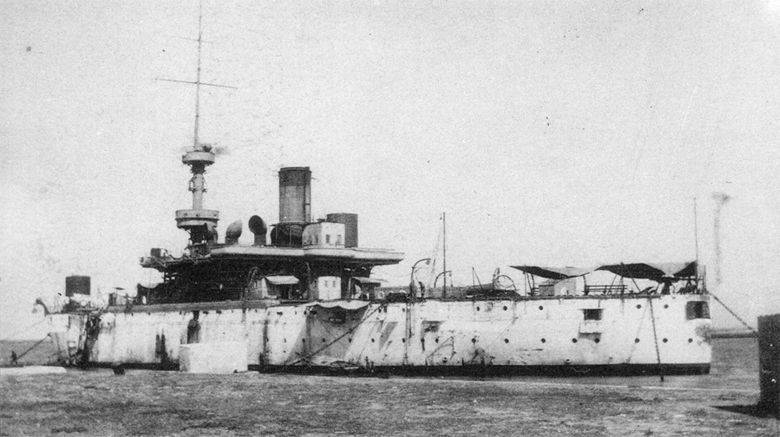 Author:
Alexander Samsonov
Photos used:
https://ru.wikipedia.org/
Articles from this series:
Smoot. 1920 year
Battle for Crimea. How the Red Army broke through to the peninsula
Frunze against Wrangel. The retreat of the White Guards from Tavria to the Crimea
Battle of Rostov
The disaster of white Odessa
How Slashchev Crimea defended
Dono-Manych battle
The death of the Northern Army Miller
Why Western agent Kolchak is turned into a hero and martyr of Russia
The defeat of the army of Denikin in the battle of Tikhorets
How did the Ice Siberian campaign end
The fall of the White Kuban
Agony of White Novorossiysk
The death of the Kuban army
Denikin's resignation
Far Eastern Republic and the Japanese threat
Polish "liberation" campaign in Kiev
Baku “Blitzkrieg” of the Red Army
The battle for Belarus. May operation of the Red Army
War of the Russian Army Wrangel
The first victories of the Wrangel army
The defeat of the 13th Soviet Army in Northern Tavria
Our Kiev!
The battle for Rivne. How Budyonnovtsy smashed the Polish defense
Minsk is ours! The defeat of the Polish army in Belarus
Battle for Lviv. The failure of the Red Army in Galicia
The death of the cavalry group Rednecks
The fierce battle for the Kakhovsky bridgehead
The defeat of the landing group Ulagaya
"Miracle on the Vistula"
How Tukhachevsky destroyed his armies on the Vistula
Battle of Komarov. Defeat of the 1st Cavalry Army
Bukhara Blitzkrieg Frunze
"The danger of Wrangel is becoming enormous ..."
Battle on the Lower Dnieper
The last offensive of the Russian army
Battle of the Neman
Defeat of Tukhachevsky on the Neman
The defeat of the 3rd Soviet army in Belarus
The defeat of the Red Army on the Shara
How Turkey attacked Armenia
Armenian defeat. How the Turkish army captured Kars and Alexandropol
The defeat of Wrangel's army in the battle on the Dnieper
Defeat of the Far Eastern Army. How the "Chita plug" was eliminated