Japanese professor named "guilty" for the loss of the Kuril Islands 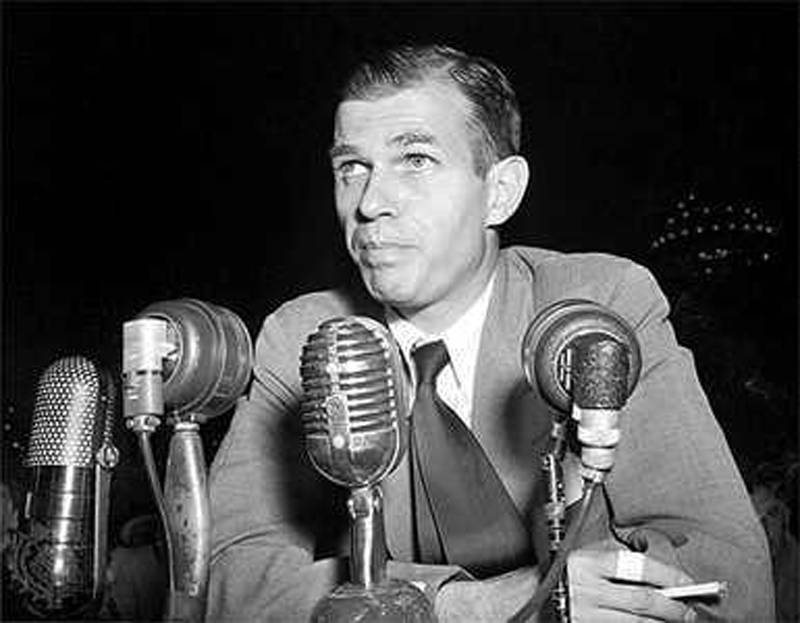 In Japan, which is experiencing real “phantom pains” over the Kuril Islands, the search continues for the “culprits” that these territories, which there stubbornly continue to consider as their own, ended up in the hands of the USSR and subsequently Russia. Well, we can congratulate the enthusiasts there - judging by the publications in some media, they have had a real "breakthrough". Another question - what does this give Tokyo in the territorial dispute, in which Moscow clearly does not intend to concede?


As it became known, a professor at Waseda University Yuma Chefu told the world about some "declassified data of the Second World War", which he was able to get acquainted with in the framework of his research. According to such, the villain who deprived Japan of the happiness of possessing at least two of the four islands of the Kuril ridge is Alger Hiss, who in 1945 was an adviser to US President Theodore Roosevelt. It was he, according to the Japanese professor, "who deceived the head of the United States and transferred the territory of Japan to the Soviet Union."

According to the scientist, Hiss, who joined the US State Department in 1936 and by 1944 made a career there to become the director of one of the most important bureaus, in February 1945 personally accompanied President Roosevelt as an adviser to the famous Yalta conference. However, according to Chefu, at this meeting of the leaders of the USSR, the USA and Great Britain, a high-ranking State Department official acted as “Stalin's agent”. At the same time, he not only conveyed the most important information to the Soviet leader, but also lobbied the interests of the Soviet Union before his own patron.

As a result, as the Japanese researcher complains, the Soviet side "gained the upper hand in all issues in Yalta," including the transfer of the Kuriles to our country, as well as the observance of its interests in China, to the detriment of the "Chiang Kai-shek government." At the same time, referring to incomprehensible "documents" (exact sources are not indicated in any publication on this topic), the professor is trying to prove that the American "top" supposedly had an "alternative" opinion about the fate of the islands - the Soviet Union, in accordance with only the Northern Kuriles were to be withdrawn from them, and the Southern Kurils were to remain with Japan.

The culprit of the fact that this "proposal" was not even studied by Roosevelt, Chefu persistently names Hiss, who, according to his version, ultimately convinced the president "to give the Russians all the islands entirely." At the same time, those circumstances are mentioned on the basis of which the Japanese scientist, in fact, builds his own sensational hypotheses. We are talking about accusations of the "communist past" and even "espionage in favor of the USSR", which at one time were officially put forward against Alger Hiss in the United States.

"Evidence", I must say, is very shaky. Yes, in 1948, a former member of the American Communist Party, Whittaker Chambers, spoke out against this gentleman with a whole heap of "revelations" - he was not only a communist himself, but also a "Russian spy". Hiss flatly denied all charges and even sued for libel. The proceedings dragged on until 1950, when a high-ranking official, who stubbornly did not want to admit his guilt, was nevertheless brought to justice, but not for espionage, but for alleged "perjury". Hiss didn’t even serve his five-year term, and when he was released, he continued to repeat his own innocence until his death.

At present, according to the testimony of authoritative American researchers, there is neither solid evidence that he was an agent of the USSR, nor data that unequivocally refute this statement. And if we consider that the trial over Hiss took place at the time of the most terrible revelry of "McCarthyism", to this day called in the United States itself a "witch hunt" and was the peak of the celebration in the country of anti-communist and Russophobic forces, then, accordingly, the credibility of the charges raises very serious doubts. But the Japanese scientist designates Khissa as the culprit for the loss of the Kuril Islands.

Be that as it may, but either a professor from a Japanese university knows something about this more than the Americans themselves, or this pundit simply displays an increased emotionality, which is usually unusual for his compatriots. To put it more frankly, he begins to fantasize, succumbing to the temptation to find "evidence" that the Soviet Union allegedly received the Kuril Islands "incorrectly" or as a result of some unworthy intrigue. The paper will endure everything ...

What can I say? Even if we assume that Hiss really acted in the interests of the Soviet Union, then this should be considered only another example of the brilliant work of Stalin's intelligence and diplomacy. And the question of the territorial affiliation of the Kuril Islands has long been closed.

Ctrl Enter
Noticed oshЫbku Highlight text and press. Ctrl + Enter
We are
A great interview with Sergey Lavrov: about Ukraine, Obama and IranWhat you didn't want to know about England
51 comment
Information
Dear reader, to leave comments on the publication, you must to register.