August 15 2012
7
The idea of ​​creating a new anti-tank gun belongs to the engineer G. Donner. A feature of the new gun is the location of the barrel in terms of the wheel travel. This gave the gun excellent stability in the production of the shot and a rather low silhouette, which achieved minimal conspicuity on the battlefield. The beginning of the project development is the spring of 1942. The work supervisor is engineer E. Fabricius. New tool give the name PstK 57 / 76.

The first tests of a prototype of a new anti-tank gun begin in the middle of the 1943 year. By the end of the year, the main work on the prototype had come to an end, they began to plan the serial production of the gun in the number of 200 copies. However, the military refused 57mm guns and demanded a gun caliber 75mm. The reason for this decision was the German anti-tank gun caliber 75mm (75 K / 40), which was purchased from Germany and taken into service. For the unification of guns on ammunition and it was necessary to gun precisely the caliber 75mm. 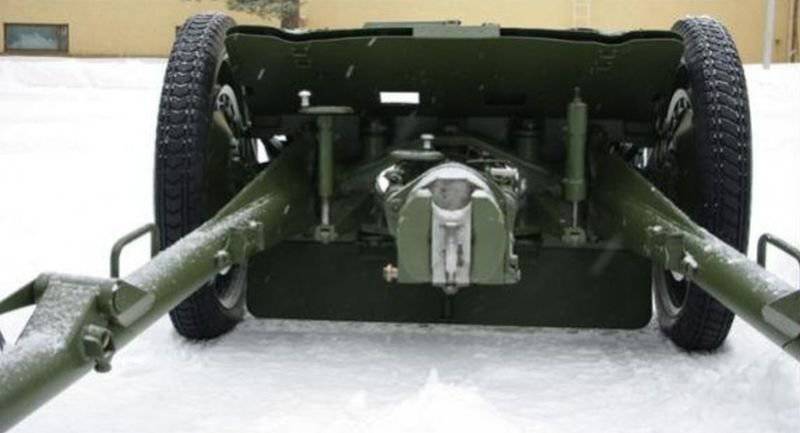 Within a few months, the design of the anti-tank gun was modified and approved for construction. The new gun caliber 75mm gets the working name "75 K / 44". The Finnish Defense Ministry even issued an order for a series of 150 copies.

75 K / 44 equipped with a muzzle brake of its own design, semi-automatic type shutter and enhanced protection (dual shield). Combat weight 75 K / 44 did not exceed one and a half tons, transportation was carried out by analogy with the German "PAK-40", the weight of both guns is almost the same. Finnish designers also created a new sub-caliber ammunition for the new gun instead of the German Pzgr.40, but they could not be mass-produced - the tungsten cores used in the sub-caliber ammunition failed to be produced by the Finns.

Tests of a converted anti-tank guns under a larger caliber began in the first days of the spring 1943 year. In the course of testing, major problems were identified with the reliability of the gun. By the summer of 1944, work began on the creation of the gun in an intensified mode - at this time the Soviet troops launched a major offensive in Karelia to remove the threats of Leningrad and withdraw Finland from the war.

The following tests take place at the end of July 1944. The prototype showed the best armor penetration, but it was not possible to solve the problems with its reliability. The military urgently demanded a result, for which it was required to make changes to the design of the anti-tank gun itself. Another factor was the low profile of the gun - he was not completely satisfied with the Finnish venals, as difficulties with rough terrain were discovered (perhaps because of uneven terrain, the gun was poorly adapted to shoot at direct fire or the gun behaved unpredictably during transportation).

Finnish engineers could not bring the gun to mind - in September Finland signed a peace treaty with the USSR. After that, the creation of the gun began to cause strong doubts among the military - 75 K / 44 did not show advantages over the German "PAK-40". Efficiency against the latest designs tanks at that time was also in doubt.

Under the signed armistice agreements, the gun became part of the weapons and equipment transferred to the Soviet Union. However, 75 K / 44 did not interest the Soviet military and designers, and returned the gun to the Finns. The development of the guns was progressing at a slow pace; it is known that in the 50s it was slightly improved. Of the main innovations, it is worth noting the replacement of the knurler - instead of the spring one, the hydropneumatic one is installed.

The fate of the gun 75 K / 44
In the mid-50s, the Finnish anti-tank gun was armory Tampella as a “75mm anti-tank gun mod. 46. ​​" One of the prototypes was sent to Israel for testing for a possible next export production. The Israelis did not begin to order this gun for their own army, and the gun (prototype) remained with the Israelis. Another prototype was used in the mid-60s as a large-scale model (1: 2) to subsequently create the Finnish 155mm howitzer 155K83. The prototype of the gun was transferred to the museum.

Additional Information
Before the Finns, before 1936, the Japanese 44 VK / 75 98 guns were in service with a similar design (barrel at the level of the wheel axle), later sold to Spain (most of them).