November 16 2020
141
About a year and a half ago, when the Americans were withdrawing from the INF Treaty (INF Treaty), the author of these lines, arguing about what future American medium-range missiles could be, realizing that the Americans had almost no real developments in this area, made a number assumptions. Some were done in earnest, and some more as a joke. It was all the more surprising to be convinced that in some jokes the grain of truth is such that even for a fraction of the joke there is no room left in them.

Except "Tomahawk" - no miracles

You and I remember what the Americans' "powerful response" was in the field of INF Treaty. First, there was a one-time launch of the Tomahawk long-range naval missile system from the part of the launch module, which was very handicraftly bolted to the trailer. naval installation of vertical launch Mk.41. This prediction was made, but it was not difficult to make it - the United States has nothing else for its niche ground-based medium-range missile systems, only non-nuclear "Tomahawks" (nuclear charges and the nuclear "Indian axes" themselves have long been dead, and new ones to take nowhere). True, it was assumed that at least some semblance of a normal launcher, the Americans would deign to give birth, fortunately, it's not so difficult. But they limited themselves to "collective farm tuning" Mk.41 on the trailer, as the hero of one cartoon said - "and so it will do!"

Not surprisingly, Lockheed-Martin won a $ 339 million contract for the US Army to create a mobile launcher (it is not specified whether it will be the American favorite, but a non-functional version with a semi-trailer, or a self-propelled launcher), for which should integrate by 2023 the Tomahawk marine cruise missiles, which, by the way, are produced not by this corporation, but by Raytheon. Moreover, the missiles should be integrated without changes - this is especially emphasized. Although at one time, a number of nuances forced the Americans to develop their own version of the "Tomahawk" for ground complexes - I wonder why it is not so now? Saving? It is also unknown whether one of the existing US Army launchers will be adapted or modified, or a new one created. But it should be assumed that no one will try to integrate "Tomahawks" into MLRS MLRS or HIMARS, so the launcher will most likely be new, and it will probably be a semi-trailer with a much more refined version of the Mk.41 module.

With the feet of the Houthis

Much more surprised by the choice in the same contract of a ballistic missile. Again they decided to use a naval missile and also, as emphasized, without changes. At one time, the author made a half-joking assumption that, out of hopelessness, the Americans could choose to create an MRBM based on the SM-3 Block 2A anti-missile, of course, only non-nuclear. Tests of what was passed off as a "prototype of the IRBM" showed that, contrary to the statements of the Russian Foreign Ministry, the United States had nothing really useful in the IRBM area either - then they simply launched a target missile from the launch pad based on the -x solid fuel accelerator. Of course, this homemade missile is about the same as from an electric scooter - a participant in the Formula 50 races.

The Americans, in the end, went about the predicted path, but did even worse - they did not create an MRBM based on the SM-3 Block 1A, they took the newest anti-aircraft missile SM-6 SAM used in the same Aegis air defense system! Moreover, there will be practically no changes in the design. And this is where it gets really interesting. The fact is that the weight of this missile is only 1500 kg, that is, more than half that of the Iskander-M missile launcher, which officially has a radius of no more than 500 km. But let us leave alone the quasi-ballistic maneuvering Iskander 9M723-1 and its other modifications - nevertheless, this is a missile, originally designed for maneuvering in all sections of the trajectory, and created "for growth." The missile's potential, according to rough estimates, allows it to fly at a range 2 times more than its "official" one until the INF Treaty terminates, even without refusing to maneuver along the trajectory. And it carries a warhead of considerable weight - from half a ton and more, except, of course, the thermonuclear, with which it must fly even further. 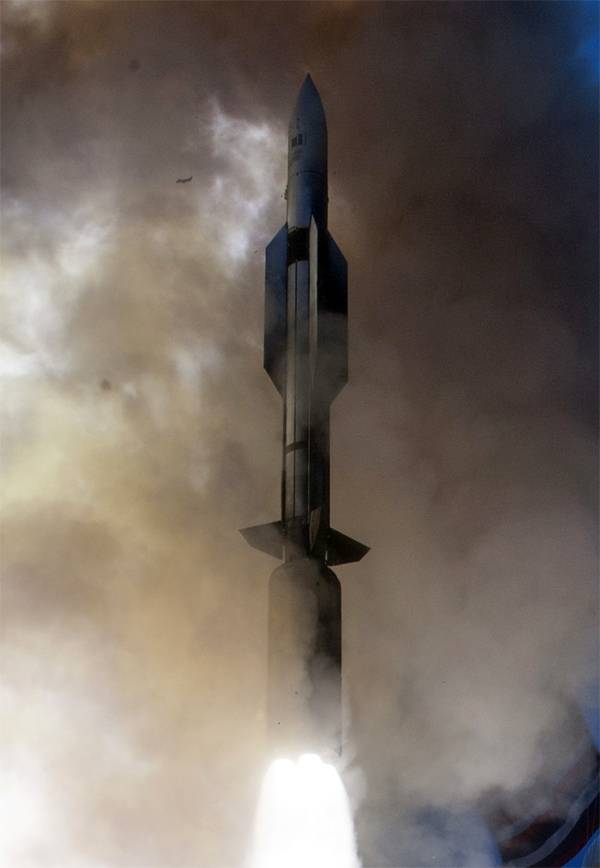 SAM SM-6 (RIM-174 ERAM) and, at the same time, the future MRBM. Looks like it? Yes, somehow not particularly
But the Americans are counting on the fact that the SM-6 will fly away for 1000 km! With a weight of 1,5 tons, a warhead weighing just over 100 kg - is this even possible? Well, the SAM itself has a range for air targets of the order of 240-250 km (there are other figures, but advertising is advertising). For surface targets, it claims a range of up to 450 km - the attack mode against ground and / or surface targets is available for many SAMs and SAMs, including ours. By reducing the weight of the warhead (to the minimum values ​​for centering), abandoning the seeker, when converting the missile into a target missile, it is possible to achieve an increase in the range of 2-3 times, but not always.

Yemeni Houthis (read "vacationers" of the Aerospace Forces, AKS, IRGC, who help solve "missile issues" there), converting old Soviet missiles from the C-75M, from the C-125M into tactical missiles, achieve ranges of up to 125-150 for them km. Of course, by reducing the weight of the warhead. But how do the Americans want to achieve a range of over 1000 km for the SM-6? Reducing the weight of the warhead from a completely undignified 110 kg to 20 kg? What for? What tasks can such a product solve? Even if the Americans adapt the controlled unit there, which is created for the AGM-183 aeroballistic missile (and so far, in the form of even an experimental product, neither the rocket itself, nor the load on it), judging by the dimensions, it will be just about the same weight - so even if so, there will be little sense from such a "MRBM". There is no nuclear ammunition and is not expected, especially with such a warhead, a conventional warhead of this weight will be able to solve an extremely limited set of tasks. This is even if we forget that the accuracy of a maneuvering or gliding combat unit is much more difficult to ensure, in fact, than usual. And there is also such a thing as the speed of the missile defense system, it is about 3.5M, which is not enough for an MRBM and even for an MRMD. Although, if you lighten the rocket, the speed, of course, will increase, but hardly dramatically. 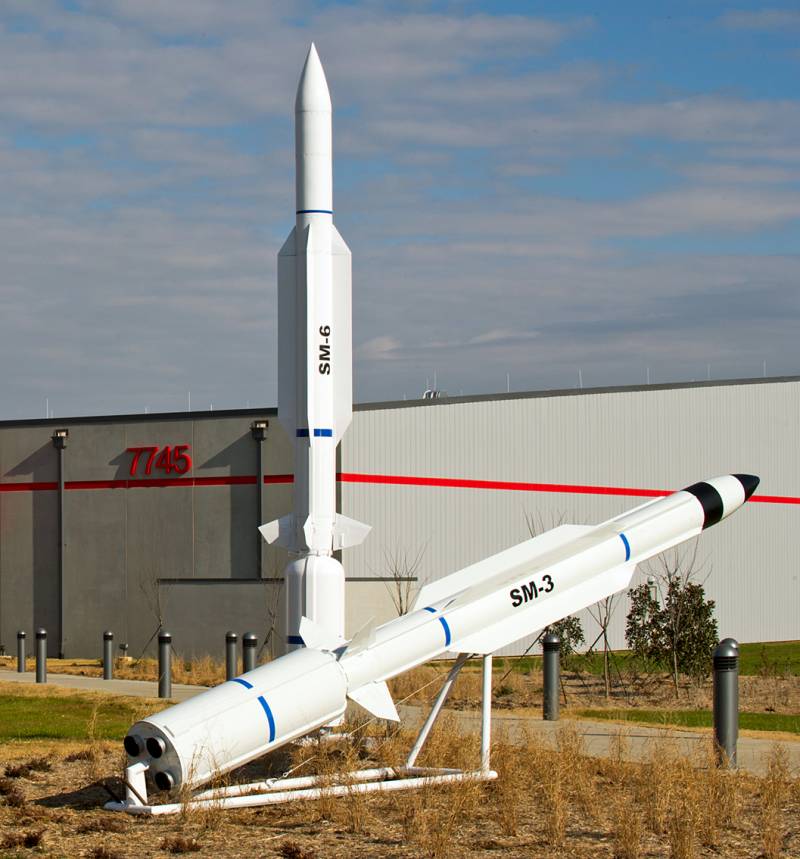 So why such a product? To "inexpensively" adopt the "MRBM" and proudly report on it? While there will still create an MRBM with normal capabilities, for which, too, except for presentations, so far there is nothing real - but for now we will "threaten the Swede" with these incomplete products. More precisely, to Putin and Xi Jinping - they will definitely be scared!

In addition, the unified naval launcher is, nevertheless, of some kind. True, it has not yet been created, but it’s something, and it’s not so difficult to do. In addition, there is another aspect. By 2024-2025 An improved version of the SM-6, the SM-6 Block 1, will be created, where the starting booster from the SM-3 Block 2A anti-missile missile will be used. This SAM will have a large mass and a long range, and a high speed - about 5M. Here it is, while reducing the weight of the warhead, abandoning the seeker and other modifications, it is quite possible to launch it as a ballistic missile at a distance of more than 1000 km. One "but" - the US Army is waiting for a product not on its base, and a couple of years earlier. I wonder what will happen in the end - the customer will understand that his requirements are overstated, and he will be convinced that he needs to accept it as it is, and then, for additional funds and time, get something similar to what he wants? Maybe. However, questions about the suitability of such an under-MRBM, which should be called "Pershing-2" at minimum settings, "as they say on the Internet, for real combat work, of course, persist.

Ctrl Enter
Noticed oshЫbku Highlight text and press. Ctrl + Enter
We are
Situational analysis of the death of the MH17 flight (Malaysian Boeing 777), made on the basis of engineering analysis from 15.08.2014Results of the week. “In our cooperative, the board is always agreed”
141 comment
Information
Dear reader, to leave comments on the publication, you must to register.