November 15 2020
189
So, having burned himself on the PAK FA and having received a fighter of an indistinct generation and the same characteristics at an insane price, with its analogue in the form of the PAK DA program, the Supreme Commander-in-Chief decided not to rush. That is, PAK DA will be developed, of course, but ...


But in Kazan, the Tu-160M ​​"Pyotr Deinekin" has already been launched into the sky, thus marking the beginning of a new stage in the life of the Tu-160. M1 + or M2 is not so important, what is important is that the aircraft developed by Soviet engineers gets a second life in Russia.

Let's leave strategic bombers, now we are not talking about them.

We will talk about another veteran of the Soviet Air Force, who definitely would not hurt to get back on the assembly line. This is the Mi-14 anti-submarine helicopter. 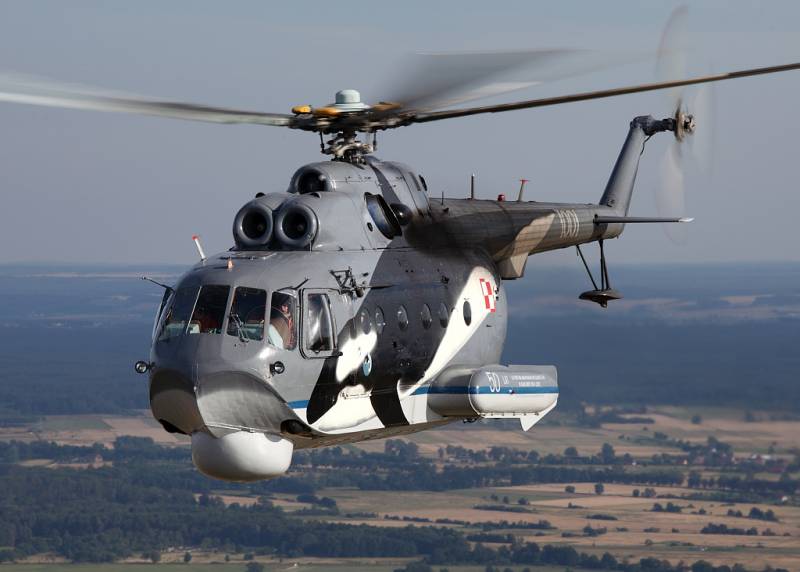 Back in 2015, Defense Minister Shoigu made a loud statement that the production of the Mi-14 would again begin in Kazan. The helicopter, which was removed from production and service, according to many sources, under pressure from the United States.

In this material, we will not consider the issue of the reliability of rumors, but will try to assess how this step can have a positive effect on the country's defense as a whole and how realistic it is at all.

Since 2015, various media have raised the topic of the fact that "just about ..." Mi-14 will again begin to be produced. 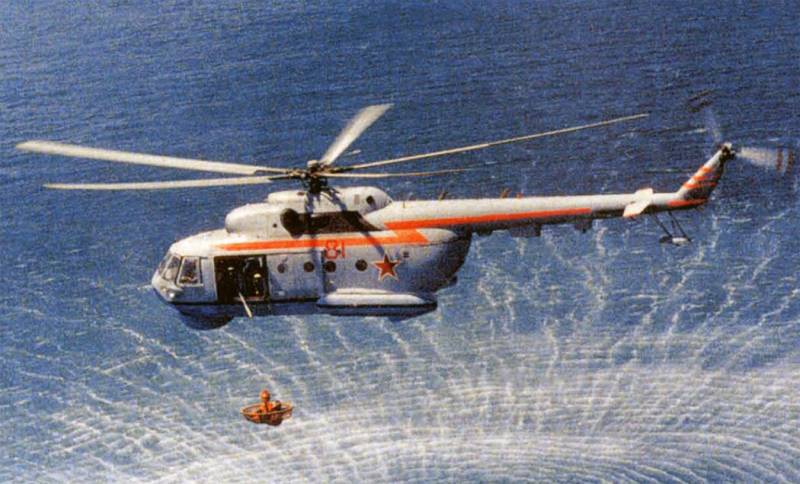 In fact, JSC Russian Helicopters at one time confirmed that the issue of the Mi-14 had been considered and discussed. And there really is a topic for the Mi-14, but it will be split into three stages: repair of operated helicopters, their modernization, and only then the resumption of production.

Does this make sense? Of course have. Roughly the same as in the situation with the Tu-160: we cannot make a new and more modern one - we must take up the old. And the Mi-14 is the only Russian helicopter - a full-fledged amphibian capable of landing, taking off and moving along the water surface. 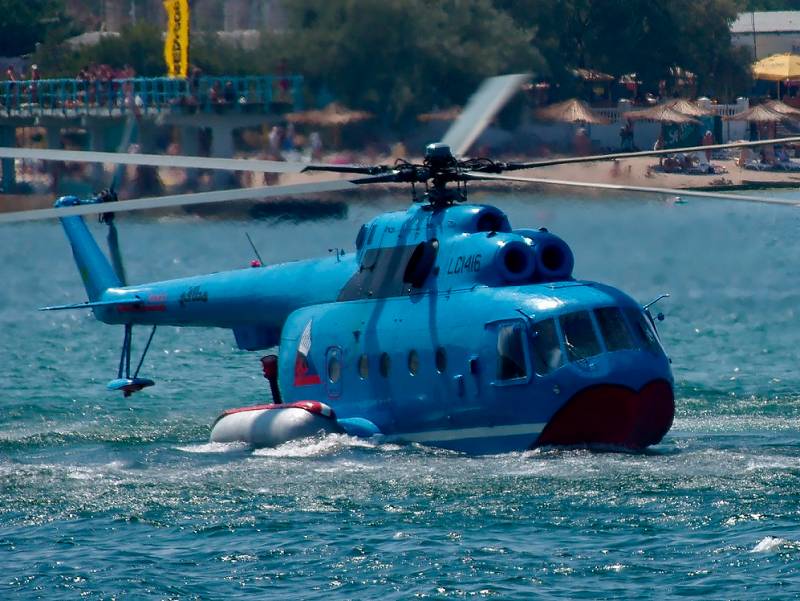 It all began in 1965 with the Resolution of the Central Committee of the CPSU and the Council of Ministers of the USSR on the development of an anti-submarine amphibious helicopter.

A new machine was created on the basis of the Mi-8, which had already firmly entered into use, and proved itself in the best way. However, the Mi-14 is not an improved copy of the Mi-8, it is a machine for which a lot had to be done anew: the engines, the main gearbox, the search and aiming system, and the positive buoyancy system.

But if the party said that it was necessary ... The first flight took place on August 1, 1967, and in 1976, under the designation Mi-14PL, the helicopter was put into service.

The helicopter was very original, mainly due to the innovative boat-type bottom and side floats-balonets. The car had a retractable chassis.

Of weapons the designers were able to accommodate a fairly decent set of search equipment, and from the attack Mi-14PL it could carry an anti-submarine (or anti-ship) torpedo, or depth charges with a total weight of up to 2 kg, or a 000 kiloton Scalp atomic depth charge.

In total, until 1986, 273 Mi-14s of all modifications were produced: anti-submarine submarine, search and rescue PS and minesweeper BT. 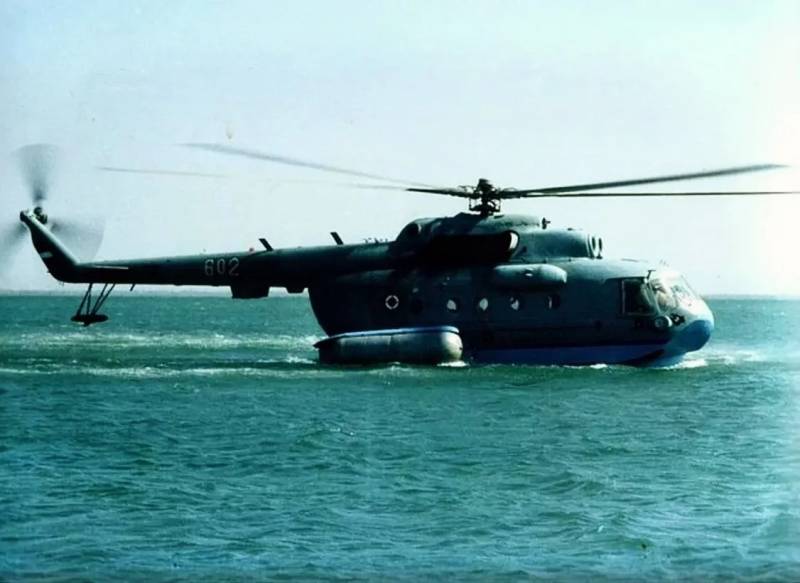 Why was the helicopter good and what did you remember?

The nickname "Liner" was very significant. For a comfortable and spacious cab layout and low vibration. 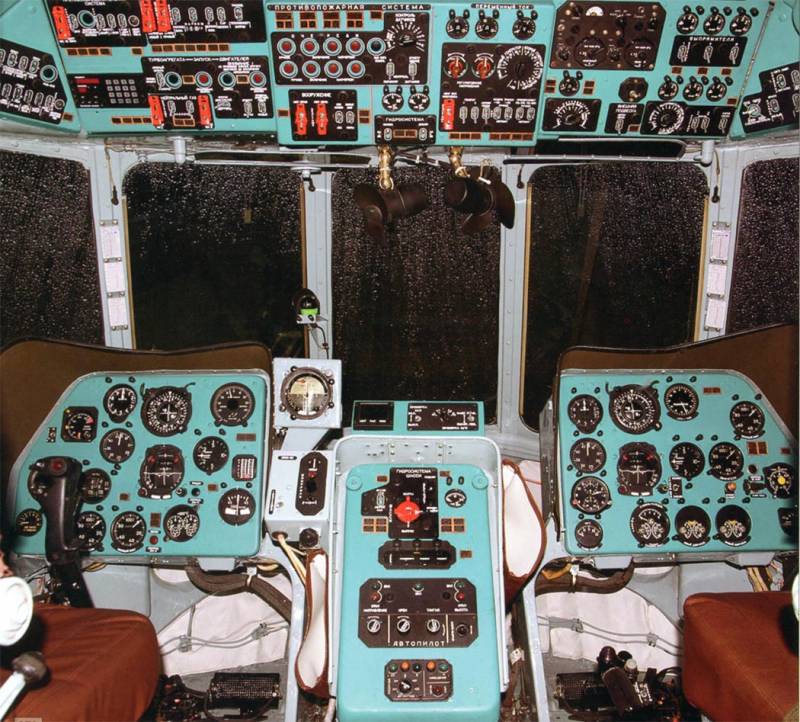 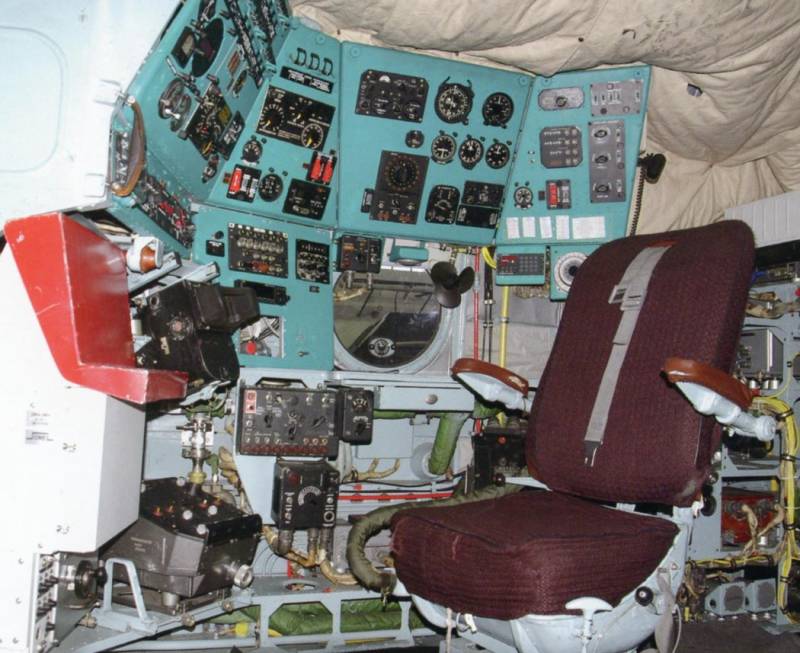 The Mi-14 had a very impressive range. He could stay in the air for 5,5 hours, fly over a distance of up to 1100 km, or conduct a hydroacoustic search for 2 hours. Reliability was also a strong point.

Of course, the main distinguishing feature of the helicopter was the full-fledged ability to land on the water, move on the water surface and then take off. In addition, in the event of engine failure, the Mi-14 could land on water and not sink, as was the case with its successor Ka-27.

Why the Mi-14 was removed from service in 1992 is a question. The arguments were very strong so-so: the obsolescence of the Mi-14 avionics and the need to switch to helicopters capable of operating not only from coastal bases, but also from the decks of aircraft carrying ships. And the general reduction of the Armed Forces.

Well, a helicopter outside the cut has appeared on the shift. Ka-27. He really took off and landed on the decks of ships, but ... Question from 2020: how many of those ships do we have left? And how much are we able to build in the near future?

But regarding avionics, many and many people argued in defense of the helicopter. It is very easy to change the avionics as part of the modernization, which, in fact, was demonstrated by the Poles. And they have the Mi-14PL with a completely modern filling normally performs its duties in the Baltic. Yes, the Poles are also withdrawing the Mi-14 from the armed forces, but this is being done only now, after so many years of operation.

Many authors of publications expressed a version that the Mi-14 became a victim of the purposeful "work" of the American special services and diplomacy. The Mi-14, which proved itself very well as a means of detecting submarines, including low-noise ones, which were considered elusive, made our new overseas "friends" very nervous.

And therefore, taking advantage of virtually permissiveness and putting the necessary pressure on Yeltsin, the Americans removed the Mi-14 from the naval aviation and thus greatly facilitated the life of their submariners.

This version was supported in one of the interviews by the chief designer of the Mil Moscow Helicopter Plant (now part of the ML Mil and NI Kamov National Center for Helicopter Building) Alexander Talov.

And one cannot but agree with those who believe that the hand of the United States is visible behind this. The withdrawal of the Mi-14 from aviation looked too unjustified, and it was all too good for the Americans.

We admit that after the Mi-14 and Ka-27 appeared in the USSR, we did not have more machines of a similar class. And today all that the naval aviation has in terms of anti-submarine weapons is the Ka-27, which the fleet is "wearing out". And some more Ka-27s are at the disposal of the FSB border service.

What kind of helicopter do you need?

The question of whether Russia needs today (I'm not even talking about tomorrow) a modern anti-submarine helicopter is unnecessary. The helicopter is needed, and there is nothing to discuss here.

Another question: which car? Multipurpose or percussion?

In general, today, according to many experts, our fleet is in dire need of a transport helicopter. Hence, a multi-purpose machine.

In general, the experience of using the Mi-14 as a cargo-and-passenger vehicle (a modification of the Mi-14GP, manufactured by Converse-Avia) was at the oil and gas fields. A copy of the Mi-14GP in 1996-1997 successfully serviced drilling platforms in the Caspian Sea.

That is, the Russian Navy should receive a new universal amphibious helicopter, which will replace the Mi-14 and Ka-27. And it will have more modern engines, new digital avionics. Naturally, to pay attention to additional buoyancy, on a wave of more than 3 points, with the propeller turned off, the helicopters turned over. 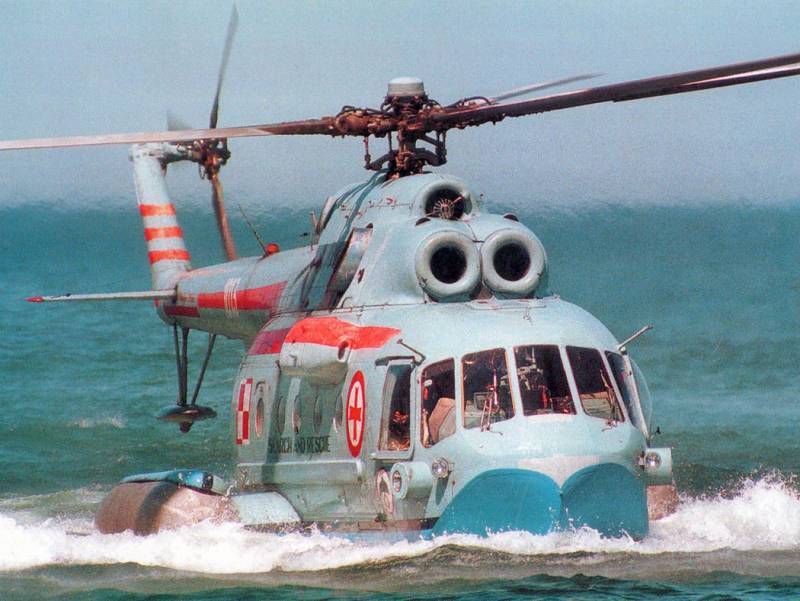 And of course, weapons.

The power of the Mi-14's power plant was sufficient to transport the Scalp nuclear depth charge, a product weighing more than one and a half tons, within the range of the helicopter. In general, 2 kg of combat load allowed a very wide configuration of a set of weapons on a helicopter.

But the set of weapons is a secondary matter. The main question is, is it possible at all to resume production of at least the Mi-14, not to mention newer models?

This is not easy, Kazan has already faced a lot of problems when resuming production of the Tu-160. Restoration of design documentation, technological chains, related suppliers, personnel who worked on projects ...

They coped with the plane in Kazan. This is encouraging. It is possible that it will work with the helicopter.

Of course, the old Mi-14 will partially help out, which can be modernized, and on this "fill your hand". Overhaul and subsequent modernization is something that can greatly facilitate the entire cycle.

There is some confidence that Kazan will be able to solve the problems described above and start production of, if not a new helicopter, then at least a well-modernized Mi-14PL. With more powerful engines and new generation avionics.

Experts believe that today the fleet's need is estimated at about 100 vehicles, both anti-submarine and search and rescue vehicles. 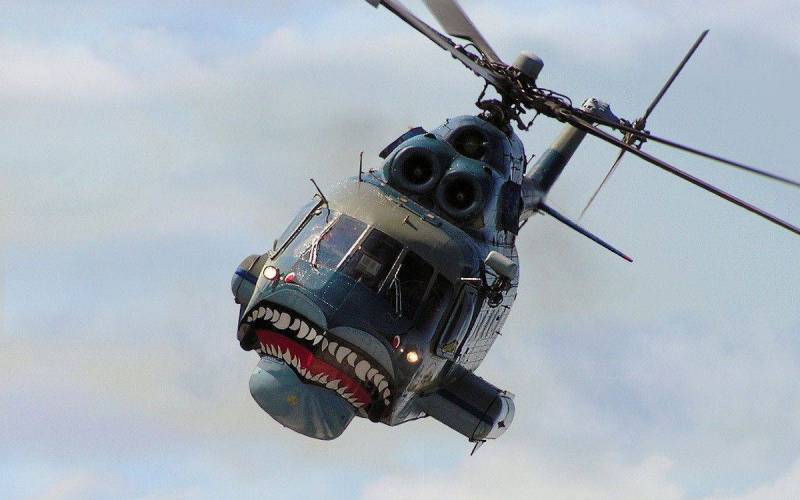 The main thing is not to get carried away with fantastic projects. We already have the Superjet and the MS-21, so we should act more rationally and down to earth. Then it's easier to take off.

And the last thing. The fact that projects “originally from the USSR”, such as the Il-476 and Tu-160M2, are currently being implemented, testifies to two things at once.

First, it turns out that Soviet planes and helicopters were quite fine for themselves, because after 30 years it is impossible for them to come up with replacements yet.

Second, the Russian design school is unable to overtake those who, half a century ago, invented new models of airplanes and helicopters.

There is an excuse for the second. There are few new models in the world from year to year. Still, not the beginning of the last century, when a plywood machine, linen, varnish and an automobile engine were needed for the appearance of a new aircraft.

Today, each new aircraft or helicopter is an achievement, since an aircraft developed from the ground up is a very difficult decision. This is a complex of complex decisions.

And here the path taken by the Americans is quite real. Let's remember the F-16, which made its first flight in 1974, and was adopted in 1979. And it still stands. The question is, how does the first plane differ from those that are on the runways of American airfields 40 years later?

I'm sure it's amazing. With external similarity inside, these planes are completely different.

Why is this path not applicable for us?

Yes, there are plans to develop an amphibian based on the Mi-38. But for this it is first necessary to "test" the Mi-38 itself, master its production, maintenance and repair.

At the same time, we already have an amphibian with which everything can be cranked in the style of the F-16. Moreover, the fleet really does not need so many amphibious helicopters. And for the sake of hundreds of helicopters, it may not be worth developing a new project.

Once we have already made the whole world laugh with the desire to construct something “unparalleled in the world”, in the sense of “Superjet”. Which in essence and characteristics is the Brazilian "Embrayer".

At the same time, the already mentioned Il-476 is only outwardly similar to the progenitor of the Il-76. From the inside, it's a completely different plane.

Why not do the same with the anti-submarine helicopter, which, according to those caring for the fleet, is very necessary for our fleet?

Ctrl Enter
Noticed oshЫbku Highlight text and press. Ctrl + Enter
We are
An-12 in AfghanistanNew bomber for long-range aviation: pros and cons
189 comments
Information
Dear reader, to leave comments on the publication, you must to register.