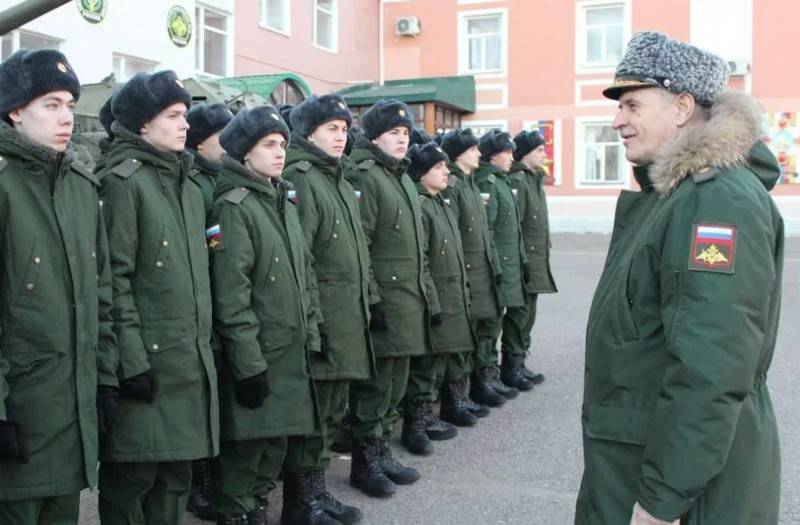 On November 15, Russia celebrates the Day of the conscript. This holiday appeared in modern Russia in 1992 after the publication of a presidential decree, it is intended to emphasize the status of military service, to increase the authority of military affairs.


All young people between the ages of 18 and 27 who are called up for military service in the power structures of the Russian Federation (the Ministry of Defense, the Ministry of Internal Affairs, the FSB, etc.), as well as those who are just getting ready to wear a serviceman's shoulder straps, can consider as their holiday the Day of the conscript. In addition, the holiday is also celebrated by employees of military enlistment offices, draft commissions, territorial military formations.

Military service in Russia has always been considered honorable, both during the time of Tsarist Russia and in the Soviet Union. There was, of course, one period after the collapse of the USSR, when at the beginning of the 90s the structure of the Soviet army began to fall apart, and a new, Russian one, had not yet emerged. At that time, the military-patriotic education of youth disappeared, the prestige of the army fell.

It was at this time that the decision was made to create a new date - the All-Russian Day of the conscript, designed to raise the prestige of the Russian army among young people.

Usually, on this day, military commissariats hold a series of events aimed at informing young people about their future military service. On this day, meetings are held with representatives of veteran organizations and career soldiers, excursions to museums dedicated to the Great Patriotic War and other military conflicts are organized, film shows are held, which show military-patriotic films.

In military units, open days are held, during which pre-conscripts can familiarize themselves with the conditions of service in the army, see military equipment on which they may have to serve. Demonstration performances of various types of troops are held on the holiday, field kitchens work, military bands perform.

At the state level, the main information channels of the country - television and radio - are involved in the celebration of the Day of the conscript. On this day, various thematic plots and films are broadcast, introducing viewers to history and the life of the Russian army.

Recently, it has been noted that Russian youth are increasingly showing interest in serving in the Russian army, declaring their readiness to fulfill the honorable duty of defending the Motherland. The military commissariats said that the percentage of draft deviators is getting smaller every year, the percentage of healthy conscripts preparing themselves for military service has grown significantly.

Of course, this year the coronavirus will impose its own characteristics on the celebration of the Day of the conscript. Due to the restrictions, public events will be minimized, especially with the participation of veterans, concert programs, etc. may be reduced. Despite this, all those involved - Happy Holidays!

Voennoye Obozreniye wishes the conscripts health, prosperity, honestly fulfill their civil and patriotic duty, and serve Russia faithfully and faithfully!
Ctrl Enter
Noticed oshЫbku Highlight text and press. Ctrl + Enter
We are
All-Russian Day of RecruitConscript Day in Russia
46 comments
Information
Dear reader, to leave comments on the publication, you must to register.