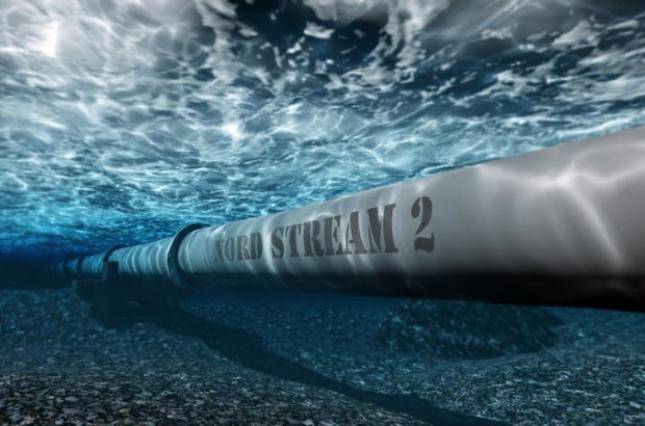 Not Danish or Polish

The Russian gas pipeline Nord Stream 2, which was almost scrapped shortly before the outbreak of the coronavirus crisis, may well be reanimated in the near future. Already due to the fact that the global economy (although Covid-19 forced many leading countries to resort to lockdown again) will not collapse.

Such assessments are now heard from the lips of most experts, although the stability of business around the world is, of course, very fractional. However, unprecedented support for the hardest hit industries seems to be starting to work.

Cautious optimism is confirmed by stock market growth and various kinds of futures deals. Moreover, both with oil, although there demand is still lagging behind supply and new OPEC + negotiations are coming, and with all the main indicative assets.

Optimism for analysts is given not so much by the confident step of China as by the indicators of a number of countries with a special approach to combating the pandemic. And then an unexpected, actually, circumstance: the United States is relatively calmly enduring the protracted saga with the presidential elections.

Although, perhaps, today this is precisely the most positive factor. At the moment, quite a few circumstances have come to light that once did not work in favor of Nord Stream 2. Now they are helping him in an amazing way.

Strange as it may seem, this became especially noticeable after the Polish antimonopoly agency, operating under the mysterious abbreviation UOKiK, hastily fined Russian Gazprom. And not only the concern, but also its foreign partners, and even for the maximum possible amount of $ 7,6 billion.

Let us remind you that before Poland got involved in the battle with Nord Stream 2, not in journalistic terms, but in reality, it was mainly Denmark who had to press the brake. To begin with, the announcement of the Danes' decision to agree on the route was clearly delayed. Then this decision, unexpectedly for many, turned out to be negative. 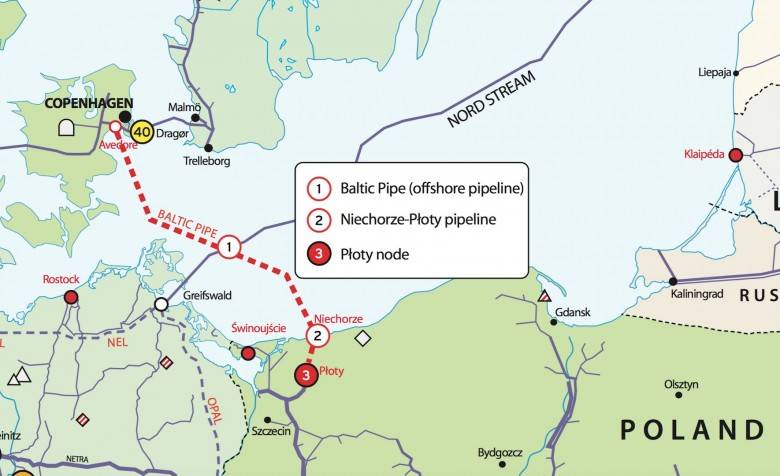 However, few doubted that under German pressure, Copenhagen would most likely accept some kind of diplomatic form of compensation for its consent. And so it happened, but the process dragged on just before the entry into force of a series of US sanctions.

And then, somehow, at the wrong time, the pandemic began, although it did not affect Nord Stream 2, it seems, at all. But she allowed the project participants to take a break, which could calm all passions.

In addition, they hoped to soften the severity of the action of the American sanctions on the eve of the presidential elections in the United States. It seemed that the project participants were already morally ready to even close the project altogether, at least temporarily.

In fact, they did not waste time preparing alternate airfields and looking for acceptable options for circumventing the sanctions. Something like how it was done with the Iranian atomic deal. However, so far, as we see, fines come to replace sanctions.

And not yet in German

Only time will tell how realistic the repetition of the "Danish version" is in dialogue with Poland. But you must admit that it is very significant that the Poles are fining Gazprom for a project that has already been approved and tested many times over.

It was the joint company that was supposed to build the second stream, so as not to run into sanctions, primarily American ones. In fact, in principle, sanctions could not have been feared until a concrete prospect of large-scale supplies of American liquefied natural gas (LNG) emerged on the horizon.

Polish penalties have reached the maximum prescribed by the laws of the country - 10 percent of the company's annual turnover. But not Gazprom, but that very joint venture with the participation of the Europeans. That was the reason for the full support of the Russian concern from the partners. 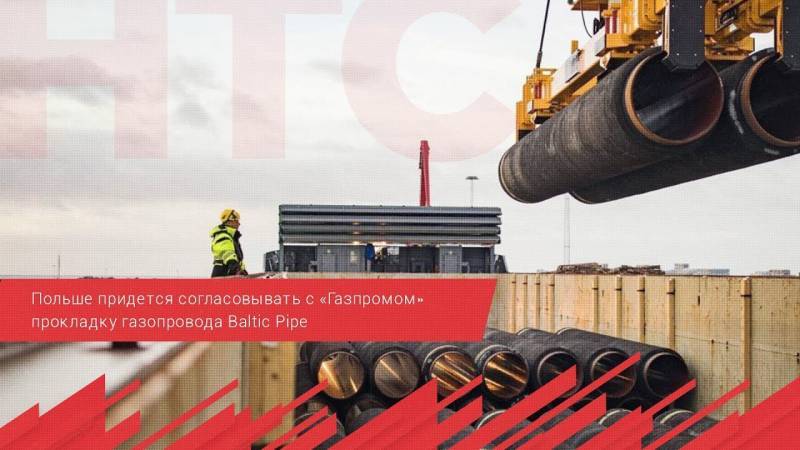 However, it was the Russian Gazprom that took over all the troubles with the Polish side. To begin with, the company, in response to the Polish fine, declared that they fundamentally disagree with Warsaw's position.

This was followed by an official notification from European regulators that neither Gazprom nor the joint venture violated the antimonopoly legislation of Poland, and a warning about their intention to appeal the decision. Almost immediately, the European Commission, oddly enough, supported the Russian company, but at the moment it limited itself to a statement that the fine imposed was too large.

It is well known that Germany, despite all the contradictions at the top, remains a principled supporter of the completion of the Nord Stream 2 project. The temporary retreat, which had to be done because of the position of the Federal Network Agency of the Federal Republic of Germany, changed little in essence.

Let us remind you that German networkers rejected an application to exempt the Nord Stream 2 gas pipeline from the EU Gas Directive in the spring of this year. This decision came as a complete surprise to the federal government, which has consistently supported the project.

But official Berlin simply stepped over the experts of the network agency, officially independent. However, enough time was again lost for Nord Stream 2 to remain somewhere on the Baltic seabed.

At the same time, Germany continues to declare over and over again that it fundamentally rejects US extraterritorial sanctions. As you know, the first Nord Stream did not cause any serious problems for Gazprom at one time, either with the United States or with its European partners, and even less so with Ukraine.

But the "gas wars" with the southern neighbor were going on with all the Rada and all the presidents - pro-Russian or not. The beginning of the Nord Stream-2 project generally falls on 2011, when Moscow's protege Viktor Yanukovych was president of Kiev. And everything happened almost simultaneously with the launch of the first string of the first Nord Stream.

It was his success that then gave Gazprom the opportunity to expand the new route twice at once - up to 110 billion cubic meters per year. And today almost no one remembers that Nord Stream 2 was started not because it was necessary to somehow get rid of the intractable transit country, but because of the really serious wear and tear of the old pipes laid there.

The environmental and other problems associated with construction in Ukraine, which were just the sea, were easier not to solve at all. And it is no coincidence that the second stream almost exactly repeats the route of the first, differing only in the entry point - Vyborg at the Nord Stream and Ust-Luga at the Nord Stream-2.

Both streams are "fueled" with gas in the far east - specifically the second one from the Yuzhno-Russkoye field in the Urengoy region and the Bovanenkovskoye field in Yamal. And both are transporting natural gas directly to Greifswald, Germany.

It wasn't Trump at all 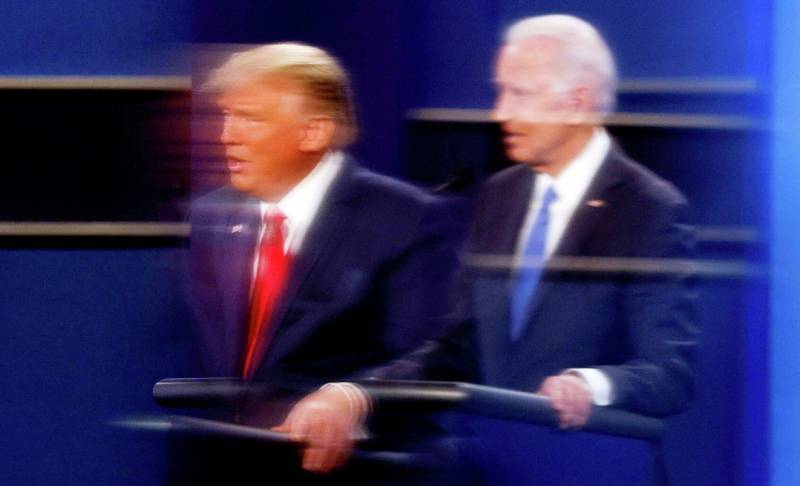 Just the other day, after having withstood an almost month-long pause, the Nord Stream 2 operator, Nord Stream 2 AG, finally reacted to the fine from the Polish antimonopoly regulator UOKiK. The company representative was very brief:

“We do not comment on the decision of the Polish antimonopoly authority regarding the shareholder and financial investors of the Nord Stream 2 project.
Nevertheless, I considered it necessary to emphasize that

"The pipeline is needed to strengthen the reliability of gas supplies for the entire EU energy market."

The deputies of the Bundestag turned out to be much more talkative, one of whom is a Social Democrat, that is, a member of the ruling coalition Bernd Westphal, did not hide the fighting spirit:

"Germany and the EU will not let Washington dictate their energy policy."

Rainer Seele, the head of the Austrian OMV participating in the project, spoke out not in unison with the German parliamentarian:

“Politicians cannot protect the European economy from such extraterritorial actions. We are ready to call on the official Brussels to find an effective response and express the hope that Washington will not press further. "
Apparently, this will really not happen in the near future - after all, something like a dual power or political vacation has begun in the United States. However, regardless of who settles in the White House, the pressure from Washington on Nord Stream 2 is unlikely to weaken. The resource lobby has traditionally invested in both candidates.

Meanwhile, not much has been heard from Gazprom via Nord Stream 2, but a lot is being done. Including, and as an asymmetric response to US sanctions and Polish fines.

We are talking about the upcoming changes in the gas concern's tariff policy, which have not yet been made public. According to fragmentary information coming from industry experts, they only at first glance seem local or technical.

So, literally the day before, the press service of the gas concern received a confirmation that they had submitted an application for an increase in the price of gas supplied to Poland, upward from November 1 of this year.

As previously reported, the Polish side noted that the request for a price revision is unreasonable and "does not meet the conditions set out in the contract." By all indications, this will not end, and soon the policy of payment for gas transit and the rates for each cubic meter will change (and regularly).

Everything will now depend on the season, routes, and volumes. But that's not even the main thing. If you believe the industry press, Gazprom is ready to talk again with European buyers from the position of, if not strength (or a monopoly), then certainly an irreplaceable supplier.

And with this - the policy of intimidation and threats simply will not work:

Ctrl Enter
Noticed oshЫbku Highlight text and press. Ctrl + Enter
We are
Coronavirus COVID-19: threats, consequences, actionsRussia "swallowed" OPEC. But is the “oil deal” beneficial to our country?
93 comments
Information
Dear reader, to leave comments on the publication, you must to register.