How the British sank Italian battleships in Taranto 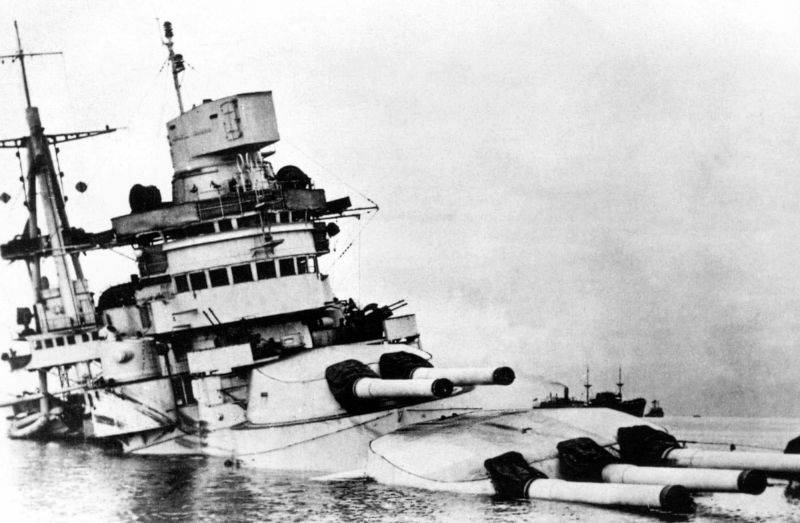 80 years ago a British deck aviation successfully attacked the Italian naval base in Taranto. As a result, 3 battleships were severely damaged. The night in Taranto became an example for the Japanese attack on Pearl Harbor.

Situation in the Mediterranean

The entry of Italy into World War II led to the fact that the armed struggle spread to almost the entire Mediterranean Sea. As part of the Italian fleet there were 4 battleships, 8 heavy cruisers, 14 light cruisers, over 120 destroyers and torpedo boats, over 110 submarines.

At first, Britain and France had an advantage at sea over Italy, which relied on bases in the central and eastern Mediterranean. The Italians were inferior in large surface ships (the Allies had 10 battleships, 3 aircraft carriers, 9 heavy cruisers), but had an advantage in aviation - over 1,5 aircraft.

In the summer of 1940, the Italian fleet in the Mediterranean was solving several important tasks. Provided sea transportation from Italy to Libya, supporting troops in African colonies. Tried to blockade the central straits of the Mediterranean, disrupting British supplies to Malta. Carried out the defense of the Italian coast, its bases and ports.

The British fleet, in turn, was engaged in escorting convoys to Malta from the west and east, in some cases from Gibraltar to Alexandria. Supported the coastal flank of the army in Egypt. Disrupted enemy communications between Italy and Africa.

Failures of the Italian Navy

To solve these problems, the British and Italian fleets more than once went to sea both in separate detachments and in the main forces. At the same time, the British at sea showed greater determination and activity than the Italians. The Italian command preferred to evade the battle. In the summer of 1940, the Italians laid mines in the Strait of Tunis and on the approaches to their bases. The submarine fleet was deployed. Malta was attacked by the Italian Air Force. But these actions did not produce any tangible results. In turn, at the end of June, the British attacked an Italian convoy in the Crete region (one Italian destroyer was killed).

On July 9, there was a battle between two fleets near Calabria. The British fleet was commanded by Admiral Andrew Cunningham. It consisted of 3 battleships, 1 aircraft carrier, 5 light cruisers and 16 destroyers. Italian Navy - Admiral Inigo Campioni. It consisted of 2 battleships, 6 heavy cruisers, 8 light cruisers and 16 destroyers. The Italians could count on the support of coastal aviation and the submarine fleet. Italian aircraft were able to damage the light cruiser Gloucester. During the collision of the main forces and the skirmish, the gunners of the British battleship "Worspite" hit the Italian flagship "Giulio Cesare". Campioni decided to end the battle and, under the cover of a smoke screen, led the ships away. The battle showed the indecision of the Italian naval command, the inadequacy of air reconnaissance and the unsatisfactory interaction between the fleet and aviation.

On July 19, 1940, the British defeated the Italians at Cape Spada in the Crete region. An English detachment led by John Collins (one light cruiser and 5 destroyers) defeated the Italian 2nd division of light cruisers consisting of the Giovanni delle Bande Nere and Bartolomeo Colleoni under the command of Rear Admiral Ferdinando Cassardi. One Italian cruiser was killed - "Bartolomeo Colleoni" (over 650 people were captured or killed), the other fled. Once again, the British showed superiority in the level of training of command and personnel. And the Italian Air Force failed the reconnaissance task in the area, as well as supporting the ships, although their bases were only half an hour away from the site of the sea battle.

Another weakness of the Italian fleet was technical lag and crew training. This was especially true of actions at night, the use of torpedoes, radars and sonars. The Italian ships were nearly blind at night. Italian science, technology and industry lagged far behind the advanced powers. During the war, the Italian navy had to pay dearly for these shortcomings. Another problem is the lack of fuel. Mussolini believed that the war would be short, but he was wrong. The fleet had to restrict the movement of ships in order to save oil. 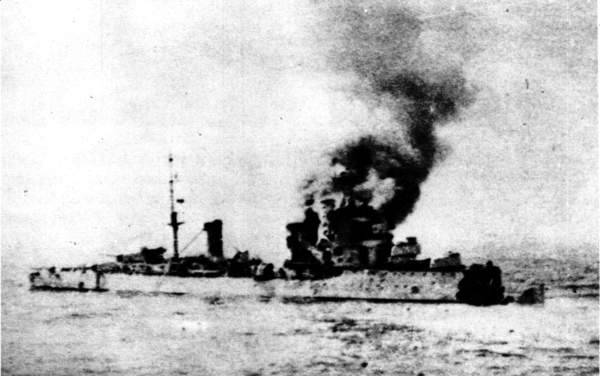 Burning cruiser "Bartolomeo Colleoni" in the battle at Cape Spada

By the fall of 1940, the Italian fleet was reinforced with two new Littorio-class battleships, the Littorio and the Vittorio Veneto. On August 31 and September 6, the Italian fleet went to sea twice to defeat England's Mediterranean fleet. But without success. All six battleships of Italy were based in Taranto (Southern Italy). There were also heavy and light cruisers and destroyers. The port and base were covered with anti-aircraft guns and barrage balloons. The Italians wanted to install network barriers. But the Italian industry did not manage to fulfill the order. Also, many high-ranking naval officers did not like this idea, since the strengthening of the network barriers could slow down the movement of ships from the port and back. As a result, the project was postponed. In addition, the existing networks did not sink to the very bottom. And the new British torpedoes had such a depth setting to pass under the barrage nets.

In October 1940, when Italy attacked Greece (How the mediocre Italian blitzkrieg failed in Greece), the Italian fleet began to perform another task - it provided sea communications to Albania.

The British, in turn, now sought to disrupt enemy communications, create a line for the transfer of forces and supplies from Egypt to Greece. They needed to hurry. And the safe but long way through Africa was no longer there. I had to lead a convoy across the Mediterranean. Three battleships covered him from Gibraltar, three from Alexandria. I had to risk going through the Sicilian Strait. Create superiority over Italian battleships. This concentration of forces deprived the Mediterranean fleet of freedom of action. The British could not effectively guard their communications and disrupt enemy communications at the same time. And the battle on the high seas, after the commissioning of two new Italian battleships, was dangerous. It was obvious that it was necessary to deliver a powerful blow to the base in Taranto, to destroy the core of the Italian fleet. Fortunately, such an operation has been planned for a long time. The Italian ships were overcrowded and were good targets for aviation. And the base's air defense system was weak for such a strategic facility.

Almost the entire British Mediterranean fleet took part in the operation: 5 battleships, 1 aircraft carrier, 8 cruisers and 22 destroyers. Part of the fleet provided cover for the operation. The strike group included the aircraft carrier "Illastries", 8 escort ships (4 cruisers and 4 destroyers). On the evening of November 11, 1940, the British completed their deployment. The aircraft carrier is located 170 miles from Taranto, off the island of Kefalonia. To divert the attention of the enemy, part of the forces was sent to the Otrant Strait. This strait between the coasts of Italy and Albania connects the Adriatic and Ionian seas.

The reconnaissance aircraft took pictures of the enemy base. They were transferred to an aircraft carrier. Admiral Cunningham decided to attack that very night. The operation was attended by two groups of torpedo bombers Fairey Swordfish ("sword-fish"). At about 20:40 the first wave took off - 12 aircraft (6 aircraft served as bombers, 6 as torpedo bombers). The second wave of 8 aircraft (5 torpedo bombers and 3 bombers) took off an hour after the first. The aircraft carried 450 mm torpedoes. The depth of the Taranto harbor was comparatively shallow, and conventional torpedoes, after being dropped from an aircraft, would have buried themselves in the ground. Therefore, the British equipped them with wooden stabilizers, so that when dropped into the water, the projectile would not go to depth.

At about 23 pm, the British attacked the oil depots, seaplanes and ships. Following the bombers at low altitude, torpedo bombers approached in order to slip the barrage balloons. The moon, flares provided good lighting. The enemy ships were clearly visible. The battleship Conte di Cavour received a heavy hit from one of the torpedoes and partially sank. The newest battleship Littorio was hit by two torpedoes. The first torpedo made a hole measuring approximately 7,5x6 meters. The second - made a through hole from the left side to the right, partially destroying the steering gear. The aircraft of the second wave struck the battleship Cayo Duilio with one torpedo. A large gap formed in the starboard side, the ship partially sank. The Littorio received another blow (one more torpedo did not explode). A huge hole was formed - about 12x8 meters. The battleship landed on the ground. The bombs also damaged the aircraft, the cruiser and the destroyer.

Italian battleship "Littorio", damaged as a result of an attack by British torpedo bombers

Given the small number of aircraft that took part in the operation, the success was obvious. The British lost only two vehicles during the attack. The main forces of the Italian fleet were incapacitated for some time, the personnel were demoralized. Italy has two battleships left in the ranks - "Giulio Caesare" and "Veneto". The third - "Doria" - was undergoing modernization. Moreover, in order to avoid new attacks in Taranto, the main forces of the fleet were transferred to Naples. Also, the Italians had to strengthen the protection of sea routes to Albania. Britain achieved dominance in the Mediterranean. Therefore, the British Admiralty was able to transfer part of its forces to the Atlantic. True, it was still far from complete victory over the Italian fleet. Part of the British fleet still defended the sea communications, while the other supported the coastal flank of the army in North Africa.

The successful British attack on Taranto again showed the poor performance of the Italian Air Force. They were unable to detect the enemy's fleet at sea and cover the most important naval base of Italy. All day on November 11, British ships sailed through the center of the Ionian Sea and were not detected. Although the Italians, in the normal work of aerial reconnaissance, had to identify the enemy off their coast and bring ships to sea in order to give battle. Also, the night in Taranto showed the effectiveness of aviation against large surface ships. Small and cheap planes were able to sink huge and very expensive battleships.

However, then only the Japanese paid attention to this successful experience. A group of Japanese military specialists arrived in Italy and carefully studied this battle. The Japanese used this experience in a successful attack against the American fleet at Pearl Harbor. 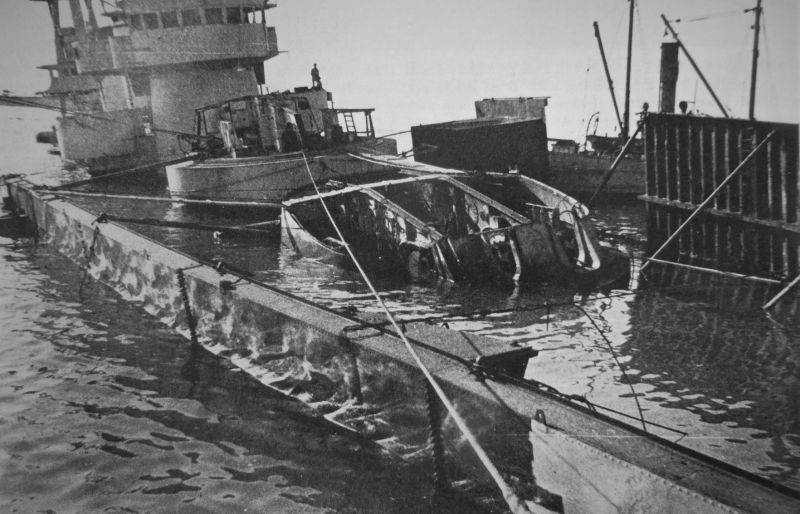 Ctrl Enter
Noticed oshЫbku Highlight text and press. Ctrl + Enter
We are
Fight for the Mediterranean. Fight at Cape MatapanHow died battleship "Novorossiysk"
80 comments
Information
Dear reader, to leave comments on the publication, you must to register.