German estimates of Soviet military production before the war 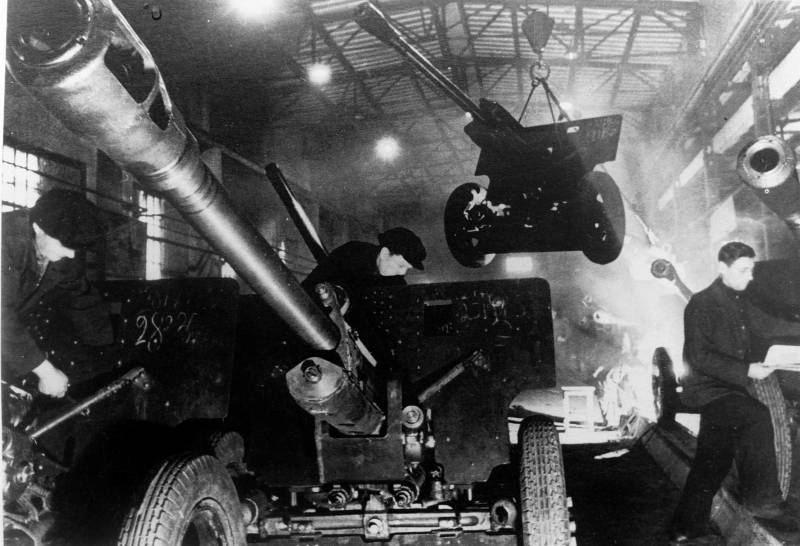 This is a rather boring document at first glance. Tables showing the names of military factories, notes on the nature of production and the number of workers employed. There are quite a lot of these tables. It would seem that there is not much useful information in it. Meanwhile, it was a very important document and was directly related to the "Barbarossa" plan.


This is an overview of the Soviet military industry prepared by the Department of Hostile Armies of the East of the General Staff of Germany at the end of 1940: “Die Kriegswirtschaft der Union der Sozialistischen Sowjetrepubliken (UdSSR). Stand 1.1.1941. Teil II: Anlageband "(TsAMO RF, f. 500, op. 12451, d. 280). There is also the first part of this document, which contains the shortest description of the Soviet economy and its resources that can be used for war (TsAMO RF, f. 500, op. 12450, d. 81). But the second part is more voluminous and contains much more information that is interesting for analysis. 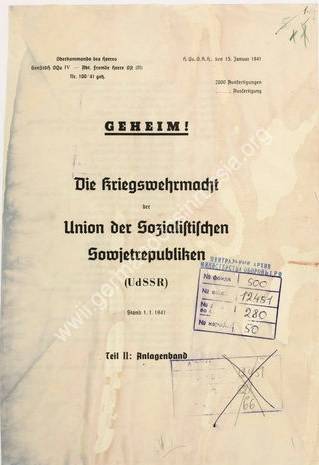 Title page of the handbook on the Soviet military industry
As already mentioned in the previous article on the topic of what the Germans knew about the Soviet military industry, the army intelligence that interviewed the prisoners was most interested in the location of military enterprises on the ground, in cities, landmarks. In terms of the nature of production and capacities, they already had a reference book prepared before the war. It was published on January 15, 1941 with a circulation of 2000 copies and, presumably, was available at the headquarters of the formations and their intelligence departments.

However, its appearance itself was associated with a question that, when planning an attack on the USSR, could not help but be interested: what is the scale of military production, how many weapons and ammunition are produced? The data obtained was clearly compared with the data on military production in Germany, from which followed the answer to another, more important question: does Germany have a chance of winning the war with the USSR? The answer was received, and we will talk about it in more detail below.

How many factories did the Germans know?

The Germans had information about 452 Soviet military enterprises. These included not only individual specialized military plants and factories, but also workshops and divisions of large factories engaged in military production. Large enterprises could have 3-4 such subdivisions, which were considered as separate military production. For example, the Leningrad Kirov Plant produced machine guns, artillery pieces, ammunition and armored vehicles. Thus, the Kirov plant included four military production facilities.

Military enterprises in the directory were categorized by industry:

The most recent data that the Germans had was from 1938. I got the impression that the source was an agent or a group of agents who most likely worked in the USSR People's Commissariat of the Defense Industry and had access to classified documents. But in 1939 the agent or agents were arrested, and the flow of data on Soviet war production ceased. So the guide actually reflects the state of the Soviet military industry at best for 1939.

Also, looking at the list, I calculated that the Germans captured 147 factories from this list during the war, or 32,5%, mainly in Ukraine.

A noteworthy point is the German data on the production of chemical weapons in the USSR as of 1937. There were 44 enterprises in the industry, of which there were nine of the most important and powerful, located in Stalinogorsk (Novomoskovsk), Leningrad, Slavyansk, Stalingrad and Gorlovka. These enterprises, which produced more than half of the Soviet chemical weapons, had, according to German data, a monthly capacity:

Although this issue still requires some clarification (for example, the prepared capacities significantly exceeded the actual production of chemical weapons; it would also be worthwhile to clarify the statistics), nevertheless, the overall picture for the German General Staff was quite clear. If only nine of the 44 Soviet chemical weapons factories produce five times more than the German ones in a year, and more than was spent during the entire First World War, then in such conditions a stake on chemical weapons on the Eastern Front is impossible. The enemy will have much more of it, and he will achieve an advantage using it. Therefore, it is better not to start.

The final part of the document provides an assessment of the general military production in the USSR. The department of hostile armies Ost apparently tried to clarify information both from agent sources and by calculation.

This estimate does not at all shine with accuracy, which is not difficult to establish by comparing it with the reporting data that we have. This suggests that German intelligence did not have direct access to current documentation and reports on military production.

In Germany it was customary to measure production and capacity in monthly output, in the USSR - in annual output. Since we mainly use German data, for comparability, Soviet accounting data for 1939 were recalculated from annual to monthly average. 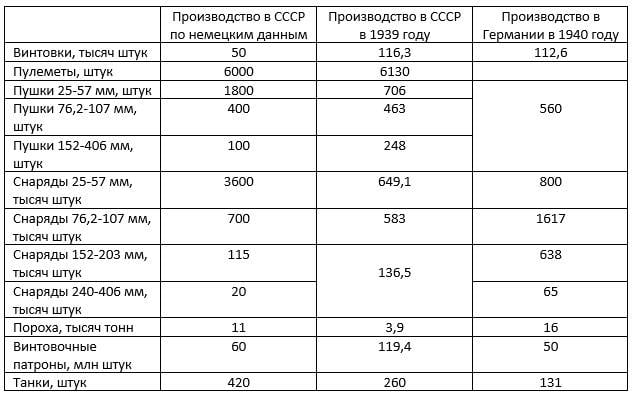 The general conclusion from this data is rather unexpected. The Germans greatly exaggerated the power of Soviet military production, especially in ammunition, gunpowder and tanks. No less strongly overestimated artillery with a caliber of up to 57 mm, both in the number of barrels and in the volume of ammunition production. In 1939, this category included the bulk of tank, anti-tank and anti-aircraft guns. The underestimation of the capacity was for rifles, rifle cartridges and large-caliber artillery.

If we look at the data that the German General Staff had at the time of the decision to attack the USSR, then it is clear from them that the German command decided to go to war due to the obvious superiority of the German army in supplying artillery with shells of 76,2 mm and above ... More than twice as many shells for 7,5 cm FK 18, 7,5 cm FK 38, 10,5 cm leFH 18/40 and so on were produced than in the USSR, according to German estimates. Shells for 15 cm K 18, 15 cm sFH 18 - 5,5 times more than in the USSR. So the German command could count on the fact that the German artillery would score the Soviet one, even if it had more barrels. 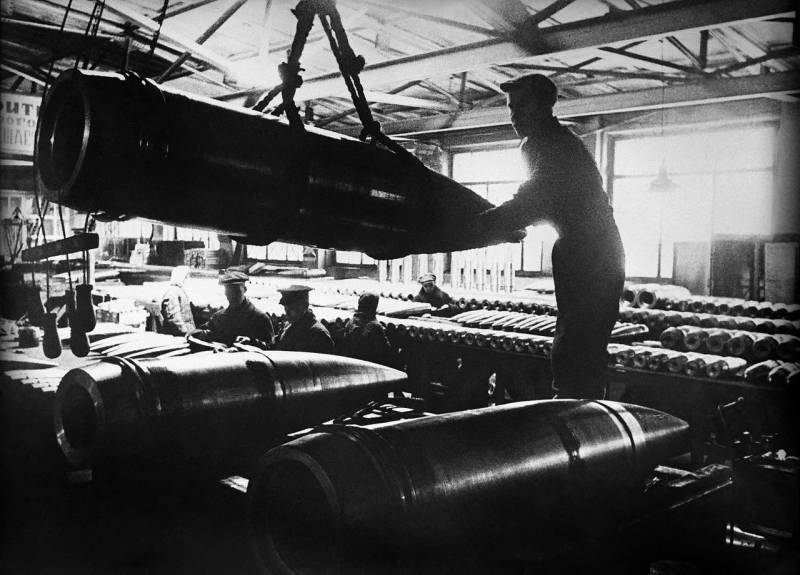 This decision was made on the basis of data, as we see today, very exaggerated. In fact, the German preponderance in the supply of artillery ammunition was much more pronounced. For example, in 76,2-107 mm shells, German production exceeded Soviet production by more than three times. The USSR produced 1939 guns of all types and calibers per month in 1417, and Germany - 560, that is, 2,5 times less. However, guns without shells for them are extremely useless.

The German generals and staff officers were, of course, aware of the tactical and strategic implications of the lack of shells. This moment was well studied by them on the experience of the First World War. The data they had said that the Soviet artillery would also experience a shortage of shells, like the Russian artillery in the First World War. This was the basis for their confidence that they would be able to defeat the Red Army.

So this handbook of Soviet war industry and war production estimates was a very important argument in favor of the Barbarossa plan.

Ctrl Enter
Noticed oshЫbku Highlight text and press. Ctrl + Enter
We are
KNIL: Guarding the Dutch East IndiesDiplomats of the People's Commissariat of Defense: on the eve and during the war
89 comments
Information
Dear reader, to leave comments on the publication, you must to register.