How the Prussian infantry became the best in Europe 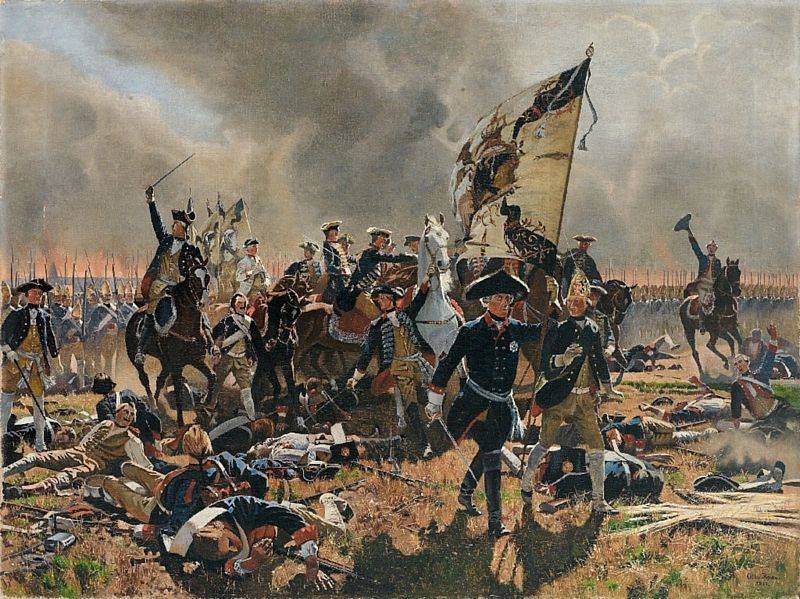 Frederick II at the Battle of Zorndorf, 1758 Artist K. Rechling

Frederick II, also known as Frederick the Great, entered history the Prussian king, devoted to the army and the ideas of its development. During his reign (from 1740 to 1786) the foundations of the Prussian-German statehood were laid. The Prussian infantry has earned itself the reputation of being the best in Europe in terms of training, skill and stamina on the battlefield. Only Russian infantrymen could compete with her in courage, courage and steadfastness in battle. At the same time, Frederick the Great did not create the Prussian army from scratch. He largely took advantage of the fruits of the activities of his father Frederick Wilhelm I, who began the process of seriously strengthening the Prussian army.

In a way, the plot of the story about Alexander the Great and his father Philip II of Macedon was repeated here. The army that brought glory to Alexander was also patiently collected and improved by his father. But Alexander the Great entered history (thanks to his intelligence, charisma and the ability to use this army) forever, who conquered most of Asia with his troops. The same thing happened many hundreds of years later in Prussia, where King Frederick Wilhelm I made the Prussian army the strongest on the continent, but its soldiers became famous in the battles led by his son Frederick II in the wars for the Austrian succession and in the Seven Years' War.

The economy must be economical

The basis of the Prussian army, which was able to fight on equal terms with Austria and Russia, was laid by King Frederick William I. For the long 27 years of his reign in Prussia, "economy" and "control" became the main words in government. At the same time, Frederick Wilhelm I, who left a memory of himself as a "soldier king", began with himself. The Prussian king was distinguished by a rare thrift at that time, was simple and rude, hated Versailles, luxury and the French, pursued extravagance. The savings concerned him personally. The staff of the court servants was reduced to 8, only 30 horses remained in the royal stables, and the size of pensions was also reduced. Only on this the king reduced his budget from 300 to 50 thousand thalers, personally deleting even the most insignificant, at first glance, expenses. 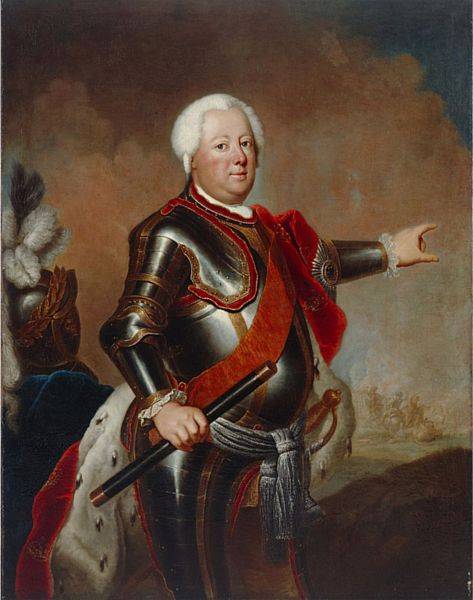 King of Prussia Frederick Wilhelm I
The funds saved were used to strengthen the armed forces, the army was the king's passion. Frederick William I spared no expense on the Prussian army. A case went down in history when the king gave the inherited collection of Chinese porcelain to the Elector of Saxony Augustus the Strong for a regiment of dragoons. The regiment received serial number 6 and was known as the "Porcelain Dragoons" (Porzellandragoner).

The "soldier king" inherited from his father an army of less than 30 thousand people. By the time of the end of his reign in 1740, 83 thousand people had already served in the Prussian army. The Prussian army became the fourth largest in Europe, second only to France, Russia and Austria. At the same time, in terms of population, the country occupied only 13th place on the continent. An interesting feature was the king's love for tall soldiers. The treasury has never spared money on the recruitment of such military personnel. Military service was also curious in this regard. According to Prussian laws, if a peasant had several sons, then the yard and farm were transferred to the son who had the smallest height, so that the tall sons would not shy away from serving in the Prussian army.

It was under Frederick Wilhelm I that military service was introduced, which in general made it possible to turn Prussia into a militarized state. At the same time, the king did not spare money for recruiting soldiers outside of Prussia, but preferred local personnel. By the end of his reign, 2/3 of his army were Prussian subjects. In an era when most of the states of Europe were directly dependent on foreign troops and mercenaries, this was a significant achievement. As good as the mercenaries were, they would never have the same motivation as the subjects of the Prussian crown.

One of the advantages that allowed Prussia to become a strong military power by the middle of the 1500th century was the officer cadre. A lot has been done to raise the prestige of the officer service in the country. The main positions not only in the military, but also in the civilian areas were entrusted in Prussia only to representatives of the nobility. At the same time, only generic nobles could become officers, representatives of the bourgeoisie were not accepted into the officer corps. At the same time, the military profession itself provided a good income. A captain in an infantry regiment of the Prussian army earned about XNUMX thalers, which at that time was a very decent amount of money. 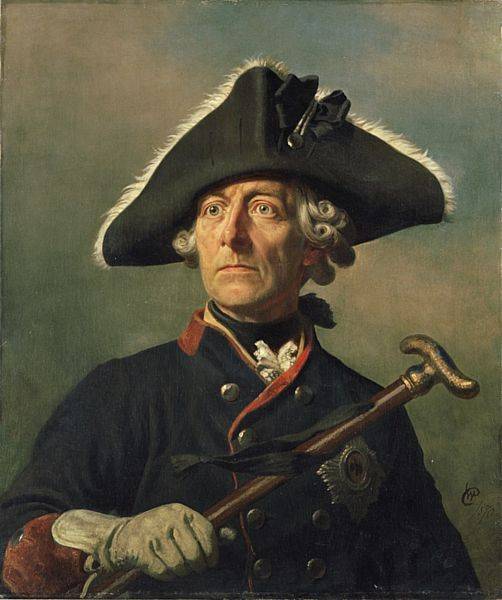 King of Prussia Frederick II the Great
All officers received a decent education at the military school, which was a cadet infantry battalion, where there was a separate cavalry company. Upon leaving the school, infantry officers received the rank of ensign or lieutenant, in the cavalry - cornet. At the same time, the children of noble families could not become officers without receiving a military education. Mercenaries from abroad were also admitted to training, primarily from various Protestant north German lands, as well as neighboring countries: Sweden and Denmark. Despite these restrictions, it was not the nobles who could receive the officer's rank. This rarely happened, but there were such cases. Representatives of the lower classes who distinguished themselves with service zeal and courage could be promoted to officers.

Without a military education, it was impossible to become an officer in the Prussian army. The practice of buying posts, which was actually legalized in those years in some European armies (for example, in France), was not even heard in Prussia. But when appointed to the next position, the origin and nobility did not play any role, and only the real military successes of the officer were evaluated. The training of cadets in the cadet corps lasted for two years. At the same time, the cadets were mercilessly trained and drilled in accordance with the traditional Prussian severity (the same as for the rank and file of the army). Through everything that fell to the lot of ordinary ordinary soldiers, the officers themselves went through two years of training.

The main advantage of the Prussian infantry, which clearly distinguished it from the background of the infantry of other countries, was the unsurpassed rate of fire. The emphasis on firefighting at a distance has always been made and occupied a large place in the training of troops. All the tactics of the Prussian infantry were based on suppressing the enemy with a superior rate of fire, followed by a decisive bayonet attack, which in some cases did not even reach. 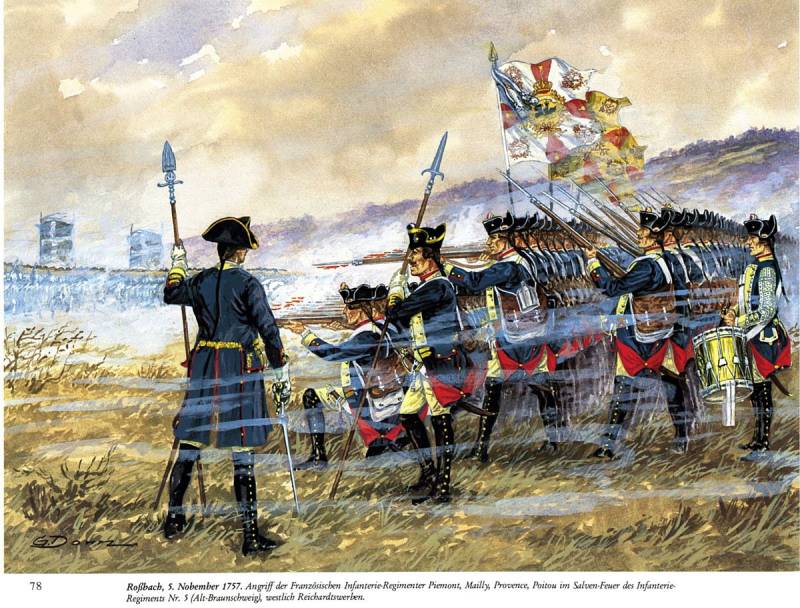 The Prussian battalions literally threw lead at the enemy, managing to make 5-6 volleys at the enemy. The moral influence from such quick shooting was very strong. Often, the enemy retreated and surrendered positions on the battlefield even before hand-to-hand combat. This happened against the backdrop of the actions of the Prussian cavalry, which sought to reach the flanks or go behind enemy lines. The cavalry acted simultaneously with the advancing walls of the infantry.

Actually, given the disadvantages weapons of that time, one could not really hope for accurate shooting. But when the Prussian infantrymen shot the enemy two or three times, more bullets reached the enemy soldiers. And the likelihood that they would find a target was higher. Shooting on the move also negatively affected accuracy. At the same time, the moral effect was still great. And if the opponents passed in front of the lead shaft, then the Prussians, on the contrary, were distracted by the shooting itself. This process occupied the fighters in the most terrible moments of the battle, whenever possible, drowning out the feelings of self-preservation and fear in them.

The advantage of the Prussian army was the standardization of uniforms, weapons, ammunition, daggers, and even belts. This facilitated the supply of troops and the process of training soldiers. A very large place during training was given to movement in battle formations and marching columns. The Prussian infantry always marched a lot, and it paid off. The ability to move quickly and to move consistently over virtually any terrain were important advantages of the Prussians. Strict drill in the middle of the XNUMXth century meant a lot. 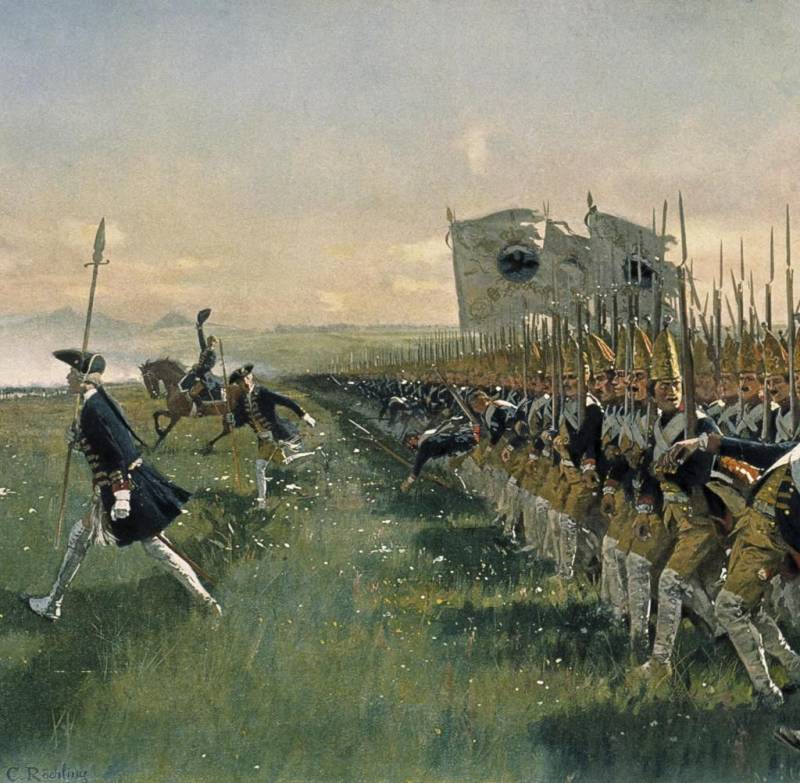 In those years, there was no trace of mechanization of the army. And the standard of mobility was the cavalry units, which were in the minority in any army. The brunt of the battles and battles was borne, first of all, by ordinary infantrymen. The success of battles, and sometimes wars, often depended on how quickly the infantry would reach from point A to point B and be able to line up in battle formations.

The speed of transitions of the Prussian army of the era of Frederick the Great was unmatched in Europe. By this criterion, the Prussian infantry was superior to all. The Prussian infantrymen could move at a speed of 90 steps per minute without disturbing the formation. When approaching the enemy, the speed was reduced to 70 steps per minute. At the same time, if the Austrian infantry, without straining, could overcome about 120 kilometers in 10 days (which did not happen often), then for the Prussian infantry to overcome 180 kilometers in 7 days was quite a feasible task. The gain in the speed of transitions opened up great opportunities for the Prussian army. This made it possible, before the enemy, to take advantageous positions on the battlefield, seize bridges or reach crossings, quickly respond to the threat of encirclement, and transfer troops from one direction to another.

Ctrl Enter
Noticed oshЫbku Highlight text and press. Ctrl + Enter
We are
How Napoleon destroyed the Prussian army under Jena and AuerstedtThe Battle of Zorndorf: A Victory Deserved for Defeat
142 comments
Information
Dear reader, to leave comments on the publication, you must to register.