Why did Americans lose the Vietnam War 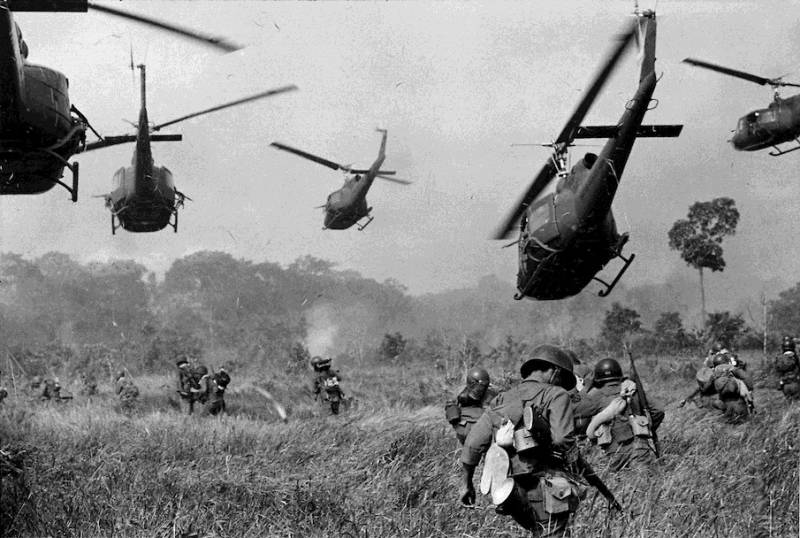 American helicopters cover the offensive of the troops of South Vietnam. Spring 1965

55 years ago, the United States began regular hostilities against North Vietnam and Vietnamese guerrillas. As a result, the Americans lost the war, although they did not lose a single important battle.

To save face, Washington was forced to begin peace talks with North Vietnam and withdraw from the war on "honorable" terms. On January 27, 1973, the Paris Peace Agreement was signed, according to which the American army left Vietnam (all ground forces had already been withdrawn by this time). At the end of March, the Americans withdrew the last of their forces from South Vietnam. Having lost the military support of the United States, South Vietnam quickly fell. On April 30, 1975, the communists took Saigon.

Obviously, the patterns of historical development and the differences between the United States and Vietnam affected.
Vietnam, despite its large coastline, is a continental country as a whole, with appropriate military traditions. The Vieta fought for centuries with their neighbors, with China, with the French colonialists and with the Japanese invaders. For them, a head-on collision, with heavy losses, is the norm.

USA, as a former colony of England, a typical maritime republic. The Anglo-Saxons prefer raiding, raiding operations. A sudden raid, robbery and flight, until the enemy wakes up. Typical pirates and marauders. England and the USA are the founders of "contactless" wars. When the enemy can be suppressed by "gunboat diplomacy", powerful fleets... After the establishment of the military aviation Air squadrons were used in this strategy.

Americans have never been good warriors. They are descendants of pirates, robbers, bandits, slave traders, scalp hunters. During the American Revolutionary War (American Revolution), even the weak British army defeated American rebels everywhere. The Americans were saved from defeat only by the intervention of France. The French won freedom for America.

Also in 1780, the Russian government adopted the "Declaration of Armed Neutrality", supported by most European countries (ships of neutral countries had the right of armed defense when the fleet of a belligerent country attacked them), and thereby violated the naval blockade. Britain had to retreat. Further, all the wars of the States in America were with weak opponents, like the Indians. They were of an irregular nature.

In the First World War, Washington prudently did not intervene at first; it became rich in supplies and loans. When the American divisions landed in Europe, they showed low combat effectiveness. At the same time, the combat potential of the Second Reich was already exhausted.

In the Second World War, the situation was about the same. The Americans and the British fought on secondary and auxiliary fronts and directions. Mostly they tried to crush the enemy with their naval and air fleets. When the Americans landed in the Old World, the Germans (already at the end of their strength) attacked them well. In principle, as the analysis of military operations shows, the Nazis even in 1944 - early 1945, when they were already bled and exhausted by the Russians, could well crush the Anglo-Saxons if there was a truce in the East. But Hitler to the last threw the main and best forces against the Russians, hoping to "negotiate" with the West.

As a result, Americans have never been good warriors. Their military strategy: surprise, treacherous attack, complete superiority over the enemy, "contactless" sea and air war. When the enemy can simply be shot, burned and bombed with impunity. To impose your ideology, a way of life with "freedom" and "human rights". Wait for the broken enemy to crawl on his knees and agree to the "victory of democracy."

In Vietnam, the Americans faced another war. Their soldiers and officers were well-fed and well-groomed, they came for a walk, to have fun. Sports, wine and Asian women. The Americans were not psychologically ready to fight to the death. Only a small percentage of the US military, with WWII experience in the Pacific Ocean (Marine Corps officers), were ready for a hell of a disco in the jungle. But they were few.

In contrast, the soldiers and officers of the Democratic Republic of Vietnam (DRV) had experience in jungle fighting. They fought for the liberation of their homeland since the 1930s-1940s. The combat experience was enormous. Plus the readiness for self-sacrifice, for death in the name of the people. Good local knowledge. The Vietnamese command did not try to fight directly. They relied on partisan, sabotage methods. Excellent disguise, ambushes, traps. The Americans lost the underground war. From the superiority of the enemy in the air and in heavy weapons, the Vietnamese went underground. They created a whole system of underground tunnels, communications and shelters. Headquarters, barracks, hospitals and warehouses were built underground.

Therefore, despite the overwhelming superiority in forces and weapons, they failed to bring the Vietnamese guerrillas to their knees. Even carpet bombing and millions of tons of bombs dropped on Vietnam did not help them. As well as the use of chemical weapons - the use by the Americans of the so-called "Agent Orange" - a mixture of herbicides and defoliants, millions of liters of which were poured from helicopters over the Vietnamese jungle during the war. Millions of Vietnamese have been victims of poisons. Over $ 1 trillion in current prices was spent on the war. At the same time, the losses of the Americans and their allies were constantly growing. During the war years, the United States lost over 360 thousand people (including over 58 thousand dead).

Seeing that the enemy is not surrendering, and the colossal advantage in forces does not help, the Americans began to deteriorate. Desertion has become a mass phenomenon. American society is split.

Pacifists, hippies, youth, opponents of the war demanded the withdrawal of troops and an end to the conflict.

A significant part of the American public and the European intelligentsia (who still remembered the horrors of World War II) demanded peace. The famous British musician John Lennon, who opposed the war, wrote the song "Give the World a Chance." The most famous American boxer, Cassius Clay, converted to Islam at the peak of his career and took the name Mohammed Ali in order not to serve in the army. For this act, he was deprived of all titles and the right to participate in competitions for more than three years. Thousands of Americans have refused to serve in the US military.

After the signing of the armistice, US President D. Ford was forced to declare amnesty to all draft evaders and deserters. More than 27 thousand people have surrendered. In 1977, the next US President, D. Carter, pardoned those who fled the country to avoid being drafted into the army.

Other signs of the disintegration of the American army were: a wave of suicides (including veterans - the "Vietnam syndrome"), rampant alcoholism and drug addiction. Tens of thousands of soldiers who fought in Vietnam became drug addicts.

The Americans in Vietnam ran into a people's war.

Viet Cong is a Vietnam War veteran who fights on the side of the National Liberation Front of South Vietnam, also known as the Viet Cong. Former Vietcong activist Bei Cao told American historian and Indochina war veteran David Hackworth:

“We knew that your stocks of bombs and missiles would be depleted before the morale of our fighters.”

“Yes, we were weaker in material terms, but our fighting spirit and will were stronger than yours. Our war was just, but yours was not. Your foot soldiers knew this, as did the American people. "

Most of the people supported the struggle against first the French and then the American occupiers. People provided the partisans with food, information and joined their ranks. They gave fighters and labor. The communist movement was united with the national liberation movement.

Only total genocide can be opposed to such a war. Like the Nazis on the territory of the USSR-Russia. The Americans tried - carpet bombing, poisoning with chemicals, concentration camps, massive repression and terror. But historical the moment was different. Information about war crimes was leaked to the world media. Even a part of American society has come out against the anti-human methods of the United States. In addition, there was the Soviet Union, communist China, and other socialist countries. That is, the "world community" could not close its eyes to the total suppression and destruction of a significant part of the Vietnamese people.

Also Vietnam was not left alone. China and the Soviet Union (Russia) provided assistance. China provided manpower and material assistance. The Chinese helped to organize an air defense system, provided technical support in the construction of transport infrastructure. They avoided direct clashes with the Americans. Also, the PRC provided great military-material assistance. The main military cargoes from the USSR came to North Vietnam through the territory of the Celestial Empire. However, when Mao Zedong saw that the Vietnamese leadership gravitated more towards Moscow than towards Beijing, the volume of supplies decreased.

The most large-scale military and technical assistance to the people of Vietnam was provided by the Soviet Union - Russia. Air defense systems, airplanes, Tanks, weapon. Our anti-aircraft gunners defended the sky of the DRV. Thousands of Soviet officers, sergeants and soldiers took part in the hostilities on the side of the Vietnamese. Thousands of Vietnamese soldiers have been trained in Soviet military schools and academies. Since that time, Vietnam and the USSR-Russia have become fraternal countries. For many decades, the Vietnamese had great respect for the Russians.

Ctrl Enter
Noticed oshЫbku Highlight text and press. Ctrl + Enter
We are
Chronicle of the disaster: how the United States lost the Vietnam War in 1965 – 1975South Vietnam. How Saigon regime appeared, developed and collapsed
177 comments
Information
Dear reader, to leave comments on the publication, you must to register.