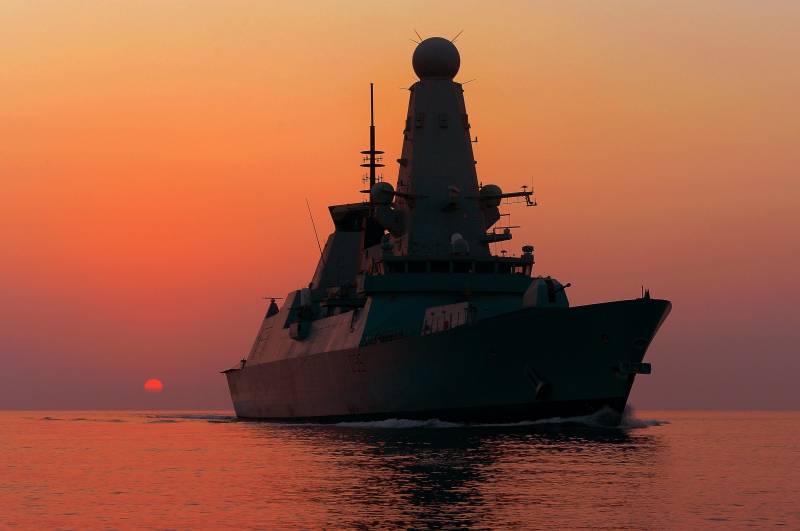 As you know, information about the recently acquired certain regularity of operations in the Black Sea of ​​the Arleigh Burke Flight I / II / IIA class destroyers of the United States Navy (USN) and the Type 45 air defense missile defense destroyers (Daring class) of the Royal Navy (RN) has lost its former level of sharpness. In view of the commonplace "dive" between the NATO Naval Forces and the Black Sea fleet The Russian Navy (Chernomorsky Flot, The Black Sea Fleet of the Russian Navy) in the Azov-Black Sea conventional theater of operations, this topic is no longer the subject of close attention of domestic news and military analytical sites. Meanwhile, a number of military-political and operational-tactical issues are caused by the sudden intensification of patrolling of the western sector of the Black Sea basin by the British Daring class destroyers. While literally two years earlier, the tasks of combat duty and the permanent presence (not without incidents) of the NATO Joint Navy near the Crimean A2 / AD zone were assigned exclusively to the crews of American Arley Burke-class destroyers.

Undoubtedly, the starting point for the beginning of the stage of the permanent presence of Type 45 destroyers in the Black Sea is nothing more than the memorandum on military-technical cooperation concluded between London and Kiev on October 7, 2020. One of the unspoken points of this document provides for the transfer of property of a certain sector of the berthing infrastructure of the Odessa seaport to the disposal of Whitehall in general and the Royal Navy of Great Britain in particular for constructive adaptation to the basing and maintenance of the surface component of the British fleet.

Considering the fact that the primary goal of the command of the British Navy in the Black Sea basin is to establish comprehensive control over all underwater "loopholes" of operating the ultra-low-noise diesel-electric submarines of pr. 636.3 "Varshavyanka" of the Black Sea Fleet. (An eloquent confirmation of this is the repeated mapping of the Black Sea bottom relief by the British hydrographic survey ship HMS "Echo"). In this connection, the more frequent episodes of the appearance of promising Daring-class destroyers on the near approaches to the Crimean A2 / AD zone do not cause absolutely any surprise. After all, these surface ships can boast of the presence of the most powerful mid-frequency in-hull MFS-7000 (Type 2091) SJCs located in bulb fairings and represented by 420 - 430-element acoustic arrays based on highly sensitive hydrophones capable of monitoring the underwater space for sound-emitting objects in the second far zone acoustic illumination (70 - 140 km).

At the same time, the less expensive Type 23 "Duke" anti-submarine frigates equipped with Type 2050 in-hull sonar systems and Type 2031 low-frequency sonar stations based on flexible extended towed antennas could well cope with this range of tasks. the leading American destroyers of the Arleigh Burke Flight I / II / IIA class, equipped with the latest active-passive sonar systems AN / SQQ-89 (V) 6-15. The question arises of the following nature: what unique technical "trump card" of the "Daring" class destroyers turns these warships into almost the only surface platforms of the United NATO Navy, capable of fulfilling the tasks set by the command of the British Navy in the operational area of ​​responsibility of the Black Sea Fleet as a whole and aviation The Russian Navy in particular?

Obviously, in this case we are talking about the Sampson multi-functional radar stations for detection / tracking / target designation, located in spherical radio-transparent fairings on the main superstructures of type 45 EM. Unlike the American multifunctional AN / SPY-1D radar based on passive phased array, having a single microwave generator (klystron / TWT) for powering the emitting arrays of transmitting and receiving modules, the Sampson family radars are represented by several times more noise-immune two-way active phased array, each of the 2560 transmitting and receiving modules of which is equipped with individual gallium arsenide microwave transistor attenuator. Individual regulation of their power by means of a group of RISC-microprocessors i860 (in conjunction with the highest frequency selectivity of the primary processing unit) allows Sampson radars to form a flexibly simulated directional pattern with "dips" in sectors of the enemy's radio-electronic interference sources.

Consequently, the Sampsons are much more effective (than the AN / SPY-1D) to neutralize the jamming effect of such electronic countermeasures as the L-265M10 omnidirectional containerized electronic warfare systems Khibiny-M and Khibiny-U, placed on multi-purpose hangers Su-35S fighters of fighter aviation regiments of the Russian Aerospace Forces, as well as multifunctional Su-30SM fighters of the 43rd separate naval assault aviation regiment of the Russian Navy. This feature provides Daring crews with a much higher situational awareness in a difficult jamming environment than the operators of the advertised Aegis combat information and control systems of the Arley Burke destroyers.

Meanwhile, the operation of Sampson radars in the modes of viewing the airspace over the Azov-Chernomorsky theater of operations and the "linking of routes" of air objects provides operators of radio intelligence equipment of the Russian Aerospace Forces with an "unpaved field" of activities in the field of analyzing the frequency parameters of these products for further modeling algorithms interference counteraction, which can be loaded into the on-board computer of any modern electronic warfare systems developed by the Kaluga NIIRT, the Central Scientific Research Institute named after Academician A.I. Berg and other enterprises of similar specialization.

Ctrl Enter
Noticed oshЫbku Highlight text and press. Ctrl + Enter
We are
Situational analysis of the death of the MH17 flight (Malaysian Boeing 777), made on the basis of engineering analysis from 15.08.2014Strangulation: the context, conduct and consequences of the American naval blockade of China
48 comments
Information
Dear reader, to leave comments on the publication, you must to register.