IS armor against the German 88-mm cannon. A perfect success story 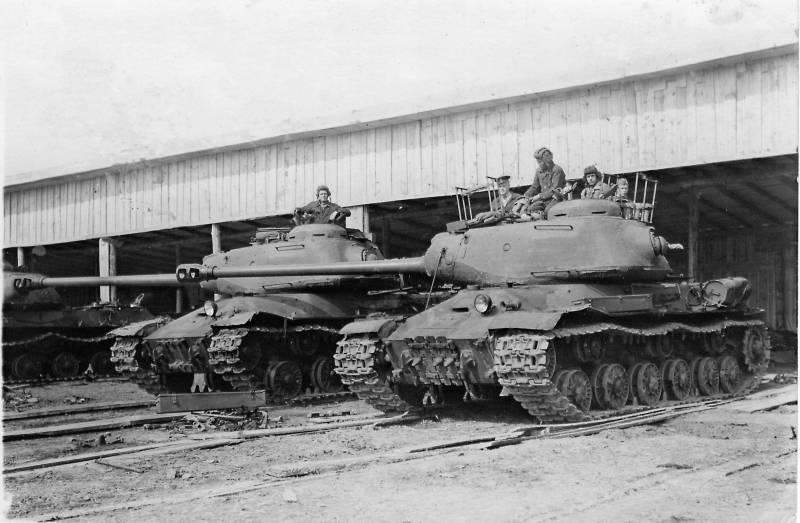 Tanks IS-2 of the 74th self-propelled heavy tank regiment next to the tank park built in Gustrow. Source: waralbum.ru

Among all the variety of defense technologies of the Soviet Union during the Great Patriotic War, armored production was particularly progressive. IN previous section stories it was about a fairly rapid growth in the capabilities of domestic defense metallurgy in the pre-war period.

Having created the 8C high-hardness armor, the Soviet industry in one leap reduced the planned lag behind world trends. As you know, not all tank factories managed to comply with the difficult conditions for melting and hardening such armor, which negatively affected the quality of the T-34. But, nevertheless, in most cases, the 8C armor met the requirements for medium tanks of the Second World War.

Unfortunately, this could not be said when applied to heavy tanks of the KV series. The tactical characteristics of the KV armored hull with an armor thickness of 75 mm showed its satisfactory resistance only to 37-mm shells of German artillery. Under fire from 50-mm shells, a heavy domestic tank made its way from the nose with sub-caliber shells, and armor-piercing shells from the sides and stern.

By 1943, a situation arose when the Red Army actually did not have a heavy tank capable of withstanding most of the German artillery. And already, when the Germans had 88-mm versions of the anti-aircraft gun on their tanks and anti-tank self-propelled guns, the situation became completely critical. Medium hardness armor of grades 49C and 42C for KV was decidedly unable to cope with enemy shells. If with the T-34 there were attempts at additional shielding, in particular at the Krasnoye Sormovo plant, then it was already impossible to save the KV - a fundamentally new armor was needed. 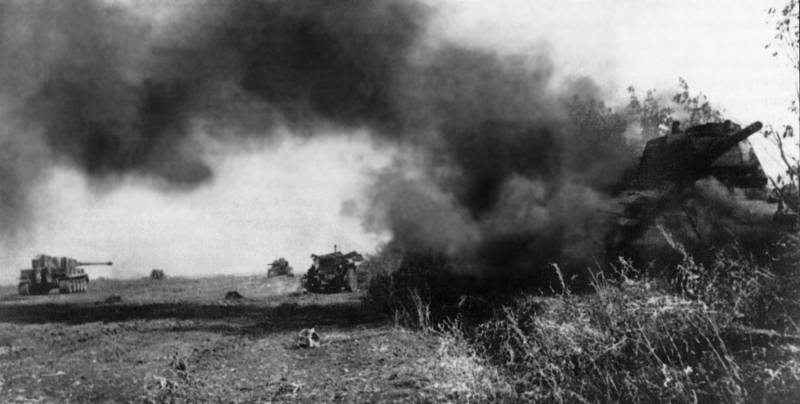 Burning tanks of the Kursk Bulge. Source: waralbum.ru
TsNII-48 or Armored Institute played a key role in the development of domestic armor in the pre-war period and during the Great Patriotic War. It was founded in 1939 by metal scientist Andrei Sergeevich Zavyalov and made an enormous contribution to the evolution of domestic tank building.

However, even before the opening of TsNII-48, intense scientific and practical work was going on in the field of military steels. So, at the Magnitogorsk Metallurgical Combine "Special Bureau" appeared in 1932. Among the main tasks of the bureau was the analysis of experimental heats, the study of the temperature regime of quenching and tempering steels for the army. It was in the Magnitogorsk bureau that the key parts for the Katyusha rocket launcher were manufactured.

Magnitogorsk Metallurgical Combine. 1945 year. Source: velikaya_otechestvennaya_voyna.academic.ru
After the bureau received the official status of "armored" in August 1941, the personal files of all employees were classified. For example, there is still no way to trace the fate of the engineer K.K.Neyland, one of the developers of tank armor.
Why is there such an emphasis on the Magnitogorsk Combine? Because it was here in 1943 that many months of work was going on to develop new armor for IS tanks, but more on that later.

The importance of Magnitogorsk is evidenced by the fact that the plant smelted armor for every second Soviet tank of the war period. At the same time, before the war, local metallurgists did not specialize in armor at all. In the pre-war assortment there were only high-quality and purely peaceful carbon steels. The plant did not have "sour" open-hearth furnaces (specific for 8C armor) and there was not a single steelmaker who would work on "sour" furnaces.

With the beginning of the war, the plant was instructed to urgently organize the production of armor. Metallurgists, with the help of TsNII-48 employees who arrived from the Izhora plant, quickly mastered the smelting of armor steel in 150-, 185- and 300-ton main open-hearth furnaces, which has not been done anywhere in the world. During the four years of the war, metallurgists from Magnitogorsk mastered 100 new grades of steel for the military industry, and also brought the share of high-quality and alloy steels in the total smelting to 83%.

The plant was constantly expanding - during the construction, 2 blast furnaces and 5 open-hearth furnaces, 2 rolling mills, 4 coke oven batteries, 2 sintering tapes and several new shops were commissioned. On July 28, 1941, for the first time in the world, an armor plate was rolled on a blooming mill, which was not originally intended for this purpose.

In the difficult time of the first months of the war, it was the Magnitogorsk Metallurgical Plant that managed to cope with the government's task of organizing armored production two months earlier. It was truly a feat, considering how often Soviet factories thwarted production plans in 1941. Therefore, it was in Magnitogorsk that the largest armored camp in the country came from the evacuated Mariupol Ilyich Armored Plant in the fall. This apparatus was much better suited for the production of rolled armor than civil blooming. Given the successful experience in the field of armored production, it was to Magnitogorsk in 1943 that TsNII-48 specialists headed by A.S. Zavyalov were sent to create new armor for the IS series tanks and heavy self-propelled guns.

The head of the Armored Institute Zavyalov recalled the time he spent in Magnitogorsk:

“That was work. We slept on tables in the "armored bureau", overgrown with stubble to the very eyes ... Apparently, we were still quite good experimenters. And then they understood what would happen if the front was left without heavy tanks. But he didn't stay. "

The initial topic of the work was the cast armor for the IS-2 tank, which was supposed to withstand the German large-caliber artillery 75-88 mm. To simplify the production of the tank, up to 60% of its nodes were cast, and cast armor was initially worse than katana. It was decided to create high hardness armor, which was later named 70L. Experimental plates were fired by a German 88-mm anti-aircraft gun with a sharp-headed armor-piercing heterogeneous projectile. It turned out that 100-mm high-hardness armor for the IS-2 is as strong as rolled medium-hard armor 110 mm thick. It is not difficult to assess how much this simplified the technical production process and lightened the tank hull. 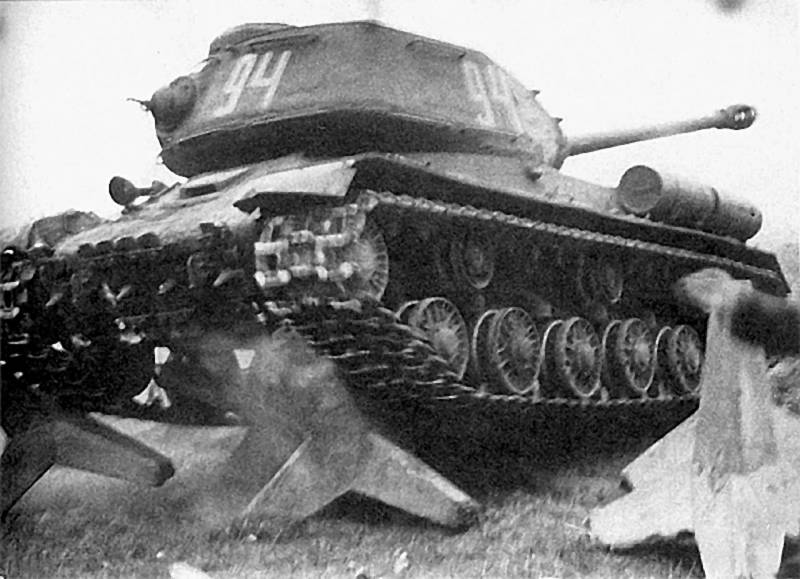 Tank IS-2 overcomes concrete anti-tank "hedgehogs". East Prussia, 3rd Belorussian Front, January 1945 Source: waralbum.ru
The shelling of the experimental towers, made according to the developed technology by the casting method in thicknesses of 100-120 mm, was carried out already from the domestic anti-aircraft gun 52-K, caliber 85 mm. As stated in one of TsNII-48 reports:

“As a result of shelling, the tower on the starboard side was hit by 12 armor-piercing shells with a high accuracy of destruction, which did not lead to serious destruction. After the eleventh and, especially, the twelfth lesion (at a distance of no more than 1,5 calibers from the tenth and the edge), an exit to the edge, the development of a crack between the lesions and the formation of irregular holes were obtained. In the process of further tests when firing the left side and stern of the tower with armor-piercing 88-mm shells (17 shots in total), all the damage was viscous (14 dents, two through damage, one hole with a sub-caliber projectile), cracks did not develop when the starboard was hit. "

Subsequently, samples of 70L cast armor with a thickness of up to 135-mm were obtained, numerous fire tests of which with 85-mm domestic shells (German, obviously, were no longer enough) confirmed the correctness of the chosen development path. When the design angles of the parts are less than 60 degrees to the horizon, the high-hardness cast armor made of 70L steel in terms of armor resistance becomes equivalent to rolled armor of the same thickness.

But not everything was so rosy. When researchers fired high-hardness armor with 105-mm shells (sharp-headed armor-piercing) and compared it with similar armor of medium hardness, it turned out that the new armor was inferior to the classical one at all angles of encounter with ammunition. The enemy's 105-mm calibers were not prevalent on the battlefield, so this shortcoming did not make a decisive difference in choosing the type of new armor protection for tanks.

The disadvantages include the relatively low survivability of high-hardness armor compared to medium-hard armor - after all, hard armor was more prone to cracking during massive shelling. But the manufacture of high hardness armor by casting increased the survivability of steel relative to the armor of medium hardness. This was due to the absence of delamination in the metal and the greater rigidity of the structure of the hull and turret parts. Maneuvering between such conflicting parameters, TsNII-48 specialists, together with the metallurgists of Magnitogorsk, nevertheless brought to mind the 70L armor and recommended it for cast elements (first of all, towers) of heavy tanks and self-propelled guns.
Chemical composition (%):
C 0,18 - 0,24
Mn 0,70 - 1,0
Si 1,20 - 1,60
Cr 1,0 - 1,5
Ni 2,74 - 3,25
Mo 0,20 - 0,30
P ≤0,035
S ≤0,030. 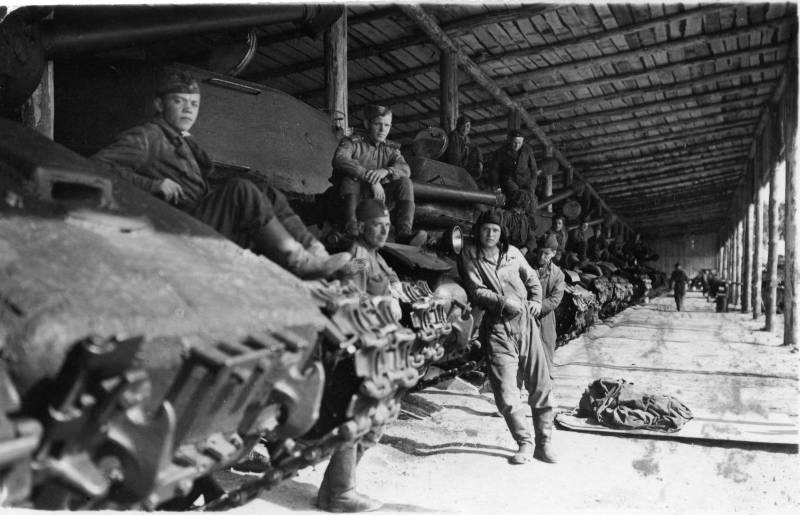 IS-2 tanks and their crews from the 88th separate heavy tank regiment with a tank fleet built in German Gustrow. Source: waralbum.ru
In the historical series of the publication "Problems of Materials Science", prepared by researchers from the National Research Center "Kurchatov Institute" - Central Research Institute of KM "Prometey", describes the main technological process of heat treatment of the cast turrets of the IS-2 tank. In accordance with it, first of all, there was a high tempering at 670 ± 10 ° C with an exposure of 5 min per 1 mm of the maximum thickness section (used after removing the casting from the mold). Then, after mechanical treatment, quenching was done with heating at a temperature of 940 ± 10 ° C with holding at this temperature for 3–3,5 min per 1 mm of section, cooling in water (30–60 ° C) to 100–150 ° C. The next step is low tempering in nitrate or electric tempering furnaces with good circulation at 280-320 ° C. And finally, holding at the tempering temperature in nitrate baths for at least 4 min per 1 mm of cross-section, while tempering in furnaces, holding at least 6 min / mm.

As a result, modern armor for heavy tanks was created, allowing to fight on equal terms with the Nazi menagerie. In the future, the IS-3 will receive armor protection, which will not be afraid of a shot from the notorious 88-mm cannon in the forehead from 100 meters.

But this is a somewhat different story.

Ctrl Enter
Noticed oshЫbku Highlight text and press. Ctrl + Enter
We are
Once again about tanks, Soviet and GermanIs the "old" well forgotten to become the "new"? Part-2. At the call of honor and duty
105 comments
Information
Dear reader, to leave comments on the publication, you must to register.