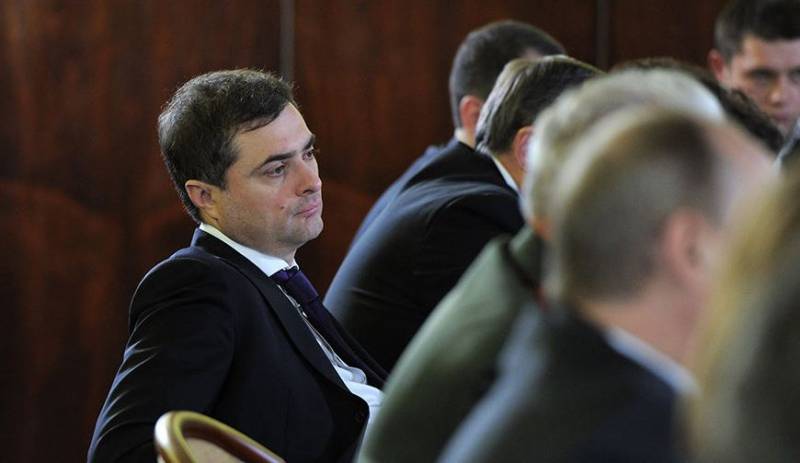 The personality of Vladislav Surkov, ex-presidential aide, is well known in Russian political circles. At the beginning of the year, he voluntarily left the political arena and suddenly began to be active again. What is the reason for this?

This man, being in the Kremlin cage since 1999 and representing the camp of Russian liberals, has made a lot of effort to form and introduce into Russian society the existing political system known as "sovereign democracy." For a long time he headed the internal policy direction in the Kremlin and proved himself to be an effective manager. He had a hand in the creation in Russia of the parties "Rodina", "Fair Russia" and "United Russia", as well as the youth movement "Nashi" to counter the color revolution in 2005.

Surkov is also well known for his failed policy of overseeing events in Ukraine and Donbass in 2013-2019. It was he who determined the power in today's Donbass republics and built relations with Ukraine.

Since 2018, he was repeatedly predicted to resign, but despite everything, he was in demand and was in his place. Everyone was surprised by his unexpected voluntary resignation immediately after Putin's speech to parliament in January this year with a new program, constitutional changes and the resignation of the liberal government of Medvedev. According to Aleksey Chesnakov, a political analyst close to Surkov, he resigned from his post because of "a change of course in the Ukrainian direction." Quite a controversial statement. Apparently, this was only an excuse, he could not fit into the innovations announced by the president and decided not to wait for his dismissal.

After the resignation, Surkov went into the shadows, and nothing was heard about him. Only in August, in connection with the events in Belarus, information was thrown in that he could supervise the Belarusian direction, but the information was not confirmed.

Surkov is not just a former employee of the Kremlin team, he is in many ways an exponent of the views of its members and one of the significant participants in the implementation of mechanisms for managing Russian society over the past twenty years. For almost a year now, no matter how busy it is, the mechanisms laid down by him continue to operate.

Surkov outlined his views on the Russian state structure and control mechanisms in his two sensational articles "Loneliness of a Half-Blood" (April 2018) and "Putin's Long State" (February 2019). In them, he discusses the special path of Russia and the hopelessness of its integration into Western civilization, the deep Russian people and the inevitability of the introduction of the “ideology of Putinism” (as a well-functioning method of ruling). At the same time, the most original of his statements: "Putin is hardly a Putinist."

What are these views, and how relevant are they now? Now, when a course has been outlined in Russia for changing the political canons laid down in the XNUMXs, when the international situation is fundamentally changing and Russia's place in the future world order is being determined.

The loneliness of a half-breed

"Now ideologies of the third way, the third type of civilization, the third world, the third Rome will be in demand."
He emphasizes that for four hundred years before False Dmitry, Russia went to the East and tried to integrate into their system of eastern rule: nothing came of it. Then she tried for four hundred years to become related and integrate into Western civilization. Dynastic marriages and wars for Western values ​​did not produce results, she was not recognized as hers.

An attempt to lean against the West through the Marxist ideology was also unsuccessful, the world revolution did not work, and Russia became the Soviet empire.

At the end of the XNUMXth century, another campaign to the West began: with an almost halving of the territory, population, industrial and military potential and Russian ambitions - to the level of an average European country. But even with such a belittled role, Russia did not fit into the framework of the West.

According to Surkov, in 2014 Russia completed its epic journey to the West, and then the stage of its long geopolitical loneliness began. However, Surkov's assertion that Russia, having returned Crimea, stopped halfway and, fearing the shout of the West, did not fight for its ancestral territories of Novorossia is controversial.

According to the author, Russia is not an Eastern or Western, but an independent civilization. She is a half-breed country. She is everywhere - a relative and nowhere - not native. As befits a half-breed: charismatic, talented, beautiful and lonely. In its loneliness, it can become a leading nation, before which "other peoples and states are parted, step aside and give it a path." She will evoke fear and hatred, curiosity, sympathy, admiration - and at the same time achieve her goals.

The ideas outlined in the article are basically true: Russia has not yet decided on its own way of further development, and the "third way" offered to it is in no way justified. After all, the meanings and ideas in the name of which Russia should implement it are not indicated. It can also be assumed that this article was written in order to keep the author's place on the political Olympus, since at that time the presidential elections had just taken place, and a new team was being selected.

In the second article, Surkov discusses the system of power established in Russia. He believes that the country should be ruled by a sole leader based on the "ideology of Putinism," and political institutions should be decorative.

In summary, the main ideas of the article are as follows.

After the disastrous 1990s, Russia abandoned the ideological chimeras of the West, began to produce meanings and build its own, special, sovereign version of democratic development.

While everyone was talking about globalization, the Munich speech declared sovereignty and national interests, the disintegration of Russia was stopped. Having collapsed from the level of the USSR to the level of the Russian Federation, Russia began to recover and returned to its only possible state of a great, growing and land-gathering community of nations. The special role assigned to Russia does not allow it to leave the geopolitical scene and determines the complex nature of its statehood.

As a state of a new type, Russia took shape by the mid-XNUMXs, and it is this model of political structure that is the most effective means of survival and the rise of the Russian nation in the coming years and, most likely, for the entire coming century.

The high internal tension associated with the retention of huge heterogeneous spaces turns the military-police functions of the state into the most important and decisive ones. The task of any state is to be a weapon of defense and attack.

There is no deep state in Russia, but there is a deep people. With his gigantic supermass, he creates an irresistible force of cultural gravity, which unites the nation and attracts the elite to their native land.

The political machine created in Russia is built on the ability to hear and understand the people, see through them and act adequately to the people, which is effective and durable. All institutions are subordinated to the main task - confidential communication and interaction of the supreme ruler with citizens. The various branches of government converge on the personality of the leader. Political institutions taken from the West are sometimes considered in our country to be partly ritualistic, established more in order to be "like everyone else." In essence, society trusts only the first person.

The system built in Russia is only gaining momentum, its full capacity is far ahead, and it also has significant export potential.

It is necessary to realize, comprehend and describe the system of power and the whole complex of ideas of "Putinism" as the ideology of the future. Precisely the future, since the real Putin is hardly a "Putinist".

The article contains many controversial and unsubstantiated statements about the future of Russian society. Does Russia need such a political system where everything is subordinated to "confidential communication with the supreme ruler" and he determines the future of the people and the country? The "ideology of Putinism" is also far-fetched. There is no idea in this definition. An ideology calling the nation into the future should not presuppose “confidential communication”, but something else, which requires a separate serious discussion.

Promoting the "ideology of Putinism"

Surkov did not stop there. He decided to promote this ideology on Chesnakov's site "Actual Comments", where a corresponding section was introduced to analyze the ideas he proposed.

Just before his resignation in October 2019, Surkov posted his considerations there, in which he called “Putinism” a global political life hack and a well-functioning method of ruling, and also encourages everyone to investigate it as a working ideology of everyday life.

The discussion did not go well, Surkov's ideas did not find a response in society, and soon Putin made his landmark address to parliament, and other ideas began to be discussed in society.

Surkov is not the kind of person who has been in the shadows for a long time. And already in the fall, information begins to circulate on the Web that on October 31 in the Moscow region a congress of the Union of Donbass Volunteers (SSD, created by Surkov in 2015) will take place, at which the union of the Union and the Rodina party will be announced. Surkov made another call to promote his (or the clans behind him) ideas.

The congress took place, Surkov was present at it and did not appear in front of the media. So far, only announced the joint activities of the SDM and the Rodina party, and the process of forming a new political force has begun.

The time has been chosen very well: the international situation is heating up, the authorities will have to decide in many directions, including internal ones. Support for the United Russia party in power is weakening, and new patriotic parties and forces are needed on the political field, ready to compete with it and support the government.

It should be noted that since February of this year, the second new patriotic project, the party of Zakhar Prilepin "For the Truth", has also begun to unfold. But due to its vague political agenda, this project did not receive a worthy development and failed in the local elections in September. Now (instead of Prilepinsky) Surkov is trying to propose his own project and revive the previously well-known Rodina party by uniting it with militias from the Union of Donbass Volunteers. It is too early to say to what extent the new political force he is forming will perceive the “ideology of Putinism” proposed to it and whether it will be in demand by society. Surkov is a talented manager, but the success of his brainchild depends not only on him personally, despite his colossal experience in political and undercover struggle.

These two political projects are competitors in the patriotic field. And, most likely, it is between them in the coming year that the struggle for a patriotic niche will unfold.

Unfortunately, there is no real patriotic force on the horizon that can adequately defend Russia's interests.

Ctrl Enter
Noticed oshЫbku Highlight text and press. Ctrl + Enter
We are
List of destroyed the largest and most high-tech enterprisesChechen trace of Mr. Surkov
82 comments
Information
Dear reader, to leave comments on the publication, you must to register.