"The Prince's Carabiner" and "Monkey Tail" by Westley Richards 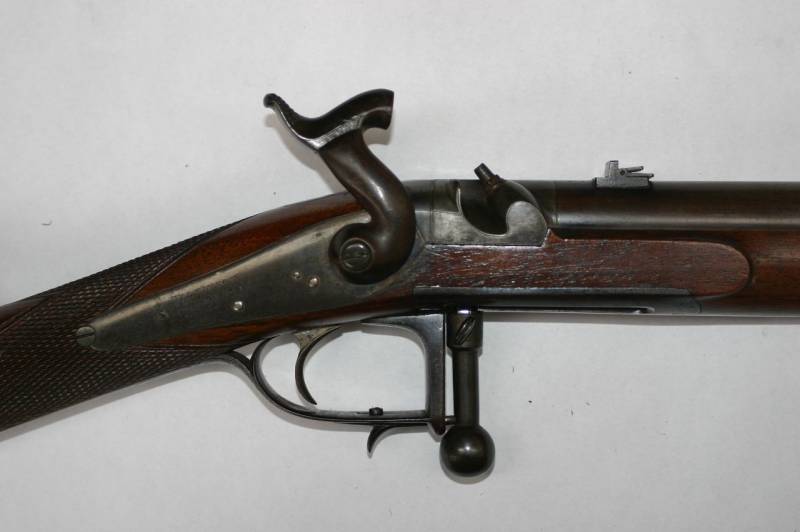 Military affairs at the turn of the eras. A series of articles about carbines of the US Civil War aroused great interest among VO readers. By the way, it was very interesting for me to work on it myself, although I had to shovel a bunch of English-language sources. But many VO readers immediately pointed out to me (and quite rightly!) That the topic should be continued, giving a description of similar species weapons, which at the same time took place in Europe. And ... I fulfill the request of VO readers!

Let's start with the fact that the 50-60s of the XIX century were peaceful in Europe. The armies are large, the weapons are standardized. Some promising samples were developed over the years, and their service life was calculated for decades. And no one was surprised at this. Everyone believed that this was how it should be! And nevertheless, new items appeared. 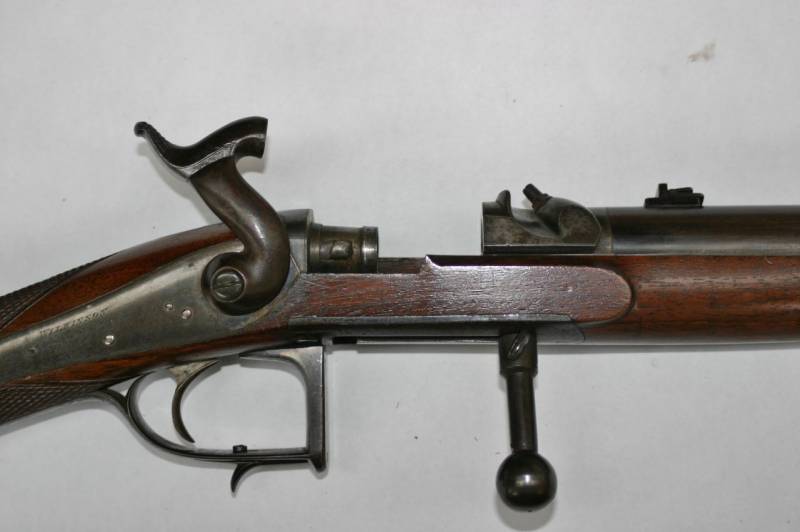 Frederic Prince's carbine, prepared for charging
So, in February 1855, the London gunsmith Frederick Prince patented an unusual system for loading a gun from the breech. The prince offered his rifle to the Artillery Council. In his trials at the High School of Shooting, he surpassed the rival Anfield musket (1853) in the same year. However, the Council refused to consider the possibility of adopting the new system, considering it too complex and expensive to manufacture. 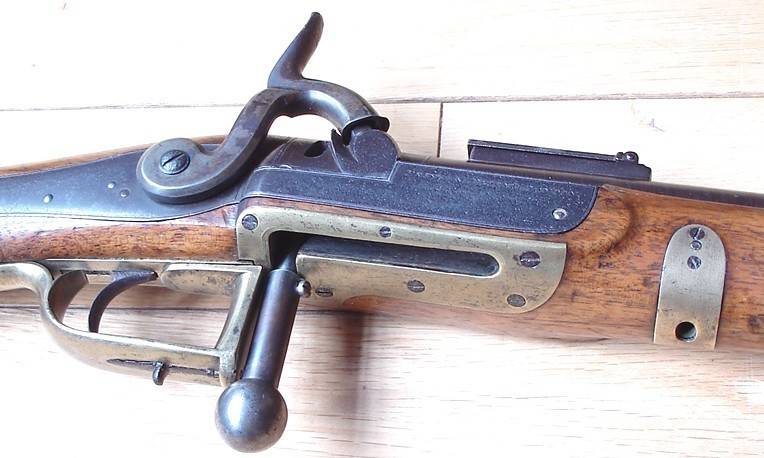 Prince's carbine in .577 caliber. The photo clearly shows the device of the shutter mechanism

What was so complicated there and what were the advantages? The prince used a movable barrel, which opened the breech when moving forward and thus allowed a paper cartridge to be inserted into it.

Once the hammer has been fully cocked, the rifle is ready to fire. To charge it, the weapon had to be half-cocked. Then unlock the bolt handle by pulling back its curved part, which protruded beyond the guard of the trigger guard. Further, the shutter handle had to be slightly turned to the right, and release the two lugs that blocked the shutter. Now all that was left was to push the bolt forward along the short L-shaped channel inside the box. This opened the bolt, allowing the shooter to load the paper cartridge. After that, the bolt handle was pulled back and turned again to the left to fix the locking lugs. After that, the bolt handle, together with the protrusions inside the receiver, kept the bolt locked during firing.

It all sounds a little complicated, but in fact the mechanism worked quite simply: the trigger is half-cocked, the primer is put on, the handle is to the right, then forward, the cartridge is in the barrel, then the handle is back and left, the trigger is fully cocked and ... shoot! 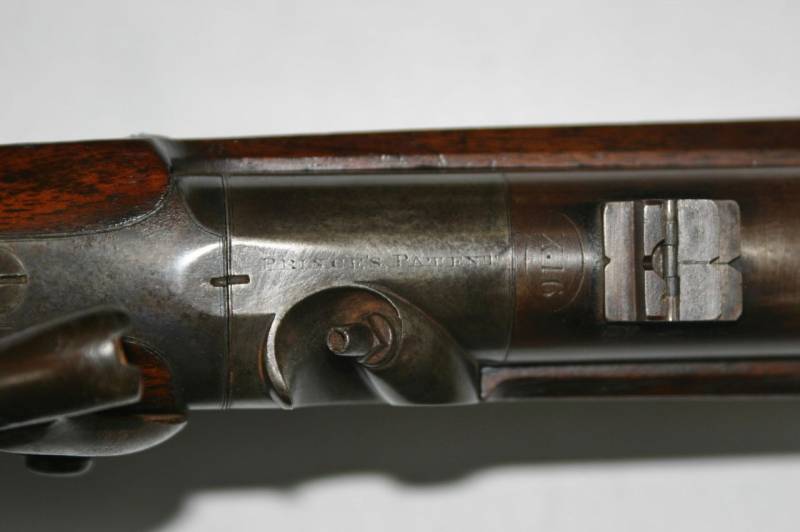 Brandtube and scope
During the tests, the Prince's rifle was able to fire six shots in just 46 seconds, with 120 shots in just 18 minutes made by the Prince himself. The prince also fired 16 shots, aiming at a standard piece of stationery from 100 yards away. Trials at Hight also showed that his rifle had better accuracy than Anfield at 300 yards.

Unsurprisingly, as early as 1859, a group of prominent London gunsmiths, including Joseph Manton, Henry Wilkinson, Samuel Nock, Parker Field and Henry Tatham, approached the Armaments Council. with a request to reconsider his decision regarding the Prince's rifle.

The appearance of the Prince's carbine
Specimens have survived to this day with barrels ranging from 25 to 31 inches, most of which have three or five grooves. The rifles were produced in various calibers - from standard (for the British army .577) to guns for hunting deer and rabbit (.24 and .37 caliber). Due to the diversity of manufacturers, rifle scopes vary greatly, ranging from simple dovetail plate sights to more sophisticated ladder scopes, and there is even a series with folding aperture (ring) scopes.

It can be argued that by refusing to adopt the Prince's system, Great Britain missed an opportunity to get ahead in the field of arming its infantry. And again, it took a war for the rearmament of the British army to get off the ground ... 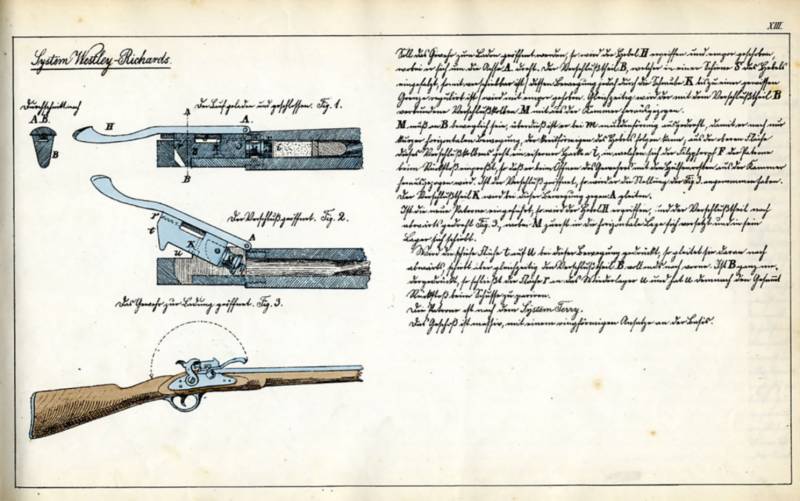 Westley Richards shutter circuit
However, if not for the entire army, then, at least for the cavalry, the British nevertheless adopted a carbine that was loaded from the breech. It was Westley Richards' famous monkey tail, which appeared in 1861 and produced 21 copies. 000 were produced by Westley Richards himself and 2 by the state arsenal in Enfield. Many thousands more were made for the civilian market and for export to other countries. 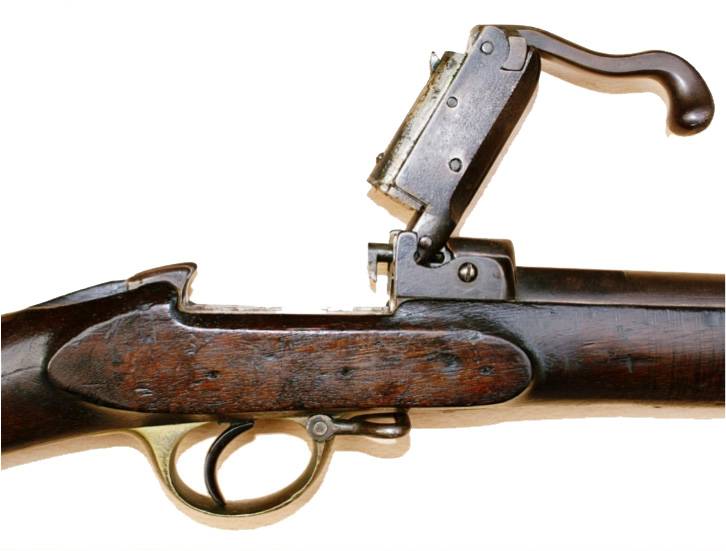 Westley Richards open bolt carbine. Apparently, because of such a strange handle, he got his unusual nickname ...
History it began ... as early as 1812, when William Westley Richards, Sr. founded a firearms company that quickly became famous for its excellent craftsmanship and innovative design. When his eldest son Westley Richards joined the company in 1840, she found a creative genius in him that elevated it to the status of "London's Best Gunsmiths". Prolific Inventor: Westley Richards received seventeen patents from the British government in 32 years. The most famous of these was the breech loading system, informally called the "monkey tail".

Note: Monkey tail is a stable English expression for something with a curl at the end. 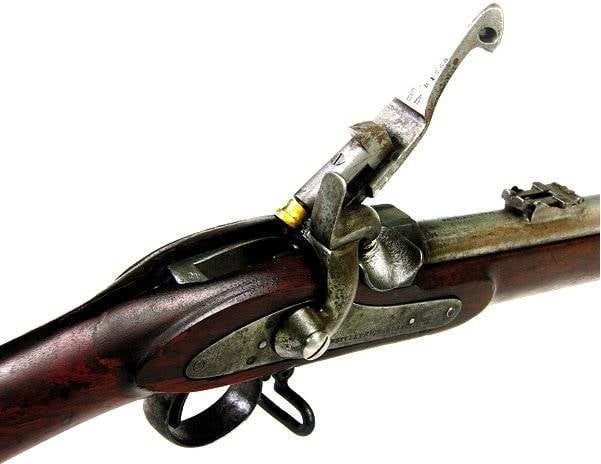 "Monkey's tail" on the tail ... not similar. The shut-off piston of the bolt, made of copper, is clearly visible
As with the American Joslyn rifle, the fancy nickname comes from the elongated bolt handle that was recessed into the top of the frame behind the trigger. While the hammer is not cocked, you can raise the lever up, and thus open the breech of the barrel. The shooter inserted a paper cartridge with a felt tray and lowered the "monkey's tail". In this case, the bolt piston pushed the cartridge into the bore and closed it. The hammer is cocked, the capsule is put on the hose, and the carbine is ready to fire. As an additional safety measure to ensure that the bolt remains closed, the bolt was designed in such a way that the pressure of the powder gases in the barrel, when fired, moved the piston backwards, while also blocking the bolt.

Westley Richars carbine, adopted by the British army
Richards' innovative approach was also associated with the polygonal rifling system proposed by the industrialist Isambard Kingdom Brunel, who developed it in collaboration with Joseph Whitworth, a famous artillery engineer who ordered his first "sniper" rifles from Westley Richards. The only difference was that Whitworth's rifled barrel was hexagonal, Brunel's was octagonal, and it becomes more and more twisted from the breech to the muzzle. Like Whitworth's rifling, Brunel had twice the traverse speed of his contemporaries - one revolution per 20 inches. But unlike the Whitworth rifle, which needed a six-sided bullet, Richards rifles fired conventional cylindrical bullets that pressed into the rifling and slid along the surface of the octagonal barrel. And then it happened that Richards asked Brunel, who did not like to get involved with patents, would he allow him to use Whitworth's patent in his rifles? Brunel agreed, and Richards stamped Whitworth's patent on their barrels. It was a cunning business move, since by this time everyone already knew about the amazing accuracy of the Whitworth rifle.

Westley Richards carbine chambered in 1869 metal cartridge. In this sample, the bolt was lowered by a lever "flowing around" the trigger bracket
The British War Office was not prepared to give up its 1853 Enfield Pattern 1853 Rifled Musket / Pattern 1853 Enfield / P53 Enfield / Enfield Rifled Musket. But it nevertheless ordered two thousand 19-inch monkey-tail carbines for the 10th and 18th Hussars and the 6th Dragoon Guards Regiment. And nineteen thousand 20-inch carbines, intended for the Yeomenri regiments and the colonial cavalry, were produced at the Royal Small Arms Factory (RSAF) in Enfield (United Kingdom).

Then he received an order for two thousand 36-inch rifles from Montreal. Equipped with bayonets, they were intended to suppress the Fenian uprising in Canada.
The company received an even more substantial order from Portugal, where it sold another twelve thousand rifles, carbines and monkey-tail pistols.

Westley Richards 39-inch rifle, 1881 side-lever
Westley Richards' Monkey Tail continued to hold its ground even after unitary rounds made percussion primers obsolete. Thus, rifles with a 24-inch barrel became popular among the Boers in the 1880s. Unable to purchase metal cartridges, the Boers used homemade black powder cartridges, and in extreme cases, they could even be loaded from the muzzle! The Boers themselves believed that their accuracy was quite consistent with the new Martini-Henry rifles used by the British.

“Boer boys are said to learn to shoot at an early age and are not considered skilled until they can hit a hen's egg 100 yards away with a monkey tail rifle.
It's hard to say which is more: truth or advertising, but in any case, how many years these rifles have been used speaks volumes. 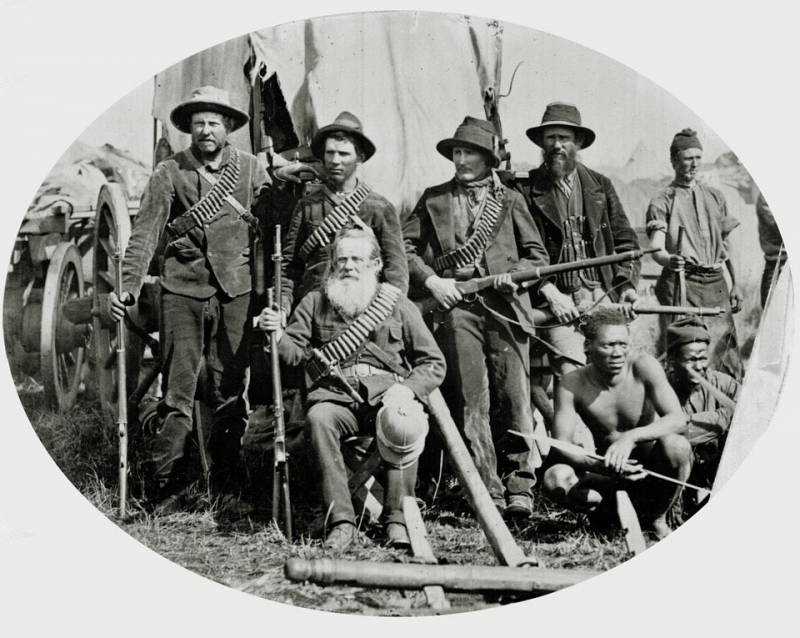 Boer Archers, many of whom have fired Westley Richards rifles for decades!