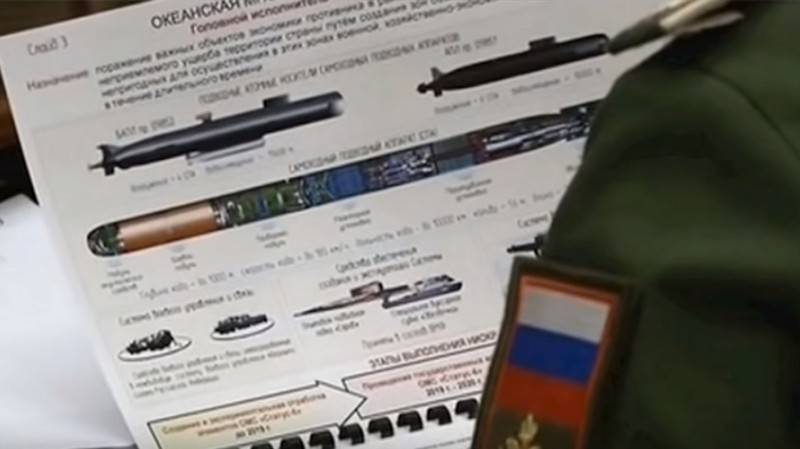 The first full-time carrier of Poseidon strategic drones - Project 09851 Khabarovsk special-purpose nuclear submarine - will be launched in the first half of 2021. This was reported by TASS with reference to a source in the military-industrial complex.

The withdrawal of the Khabarovsk submarine from the Sevmash shipyard is planned for the spring - summer of next year. Then the factory sea trials of the submarine will begin.
- Said the source agency.

There is no official confirmation of this information. Earlier, some Russian media, citing their own sources, reported that the launch of the Khabarovsk nuclear submarine of project 09851 will take place in the spring or summer of 2020, and its entry into the Russian Navy is scheduled for 2022.

It should be noted that the Khabarovsk nuclear submarine will be a regular carrier of unmanned underwater vehicles and, according to unconfirmed reports, will be able to carry at least six Poseidons on board. At the same time, Project 949A Antey, the multipurpose nuclear submarine Belgorod, specially converted for Poseidons and launched on April 23, 2019, will be an experimental carrier.

The Khabarovsk project was developed at the Rubin Central Design Bureau (TsKB), the submarine itself was laid down at Sevmash in July 2014. The technical details of the project are not reported.

The Poseidon strategic submarine is designed to engage a variety of targets, including carrier groups and coastal fortifications. The apparatus is equipped with a nuclear power plant. It is capable of diving to a depth of over 1 km and has an unlimited range. It can be armed with a 2 megaton nuclear warhead.

Note that earlier it was reported about the plans of the Ministry of Defense to adopt up to 32 underwater unmanned vehicles "Poseidon", in the future, build four underwater carriers for them. According to the plans of the military department, two submarines with drones should be deployed in the North and Pacific fleets.
Ctrl Enter
Noticed oshЫbku Highlight text and press. Ctrl + Enter
We are
The timeline for launching the Poseidon carrier - the nuclear submarine Khabarovsk became knownThe native carrier "Poseidons" will be launched before the end of the year
187 comments
Information
Dear reader, to leave comments on the publication, you must to register.