The arrest of the former head of Kosovo, Hashim Thaçi, is a farce, an echo of terrorist attacks in Europe or a demarche against the United States: options and consequences 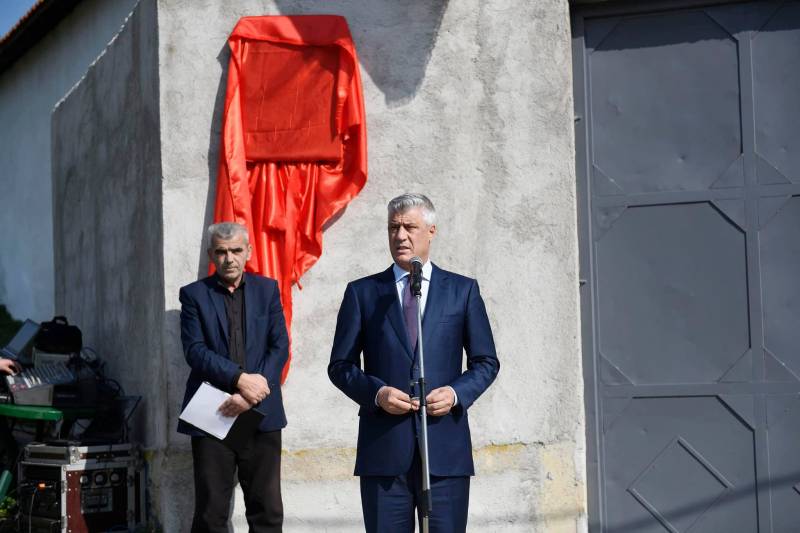 The politically sensational approval by the Special Court in The Hague of the indictment against the President of the unrecognized Republic of Kosovo, Hashim Thaci and his associates, as well as the voluntary resignation of this politician, followed by his arrest, give rise to many questions. First of all, as to why this long-awaited event for many victims of militants happened right now. The options for further developments are no less intriguing. Will they turn into another farce or will justice prevail?


Let me remind you: on November 5, the leader of the self-proclaimed Kosovo entity formally resigned, calling on local political forces "to unity for the sake of preserving sovereignty". Immediately after that, Hashim Thaci, together with two associates - Qadri Veseli (ex-speaker of the Kosovo parliament) and Recep Salim, against whom similar charges are being brought, flew to The Hague, where he was brought before members of the Special Court for Kosovo. It is not known what the militant who tried to "repaint" in a respectable politician hoped for, but on November 6 both he and three other compatriots (in addition to the above-mentioned persons, we are also talking about the former chairman of parliament Yakup Krasnici) ended up behind bars.

As it became known literally the day before, Tachi's primary appearance in court as an accused should take place on November 9. According to the press service of the Special Court, the purpose of the upcoming public hearings on this day will be to establish the fact that the ex-president is clearly aware of the charges against him and is sufficiently aware of his own rights.

Meanwhile, according to information from the Serbian media, officers of the Special Prosecutor's Office of the International Criminal Court for Crimes in Kosovo, together with colleagues from the EU rule of law mission and with the participation of local police, are already conducting searches at the place of residence of the accused. First of all - in the house of Thaci himself, located not far from Pristina, in the town of Chaglavitsa.

It must be assumed that one of the founders of the infamous Kosovo Liberation Army, which is fully "famous" for the bloodiest and most serious atrocities - from ethnic cleansing to the organization of human and drug trafficking, is very well aware that he can be charged with guilt. The corresponding judicial act, containing a dozen points, deals with crimes against humanity committed by him and his accomplices "at least" from the spring of 1998 to the autumn of 1999. Torture, murder, persecution of people for political reasons and because of their ethnicity ... Veseli with Salim and Krasniqi will have to bear responsibility for the same actions.

The "field commander" who has soared to the very top has a "track record" so rich that even if the subject of the trial becomes its hundredth part, the sentence, even with minimal objectivity, should be very harsh. According to some experts, the only thing Tachi may be counting on is the mitigation of the charges due to the expired statute of limitations. However, the case for the most part involves such grave and resonant crimes that this principle can hardly be applied to them.

In this regard, it becomes not entirely clear - what could have pushed a hardened thug, whose hands are stained with the blood of at least hundreds of civilians, and a hardened political intriguer into the "embrace" of European justice? So far, only a version seems to be relatively plausible, within which Thaci was offered a choice, where a courtroom and a prison cell seemed to be the best option. It is unlikely that he was given any guarantees regarding freedom - and he probably would not have believed them. Only the principle of intimidation with something even more frightening could work here.

It is no less interesting why the numerous Western curators of the "Kosovo Republic", from whose submission it was created, existed all these years, and whom Hashim Tachi as its leader was quite satisfied with, despite his terrible past, suddenly showed "adherence to principles" right now? Some people see in what is happening the European Union's response to the recent frequent incidents of terrorist acts and attacks carried out on its territory by Muslim extremists. Perhaps this is a warning to all leaders of Islamist organizations about what will be asked of all of them - and when they least expect it.

Another option is also possible - the EU is in a hurry to "deal with" Thaci, who has turned into a completely toxic figure, while his main patrons, the United States, are not up to the events in the Old World? It may very well be - after all, the ex-president and similar "politicians" with an extremely dirty reputation and hands up to the elbows in Serb blood by their very existence interfered with the reconciliation of Belgrade and Pristina, becoming on the path of Serbia's European integration. That, in the opinion of many in Brussels, was precisely what “pushed towards Moscow” this Balkan country.

It is also possible a farce, when, after Thaci's arrest, court hearings will follow, following which the war criminal will be acquitted.

In short, so far only one thing can be stated with certainty - we see before us not so much justice as big politics. What is the real goal of those who are pursuing it in the Balkans (in the same Kosovo) today - will show in the near future.