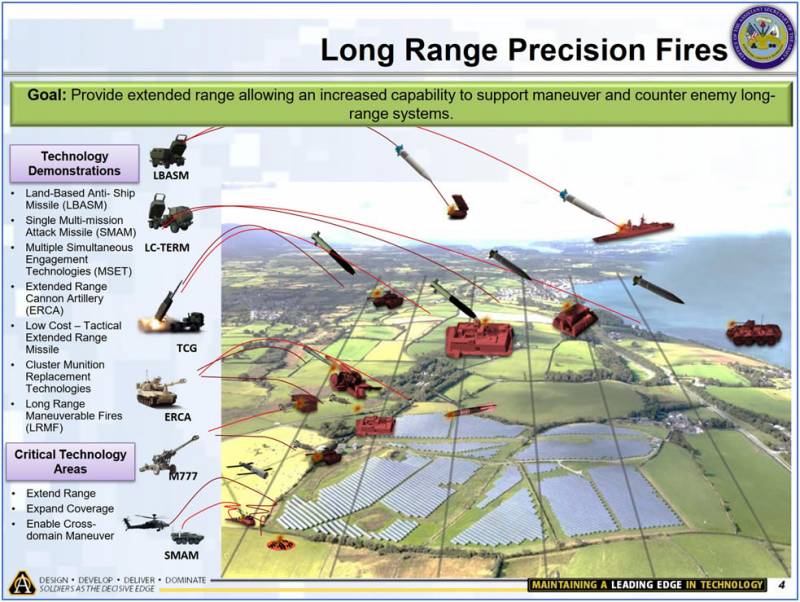 The use of a variety of fire weapons to engage targets in all environments. US Army graphics

On November 4, an article by Peter Ong appeared in the online edition of Naval News "Analysis: 155mm Wheeled Mobile Howitzers Could Become Anti-Ship Artillery" ("Analysis: 155mm wheeled self-propelled guns can be anti-ship artillery"). As the name implies, the topic of the publication was the possibility of returning self-propelled artillery to coastal defense. It is noted that this concept is not new, but modern technologies and products will dramatically increase the potential of coastal artillery.

It is noted that most of the developed countries use mobile coastal missile systems to protect the coast from enemy ships. They allow you to keep the enemy at distances of hundreds of miles from the coast and provide a high probability of hitting the designated target. At the same time, the ammunition load of the launcher is usually limited, after which reloading is required with the participation of a transport-combat vehicle - also carrying a small number of missiles.

Such coastal defense is capable of holding back or hitting a limited number of ships, but a large assault force will simply overload it. The missile systems will spend their ammunition, after which the coast will be left without protection, and the enemy will successfully land or deliver a missile strike. 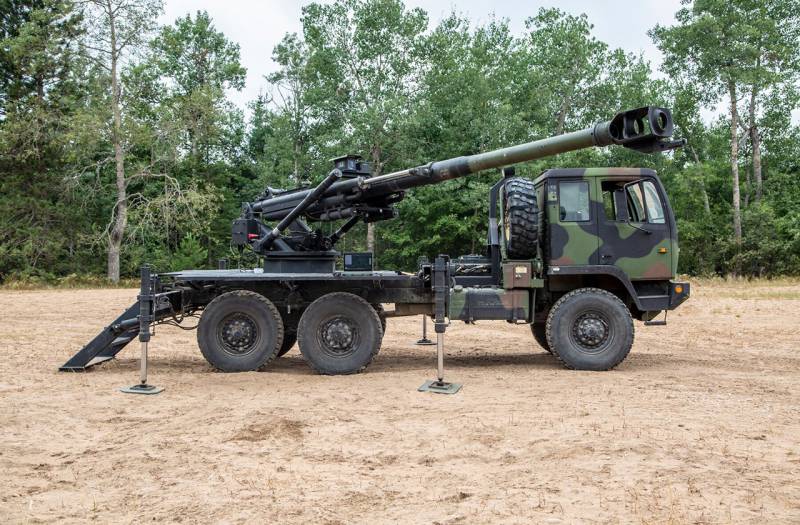 ACS Brutus. Photo AM General
Modern self-propelled artillery is distinguished by its high rate of fire, automatic preparation for firing, significant ammunition load and high mobility. In addition, modern fire control and ammunition allow you to get a high percentage of hits on moving targets.

These qualities and capabilities attract the attention of the armies, and in the future may interest the coastal troops. The relatively large ammunition load, made up of guided missiles, allows the effective use of self-propelled guns against ships or landing craft.

Modern self-propelled artillery combines a range of advanced technologies to ensure high efficiency. In addition, it allows completely new tasks to be solved. In this context, Naval News recalls the September trials in the United States, when the M109A6 self-propelled gun, using an HVP projectile, shot down an unmanned target-simulator of a cruise missile.

Thus, an ACS with modern guided ammunition, using external target designation from various sources, is capable of striking stationary and mobile ground and surface targets and even fighting some air targets. This artillery potential must be used in the concept of a "multi-domain operation". ACS should be one of the means of fire and ensure the solution of those combat missions in which it is able to show the best results. 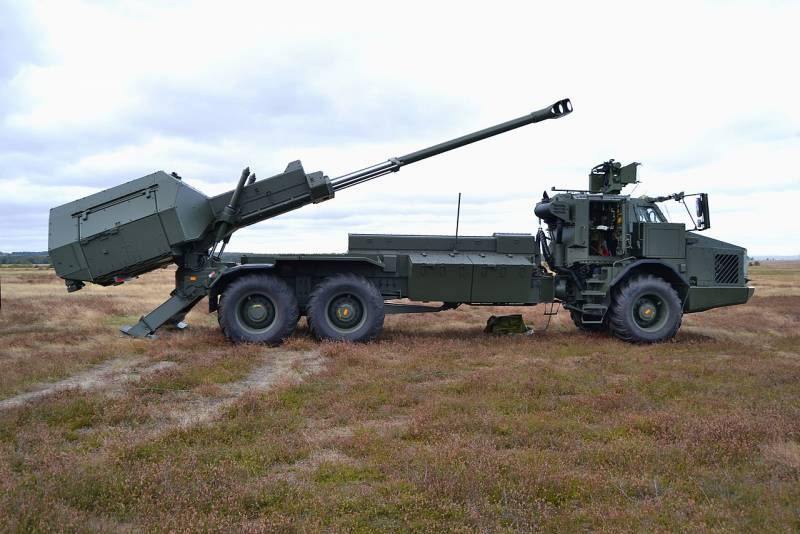 ACS Archer on a Volvo chassis. Photo Wikimedia Commons
It is noted that the USMC and the marines of other countries have long abandoned self-propelled artillery in caliber up to 155 mm. Instead, towed systems are used with the ability to transport by air. However, modern technologies and products may interest the ILC, which will lead to the restoration of self-propelled units.

P. Ong recalls that in June 2020, the US ground forces published a "request for proposals" for a promising 155-mm self-propelled howitzer on a wheeled chassis. It should become a more mobile addition to the existing tracked self-propelled guns of the M109 family and give the army new opportunities. There are several existing designs that meet the army's requirements in general, but Naval News is considering only two of them.

The first is the Brutus ACS from AM General. This project provides for the open installation of an M776 howitzer with an improved gun carriage on an FMTV vehicle. The carriage is equipped with original anti-recoil devices, which provide a shot when rolling, which reduces the recoil impulse. There are modern fire controls.

The Brutus has a mass of 14,8 tons, is serviced by a crew of 5 and can fire at a rate of up to 5 rounds per minute. (steady rate of fire - 2 shots / min.) The maximum firing range of an active-rocket projectile is 30 km. Ammunition is transported by a separate truck and transferred to the ACS right during firing. 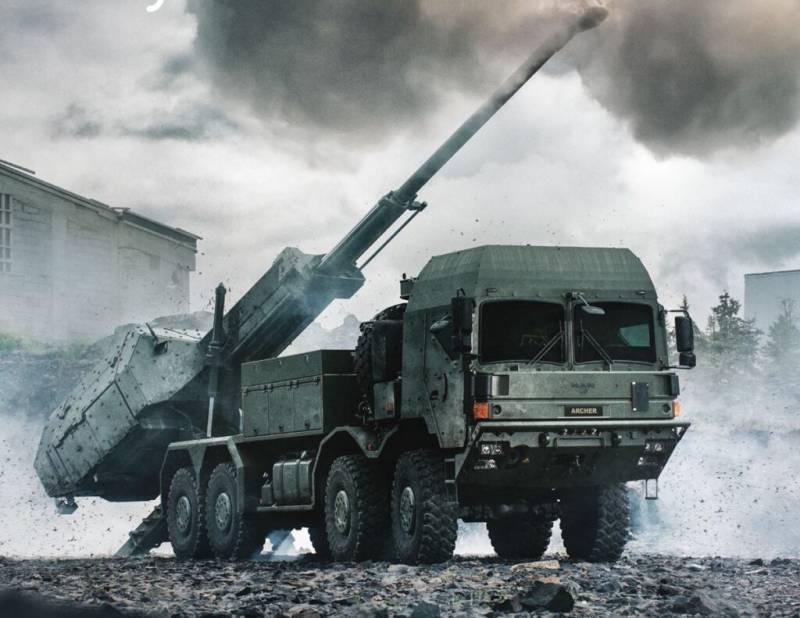 "Archer" on MAN chassis. Photo BAE Systems
The Brutus product is currently undergoing testing and has already attracted the attention of the US ILC. At the same time, orders for production for the American army have not yet been received, but the developer company is optimistic.

At the beginning of next year, tests of the Archer ACS from BAE Systems will begin at the American proving ground. This is a wheeled combat vehicle on a chassis of the required type (the original version was built on the Volvo A30D platform) with an original automated combat module. A 155-mm gun with a 52 clb barrel is used; it is possible to use another barrel group.

The Archer combat module is equipped with a built-in 21-shot magazine and an automatic loader. The rate of fire reaches 8-9 rds / min. Shooting by the MRSI method is possible. Range with an active rocket projectile - up to 50 km; declared the possibility of increasing the range by using promising projectiles or even by replacing the gun.

Both samples under consideration show sufficiently high characteristics and have the potential for modernization. Due to their high mobility and available fire characteristics, they can find application not only in the army, but also in the marines, which in the United States is responsible for coastal defense. 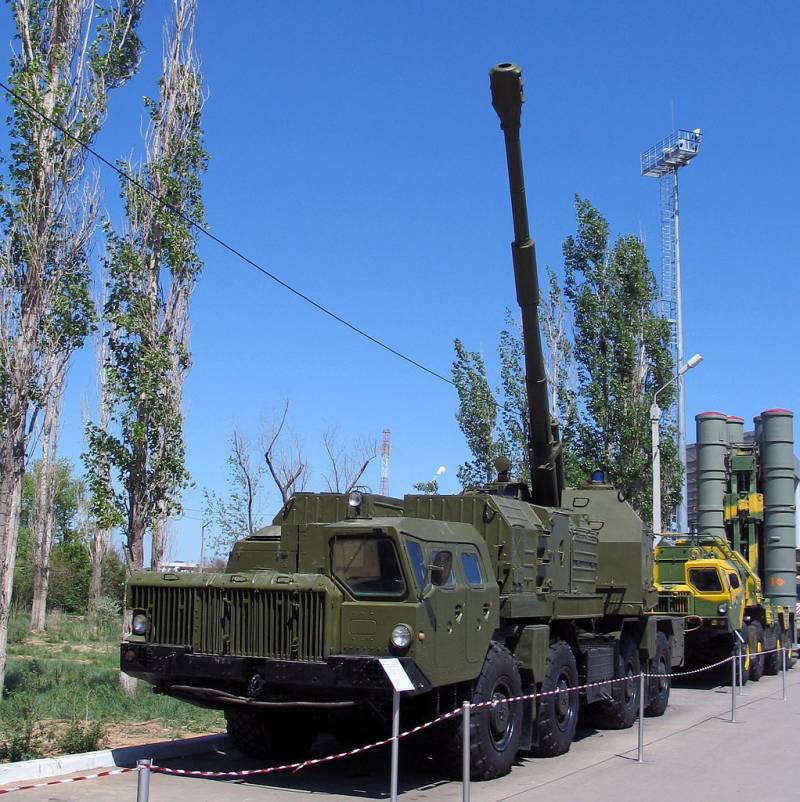 Self-propelled gun mount from the A-222 "Bereg" complex. Photo Wikimedia Commons
Naval News indicates that the simultaneous deployment of coastal missile systems and self-propelled artillery installations will create an effective echeloned defense system. In this case, howitzers will use relatively cheap projectiles against surface and air targets within a radius of tens of kilometers, and anti-ship missiles will provide defense at long ranges.

An important factor in this context is the mobility of the self-propelled guns and its ability to quickly switch to a combat or traveling position. Due to this, it will be possible to carry out a maneuver taking into account the changing situation, increasing the effectiveness of artillery.

All this shows that in the construction of coastal and anti-amphibious defense it is now necessary to use not only anti-ship missiles. Self-propelled artillery is also capable of having its say - and moving between positions, quickly throwing high-precision shells at the enemy.

An article in Naval News raises an interesting question and even suggests possible solutions. At the same time, giving examples, the online edition forgot the most obvious and striking example. The Russian Navy's coastal forces have been in service for several decades with a specialized artillery complex A-222 “Bereg”, designed to combat ships and amphibious assault vehicles. It clearly shows exactly how a modern coastal SPG should look like. 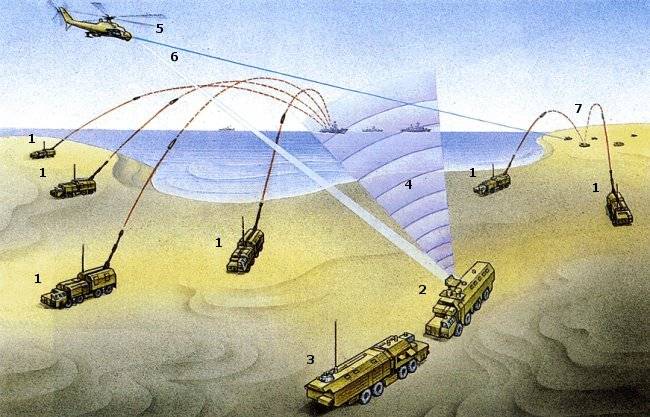 The principles of combat operation of the "Bereg" complex. Figure Armor.kiev.ua
A-222 includes a self-propelled central post with a radar for target detection and control over the results of firing, 4-6 self-propelled artillery guns with automated 130-mm guns and duty support vehicles. "Coast" independently finds surface targets at ranges of up to 30 km, generates data for firing and attacks objects at a distance of 23 km. The rate of fire of one combat vehicle is up to 12 rds / min. The ammunition load includes several types of high-explosive and anti-aircraft shells. The standardized four-axle chassis allows for quick entry and exit.

Complex "Coast" is capable of hitting surface targets at speeds up to 100 knots, air and coastal objects with known and unknown coordinates in advance. He can act independently or according to external target designation.

The A-222 artillery system demonstrates the fundamental possibility of creating a highly effective coastal defense weapon, even using technologies from previous years. Using modern developments and larger caliber guns, in theory, an even more formidable weapon... Moreover, it is not necessary to create a complete complex from scratch; it is quite possible to improve the actual means of reconnaissance and control in order to integrate the finished ACS into the contours of coastal defense.

Thus, practice has long confirmed the correctness of the conclusions of the author of Naval News. Indeed, both howitzers and missiles are needed to fully protect the coast - and the efficiency of the multi-component echeloned defense has been confirmed in practice. However, it is unclear whether the US command will heed such advice and whether self-propelled coastal artillery will be returned to service.

Ctrl Enter
Noticed oshЫbku Highlight text and press. Ctrl + Enter
We are
Light forces of the Navy. Their significance, tasks and ship composition"Svetlana". History of creation
49 comments
Information
Dear reader, to leave comments on the publication, you must to register.