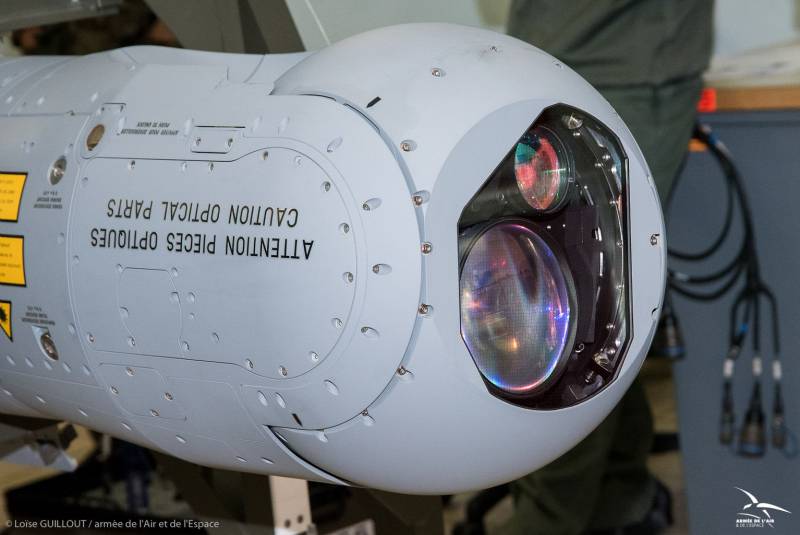 In November 2018, a new TALIOS suspended container manufactured by the Thales group of companies was adopted by the French Aerospace Forces. Currently, supplies of serial products are underway, and combat units are mastering them. At the end of October, the Aerospace Forces announced new successes in this direction. The first containers have been brought to the stage of initial operational readiness and are now entering full operation.

From design to application

The PDL-NG was considered as a more advanced and modern replacement for the existing Damocles container, compatible with several types of fighters. The French Aerospace Forces were supposed to use such containers on Rafale fighters, and to expand export capabilities, it was necessary to provide for compatibility with Mirage 2000 aircraft.

In 2016-18. Thales and the Aerospace Forces conducted all the necessary tests of the new container, according to the results of which it was put into service. In November 2018, a corresponding order appeared, and soon the first serial products entered the troops. Container deliveries are ongoing and will continue in the coming years. 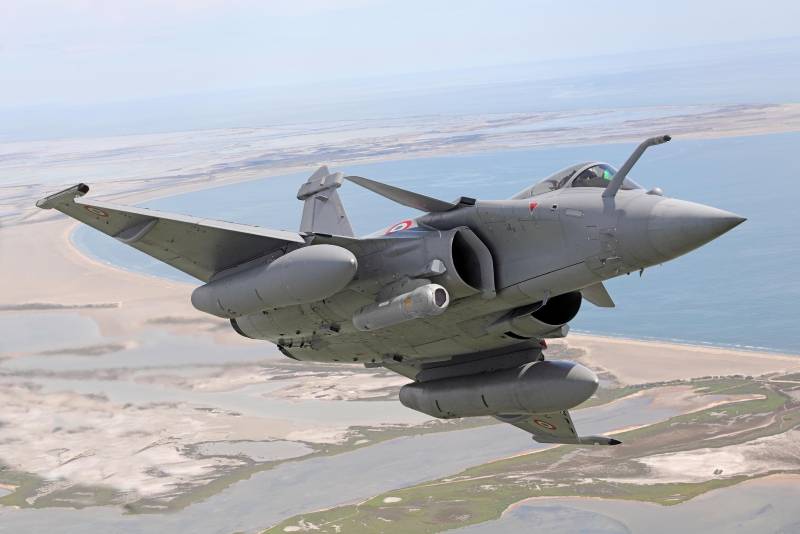 On October 29, the French Ministry of Defense announced new successes. In an unnamed squadron manned by the Raphael, the TALIOS containers have reached initial operational readiness. This allows the use of such a technique in full-fledged combat operations. In the foreseeable future, containers of a new type will be used together with Damocles products, but will replace them in the future. Current plans provide for the gradual re-equipment of all fighter-bomber units with new containers.

The Thales TALIOS sighting container was created taking into account the operating experience of the previous Damocles product. The latter was criticized for the lack of a "daytime" optical channel and other shortcomings. In the new project, all these wishes were taken into account, thanks to which TALIOS is distinguished by wider capabilities and increased tactical and technical characteristics.

The TALIOS container is made in a cylindrical body approx. 1,8 m, the head of which is given under the movable casing of the optoelectronic unit. The container is suspended on a standard carrier aircraft pylon and connected to it using a standard bus. An open architecture is announced to facilitate future upgrades. The product is fully integrated into the aircraft sighting and navigation system and expands its capabilities. 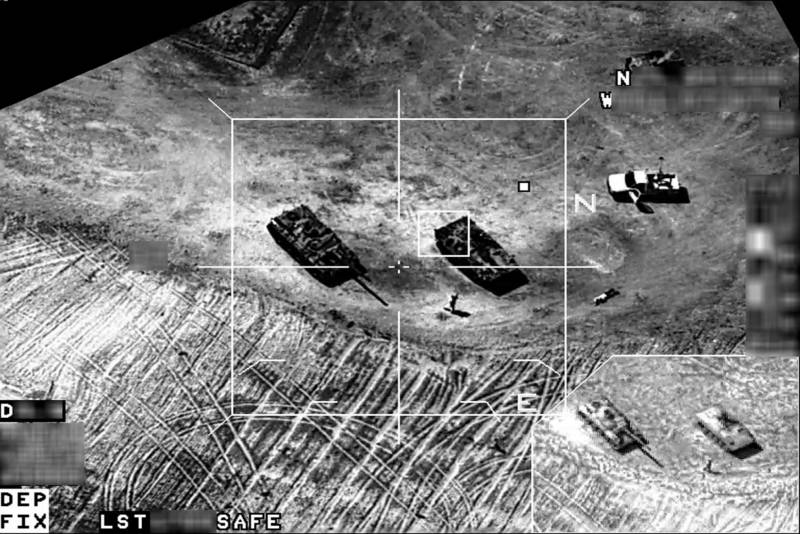 The main innovation of the TALIOS project is a daytime camcorder with electronic image enlargement. The field of view changes smoothly from 7x5,5 degrees. up to 0,77x0,58 deg. The day channel provides observation, search for targets and shooting in the entire range of weapon ranges. At the same time, the observation range of a daytime camera is higher than that of a thermal imaging channel. This is the reason for the main advantages of the TALIOS container over the previous Damocles.

Also used is a mid-range IR camera (3-5 microns) with electronic zoom, changing the field of view from 4,8 x 3,6 degrees. up to 1x0,75 degrees. With the help of such optics, observation and detection is provided in the dark, in difficult weather conditions and in other situations that make it difficult to use daytime optics.

TALIOS is equipped with a multifunctional laser system. It is used as a rangefinder and designator for weapons. In addition, the optics of the container can fix someone else's illumination for third-party target designation.

The container provides real-time HD images and digital information from all devices to the aircraft's sighting and navigation system. In addition, all of this data is stored in proprietary multi-channel recorders for playback or transmission. 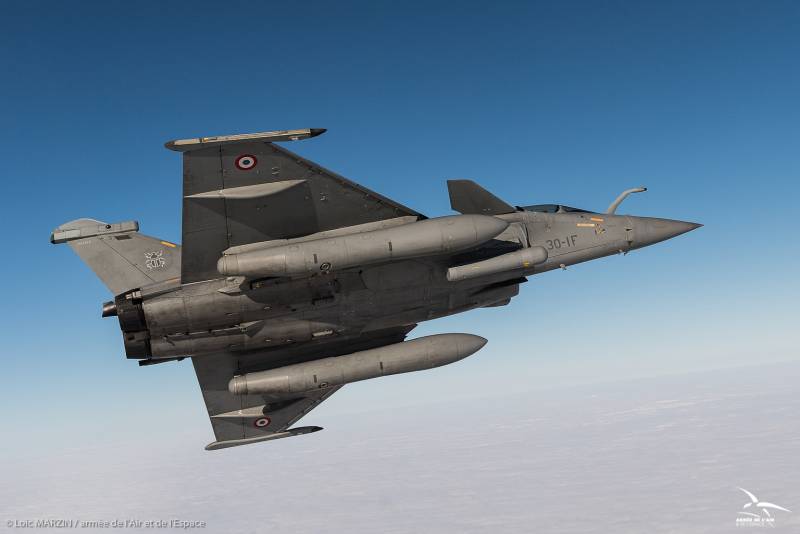 The TALIOS sighting container is designed to supplement the carrier's own means and allows it to search for ground / surface and air targets in the optical and infrared ranges at any time of the day and in any conditions. Elements of artificial intelligence are applied, providing analysis of incoming data and self-identification of targets, which reduces the workload on the pilot.

Automation also calculates the coordinates of the detected target and generates data for use weaponsand also transfers them to the ammunition electronics. Using standard communication and control facilities, the container can provide target designation to other aircraft or fire weapons.

The French Aerospace Forces decided to purchase new containers even before the completion of their development and testing. The first contract for 20 products appeared in October 2016 - almost two years before the official adoption. Later, we signed another contract for 25 containers. The first serial products entered the troops in the last months of 2018, and the completion of deliveries under existing contracts is expected in 2022.

According to open data, there are now 166 fighter-bombers in the combat composition of the French Aerospace Forces. This number includes approx. 100 modern Rafale, the rest are older Mirage 2000D. In addition, 42 Rafale carrier-based fighters serve in the naval forces. All of these aircraft have the ability to carry and operate the existing Damocles container, which is already in need of replacement. 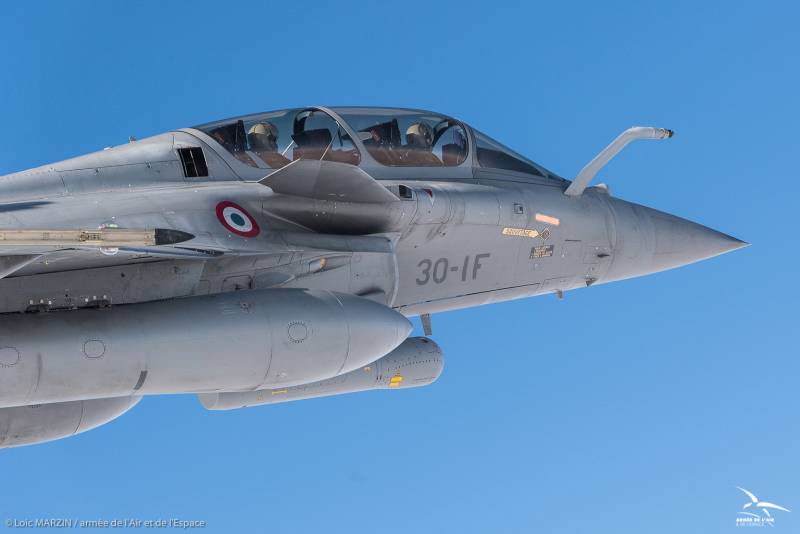 The existing orders for 45 sighting containers will only allow a few fighter and fighter-bomber squadrons to be re-equipped. Other divisions and units will have to use older containers for now. Apparently, in the foreseeable future, this issue will be resolved through new orders. As a result, TALIOS will push out and then replace the older Damocles.

The future of videoconferencing

The customer highly appreciated the new hanging sighting container. Improved image quality and increased observation range are noted. Due to this, the combat capabilities of the carrier aircraft increase while reducing the risks associated with enemy air defense. Integration into existing combined arms control systems is called an important advantage of the TALIOS product.

A decision was made to gradually equip all tactical units with TALIOS containers. aviation... It is also noted that such products will be ideal for use in combat operations Chammal (Middle East) and Barkhane (Africa). Achievement of initial operational readiness now makes it possible to fully use aircraft with new containers in real combat operations.

The re-equipment of French tactical aviation with the use of new targeting containers began just two years ago, and its current stage will be completed in 2022. Then, deliveries of new products are expected, which will allow equipping all divisions with them. In the same period, new types of aviation weapons will enter service and become widespread. Thus, by the second half of the twenties, the French Aerospace Forces will seriously increase their combat capabilities. However, so far we are talking only about new equipment and weapons - but not about promising aircraft.

Ctrl Enter
Noticed oshЫbku Highlight text and press. Ctrl + Enter
We are
Dangerous meetings of "Drying" and "Rafale F-3R" in the "torn sky" of Europe. What promises a new "surprise" from "Dassault"?An-12 in Afghanistan
29 comments
Information
Dear reader, to leave comments on the publication, you must to register.