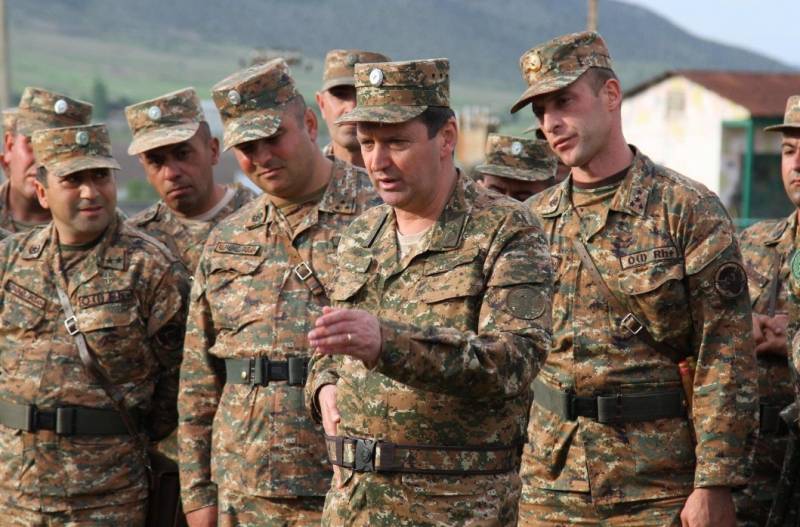 Fighting continues in Nagorno-Karabakh. It is obvious that the positions of the Armenian troops are becoming more precarious every day. And the reason for this is not only the significant numerical superiority of the Azerbaijani army.


In fact, the result of the fighting in Karabakh, which we see today, could have been predicted back in the summer of 2020. Azerbaijan did not particularly hide its military preparations: troops were drawn to the border with Nagorno-Karabakh, weapons were concentrated there, warehouses and communications were built. You didn't have to be a visionary to understand that Baku is preparing for military operations. However, the Armenian (Karabakh) intelligence for some reason, if not ignored this fact, then did not attach due importance to it.

Meanwhile, if Armenia and Karabakh relied on intelligence data, they would be able to more effectively prepare for the impending Azerbaijani offensive. For example, it would be possible to determine what types of weapons Baku will focus on and attend to countermeasures. First of all, this concerns Turkish-made unmanned aerial vehicles: apparently, Karabakh did not expect Azerbaijan to use them so actively and in such quantity.

It turns out that one of the critical mistakes of the NKR is either ignoring intelligence data, or a complete lack of effective intelligence work.

Air defense has become another weak point of the Nagorno-Karabakh army. Considering that the defense system of Karabakh developed in the 1990s, it is significantly outdated. If Azerbaijani aviation In the 1990s, it was rather weak and the air defense weapons that were in service with the Karabakh army were enough against it, but now we see a completely different situation. But the superiority of Azerbaijan in the air could well have been leveled if one took care of building a unified air defense system, and not keeping the air defense systems separate and virtually unconnected by the information field.

First of all, Azerbaijan uses unmanned aerial vehicles, which are especially effective in flat areas. The Armenian side cannot oppose anything to the Azerbaijani UAVs, especially if we consider that Turkey, which is the most important manufacturer of unmanned aerial vehicles in the region, provides direct military assistance to Azerbaijan. If necessary, Baku will receive additional UAVs and specialists to service them. Karabakh and Armenia have none of this.

Finally, one cannot fail to note the general stagnation of the Armenian and Karabakh armed forces in terms of the strategy and tactics of the defense of the region. While in Baku they paid great attention to the modernization of their armed forces, in Karabakh they lived with victories of the past, recalled the events of thirty years ago and fed themselves with myths that this time it would be possible to push back the Azerbaijani onslaught and almost completely defeat Azerbaijan.

Indeed, in the 1990s, the Armenians managed to defeat the Azerbaijani formations and defend the de facto independence of Nagorno-Karabakh, despite the numerical superiority of the Azerbaijani army. But now the situation is completely different: Azerbaijan has changed a lot, its financial capabilities have grown, ties with allies have strengthened. Probably another mistake of the Armenian side is ignoring the growth of Azerbaijani power. And, perhaps, there is also a strange hope that Russia will immediately intervene militarily in the conflict.

By the way, about the ties with the allies - this is another fatal mistake of the Armenian side. Despite the huge diasporas in countries such as Russia, the USA, France, Karabakh and Armenia, they actually found themselves alone in their confrontation with Azerbaijan. Prime Minister Nikol Pashinyan, shortly before the conflict, spoke from an anti-Russian position, thereby forgetting who in fact is the guarantor of security in the Transcaucasus. Now we see the open support of Azerbaijan from Turkey and Pakistan, the supply of weapons by Israel.

As for Armenia, both Russia, the United States and France limit themselves only to statements about the need to return to the negotiation process. There are no French special forces and American drones in Karabakh, no statements by Vladimir Putin about helping "Christian brothers" (and these statements would look strange today), but Azerbaijan is fully receiving military-technical, military, and moral support from its allies ...

As a result, we see a sad situation: the Karabakh army continues to suffer serious losses, the Azerbaijani troops are gradually advancing further and further. Only third forces can correct the current situation if they intervene in the conflict. But so far, as we can see, Moscow is not eager to stand up like a mountain for Pashinyan. And the incumbent Armenian prime minister is also to blame for this.

And the above-mentioned mistakes the army of Nagorno-Karabakh with the support from Yerevan could have avoided. Unless, of course, the current Armenian leadership has an interest not to lose control over the territories of the unrecognized (primarily not recognized by itself) republic.

Ctrl Enter
Noticed oshЫbku Highlight text and press. Ctrl + Enter
We are
What you didn't want to know about EnglandErrors of Armenia and the success of Azerbaijan ("Journal of Turkish Weekly" Turkey)
201 comment
Information
Dear reader, to leave comments on the publication, you must to register.