Tactical triaxial vehicle. The history of the birth of KamAZ-4310 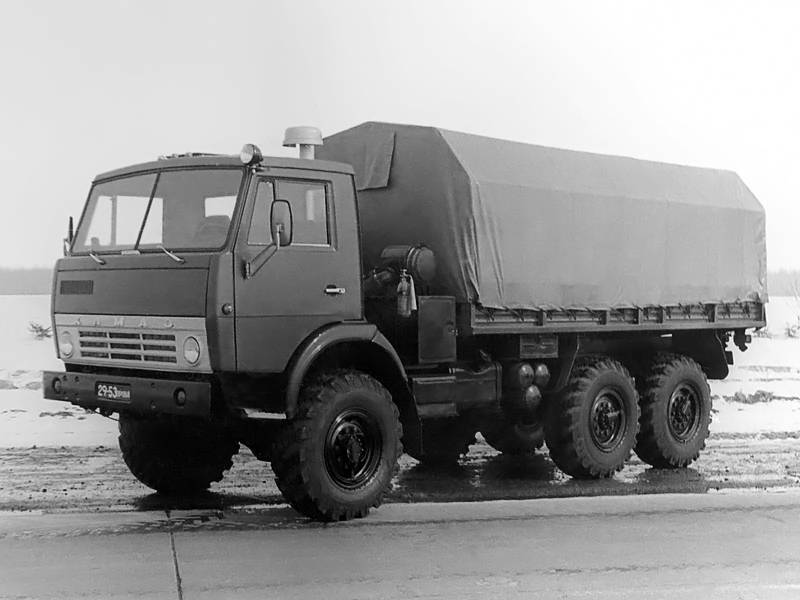 In the 60s in the Soviet Union there was a need for trucks capable of taking on board up to 8 tons of cargo and towing the same amount in a trailer. The Minsk Automobile Plant could no longer fully cope with this task, and it mainly produced cars with a carrying capacity of more than 10 tons. A lot of forces and resources were taken away from Minsk residents by specialized projects for the Ministry of Defense.

As an option, we considered the possibility of loading ZIL with the production of heavy trucks, but the enterprise was barely enough to produce a line of 5-ton 130/131 trucks. It was decided not to expand and modernize the existing production, but to create it at a new location. At the same time, they tried to localize the production of truck components at one plant as much as possible.

This was largely the result of strategic planning during the Cold War. Since the Great Patriotic War, they remembered how production was disrupted tanks and other equipment due to interruptions in supplies from subcontractors. Therefore, it was decided to build a motor plant with an assembly line.

In 1969, in Naberezhnye Chelny, the first stone was laid in the foundation of a new mega-plant, which eventually received the name "Kamsky Automobile". For its time, it was the world's largest full-cycle truck factory. KamAZ was supposed to almost 100% assemble cars from its own components.

This was a unique and obscure feature of the enterprise for capitalism. Young people from all over the Union took part in the construction of the enterprise, and many design bureaus were involved in the development of the main product - the truck.

The main creator of the main model for the conveyor was the flagship of the Soviet automotive industry - the Moscow plant named after I.A.Likhachev. In the course of work, the Yaroslavl Motor Plant created at least twenty variants of the power unit, consisting of a diesel engine, a clutch and a gearbox. The Odessa Automobile Assembly Plant was responsible for the development of semi-trailers for the KamAZ mainline tractors, and the Minsk Automobile Plant developed a dump truck for actual competitors. The head design bureau for trailers from Balashov, Saratov region, was engaged in its core work - trailers.

The development of the truck was started simultaneously with the start of construction of the plant - in 1969. The resolution of the Central Committee of the CPSU and the Council of Ministers on "Construction of a complex of factories for the production of trucks and heavy-duty road trains" was issued back in 1967 and there was not even a word about a site in the Tatar ASSR. Initially, they chose between Kazakhstan and Ukraine, but in the end the choice fell on Naberezhnye Chelny. The mega-plant was supposed to be called "Batyr", that is, "Bogatyr" in Tatar. 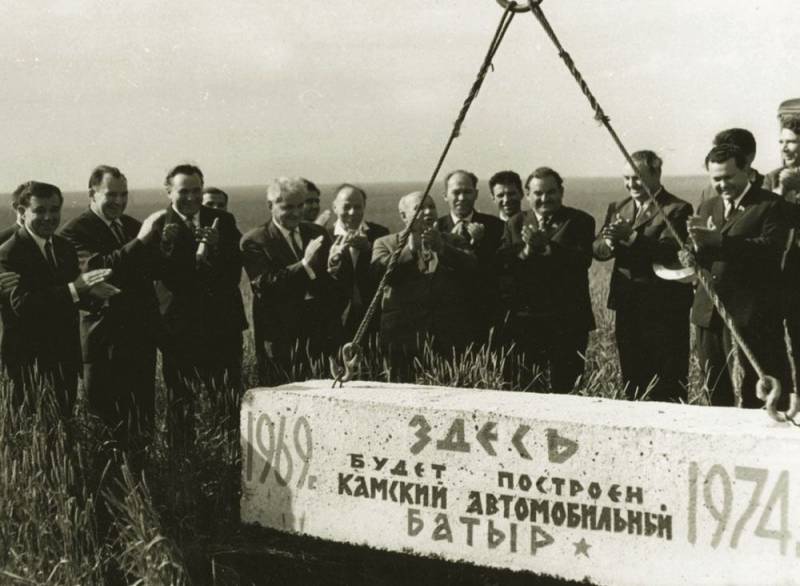 A photo that speaks for itself. Source: kama24.ru
Unfortunately, they could not create a modern automobile plant on their own - even then the backwardness of domestic machine-tool building and industrial construction affected. A similar problem was with the Volzhsky and Izhevsky automobile plants. In the first case, an Italian from FIAT came to the rescue, and in the second - the French from Renault and Japanese contractors. It is worth remembering that Izhevsk Automobile was subordinate to the Ministry of Defense Industry, and this created particular difficulties in working with capitalists from abroad.

Initially, the USSR did not plan to develop a truck from scratch and until the very beginning of the 70s they were looking for a partner in the west. Recall that at this time at ZIL, a model for the plant under construction was already in full swing. Obviously, if the negotiators succeeded, the developments would simply be put on the shelf, or (in the most optimistic version) put on the conveyor instead of the ZIL-130.

Negotiations with Daimler-Benz AG were among the first. The Germans were offered a contract for the licensed production of trucks and the construction of a production base in Naberezhnye Chelny. But the bosses from Daimler-Benz were not satisfied with the financial conditions and losses from the sale of Soviet trucks to third countries. In Stuttgart, they wanted to control all export deliveries of licensed cars from Naberezhnye Chelny, but this, in turn, did not suit the Soviet leadership. History the Germans returned theirs - modern KamAZ is largely based on German technologies and partially belongs to Daimler-Benz.

By 1970, the portfolio of potential partners of KamAZ also included Ford Motor Co. Even Henry Ford II himself managed to visit the USSR and admire the scale of construction. But this time the deal was thwarted by the US military, who feared the appearance of a tactical military truck from the Soviet Union, which the new plant would produce in the tens of thousands a year.

The Pentagon and the CIA did not allow the USSR to conclude a deal with the American Mack Truck Inc. The reason was similar - to prevent the Soviets from obtaining modern dual-use technologies. In Langley, by the way, they very carefully followed the construction of the plant in Naberezhnye Chelny and calculated the potential of the enterprise.

In Truck Press, President Nixon is quoted as saying, based on an obvious CIA delusion:

"Kamsk trucks can be used to transport heavy military cargo, but they are not designed for military needs and are more likely to be used in industry and agriculture."

In general, the Americans did not agree to sell a license for the production of a truck, but they gave the go-ahead for the supply of production equipment. 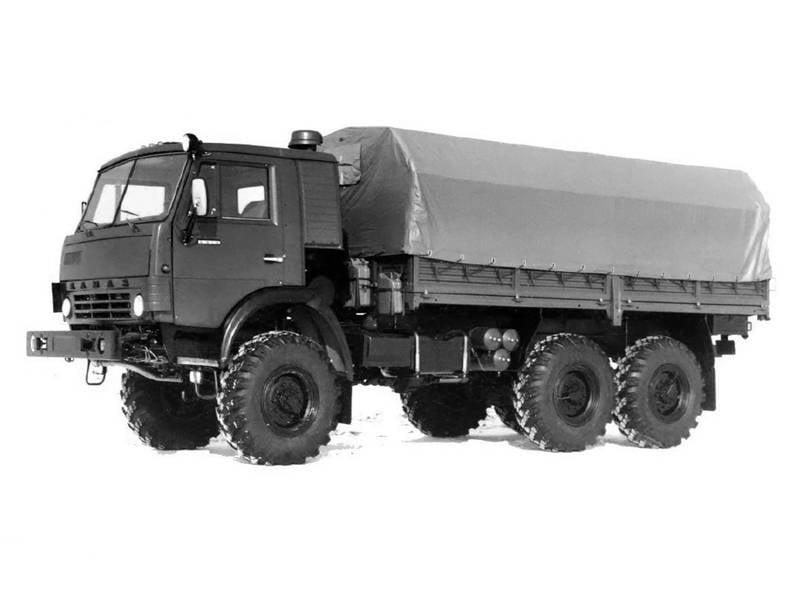 KamAZ-4310 in the classic form. Source: autowp.ru
According to the most plausible calculations (we most likely will not know the real numbers), the Kama Automobile Plant cost the Soviet Union 4,7 billion rubles. A large part of this money (about $ 430 million) went to the United States to pay for industrial equipment: riveting lines for frames, gear cutting machines, foundry and much more.

When the second line of the plant went into operation in 1982, up to 30% of the annual production, that is, about 45 thousand vehicles, went to the needs of the USSR Ministry of Defense. And the most charismatic of them was KamAZ-4310, which first came out (to spite the CIA) from the gates of the plant on March 28, 1981.

When ZIL in 1969 received the task to quickly develop a car for the Kama plant, the design bureau was already in full swing building the concept of a similar truck for its own conveyor. The car bore the name ZIL-170, and all the developments on it were actually given to KamAZ. The head of the Zilovsky design bureau of heavy vehicles V.A.Vyazmin wrote about this:

“We gave our design groundwork to the Kama project - the ZIL-170 car. We considered it a great success that the work did not have to start from scratch. There is a certain basis, albeit the most general one, there is an embryo from which a design solution must germinate. This means that the country will get a new truck sooner. And what brand will be attached to its radiator grill (ZIL or KAMAZ) is not so important, in any case the brand is ours, Soviet ”.
The chief designer of the truck project adapted for KamAZ was appointed ZIL engineer, Doctor of Technical Sciences A. M. Krieger. In total, ZIL developed a whole line of trucks, of which all-wheel drive vehicles were of the greatest interest to the military. These were flatbed tractors with a 6x6 wheel arrangement for operation as part of road trains: KamAZ-4310, KamAZ-43101, KamAZ-43102, KamAZ-43103, KamAZ-43104, as well as all-wheel drive truck tractors (6x6) for work as part of KAMAZ road trains -4410. 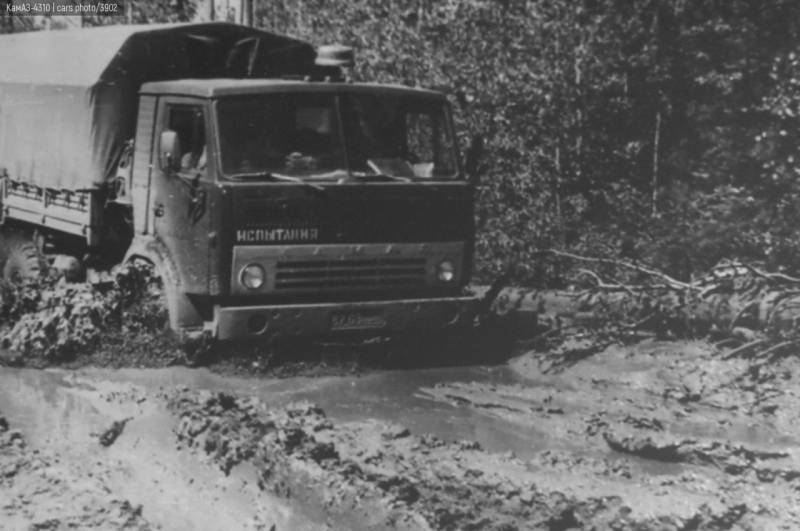 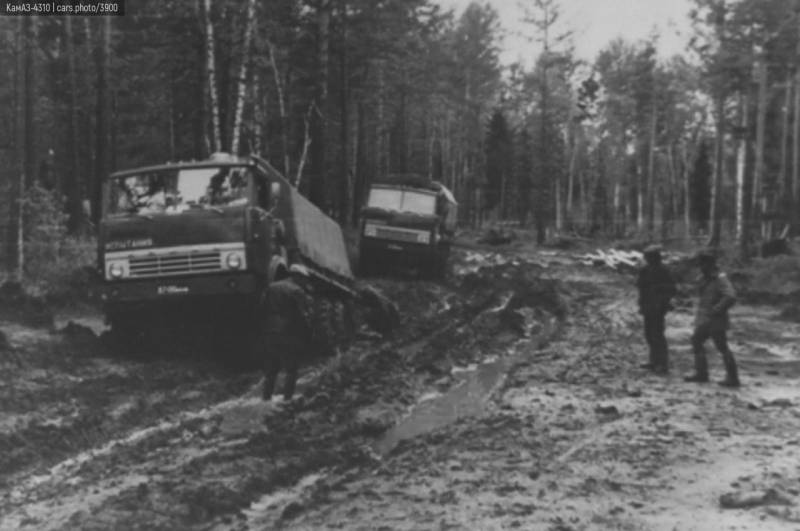 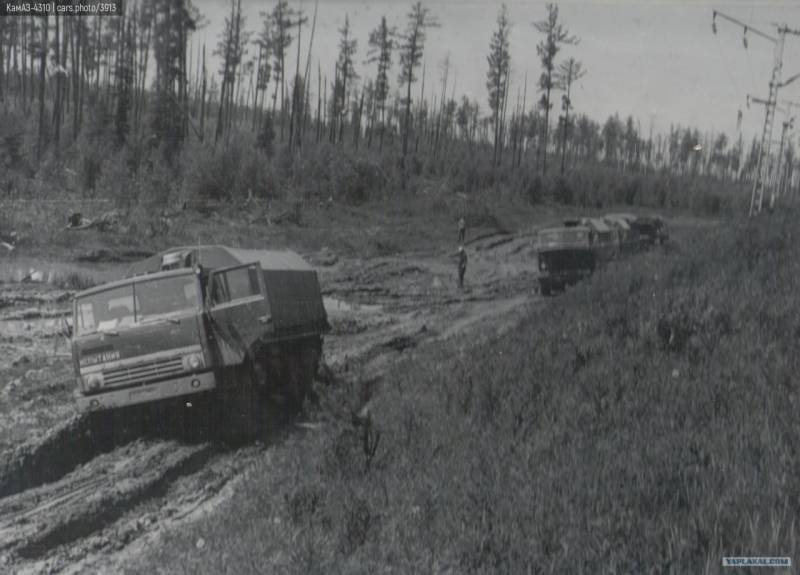 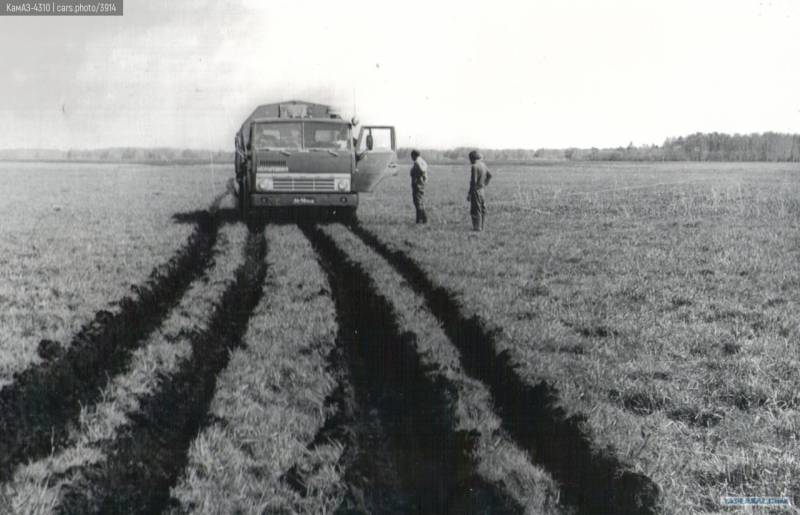 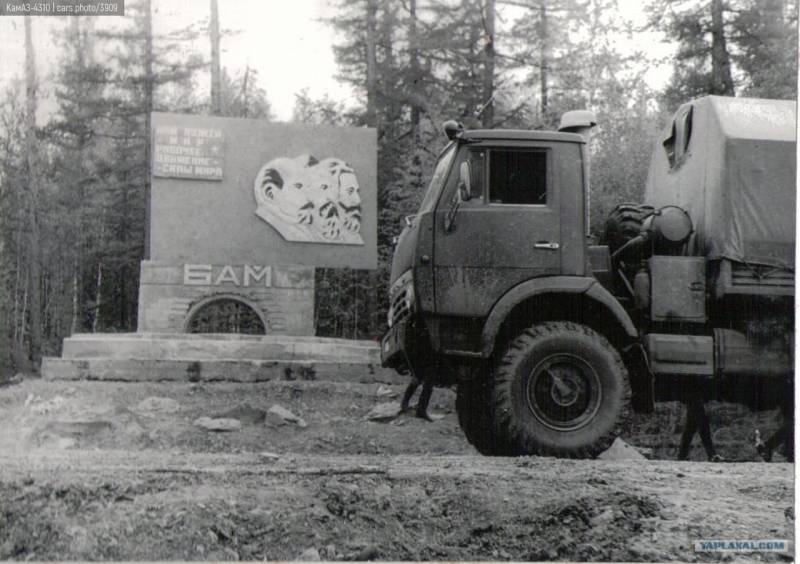 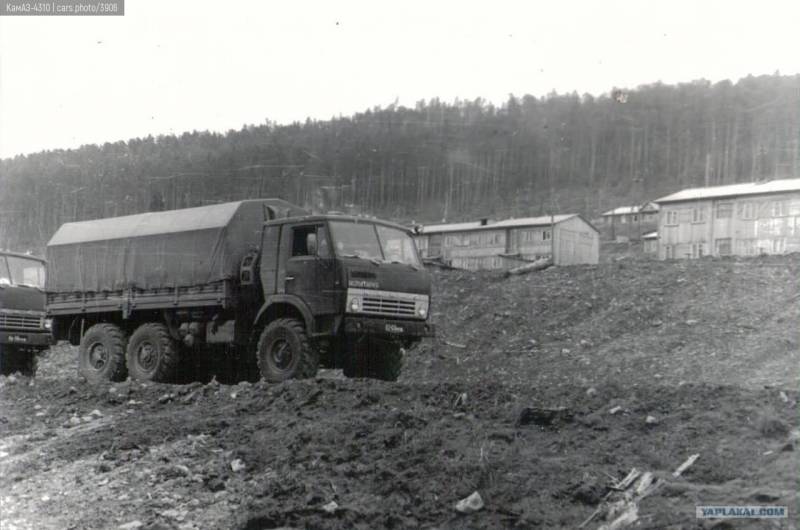 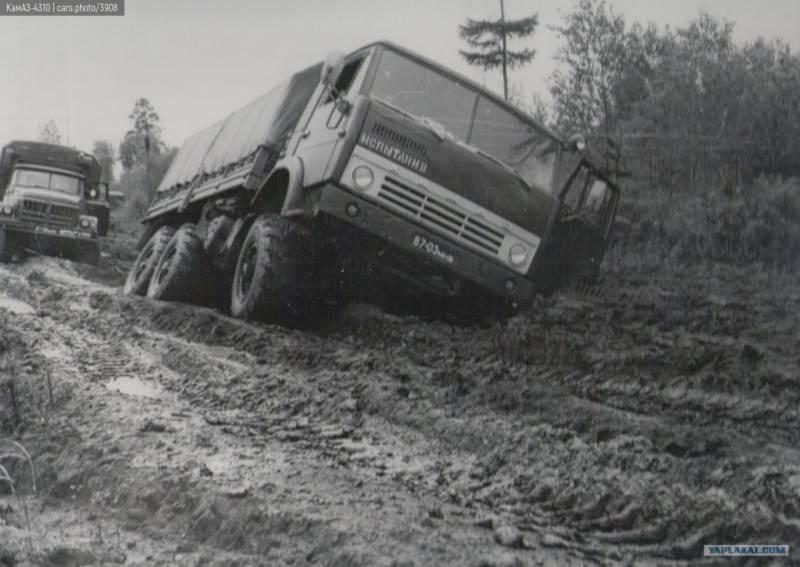 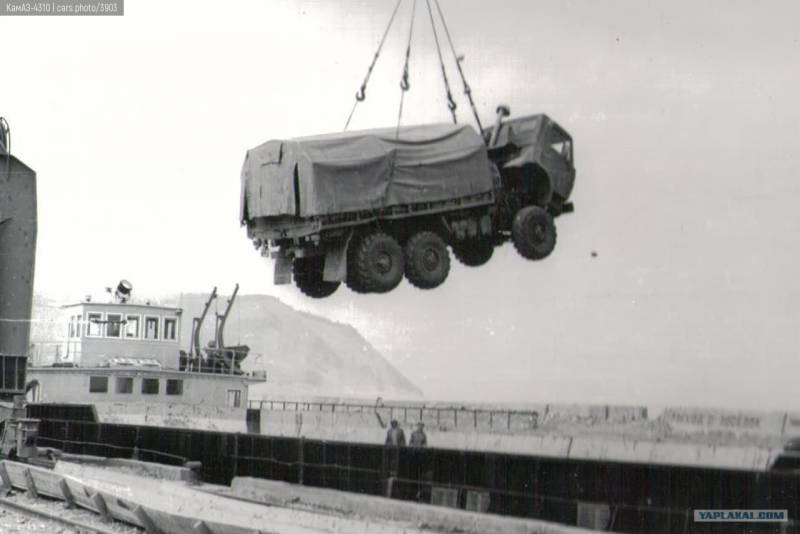 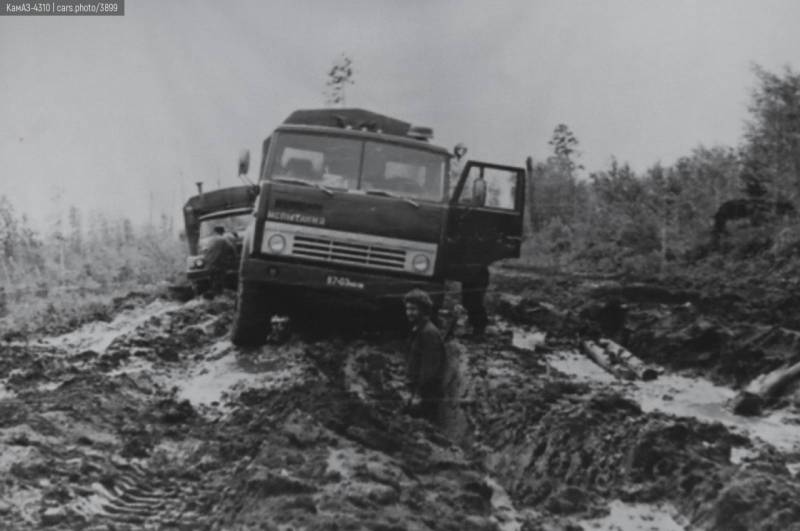 Tests on the route Moscow - Chita - Irkutsk - Moscow. Source: ru.cars.photo
The KAMAZ employees who received "turnkey" cars from Moscow only needed to organize production at a new enterprise. From 1972 to 1976, the first eight KamAZ-4310 trucks in various designs were tested at the factory. From April 1976 to March 1977, four all-terrain vehicles were subjected to interdepartmental acceptance tests. It was a difficult race on dirt roads along the route Moscow - Ashgabat - Moscow, during which the cars covered more than 37 thousand kilometers. There were cold tests in the vicinity of Chita - the temperature sometimes dropped to minus 42 degrees. 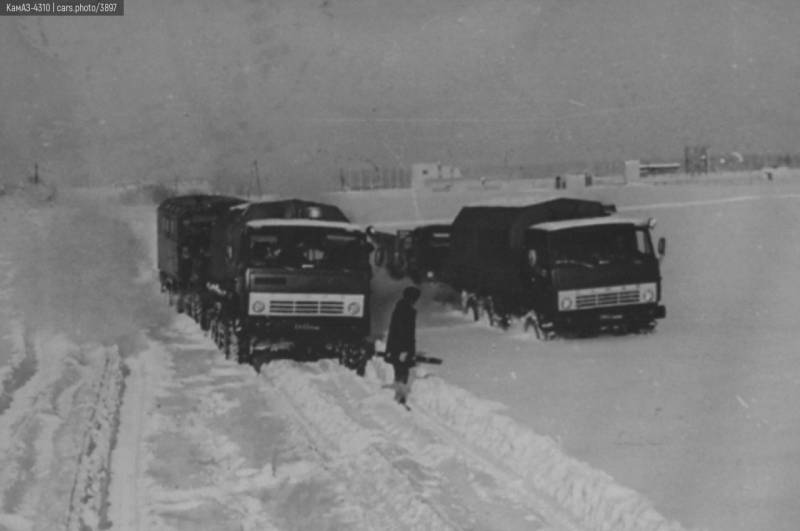 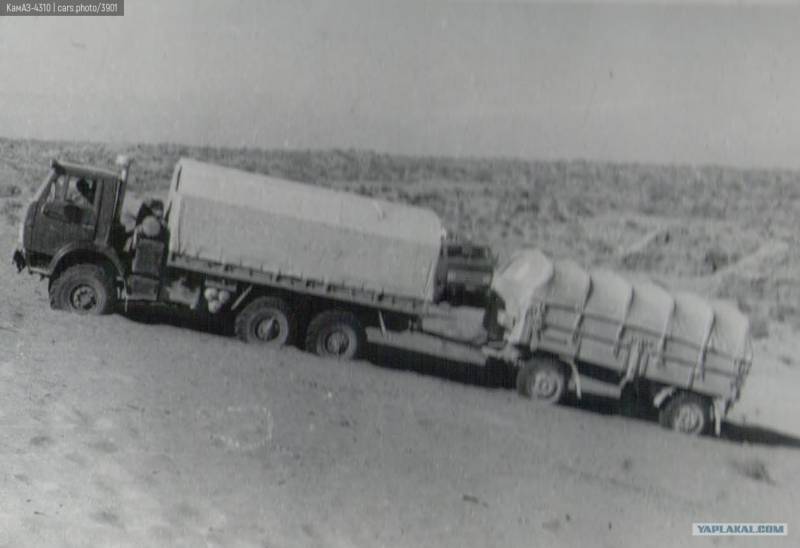 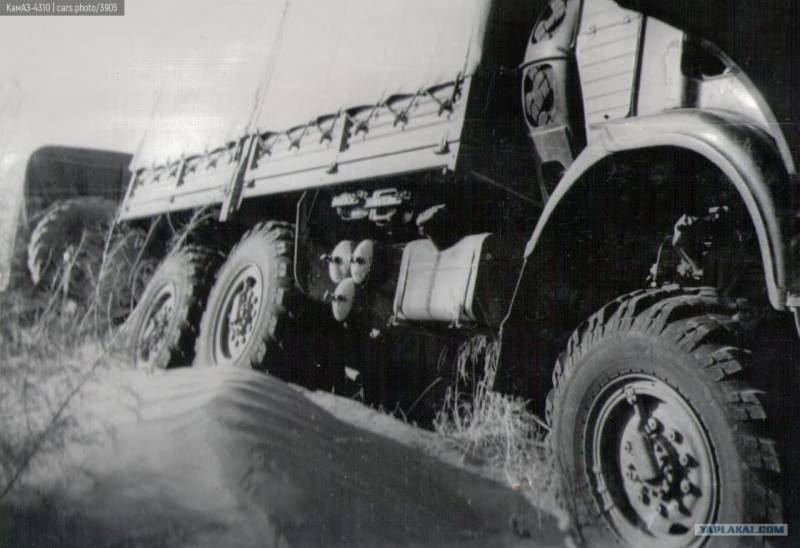 Tests by cold and heat. Source: ru.cars.photo
The testers praised the new ATVs. On the run, the prototypes were accompanied by several ZIL-131 and Ural-375, with which the Kama cars were involuntarily compared. According to eyewitnesses, after a hard day, the drivers jumped out of the ZIL and Ural cabins squeezed like lemons, which seriously contrasted with the cheerful state of the drivers of the experimental KamAZ trucks.

The sprung cab was spacious, airtight enough, and the seats were cushioned. During the tests of all-terrain vehicles, the shortcomings of the YaMZ-740 engines were revealed, which were promptly eliminated in Yaroslavl. For example, on a steep climb, crankcase oil could enter the air intake. We also had to replace the structural steel of the front axle beam - on one of the cars it burst when crossing the dune. In Central Asia, all-terrain tires have proven to be unreliable. The testers say that they changed six sets of four KamAZ trucks and because of this they had to call a meeting from Moscow with spare tires. According to the results of the race, the Research Institute of the Tire Industry made the necessary changes, and the "shoes" for the military truck began to correspond to its purpose.

Ctrl Enter
Noticed oshЫbku Highlight text and press. Ctrl + Enter
We are
ZIL-131. The last hero of the plant named after LikhachevMulti-axle rocket carriers
59 comments
Information
Dear reader, to leave comments on the publication, you must to register.