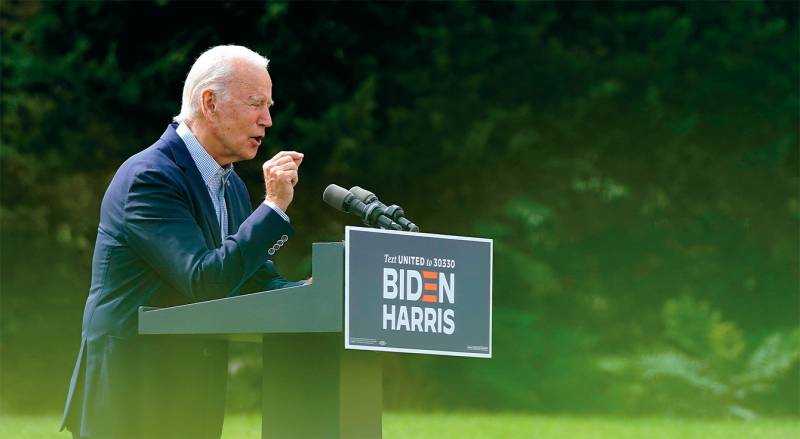 Elections in the United States in regular time generally end in a draw. There is no decisive victory. After ballot boxing in favor of Biden, election results in several states were rigged. The voting and counting procedure in the United States is archaic and allows for manipulation and falsification. Previously, both Republicans and Democrats used this. Thus, in 2000, Republican George W. Bush bypassed Democrat Al Gore. More voters voted for the democrat. But the matter was decided by a recount at the decisive headquarters in Florida, where Bush's brother Jeb Bush was the governor.

In normal times, they turned a blind eye to such machinations. Like, it's a matter of everyday life. Next time the game will be in our favor. But now the situation in the United States and in the world has changed radically. The crisis turns into a disaster. The elites in the United States are divided, as are the people. Fierceness has reached its limit. It is obvious that at first both sides will try to crush the enemy in the legal field. The States are a country of lawyers. But when Trump does not succeed, or vice versa, it turns out, to challenge the stuffing and forgery of the Democrats, then the conflict will move to a new level. The political struggle can develop into an armed one. Both Trump and Biden can urge their supporters to disobey. And the more severe the crisis, the more likely it will be. Now or a little later. There are already trained fighters on the side of the democrats - left-wing radicals, antifa, black racists. For Trump - the armed "deep people", the white core of America.

The logic of the global crisis is tough. Everything is at stake. The systemic crisis can be overcome by seizing someone else's resource base. Democrats and the financial, global capital behind them want to preserve the post-industrial structure (service economy). Republicans and industrial capital for a breakthrough into a new industrial, productive way. To do this, the States need to concentrate resources, get rid of huge spending on maintaining the status of a superpower - support of NATO allies, the maintenance of bases and military contingents throughout the planet, etc.

The crisis of capitalism, the post-industrial structure and the consumer society leads to the destabilization of the management system. The system cannot be controlled by the old methods and methods. Hence the operation "pandemic", a quarantine war against the economies of countries and society. The simplest methods of management remain - violence, terror, which is accompanied by information rubbish about the need for universal "security". The victory of the Democrats and Biden is an increase in terror. The entire planet will be driven into digital Auschwitz and Dachau. Total digital control over the entire world in general and over the individual in particular. For example, one of the elements of this system is digital money. “Wrong” actions of a person can be suppressed by cutting him off from finances. Another element is the social rating, which is already being introduced from kindergartens and schools. "Bad guys", say, who do not believe in the current media tales of the "pandemic", will become outcasts in the new society. Although any sane person understands that cancer, the epidemic of tobacco smoking, alcoholism and drug addiction, is many times more dangerous than the coronavirus. As well as the collapse (of the "optimized" health care system), which we are now seeing.

For ordinary people and Russia, the victory of the Democrats in the United States means a sharp deterioration in the situation. Increased "viral" terror. Biden intends to introduce a general mask regime in the United States. All democracies on the planet will follow the United States. Trump promised to end this coronavirus hysteria, which is hitting the US economy and ordinary Americans. An attempt to shift their costs to the whole world, the periphery of capitalism. Biden has already noted that Trump did not use all the possibilities of sanctions against Russia. We are talking about the complete possible blocking of various energy projects, foreign exchange reserves of the Russian Federation in the West, etc. Thus, the victory of the Democrats is a continuation of viral hysteria, the development of digital concentration camp programs. A new blow to the world economy, people (including Russia). Growth of poverty and excess mortality.

Everything that we observe in the world (and the excesses in 2020 are just the tip of the iceberg) is a world war in its purest form. It is necessary to get out of the crisis of mercantile and usurious capitalism (based on loan interest), the post-industrial structure, the West, the consumer society and the management system. The question arises - how? The old method is a big war. It burns away most of the contradictions, destroys the socio-economic infrastructure, allows the winners to share the "skins" of killed bears. This allows you to write off debts, restart the economy, production, and get new technologies. The impoverished population is obedient and ready to work cheaply and refuse social guarantees.

The current crisis cannot be channeled into an old type of world war. Nuclear missiles can bury not only ordinary people, but also the elites accustomed to comfort and overconsumption. Therefore, we had to launch a lightweight version - information aggression, "pandemic", which had been prepared in advance at the information level. For many years, people were frightened by "resident evil", "zombie apocalypses, etc. They carried out field tests - bird and swine flu, Ebola, etc. Already in 2014, the American leader Obama announced the global threat of Ebola. It was a trial balloon. Instead tank breakouts, raids aviation and missile strikes - a "pandemic". True, in some places, locally (as in Syria and Karabakh), old methods are used.

Financial capital, globalists and democrats are promoting their project to overcome the crisis - a "digital concentration camp". In the event of Biden's victory, quarantine measures across the planet will be intensified. The time lost during the Trump presidency will be making up at an accelerated pace. The entire planet will be driven into digital Buchenwald. Discontent and protests will be extinguished by the most brutal methods, terror. Under the slogans of universal security, the era of liberal fascism will come. "New world order", as Hitler dreamed.

The victory of Trump (the industrial, national capital behind him) leads to the creation of a "multipolar world", the elimination of the petrodollar system (the base of the financial oligarchy) and the division of the world into currency zones. This will ease the pressure on people. During his second term, Trump will need to create and consolidate the foundation for the transition to a new technological order. Industrial capital will not be in a hurry; therefore, it does not need mass terror.

At the same time, it is necessary to realize that America under any president is our geopolitical adversary. No illusion needed. The industrial capital behind Trump, like financial capital, is alien to humanity. It just makes no sense for him to rush, crush people's resistance at any cost. Under these conditions, Russia can get a window of opportunity. Fully restore national sovereignty (autocracy), cultural, financial and economic independence. Carry out new industrialization, genuine national programs to restore demographic potential (the country is simply dying out), science, education and health care. Return to your Russian path - the rule of truth and conscience.

Ctrl Enter
Noticed oshЫbku Highlight text and press. Ctrl + Enter
We are
A great interview with Sergey Lavrov: about Ukraine, Obama and IranWhat you didn't want to know about England
195 comments
Information
Dear reader, to leave comments on the publication, you must to register.